WHAT A GREAT NUMBER! 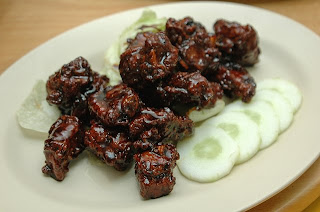 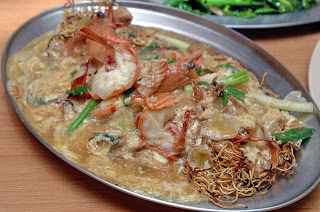 Cut to the chase with 52's Claypot Curry Fish Head 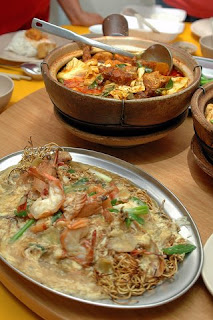 Ever since we were introduced to this outlet, it has quickly become a favourite haunt. Not only does the restaurant serves good food, the pricing is incredibly reasonable!
From the outside it looks like just another corner single terrace house - few would actually have any inkling it's actually a no-frills Chinese restaurant that holds plenty of delicious secrets. Hot sellers here are its Fish Head Curry, Lightly Deep-fried Tilapia, Salt Baked Chicken Wings and Stir-fried Sang Meen with Fresh Water Prawns. And that's barely scratching the surface - the lady boss told us their other specialities include Hakka braised fried pork (char yoke), vinegared pork trotters, claypot ribs with yam, butter squid and hot plate hor fun...are you drooling already?
The Curry Fish Head comes piping hot in a claypot, filled with ladies fingers, brinjal, long beans, cabbage, beancurd puffs and fleshy pieces of fish head in a fiery orangey-red gravy that goes really well with plain white rice. A small portion here can easily feed 3-4 persons or more if you have other dishes thrown in. You can also ask the chef to substitute the fish head with tilapia chunks but it doesn't have quite the same 'fun' as digging and searching for that elusive piece of fish meat off boney creviches.
Even though the cook more often than not tends to overcook the Ribs in Beer Stout Sauce, the shortcoming is easily forgiven thanks to the bewitching, caramelised sauce that clung and enveloped the ribs completely.
When it comes to Fresh Water Prawn Noodles or Sang Har Meen, nothing quite comes up to our gold standard - Sang Kee or what KL-lites used to know as the Tai Shee Tau (under the big tree)...Having said that, 52's version is still above average and perfect to assuage any prawny noodles craving! The crustaceans are of a decent enough size and I would have preferred the fresh egg and wheat noodles to be thicker but heck, it's as good as it comes. Generously doused with a rich, sublime eggy sauce that's not too starchy or watery, the crisp noodles are adequately 'soaked', rendering it nicely chewy but not soggy.
The kids usually go wild over the Chiu Yim Kai Yik or Deep-fried Salted Chicken Wings but you must remind the chef to omit the chopped bird's eye chilli that gets sprinkled on top together with spring onion. Forget that at your own peril - you don't want to go into crisis mode, trying to douse little numb tongues and soothe teary tots! The Claypot Taufoo is another kid-friendly dish which comes chock-a-block with local or Japanese beancurd cooked in a thick, oyster sauce gravy, chopped baby corn, snap peas, diced carrots, mushroom, assorted seafood and sliced pork.
So if you are ever in the vicinity of Semenyih, 52 is a number you should remember. The outlet is easily located along the early stretch of Jalan Sungai Lalang, the same road leading towards Nirvana Memorial Park. Just don't bother going on a Monday since it's their rest day.
Restoran 52
52 Jalan Sungai Lalang
Semenyih Negeri Sembilan
Tel: 87238733
at March 29, 2007 No comments: