NOODLES TO DOODLE OVER

On scorching hot days, nothing beats a bowl of cold soba noodles! Found one recently at a little Japanese outlet known as Hokano in Damansara Uptown. The place also serves reasonably priced set lunches and a variety of imaginative sushi rolls. But that's another story altogether. 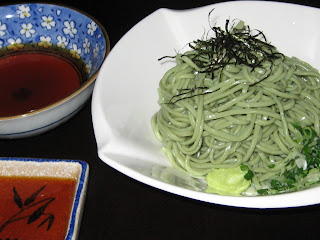 I find the easiest way to revive jaded tastebuds (well, mine at least) is to eat something spicy or robustly flavoured. For some inexplicable reasons, I have this urge for mee rebus and mee bandung. So imagine how esctatic I was when I stumbled upon this nondescript outlet enroute to Kajang town which sells Mee Bandung Muar. The outlet - D'Muar World (inspired by Akademi Fantasia's hottest winner of all time, Mawi no doubt) has always had lots of cars parked in and about its vicinity so we suspect the food must be pretty good. Once I had my first bite of the mee bandung, you can almost see one of those big cartoonish speech balloons popping up above my head with the word 'Sedaaaapppp!!!' in it. The gravy is thick and richly flavoured with prawns and spices with a just hint of sweetness. Super yummy! 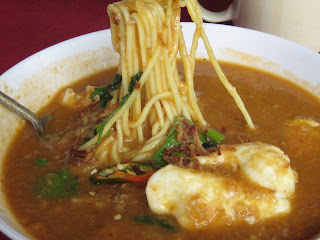 Nowadays, green is in but how many of us really conscientiously bother to adopt a low-carbon, eco-friendly diet? My token efforts amount to nothing more than buying and using that occasional organic wholewheat flour, sea salt and veges. Yeah, I've got a looooong way to go before I become a full-fledged greenie. But I must say I felt really good after eating Woods Macrobiotics' 5 Energy Somen Noodles. Don't they present a pretty picture? Made from organic wholewheat flour, their different coloured noodles are resultant from ground organic soya, bitchotan charcoal, green tea, beetroot and carrot powder. Each type of noodles supposedly helps to strengthen the heart, liver, kidney and stomach. I'm all for eating my way to good health! 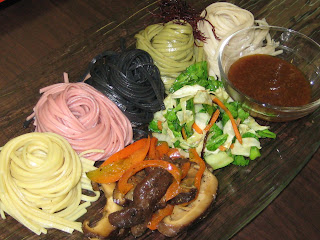 Being the chilli fan that I am, Mee Siam naturally is one of my all-time favourite noodle dish. Toast & Toast Cafe in Balakong serves a decent version which is spicy enough. The rice vermicelli is also not too dry which is nice. Actually I can dish up a pretty mean version myself but slothfulness and work deadlines have prevented me from venturing into the kitchen. So the one at Toast & Toast will have to do for now ;-p 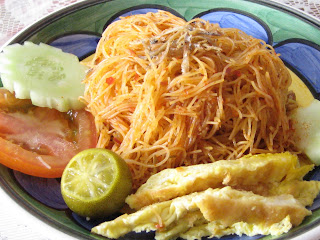 Nothing reminds me of my childhood more than Hokkien Mee. Believe me, this dish of ubiquitous noodles is bound to make its appearance come any tai yat chee or Chinese festivals in my grandparents' house alongside the park chit kai (white-cut steamed chicken) and popiah (spring rolls). Mom is a consummate expert at dishing this black soya sauce drenched noodles but she has since retired from culinary duties years ago! So what's a Hokkien gal to do but resort to search for alternatives? Luckily, the Klang Valley (especially in PJ - why is that??) still has 2-3 stalls that offer a decent version - not quite my Mom's gold standard but heck, beggars can't be choosers now eh? Our favourites? The no-name stall in Jalan Pudu (average wait 45 min-1 hour!), Millennium Eighty Six CoffeeShop and O&S Restaurant. 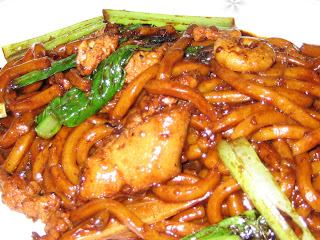 Last but not least, pasta is fast becoming a staple in our household. Especially with the little one who eats it faster than you can say Yee Meen! Don't know if it has anything to do with the fact that Italians have cheesey sauce ... Our little weekend luxury treat is to pop into Susan's Bistro at Bandar Mahkota Cheras (yes, that famous no-toll access road area which saw a battle royal between big money-making toll company and 'rakyat' months ago) for Spaghetti Carbonara. Creamy, unctuous yet oh-so-delicious, it takes Herculean effort from a light eater to finish a singular portion! But who's complaining eh? 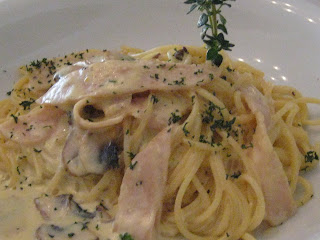