Our current hot sweltering weather simply demands cool solutions for soothing relief from the intense heat! What better way to do it than with these sweet and splendid treats! 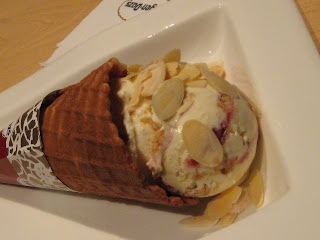 Shall we Haagen-Dazs? We wish the cafe would make more effort though as its single scoop presentation leaves much to be desired. Come on, surely someone at HD can rack up on the creativity that befits the brand's premium stature? Heck, at RM13 it's not too much to ask for is it? 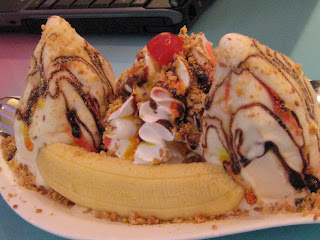 Even Movenpick succeeds in creaming the competition with this colourful ensemble. Granted the ice cream was a tad soft and melty but the way it was presented left us feeling there's some value in it! 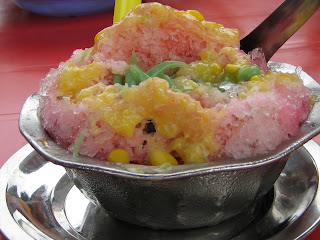 Ice-cream doesn't melt your heart? Then how about the ever-popular Ice Kacang? Few Malaysians can resist this slurpilicious mound of shaved ice filled with nuts, cendol strips, red beans, black grass jelly dices and creamed corn, drenched with evaporated milk and rose and palm syrups. When the heat is on, this yummy creation is the ultimate nice ice treat!
at August 19, 2008 No comments:

The Rib Shop started the ball rolling when it boldly ventured into the non-halal territory by offering porky dishes to go with its extensive wine range in Damansara some years ago. Then came El Cerdo which had KL-lites all abuzz over its Spanish suckling pig and pork-centric delights.

It didn't take other restaurateurs to figure out there's a sizeable non-Muslim clientele who are just waiting to gobble up something different apart from the usual staples of Bak Kut Teh, Roast Suckling Pig, Roast Pork, Char Siew, etc.

So when I was invited to a special dinner headlining the Cochinillo Segoviano or roast Spanish suckling pig, how could I refuse? Bruno's Restaurant & Bar turned out to be a relevation of sorts - secreted at one corner of Jaya 33, this eatery is started by the same lady owner who runs the much-talked about Food Foundry.

What's good to eat here? Well, Chef Franky Chin who used to work with the Four Seasons in Singapore and then spent some time working/studying in the UK, is a dab hand when it comes to serving up Mediterranean, Italian and Spanish-style delicacies. 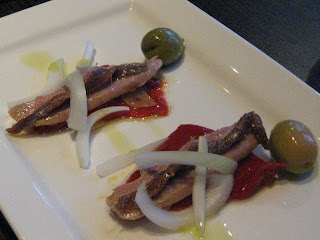 Starters to get you off on a head start include Piquillo Peppers with Anchovies with Tuna Belly (top) and White Asparagus with Iberico Ham and Romesco Sauce (below). 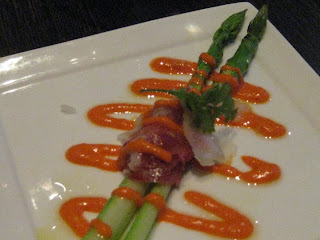 For those of you who have no inkling of what's so special about the Iberico pig, this Spanish black-haired breed is prized by gourmands for its tender, tasty meat. Also the pigs can be considered organically raised as they are allowed to roam freely, feeding on grass and acorns from the plush plains in Spain. Yeap, no growth hormones, antibiotics or chemical-laced feed for these precious piggies.

How is it different from the Cochinillo Segoviano? Well, the roast Spanish suckling pigs are prepared using 20-day old piglets which are suckled exclusively on their grain-fed mothers' milk. It is a classic speciality from the province of Segovia since the pigs are bred specifically in this area under strict regulations of the relevant certification bodies in Spain.

Chef Javier Sancha who is a third-generation expert when it comes to the Cochinillo Asado (roast suckling pig) at his family's famed El Pastor restaurant back home, was brought in to demonstrate how the speciality is prepared for local diners to sample. In essence, the piglet is roasted in a wood-fire oven for 2-2.5 hours with just a sprinkling of salt and nothing more. 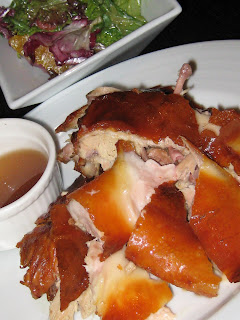 It is interesting to find that the skin is thinner than our local Chinese suckling pig's and definitely yields a greater amount of tender, juicy meat. Those who are aversed to the strong milky aroma of dairy products may find the meat a bit of an acquired taste. Not surprising really since the little piglets had nothing but milk in their diet from day one. 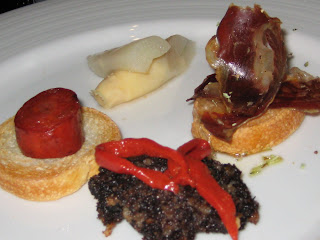 Earlier we were also treated to an El Pastor Tapas Medley - each was a truly delightful morsel that remained in memory even after it was eaten. The other speciality featured for the special evening was Lechazo Asado (roast suckling lamb), an equally delectable Castillian delicacy. 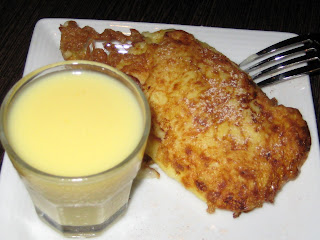 Dinner rounded up on a luscious note with Natilla and Leche Frita, a superbly creamy deep-fried pancake and decadent pudding.

I have been back since for a heartily satisfying lunch. Now I can't wait for Bruno's to bring on the bacon since the outlet will be starting its weekend brunch soon!

Make haste and make a pig of yourself at Bruno's if you are into porky pig!