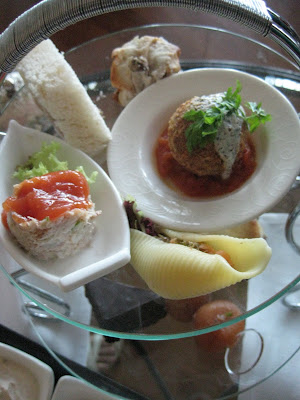 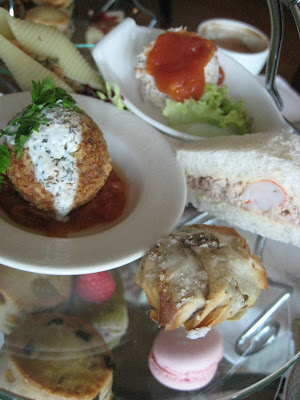 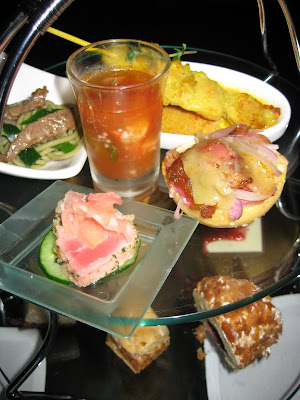 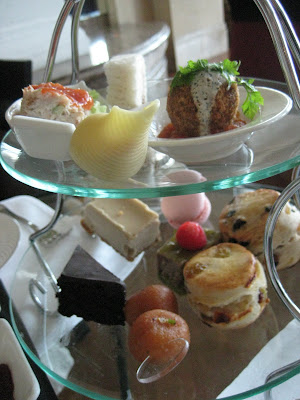 Can't remember the last time I had afternoon tea in a hotel. So when my best friend said we should have a belated birthday celebration for me, both of us were pondering where to go. After chancing upon Le Meridien's promo, we both agree the Conservatory would be worth checking out.

We were there before the witching hour but the waitstaff offered to serve us tea as the food was still being prepared. So I ordered Super Sencha while my friend opted for mochacino. The ambience in the Conservatory certainly didn't live up to its name - overall it was a tad gloomy and we were mystified how come the area nearest to a row of tall French windows were considered prime seats in the house.

The tea menu consists of two separate sets, cheekily named This and That. 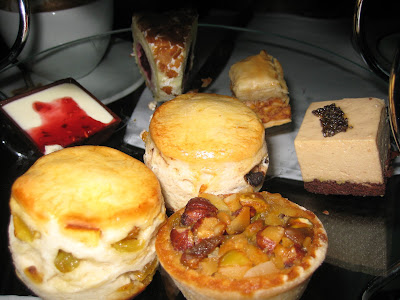 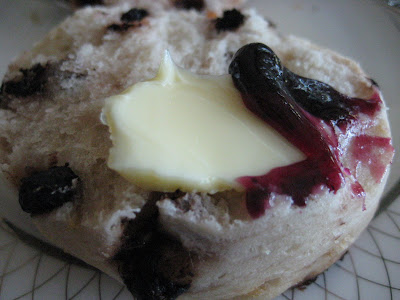 Besides the raisin and apple scones (still can't beat those from Delicious or The Tea Pot Cafe), there was a square of hazelnut mousse-type cake (delicious!), a mini tartlet and another square of phyllo pastry filled with mixed nuts (both tasted a tad dry), a mini sliver of vanilla and sour cherry roulade (passable) and a square chocolate case filled with vanilla mousse and raspberry sauce (good).

Honestly, we had a hard time recalling the various savoury and sweet morsels for both sets as the waitstaff kept taking away our menu. Perhaps they're afraid of it falling into competitors' hands?!! 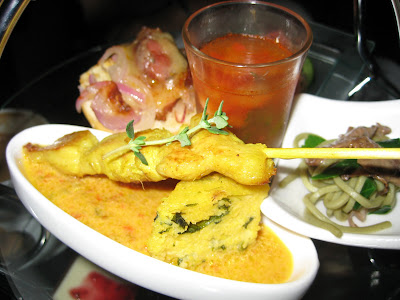 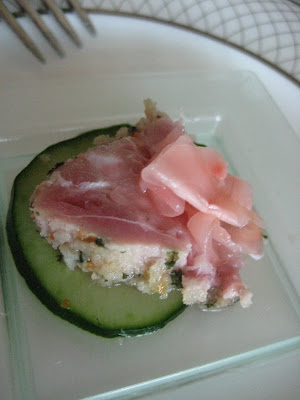 The above selection shows a skewer of chicken satay in Thai red curry sauce, an oyster shooter in zingy tom yam, half a mini burger with grilled lamb and caramelised onion and green tea soba with two slivers of Wagyu beef. Personally I think some of the tidbits would have been tastier had they been served piping hot. Alas it was not to be but we still devoured everything anyway. 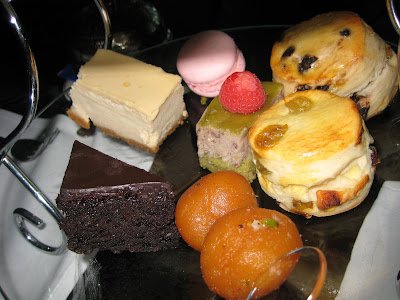 This set comprises the popular Indian sweet - gulab jamun, an unexpectedly fudgy chocolate cake, a pink raspberry macaroon (yummy!), an interesting macha (green tea) slice with crumbed almond base and another dainty square of cake that tasted like a cross between coffee and chocolate.

All in all, the afternoon was a hit-and-miss affair. Service was inconsistent at first - we tried hard to catch the staff's attention but after we had called for a second round of tea, they finally caught on and conscientiously refilled our percolators without being asked.

This was another bone of contention for me as I recall the Regent KL had the best tea service with proper Royal Doulton tea pots and cups no less. There were other little touches too that made their afternoon tea a truly classy affair - white starched linen napkins, a fine tea strainer on the side, tea brewed from real tea leaves and classic English-style morsels like cucumber sandwiches and rich fruit cake reminiscent of Enid Blyton's delightful stories. Ah, those were the days.
at March 19, 2009 2 comments:

It was a weekend of good eating. Lunch at The Loaf was utterly memorable - we enjoyed every morsel thus it was one of those rare occasions where everything turned out faultless. Yes, even the service...

Chef James Thong is one of the few young, talented chefs in KL today whom I admire. The lad's creativity is evident from the moment you savour his culinary offerings at The Loaf. Now everyone knows who owns the bakery while scores of others have raved over its scrumptious breads and U hu! hu! cheesecakes. Amazingly, few has any inkling of the delicious secrets that await them at the bistro. 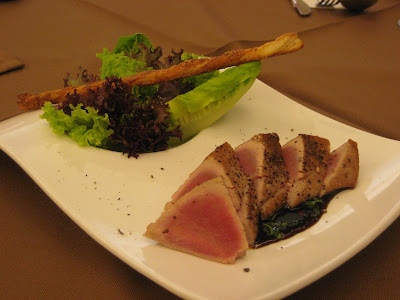 It's tranquil and understated dining room can sometimes be pretty well-occupied but the noise level is unlikely to rise to more than an audible hum.

We decided to try the Malaysian Grand Prix Menu - at RM48++ the set seemed like a fab deal with a starter, soup, main course, dessert and a glass of non-alcoholic wine included. The outlet's Oyju Japanese set meals also proved to be equally good value - one set costs RM40, two for RM70 and if you go for all 3 it's RM100. We settled for the Tsubaki and Sumire sets. 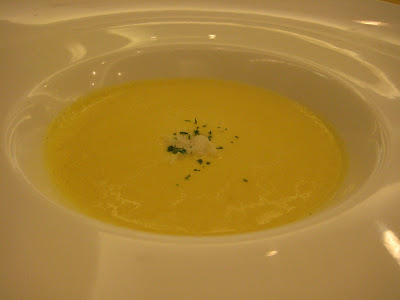 Corny but truly irresistible - the 'souped up' cream of corn!

In the pole position is the Seared Ahi Tuna with Mixed Lettuce Salad. Lightly cooked on the outside and rare in the middle, the triangles of rich, meaty tuna was a winner in every bite. The drizzle of velvety, viscous aged balsamic vinegar spiked with miniscule red chilli dices just adds to its sumptuousness. Heck, even the accompanying cheese straw that comes with the cluster of mixed lettuce leaves is unbelievably light, crisp!

As for the Cream of Corn...aaahh...it's the very personification of the word 'sweet' corn. Satiny smooth with a buttery sweetness, this is one soup that packed soulful goodness in every spoonful. Even my nephew who's the fussiest of eaters actually asked for seconds once he tried a sip! 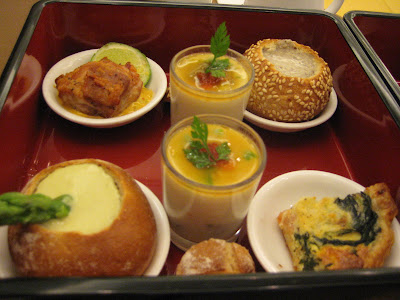 Goodies out of the Tsubaki box

When the Tsubaki set arrived, we discovered it certainly redefined the term 'thinking out of the box'! Packed with five petite-size temptations, we quickly dug in. First was the Cream of Wild Mushroom - served piping hot in a hallowed out sesame bun, both my sis and I couldn't decide which tasted better. They're a match made in heaven!

Our palates were further elevated by the Asparagus Soup - snug in its little, warm country-style bread receptacle, we relished every drop of its clean, slightly brassy nuance.

The onslaught of orgasmic flavours continued with Avocado Chawan Mushi. Warm, silky and rich, the shiitake-infused and avocado-layered egg custard simply seduced the palate with its musky accent.

By now, we were so 'high' that the Smoked Salmon Quiche's ethereal crispness and delectable filling quickly hit the spot while the Crispy Chicken with Curry Mayonnaise ignited the senses with its delicate zestiness. 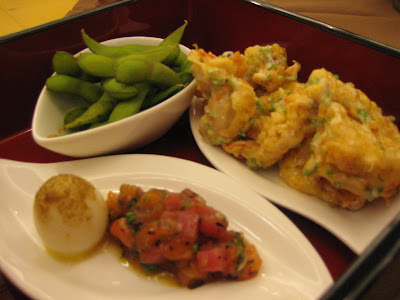 Pursuant to his brief stint at Salt - one of Australia's top restaurants owned by celebrity chef, Luke Mangan, Chef Thong replicates the famed eatery's signature amuse bouche (appetizer) - Salmon-Tuna Tartare with Quail Egg in the Sumire set. I admit I couldn't find adequate words to describe this sublime creation - you must savour it for yourself to fully grasp the ingenuity of this amazing starter.

Now the Boiled Edamame (Japanese green soya beans) may seemed like a no-brainer addition but juxtaposed against the supremely indulgent dish of Prawn Fritters with Spicy Miso Mayonnaise, their no-frills, minimalist note became crystal clear in the overall scheme of things. 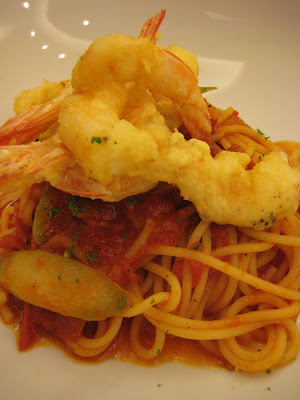 The main course that was part of the Malaysian Grand Prix set we ordered truly deserved a podium finish. Generously doused in a tantalisingly spicy, chunky tomato sauce with subtle tartness, the perfectly 'al dente' pasta can easily be mistaken for a feisty Arrabiatta. Shards of asparagus and springy fresh prawns wrapped in airy 'tempura' batter further livened up the dish's unmistakable appeal. 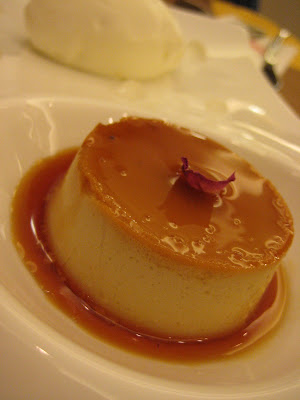 Taking the chequered flag in the final lap was a wobbly, satiny smooth Cream Caramel that left us swooning over its toffee sweetness. Complementing it was a scoop of snowy white whipped cream in which hints of coconut and mint were discernible.

It looks like Chef Thong's sterling performance will leave quite a few of his competitors trailing in his wake in the intense race for culinary supremacy. And we're lovin' it!