CHOC MUFFINS THAT TAKE THE CAKE! 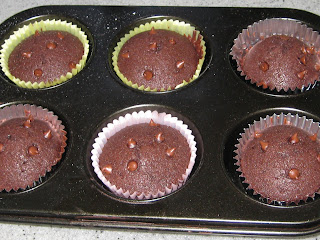 Every kid is a sucker for chocolate. Ditto for mine. Yesterday at the spur of the moment, we thought it'd be kinda fun to churn out a batch of chocolatey muffins. We were really pleased at how they turned out... 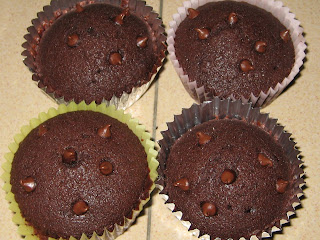 I used this easy-peasy Pound Cake recipe from my school's Home Science book and was amazed how well it worked.

Preheat oven to 180 degrees Celsius. Sift flour, cocoa powder and baking powder together. Cream eggs and sugar until mixture turns light and pale cream in colour. Beat eggs and add 1/4 of it into the egg and sugar batter. Stir well and add in 1 tbsp of flour mixture. Gently fold to incorporate everything evenly. Add in beaten egg alternating with flour until both mixtures are used up. Line muffin pan with paper cups. Divide and scoop cake batter into each cup until it is half filled. Scatter chocolate chips on top to decorate. Pop them into the oven and bake for 15-20 minutes. Test with skewer - if it comes out clean, the muffins are done. 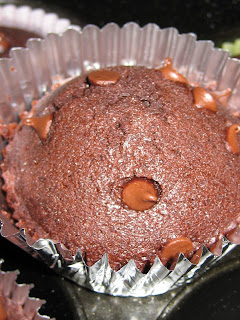 This close-up shot looks kinda 'spacey' huh? Like some alien territory...but one that really takes the cake! 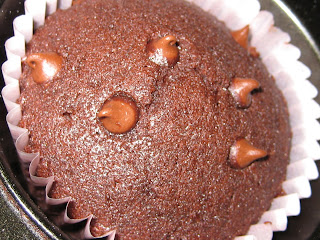 A recent trip to Johor Bahru means lunch with an old friend who is a good cook and an ardent food lover. We had lunch at Danga Palace. The Sichuan Hot & Sour Soup was notable in which the sour, spicy and saltiness are well-balanced. It was also brimming with goodies - strands of soft beancurd, wood ear fungus, bamboo shoot, etc. 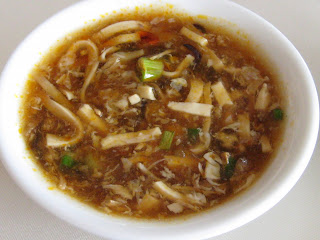 We ordered a chicken dish prepared in two ways - one with a piquant Thai-style sauce while the other coated in Marmite. Again the harmonious blend of flavours made the dish truly memorable. The latter was outstanding as the batter coating was thoroughly imbued with the Marmite sauce. 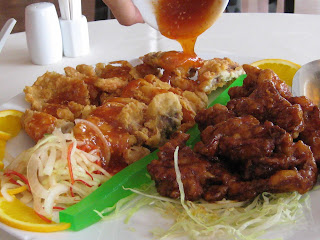 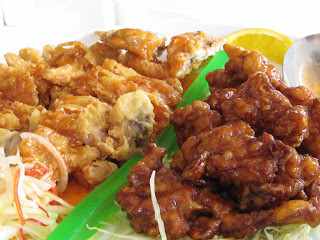 The other dishes we had were Stir-fried Kai Lan and a simple Beancurd dish. Later as we were wandering around JB, we stumbled upon an old bakery which has a 66-year old oven. They sell the real Roti Bengali that is popularly used for thick Hainanese toast, butter rolls, curry puffs and rounds of butter pastry. We bought one of their chicken curry puffs - the flaky pastry tasted richly of butter and the filling had a surprisingly generous amount of diced chicken meat. Too bad I forgot to snap a pix before it was devoured!

For dinner, we drove to Singapore. Found this decent Prawn Noodles with Pork Ribs in Chinatown. Quite different from our Malaysian version but it was tasty nonetheless. I luuuurrrvvve the soup - thank goodness it wasn't MSG-laden or else I would have suffered the consequences! Its hearty sweetness probably stemmed from the prawns and pork in it. Speaking of which, the pork ribs were equally nice and tender. Even the soft bones are edible with a nice crunch to them. 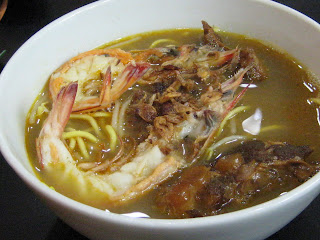 Hubby's Pork Rib Wantan Mee also came up to mark. In fact, it was better than some local ones from our "instant hawkers" here. It certainly put paid to our old presumption that Singapore-style wantan mee is weird and laden with tomato sauce. Well, not anymore. And if we Malaysians aren't careful their hawkers may just beat ours one day. Prices were another surprise - let's not do the currency conversion ok. Dollar for dollar, mine costs S$4 and hubby's S$3 for ours were small portions. I can't imagine us getting such decent food nowadays in KL...not when big prawn and pork ribs are concerned. 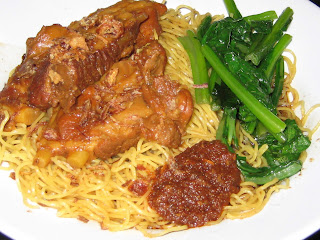 Other goodies which we had during our Chinatown jaunt included this German cheese sausage with mustard, a durian cendol (better than average which again was unexpected) and some roasted chestnuts (fresh, fresh, fresh without any badly shrivelled up ones like I sometimes get when I buy them in KL). 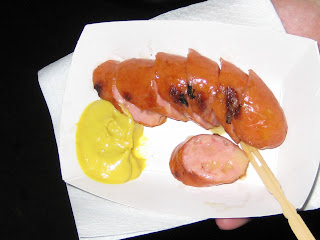 The following morning I had a most delicious kon lou (dry toss) meehoon with minced pork, pork and fish balls, sliced fish cake and deep-fried lard dices! Even the soup came with chopped seaweed which lent so much flavour. I can't get over the fact that I only paid S$2.20 for it!

All in all, it has been quite a revelation. It looks like their street food is fast gaining on us. Not a threat yet but if we are not careful, they will be.

We also went to Food Hotel Asia the next day but sadly, the show was a letdown. Perhaps my expectations were too high but there was nothing ground-breaking unlike when I first attended the event some years ago. So much so that I didn't even bother to shoot any photos...

Enroute back to KL, we stopped by the Machap rest area for a quick bite. Since I didn't have lunch, I grabbed a packet of Nasi Ambeng. This is Johor's equivalent to Nasi Lemak. A Malay friend told me it's a Javanese speciality usually served at weddings and auspicious kenduri or celebratory feasts. 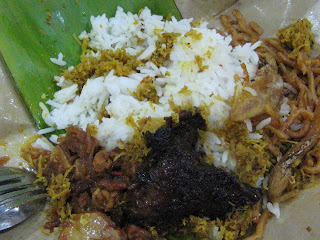 BONE UP ON BAK KUT TEH 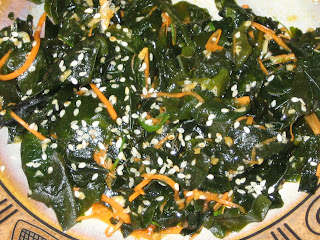 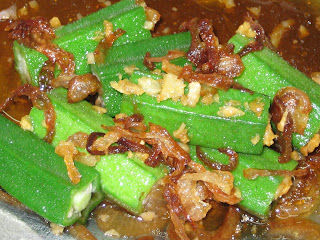 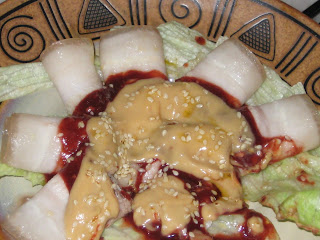 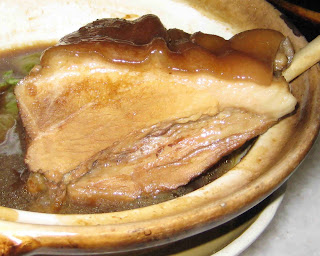 Shah Alam is not somewhere one would think of when the urge for Bak Kut Teh strikes.

Last week an acquaintance introduced us to He Take Bak Kut Teh, a 6 month old outlet in Kota Kemuning. It was our first time setting foot at that part of town but luckily it was still a breeze locating the shop.

What strikes us most at first glance is the rustic decor. The interior is purposedly done up with horizontally laid wooden planks reminiscent of old Chinese village houses. I grew up in one - my grandparents' old house in Jalan Ipoh looked exactly like He Take's so I felt right at home straight away! Aside from a hand-carved black and gold Chinese calligraphic signage, the walls are adorned with some old Shanghainese posters and mini oil lamps. Classic Chinese wood/marble chairs and tables complete the setting.

The outlet owner, Mr Eng is no stranger to the world of bak kut teh (BKT). His father's Teochew-style BKT recipe so popular in Malacca, his family now have cornered almost 80% of the Malaccan market. But Eng has a bigger bone to chew.

"I want to turn this into a franchise," said the former financial director. "If Old Town Coffee can turn their kopi tiam into a successful franchise, I aim to do it with He Take BKT". Having spent a good number of years overseas with several MNCs, Eng is now setting his plans into motion with He Take.

He said the outlet name is a phonetic reference to his father's name. "It's easy to pronounce and remember." And what of the outlet specialities?

While your BKT orders are being cooked, whet your appetite with Sichuan-style streaky bacon with spicy sweet and peanut sauce. If you dislike fatty bits, then steer clear of this as 2/3 of each slice consists of pure, white fat! Served slightly chilled, the delicacy simply melts in your mouth! The piquant, nutty sauce needs to be less though as it tends to overcome the natural porky taste.

I surprise myself that after sampling both, the Malacca-Teochew version seems nicer on the palate despite its more subtle nuances. The single portion comes with meaty ribs, sliced 'ng fa yoke' or five-layered belly pork, black mushrooms, beancurd puffs and sliced celery.

However, if you like your BKT potently rich and full-bodied, then the Klang-style version will be more agreeable. You can specify whichever parts you want i.e. knuckle, belly pork, soft ribs or chunky shin bones. It also comes with crisp-fried foo chook or beancurd sheet and black mushrooms. This hearty delight goes well with the yam rice and will have you asking for seconds.

The 'dry-style' version is darker, richer and tastes slightly spicy. It's better with white rice. Other goodies available here are steamed ladies fingers drizzled with crisp fried shallots and soya sauce, stewed chicken feet and BKT with mee sua (wheat noodles). Prices are reasonable - not much different from your average BKT outlet.