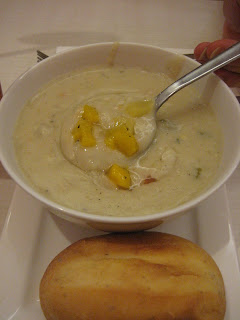 On a recent quick hop-over to Singapore, we stopped by for a simple lunch of soup (gasp! those who know me would be shocked as soup's not exactly down my lane) and sandwich at a little outlet called The Soup Spoon.

But hey, I figured that if the outlet's packed the food must be good rite? They even let you sample your choice from a little tasting cup. We opted for the set which consists of a huge bowl of soup, 1/2 a sandwich and a glass of iced lemon tea.

We settled for Clam Chowder which admittedly could have done with more clams and less starch in it but taste-wise it was passable. We were famished and the piping hot brew went very well with the given bread roll. The Ham & Cheese Sandwich (oh, the joy of eating REAL ham in eateries!) was incredibly scrumptious! The panini was soft, the cheese suitably melty and the ham slightly briny - perfect to go with the tangy side coleslaw salad (something our local KFC should learn from). Overall, it was a simple, hearty and reasonably priced meal. 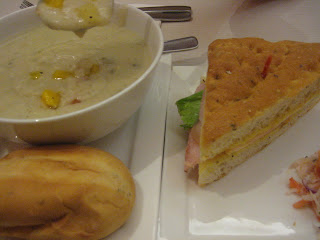 After trawling the malls (they all began to resemble each other after a while), we sought refuge in Blue Mountain Cafe. The place was busy even on a Friday afternoon...I had an Iced Chocolate with Marshmallow (shame it was only one!) - again stupendously good; very chocolatey and milky and just what I needed to soothe my frayed nerves from all that trudging around. 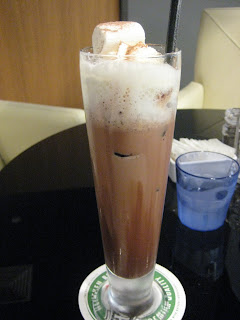 We hung around until it was time for dinner. We headed straight for Tampopo Family Dining - a Japanese restaurant at Takashimaya which touted its Black Pig specialities. Good thing we were early too as the place was soon packed to the brim! 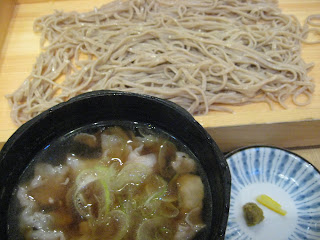 I had Tsuke Soba - essentially cold buckwheat noodles with sliced bacon and leeks in a rich, delicious broth. What made it really outstanding was how the condiments of 2 tiny yuzu strips and a miniscule dollop of citrusy/peppery salt gave such a distinct, tantalising lift to the overall ensemble. 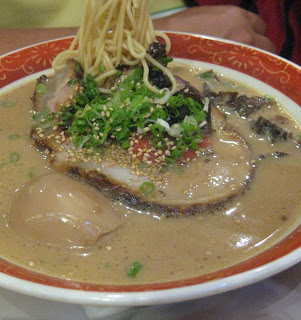 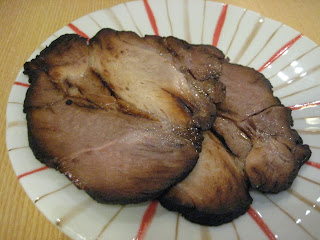 Hubby had the Kyushu Shoyu Ramen - as expected, it was equally yummy. The noodles were springy, the pork bone-based stock sublimely sweet with loads of wakame seaweed, sesame seeds, a hard-boiled egg and a sliced of Black Pig 'char sieu' in it.

Talking about that, we also ordered BBQ Black Pig - only two slices per serving but terribly sumptuous. Despite the meat being incredibly lean, it has a nice melt-in-mouth texture.

Another version of the noodles which we spied from the next table came with a mind-boggling tennis ball-size minced pork ball! I can only imagine just how salubrious it must have tasted...

Of course, I couldn't leave without trying this dessert I had been dreaming of the whole afternoon. The creation features multiple layers of ice-cream, custard and fresh fruit or different flavoured filling on top e.g. peaches and chardonnay, chocolate, green tea, etc 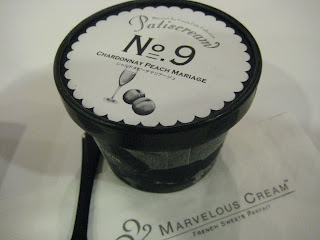 I opted for the Chardonnay Peach Mariage which comprised white peach jelly, chardonnay ice-cream, raspberry confiture, tart and white peach ice-cream. It was a heavenly confection that I had a hard time describing. It's just very sensual, lusciously creamy but light; the taste of crisp Chardonnay clearly discernible on the palate. 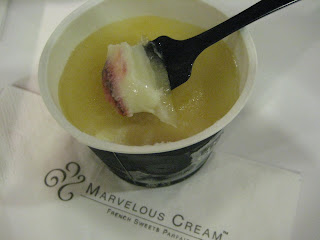 According to the promotional flyer, the Patiscream is made with 100% Hokkaido milk in Japan and features seductive variants like Mont Blanc (Italian chestnut cream with Custard Ice Cream and Sponge Cake), Blueberry Cheese Mille-Feuille, Belgium Noisette Chocolat and Passion Mango Trifle.

Needless to say, I looked rather like the cat that got the cream after that sweet treat.
- April 16, 2010 No comments:

OK I know I've been slacking lately when it comes to my food blog...too much travelling within the first quarter of 2010 has barely left me enough room to breathe!

That doesn't mean I haven't been on food binges though ;-D Just didn't have time to upload pixs and share those delish stuff that I had! So here's a quick peek on the glorious temptations that caught my fancy. 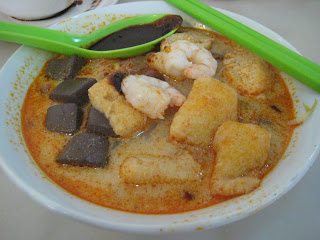 Penang Curry Mee from a local coffee shop (sorry, I forgot the name!) behind The Royale Hotel Penang

Don't knock the broth's pale colour - the spoonful of 'sambal' that comes with each bowl will transform the scrumptious curry into a fiery orange hue! 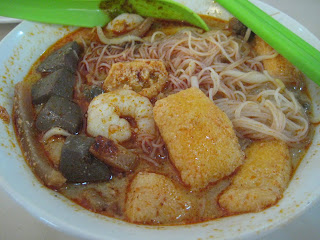 Taste-wise it's very piquant with a nice creamy undertone that only coconut milk can bestow. Personally I'd prefer it to be spicier but the whole ensemble is a real steal at only RM2.50 (small bowl). If you want the works like I did, it's RM4.50.

Also we returned to Nyonya Cafe @ New World Park to relish its delicious Nyonya food again. This is our 3rd visit and we were glad to see the outlet is no longer tucked away in a discreet corner. Now it occupies a huge corner lot that used to house Manhattan Fish Market. Still as busy and more importantly, the food is still as good! 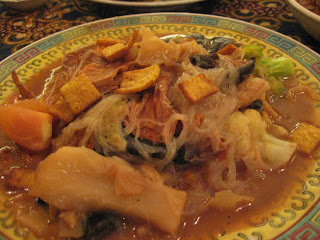 The Chap Chye here even passed my mom's acid test so that's saying something! 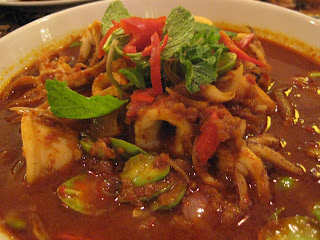 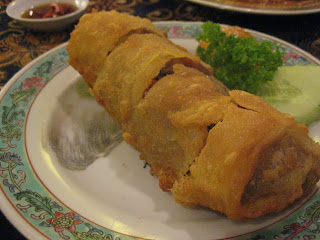 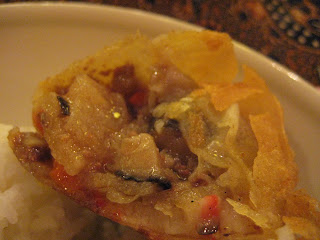 See the gigantic Choon Piah (Spring Roll)? It's chockful of sliced mushroom, minced pork, shredded mung bean (sengkuang) and carrot among others ... quite unlike those little insipid ones you'd find at most hotel buffets and even pasar malam stalls. Needless to say, it tasted super yummy! 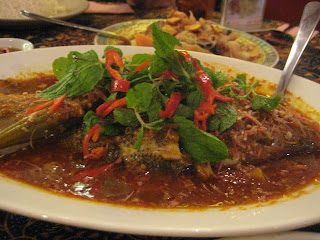 The Asam Pedas Fish is guaranteed to tempt you eating more white rice than you should. The seabass was incredibly fresh and sweet; the gravy tantalisingly tangy and spicy with the aroma of fragrant herbs coming through nicely. 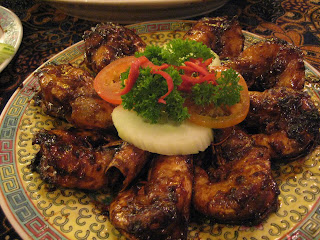 Another dish that I recalled having from my childhood was Assam Prawns where the succulent crustaceans are marinated in tamarind paste with a little sugar. When they're pan-fried, the marinade will caramelised and turn the prawns into an alluring shade of dark polished brown. Believe me, they are sumptuous and finger-licking good!

So if you're ever in Penang, make Nyonya Cafe your compulsory stopover.