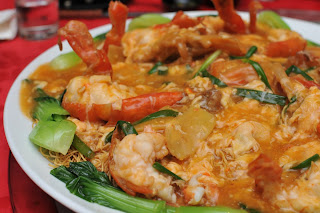 If you have a penchant for Sang Har Meen or freshwater prawn noodles, Richwell in PJ is the place to go. Complemented by toothsome egg noodles that are deliciously drenched in thick, rich and eggy gravy, the sizeable prawns (RM10/100g) are fresh and springy to the bite.

Helmed by veteran chef C.Y. Kam from the now defunct Restoran Teochew in Pudu, Richwell is the chef’s new domain where he adroitly serves up ‘old but gold’ comfort food at surprisingly reasonable prices.

You can of course splurge out on the usual fineries such as shark’s fin, abalone and other live seafood but most of the outlet’s homely offerings would only set you back between RM12 to RM45 each depending on serving size.

Two of the best dishes here are Pan-fried Minced Pork with Lotus Root (RM12-small, RM18-medium, RM24-large) and ‘Tong Por Yoke’, a sublime dish of Sliced Pork Braised in Soya Sauce (RM20-small, RM30-medium, RM40-large). The former is an old-school but scrumptious delight in which minced pork, chopped lotus root, water chestnut, and dried sole are flattened into a patty and pan-fried until the edges turn crispy. 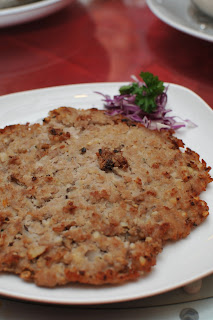 Instead of the ubiquitous man tou (steamed wheat rolls), the glistening, fork-tender braised pork slices in its dark and slightly unctuous soya gravy are enjoyed with pieces of crispy, light-as-air rice crackers that lend a nice textural contrast to the rich hearty speciality. 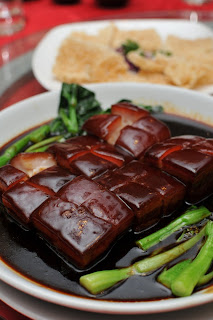 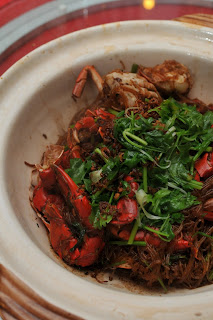 Another irresistible creation here is the Red Garoupa in Claypot (RM25-small, RM35-medium, RM45-large) that would have you picking the fish’s sweet, smooth flesh clean and savouring every last drop of the tasty broth and every bite of the silky-soft foo chok (bean curd sheet) in the pot. 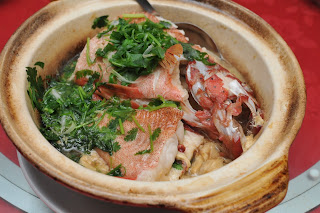 Baby Lai Pak (a type of vegetable with milky white stems and dark green leaves) with Yam in Claypot (RM15-small, RM20-medium, RM25-large) lent a satisfying balance to our scrumptious meal. 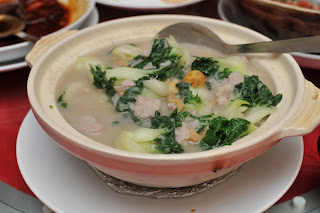 For the finale, sample Or Nee (RM20), a popular Teochew dessert made from mashed yam and ginkgo nuts. 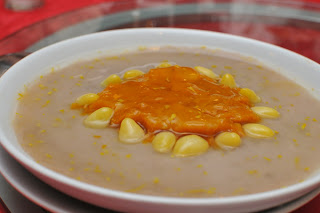 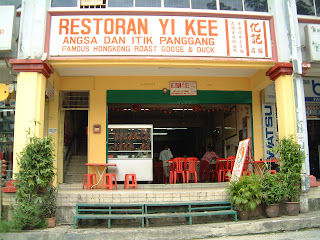 Whenever my family crave for roast duck, we'd always head to our favourite shop - Yi Kee in Taman Connaught, Cheras. 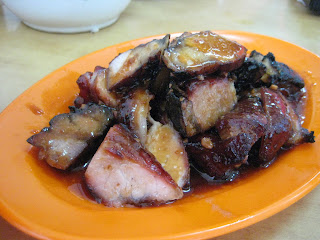 But our mainstay has always been its Roast Duck (RM13 – RM50) which is redolent with the aroma and flavor of five-spice powder and Chinese ‘hua tiao’ wine. There is just a slight trace of fat underneath the skin; the meat is delectably compact but not tough. 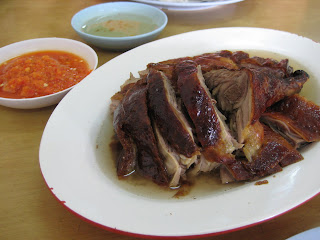 “Our goose comes from China, Hungary, Taiwan or Thailand weighing around 4 kilos each. We have our own special marinade for it; the goose is kept in a cooling cabinet for a minimum of nine hours before it is roasted.

“You'd find our roast duck’s inherent gamey taste is subtly tempered with ginger powder. All the ducks are hand-roasted by Mr Liew to prevent them from being undercooked or overly burnt.” 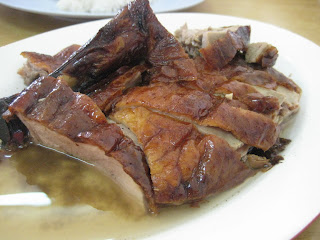 Instead of the usual sweet bean sauce, the roast specialities are served with sweet plum sauce and chilli dip which are the ubiquitous accompaniments in Hong Kong.

Choice Tip: Try pasta lightly stir-fried with pesto, some sweet bean sauce and shredded roast duck! Any leftovers can also be cooked with fresh mustard leaves and presto! you have a delicious pot of choi kiok, that tangy-spicy stewed vege beloved by many Chinese & Nyonya families. 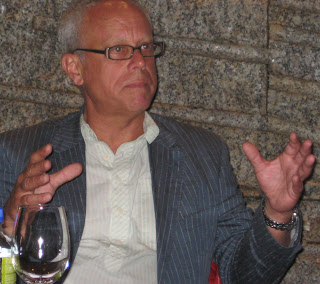 "Chefs are like artists but not everyone can be Salvador Dali."

That was the candid opinion of two Michelin starred chef John Burton Race who was one of the guest chefs for Starhill's Midsummer Night's Feasts this year.

In a upclose but nothing personal session with the media (both mainstream and online) at Shook!, Race came across as a really down-to-earth guy who readily admits that he wanted to become a chef when he was 7-8 years old.

"I used to help our family cook out a lot and remember this great big guy in his white chef's uniform at the hotel where we stayed on one of our holidays," says Race. "I was so impressed by him that I made up my mind there and then that he was who I wanted to be when I grow up."

Born in Singapore, Race reveals he was no stranger to the Asian continent.

"My step-father was with the United Nations Development Program (UNDP) so we've lived in Johor Bahru, Jakarta, Bandung, Melaka, Bangkok, Chiang Mai and Singapore. I didn't have a typical childhood like most Caucasian kids; I spent my days playing in the great outdoors, tagging along with villagers to the paddy fields, spearing fish there, making giant kites and flying them, and playing kite-fighting."

When he was in his teens, Race was sent to boarding school in the United Kingdom. He subsequently moved to France to work as a chef upon completing his professional trainng.

"I love the French way of living - they don't work too much, drink a lot and enjoy long lunches!" enthuses Race. "It was a great life but not for an English guy like me as they reckon Englishmen can't cook so I was forced to start right at the bottom in the kitchen."

Still he admires the French philosophy towards food and eating, admitting that he learned to appreciate food sources, how whole process of how produce is grown and animals are raised, and seasonality affects the food that people eat while he was in France.

"Fifty percent of good cooking is attributed to the ingredients that are used; having an understanding of ingredients is really paramount to a chef."

That is one of the reasons why the celebrated chef prefers to cook with local ingredients where ever he goes.

"It doesn't make sense to use seabass that was flown from thousands of miles away. For my stint here, I'd be replacing the seabass in my recipe with the local tilapia which is fresher. That's the most common mistake many European chefs make when they come to Asia. They want to leave their mark but they have to realise that the best flavours come from using regional and indigenious products while the cooking techniques can still be French or European.

"I don't have a blinkered view in this aspect. Also I'm fortunate that I'm familiar with Asian herbs and spices so I won't hesitate to use them in my cooking."

When asked on his view on molecular gastronomy, Race says he admires Ferran Adria for his inventive approach.

"I've nothing against molecular gastronomy but I'm kind of old-school when it comes to cooking. El Bulli can be quite an experience - the food's artistically done, the flavours are very intense but I do miss the different textures of real food."

He stressed that chefs must remember who they are cooking for; they must respect their customers and culture. "Very few people 'get it' and the ones who do have the possibility of being an artist. You can't stop learning and the world doesn't have time for insular chefs."

What is his favourite food? "Oh the world's too big for me to have just one favourite dish. I love the richness and sweetness of durians, those of mangosteens and rambutans."

When pressed on what would he choose to eat as his last meal on earth, Race gleefully reeled off "25 items" that include nasi goreng Indonesia, champagne, freshwater prawn noodles, French wines, chocolates, breads, and "choke to death on some good shellfish!" 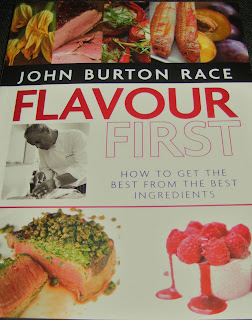 The celebrity chef who has hosted several cooking shows on TV also is also a published author. His Flavour First cookbook is written to inspire people to cook but has absolutely no idea how to go about it.

"It's very basic and hopefully they'll gain more confidence as they go along."
at July 09, 2010 No comments:

CURRYING FAVOUR WITH A NEW CHEF 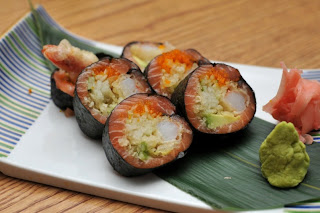 It is not everday when one's first encounter with a new Japanese chef in town was over a bowl of Curry Udon.

But that was exactly what happened when Prince Hotel & Residence Kuala Lumpur hosted some food bloggers including yours truly to meet ENJU's latest king of its Japanese kitchen - Chef Heiji Kasuga.

Our encounter was fleetingly brief as the new chef had his hands full; the restaurant turned out to be unexpectedly busy on the evening we were there.

Still, with 46 years of experience under his torque, Chef Kasuga seemed undaunted by the frenetic pace and gamely served up a succession of dishes for us to sample. Most were typical Japanese fare with the exception of 1-2 items which had subtle fusion accents.

Setting the ball rolling was Assorted Makimono featuring 3 types of rolled sushi. The first was ENJU Dynamite Roll (top) made with fresh salmon, cucumber, flying fish roe, tempura flakes, avocado and vineegared rice wrapped in seaweed. Although the change is barely discernible, the rolls did appear daintier than before. 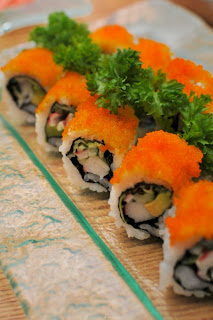 Two other rolls were those reversed versions that were speckled with different types of roe outside. One was filled with crabstick, cucumber, avocado and egg with orange fish roe (pix above) while the other combined pickled daikon (radish), cucumber and crabstick with green prawn roe. 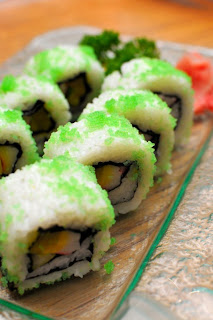 We also sampled a slightly fusion dish - Murugai Yaki (grilled mussels with egg yolk sauce). It was an incredibly simple but moreish delicacy - I love that the inherent sweetness of the mussels remained intact despite the rich creamy sauce on top of it. 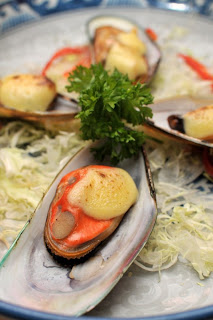 Chef Kasuga also proffered Gindara Saikyo Yaki which was grilled cod that had been marinated with miso (Japanese soya bean paste). The fish came in bite-size pieces on Chinese soup soons for easy eating. Personally I found the miso flavour far too mild and local palates used to stronger, more robust fare may find the overall taste a tad too bland for their liking. 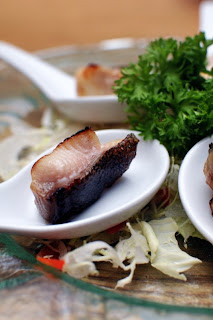 Next up as the Soft Shell Crab Karaage. Thankfully the deep-fried soft shell crab pieces remained crispy to the bite after photography was completed. Dainty mounds of creamy potato salad were served on the side to lend additional susbtance. 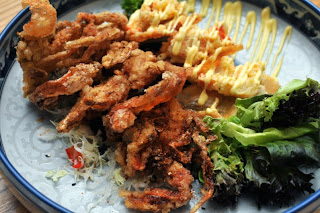 Then came the bowl of Curry Udon which I stared at intriguingly. When I took my first mouthful, I hadn't really prepare myself for the thick gravy's unexpected burst of sweetness. My facial expression must have been quite comical and caught the chef's eye. He immediately bustled over, declared proudly that it was a classic Japanese favourite and asked for my opinion. Well...I had to admit that it was my first run-in with the dish and told him that it was indeed a novel experience. Luckily my other half thought the noodles were great so I gladly let him devoured the whole lot and Chef Kasuga seemed to be ok with that.

All in all, the food was agreeable though I think we were anticipating 'sparks' to fly. Perhaps the chef is playing it safe for now and decides to keep things on an even keel?