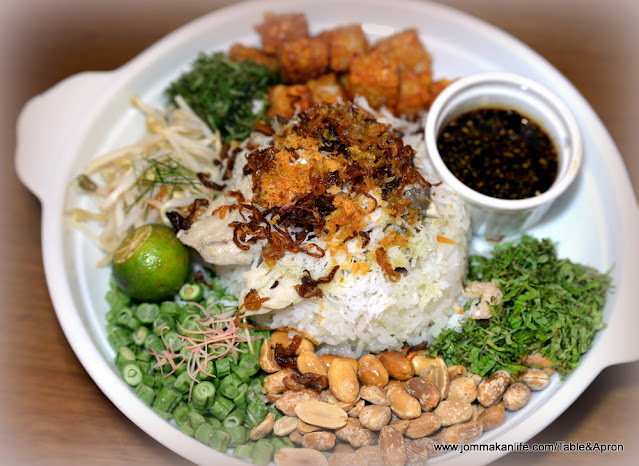 I'm stoked to savour my favourite Ulam Rice (RM38) from Table & Apron (T&A) restaurant after a 2-year hiatus. The prolonged MCO and the inter-district/inter-state distance between my residential neighbourhood and the resto put paid to plans for food deliveries, much less dine-in visits. When a recent invitation to meet restaurateur Marcus Low came up, I couldn't pass up on the opportunity. 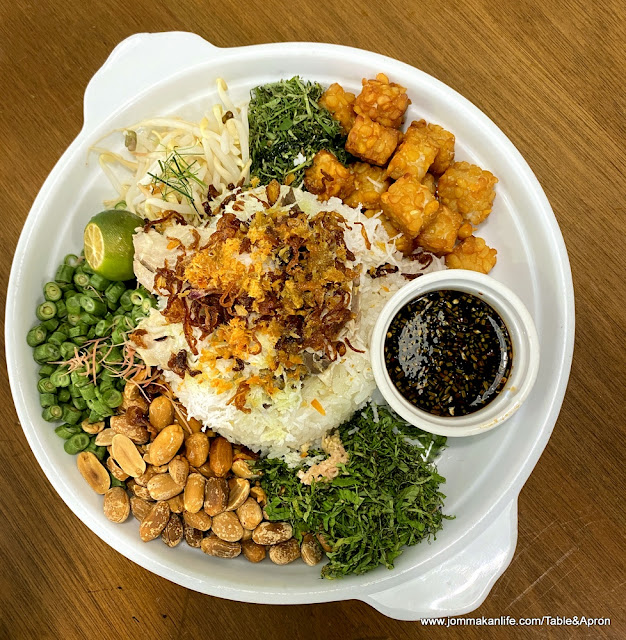 This perennial speciality that has been always been on the T&A menu is an updated version.  A hybrid between Hakka lei cha and nasi kerabu, the mound of rice is surrounded by cubes of crisp fried mung bean and split peas tempeh, chopped long beans, chopped fresh mint, chopped daun kesom, shredded kaffir lime leaves, raw and toasted coconut flakes, blanched beansprouts, chunks of ikan tongkol, roasted peanuts, curry leaf-infused oil, and spiced kicap manis.
Squeeze the kalamansi lime over the rice, then pour the dark soy dressing over it and stir everything thoroughly. The cohesive mingling and melding of textures and flavours make this an incredibly appetising dish we thoroughly enjoy eating with great relish. Each mouthful is a riotous flavoursome party. Our only complaint is the roasted peanuts which would have been better crushed. 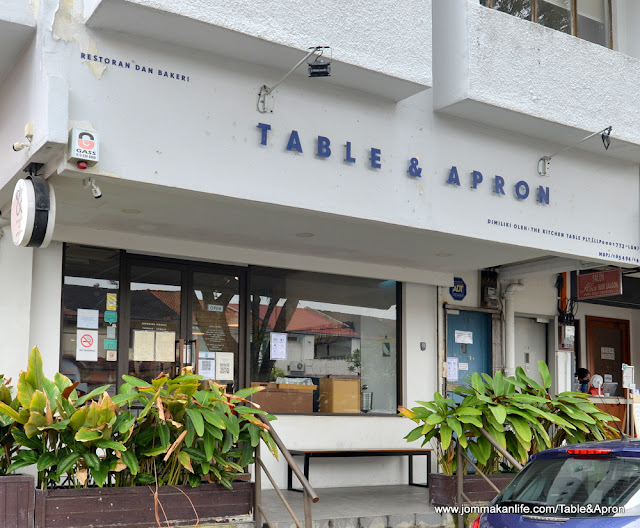 That's basically the crux of Table & Apron's success formula. According to founder Marcus Low, “It's hard to pigeon-hole us but Table & Apron is a Malaysian restaurant at heart. Most of the dishes we serve come with unexpected twists that seem familiar to our guests yet at the same time, they’re also something new.” 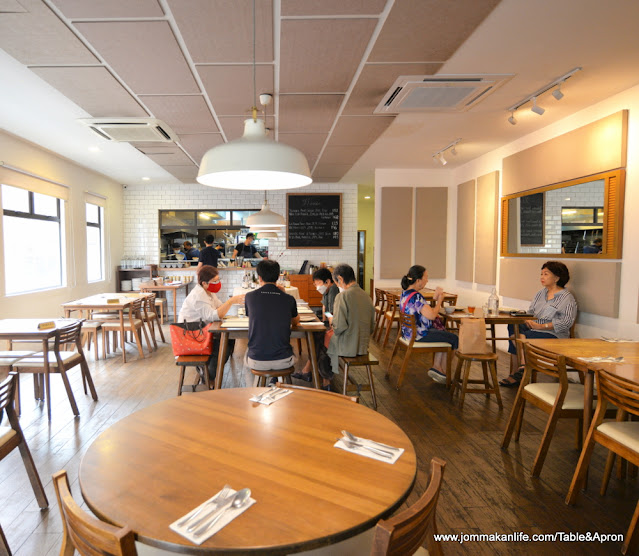 The former mechanical engineer reveals he couldn’t resist the siren’s call of culinary after he had given engineering his best shot. Recalling his earliest interest in food was sparked when he was around 12 years old, Marcus says he decided to get his feet wet in the restaurant business by starting out as a dishwasher and kitchen porter.
Fuelled by passion, resilience, and determination, Marcus sought various other roles within the kitchen before embarking on his own private supper club stint. One thing led to another, and his dream of being a restaurateur finally came true. Marcus is understandably proud to have celebrated Table & Apron's (previously known as The Kitchen Table) 7th anniversary recently. It's a significant milestone as countless F&B entities have fallen by the wayside in the Klang Valley’s cut-throat F&B scene, amidst prolonged MCO shutdowns during the pandemic.
According to Marcus, "It's my restaurant, but I now want it to be our restaurant - a compelling reason for our employees to own their craft. It's reason enough to realise that as much as we are in the business of food & service, we’re actually really in the business of people.”
My admiration for Marcus and the T&A team grow exponentially when I realise the restaurateur is a caring, empathic employer who goes the extra mile for his team or community as he calls them. By inculcating T&A with its own corporate culture and treating the team with care and respect, I personally can bear testament to the positive pay-offs as a paying customer, (T&A prefers to call us guests). All my past visits to T&A have been positive experiences. Much to their credit, the team has always been on the ball, from the minute we step in up to the time they bid us farewell.
Not many F&B owners bother to offer a designated area for their team to rest in-between operation hours, serve familial-style meals to foster esprit de corp, conduct daily sharing/debriefs sessions, and allocate a budget for regular market intelligence to enable team members to stay abreast of F&B trends...kudos to T&A for such initiatives. 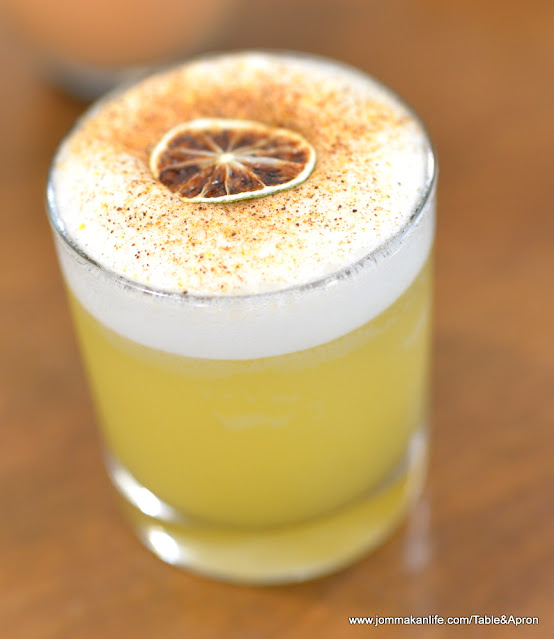 Now the proof of such internal community TLC is reflected in the food and drink we partake, starting with the handcrafted tipples such as Pineapple & Assam Boi (RM14) and Earl Grey Milk Tea (RM15). Easily recognisable among the local populace, the slightly salty, sour and sweet Pineapple & Assam Boi drink offers a refreshing juicy version of our Malaysianised way of eating fresh guava slices sprinkled liberally with assam boi (salted preserved plum) powder. 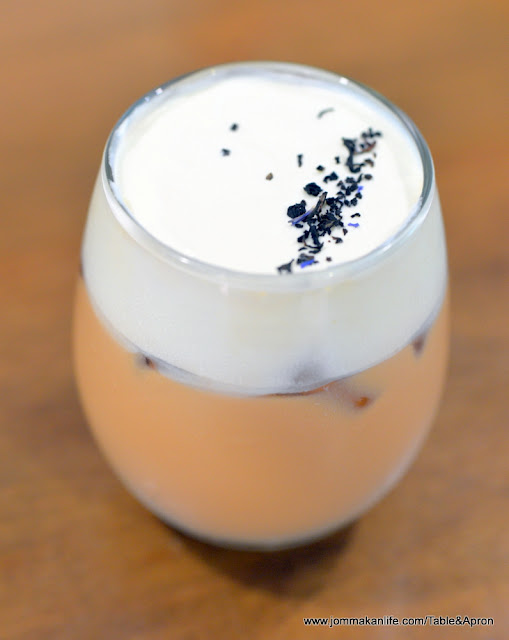 As for the latter, Marcus recounts the Earl Grey Milk Tea as a Merdeka Day tribute some 4 years ago when bubble tea was all the rage. “We decided to put our own spin on it with Earl Grey tea, gula Melaka syrup and salted whipped cream.”
Although it doesn’t contain any boba, the fragrant, milky and lightly sweetened tea comes with a good frothy crown and an enticing bergamot scent. 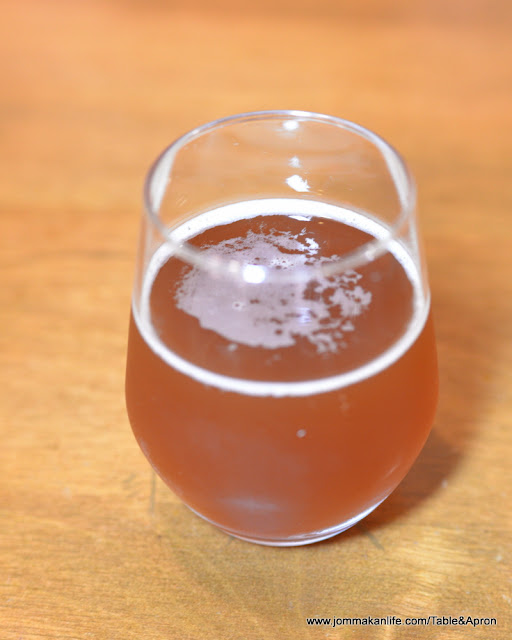 Should you prefer something gut-healthy, there’s tangy Kombucha. Brewed by a former T&A team member who has since moved on to start her own artisanal F&B biz, the fizzy drink has a nice tantalising tartness to it. 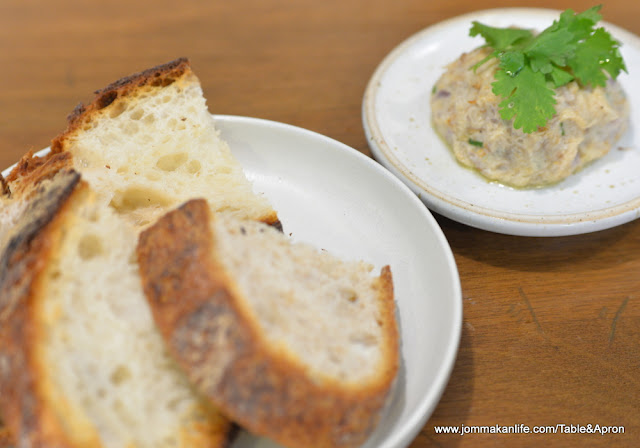 Marcus and his team have grown and progressed over the years too. They also operate the adjacent Universal Bakehouse which supplies T&A with Assorted Sourdough (4 slices-RM4, 8 slices-RM8). Various condiments, ranging from Butter, Sea Salt (+RM3) to Smoked Mackerel Pate (+RM10) are available to complement the toasted bread. 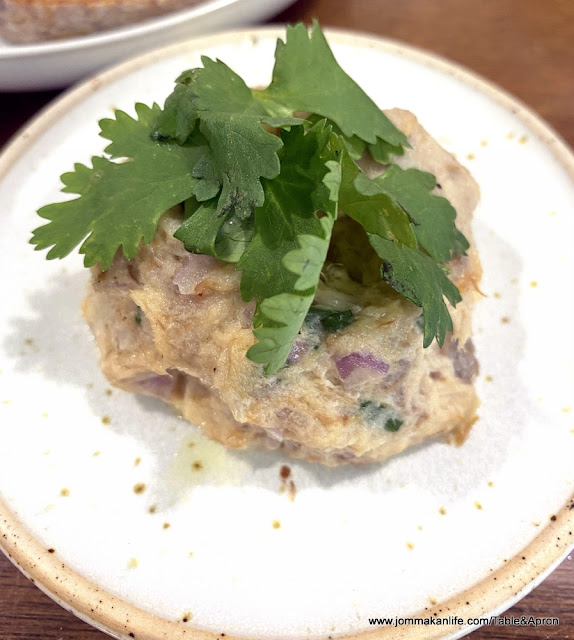 Interestingly, the team is flexible enough to accommodate certain dietary requests where permissible. For instance, the Smoked Mackerel Pate – concocted from cream cheese, chopped spring onions and onion – comes sans onion upon request from one of our dining companions. Personally, I like the bursts of sharp, fresh acidity so I’m happy with the original version as it is. 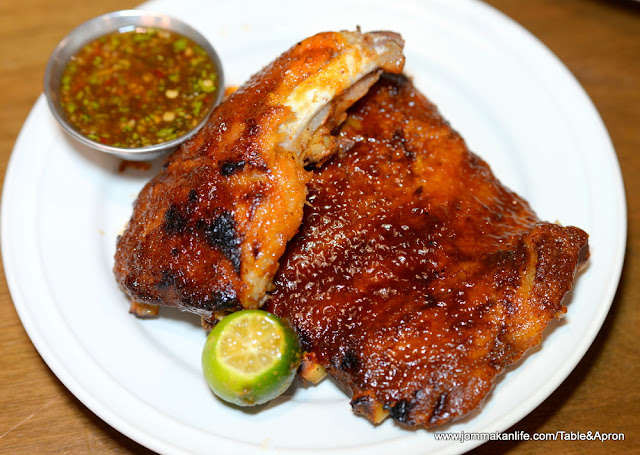 Another show-stopper which has kept evolving and unfailingly gain a loyal following is Pineapple Ketchup Glazed Ribs with Tamarind and Chilli Dip (4 pcs, RM30/8 pcs, RM56). 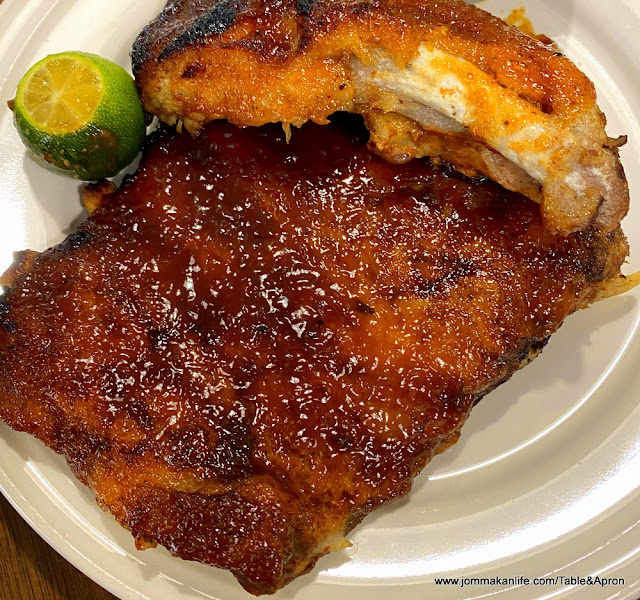 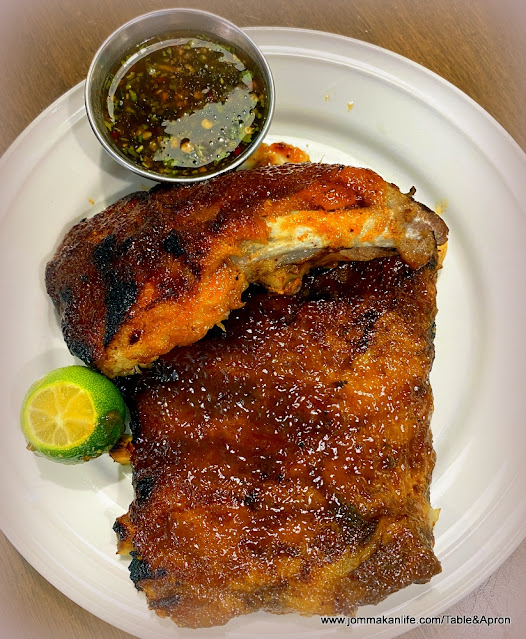 While most restaurants proffer Westernised hickory smoked barbecue accents, T&A takes great pride in teasing our tastebuds with juicy fall-off the bone ribs suffused with sticky fruity-sweet and savoury flavours. You can opt to amp up the appeal even further with the tamarind-chilli dip but IMHO, it doesn’t need it. 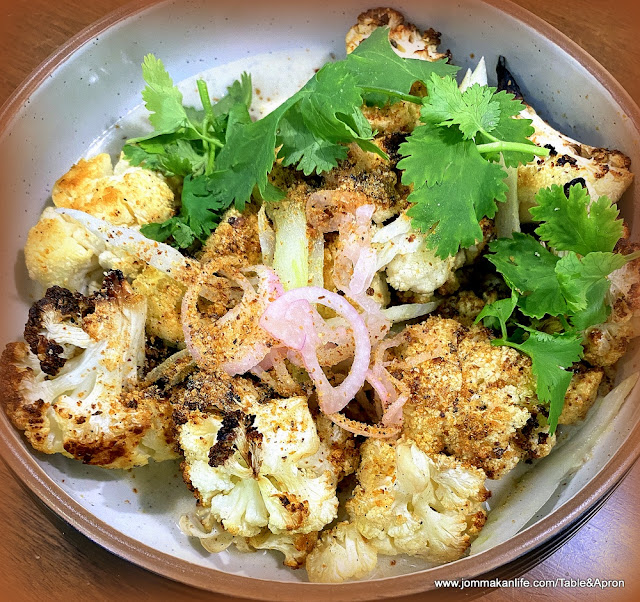 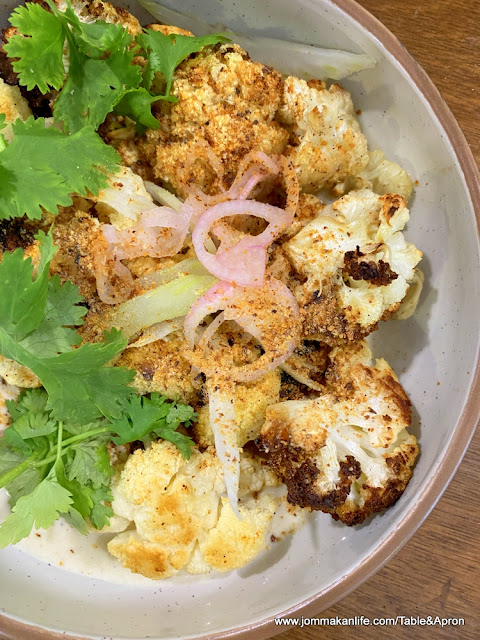 Slightly charred at the edges, spiked with slivers of tart onion pickles balancing the creamy ricotta, the Roasted Cauliflower, Ricotta, Pickled Onion and Breadcrumbs (RM21) is the type of vegetable dish everyone will happily devour without fuss. 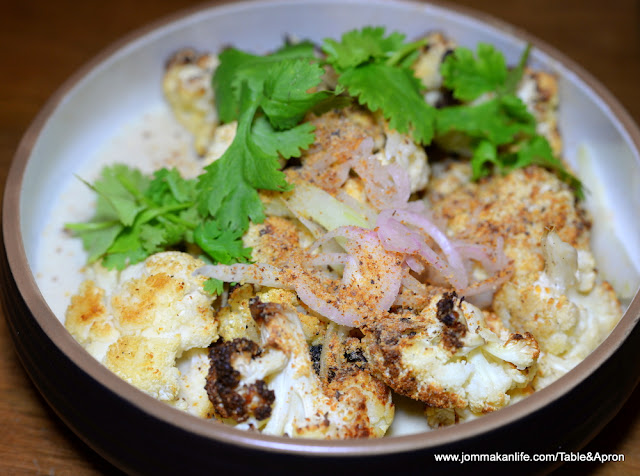 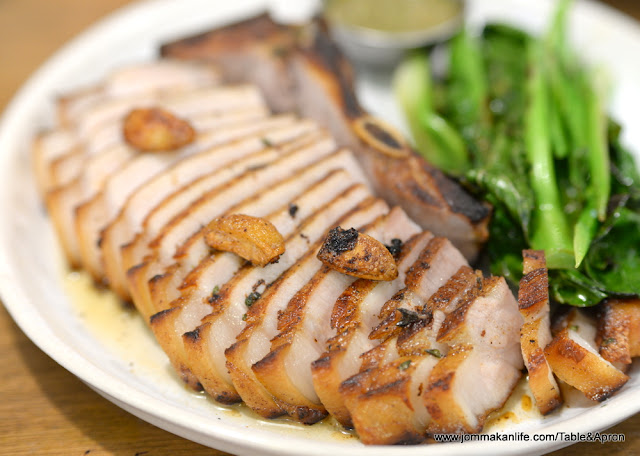 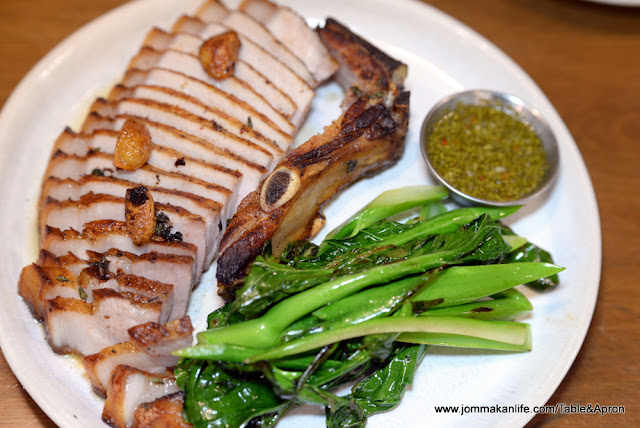 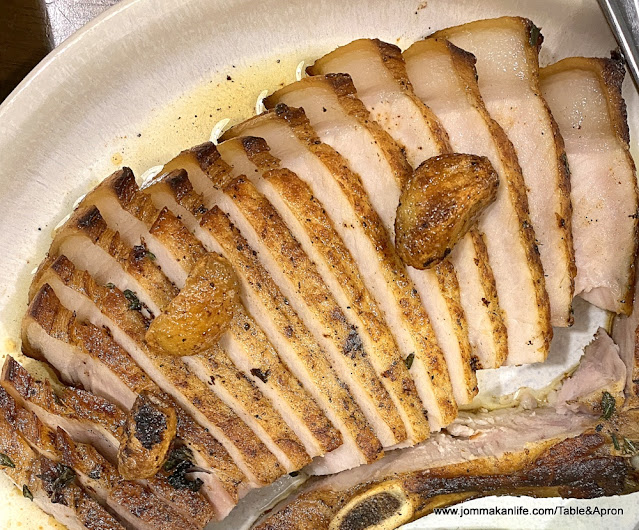 Where possible, the T&A team advocates the use of local ingredients – the Fish N’ Chips being a good example, highlighting local catfish instead of imported fishes. The sizeable chunks of battered fish accompanied by thick-cut fries go down a treat, coated in T&A’s signature buckwheat batter that renders each piece crunchy-crisp. This was a constant best-seller when it was first introduced as a tea-time takeaway treat so much so T&A finally made it permanent in the menu. Personally, my vote still goes to the much-loved buckwheat fried chicken...another T&A must try! 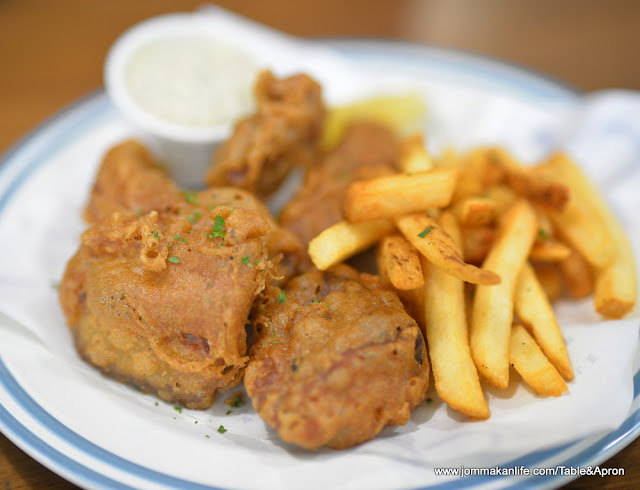 Our dessert of Apple Crumble Tart with Salted Crumble and Thyme – a newish creation – is a tad underwhelming after the earlier succession of high points. We reckon an old-school apple pie would simply hit the spot better. 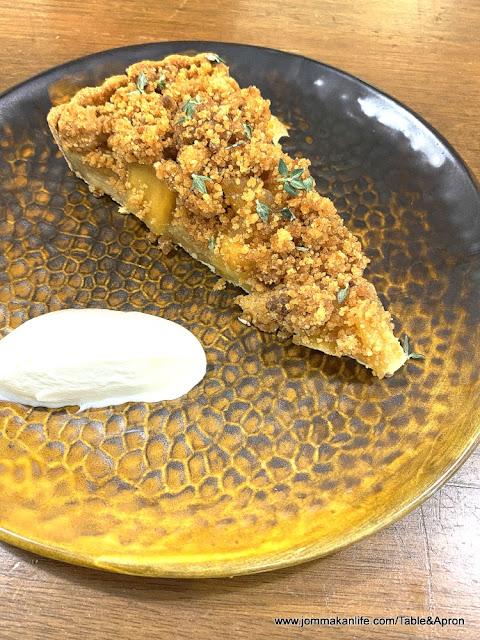