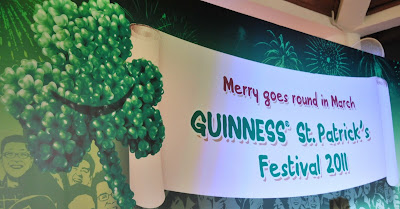 Guinness goes green for its St Patrick's celebration this March 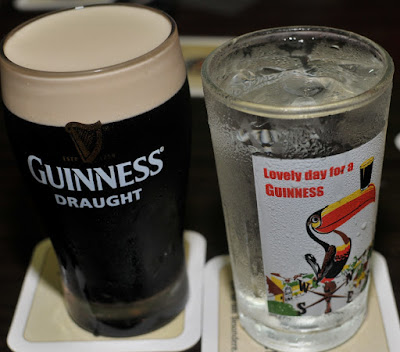 The retro ad on the glass (right) says it all...
Guinness is set to unleash its black magic this March in conjunction with its nationwide St Patrick's Celebration.

The world's favourite black brew aims to spread good cheer, ensuring that Merry Goes Round in March via a host of high spirited street parties, fun activities, exciting promotions and delectable Guinness-infused menus at 36 hot spots across the Peninsular and East Malaysia. 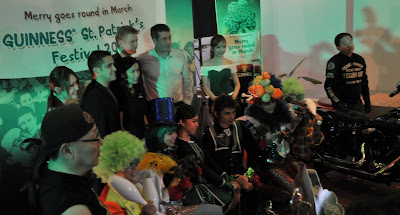 The media launch was a riot with the thunderous roar of 3 Harleys leading a procession of colourfully clad dancers, jugglers, mime artist and pretty ambassadors. Of course, no party's complete without a spread of good food so here's a sneak peek of the buffet (well, part of it anyway!). 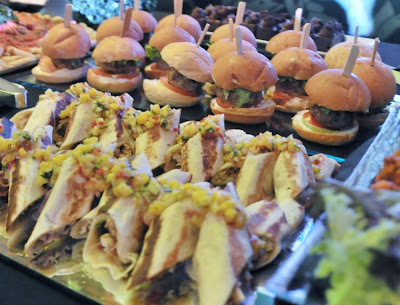 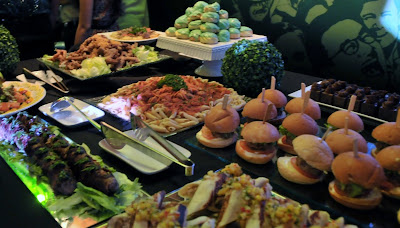 We loved the deliciously moist chicken burger, fried prawns on skewers and a plethora of yummy bites!

The following night, we tagged along with Big Boys Oven to Deutsches Gasthaus in Bandar Sri Menjalara for a taste of the Porky Bierhaus' Guinness inspired specialities. 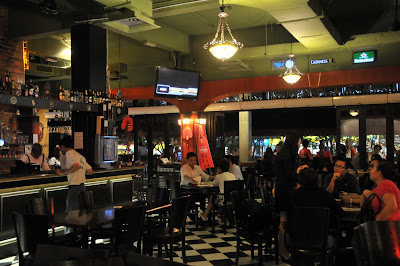 Inside the cosy German-style tavern 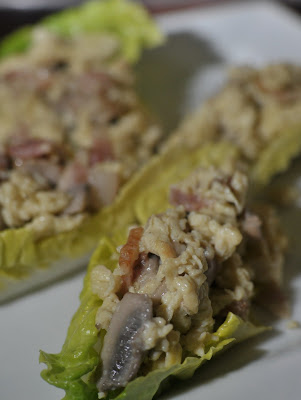 Appetiser of scrambled egg with chopped mushroom & bacon on cos lettuce 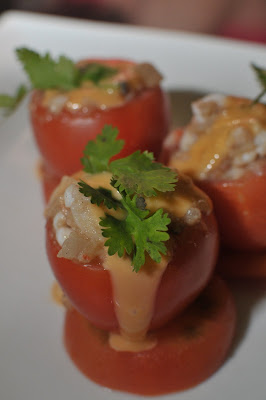 After an effusive welcome from manager Katherine Lee, we were treated to two appetisers specially created by the in-house kitchen team. The first was Deutsches Gasthaus Omelette with Bacon and the second, Thousand Island Tomatoes with Mixed Seafood Filling.

Still both passed the taste test - I especially like the first item though it was a little messy to eat. The second's a great way to enjoy tomatoes...just think of all the lycopene (an anti-oxidant) that's so good for you! 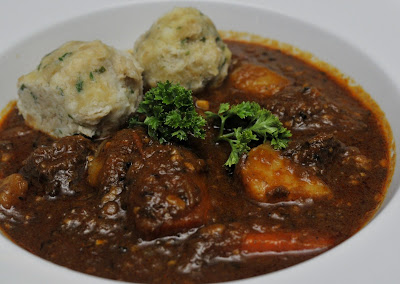 Now if there's one dish you absolutely must have is the Beef Goulash Stew with Dumplings! Hearty and rich, we mopped up every last drop of the yummy gravy with the accompanying dumplings and wolfed down the melt-in-the-mouth tender beef with great gusto. 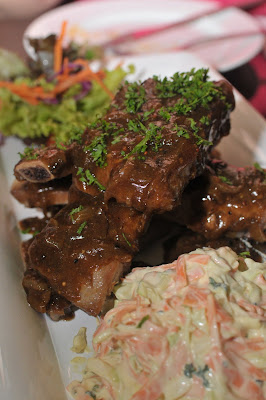 Coming in a close second is the Braised Pork Ribs with GUINNESS® Sauce . Juicy and ultra-tender, the ribs were chockful of caramelised malty flavour that left us craving for more. 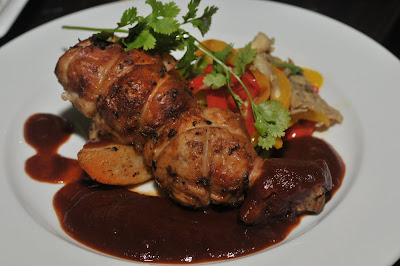 Another offering that left us clucking with approval is the GUINNESS® Chicken with BBQ Sauce. Served with a tri-colour Capsicum & Mushroom Salad, the boneless chicken was superbly moist on the palate. 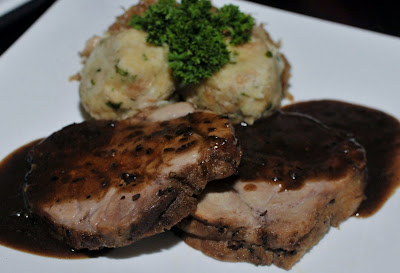 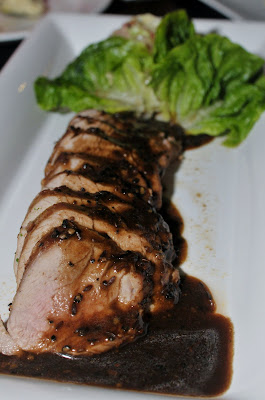 We were left in a quandary when we were asked which was better - the thick, round slabs of Roasted Pork Loin with GUINNESS® Sauce or the delicately sliced Pork Fillet with GUINNESS® Sauce and Bacon Cabbage. Both had a lot going for them so in the end, we suggest you can have your 'cake' and eat it too just this once! 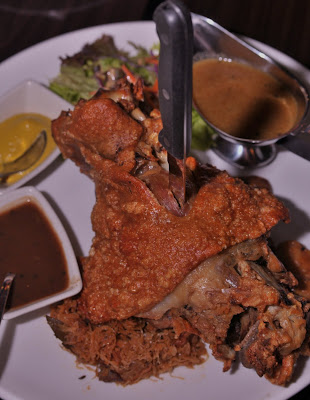 Of course no visit to a German pub/eatery is complete without the piece de resistance - the Crispy Pork Knuckle! Just remember that this house speciality is NOT part of the Guinness St Patrick's promotion menu so don't get confused ok.

Served with sauerkraut, brown sauce, gravy, mustard and roast sliced baby potatoes, the humongous chunk of meat covered with crispy crackling is every carnivore's dream. Personally, my only complaint was that the pickled cabbage appeared a tad dry and somewhat lacking in tanginess.

We were told that there are customers who would eat the pork crackling and leave the meat untouched! Which is quite a waste considering how sublime the subtly briny flesh is. 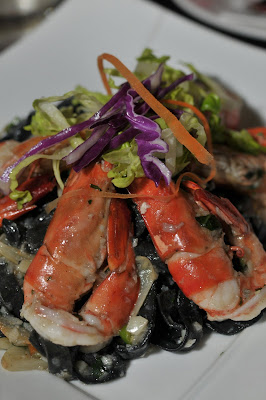 The Homemade Pasta Nero with Prawns turned out to be a real gem, setting our tastebuds ablaze with its light garlicky cream sauce that's studded with chopped bird's eye chilli. 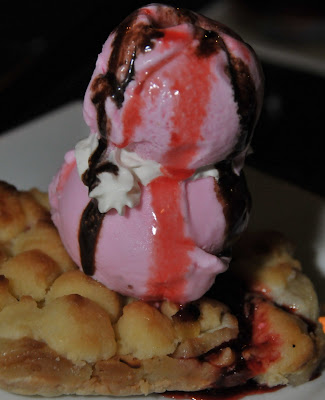 Like fairy tales and happy endings, no meal is ever complete without a sweet conclusion. Our group quickly made short work of the delightful Strawberry Ice Cream Apple Pie and Vanilla Ice Cream Pancake (not in photo). 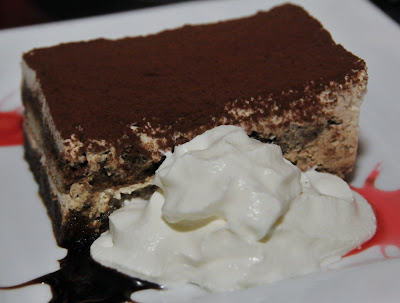 As for the Homemade Tiramisu, the general consensus was that the sponge fingers were so heavily infused with liquor that the alcoholic accent eclipsed the delicate mascarpone and cream layer. But don't let our judgement cloud yours if you're a fan of this Italian 'pick me up'...

Now would you Merry me? :) Find out how now via:
http://www.facebook.com/guinnessmalaysia

both was truly heaven, the food was exquisite! I know we licked clean most of the plates! :)

Nice to meet you that night :)

I love the crispy skin of the pork knuckle, must go there & have it again!

Gosh, it was certainly a meal to remember with all the porky goodness!

now i am hungry