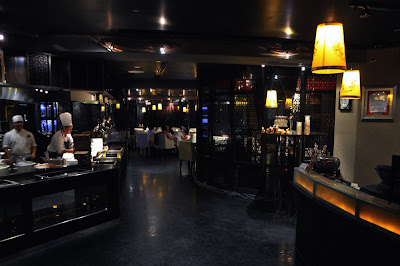 Classy and elegant...the interior of Zing 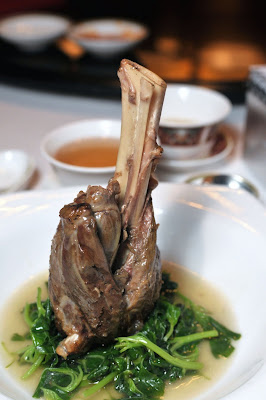 It was the pièce de résistance of our dinner at Zing, the opulent Chinese restaurant at Grand Millennium Kuala Lumpur – a whole Stewed Lamb Shank with Chinese Parsley that I daresay would give some Michelin-starred chefs a run for their money. 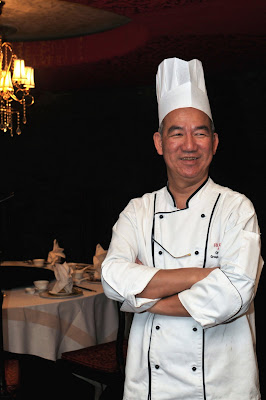 Chef Chan Kwok's latest creation is such a bold masterstroke that it left us in no doubt that he deserves the numerous accolades that had been heaped on him including Chef of The Year and Asian Cuisine Chef of The Year at the prestigious Asian Gastronomic Awards of Excellence 2011. After all, who would even think that such sublime sweetness could emerge from stewing lamb shank in a simple broth flavoured with just Chinese parsley? Served whole on the bone on a bed of blanched jade-green spinach, not only has the tender and juicy meat retained its inherent gaminess but also boast a tinge of delicately fresh herbaceous accent to it.

Complemented by a full-bodied Pu Er tea, the pairing was just one of several dishes that we had a chance to sample at Hong Kong master chef Chan Kwok's latest stint as a guest chef at Zing. No wonder Hua Ting Singapore continues to be a favoured restaurant for legions of discerning Chinese food connoisseurs after all these years. 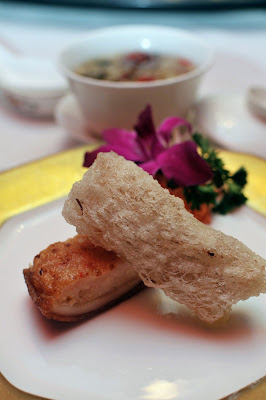 Our dinner had commenced on a high note, starting with Roasted Suckling Piglet Skin with Prawn Paste and Crispy Fresh Crabmeat Spring Roll. It was a cornucopia of crispy, crunchy, springy and chewy soft textures interspersed with flavours of sea-freshness and delectable meatiness. To alleviate the appetisers' oily richness, the Eight Treasures Tea's subtle sweetness proved a welcoming counterpoint. 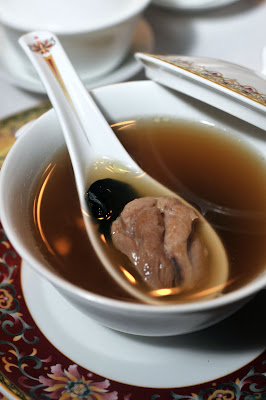 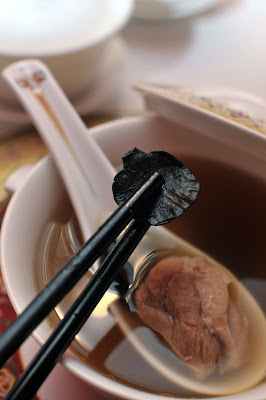 When it comes to soups, nobody can rival the Cantonese. In this aspect, Chef Chan Kwok's Double-boiled Chicken with Lingzhi Mushroom is second-to-none. Despite the soup's muted bitter aftertaste, it is a soul-satisfying broth. Much to our surprise, the bitterness magically disappears after sips of the accompanying Oolong Tea. 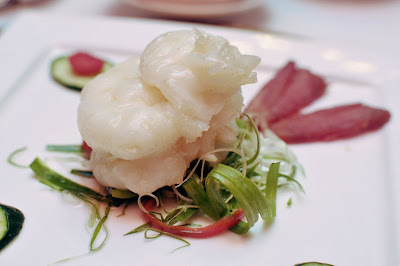 Deft knife and cooking skills were the secrets behind the chef's signature Crystal Prawn. Snow-white and marble-smooth, the huge crustacean was an epicurean treat; its sweet, springy flesh redolent with the irresistibly smoky-briny accent of Yunnan ham and the clean freshness of spring onion julienne. Aromatic Jasmine Tea was chosen to match this heavenly treat. 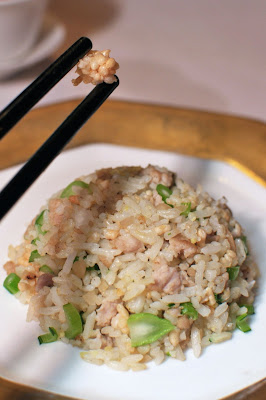 Even a humble dish like Fried Rice becomes an artisanal masterpiece in Chef Chan's hands. To give the speciality extra crunch, the ingenious chef incorporated chopped preserved vegetable and his own Rice Crispies into the equation. He explained that the puffy rice grains are made by drying cooked rice overnight and then deep-frying the grains again. Every mouthful is akin to eating tasty cooked rice embedded with 'pop corn' rice! Yummy! 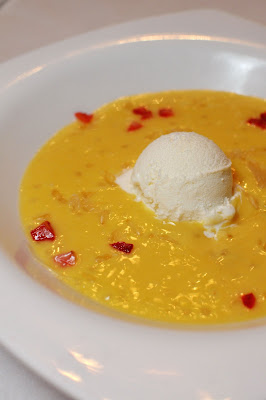 Ending our dinner on a high was Mango Puree with Pomelo and Ice Cream - the brilliant yellow dessert literally had us licking our plates clean...quite apt since the sunny hue was all the rage now! LOL ^^ 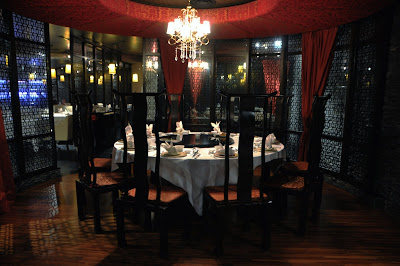 Ensconced in comfort ... one of Zing's semi-private dining rooms

The special tea pairing menu (RM248++ per person) by Master Chef Chan Kwok and his protégé Chung Kap Fai from Hua Ting Singapore will be served at Zing from now until 23 July. Selected dishes are also available in a special a la carte menu.