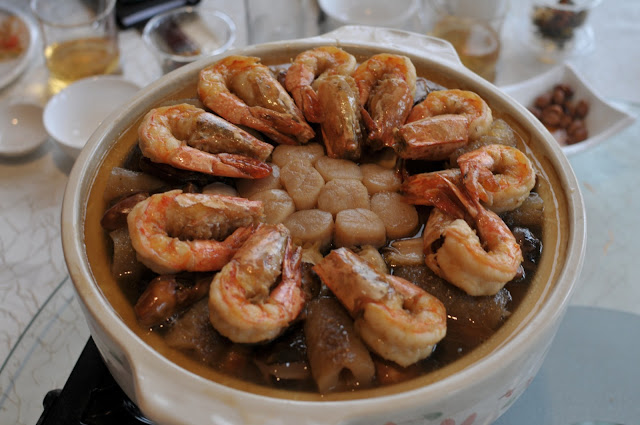 Di Wei doled out a potted feast of goodies for its CNY preview recently and we were among the lucky few who got a generous sampling of it. 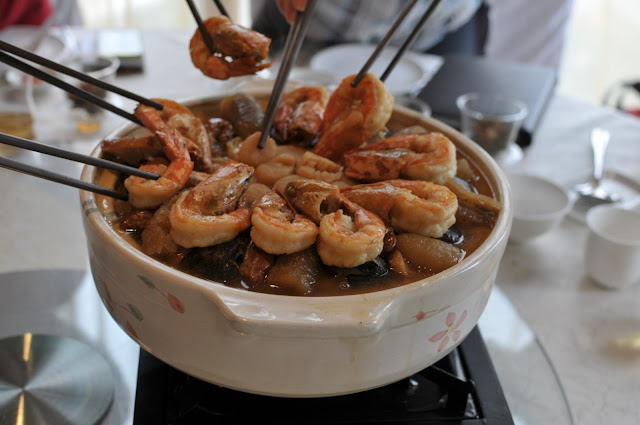 The piece de resistance that took centrestage was Poon Choy. Literally translated, it means basin of goodies in Cantonese. Legend has it that this treasure trove of a feast was created to honour a Chinese emperor who sought shelter from a storm in a remote fishing village. Despite the rural folks'  own hardship, they managed to pool together their scant bounty in a wooden basin which resulted in an unexpected luxe offering that befitted their royal guest.

This hearty dish started to gain a local following during the CNY period a few years ago, with different chefs  lending his own touches to the speciality. Of course the presentation nowadays is more refined; the multiple layers yielding a veritable range of seafood, meat and vegetable items. 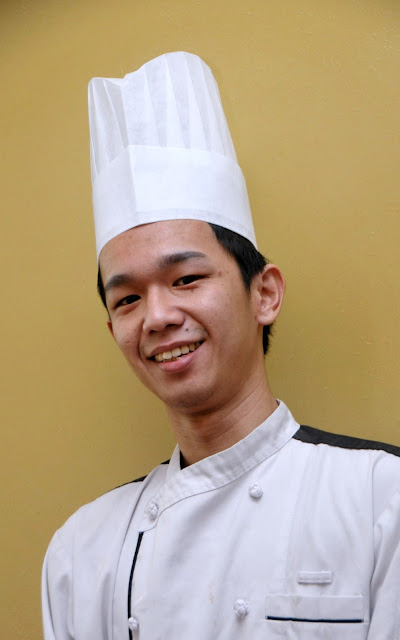 Chef Thian Taik Yong sets out to impress by placing premium seafood such as Australian abalone, dried scallops, sea cucumber, semi dried oysters, fish maw and prawns on the upper most layer. These sumptuous treats are sublime and hit the spot well; their deep-seated oceanic sweetness and cornucopia of slippery, bouncy and chewy textures soul-satisfying good. 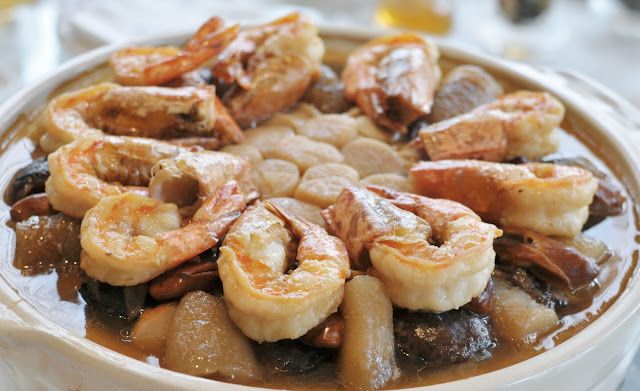 Working our way through to the other layers underneath was like going on a treasure hunt ...every scoop elicited squeals of delight as we took turns digging into the huge bubbling pot. We found bamboo pith, fish cakes, mushrooms, pork knuckle, roast duck, roast pork, chicken, waxed meat, seamoss, tau kan, yam and radish. With so many ingredients thrown in, the gravy tasted out of this world. Priced from RM388++ onwards (available in two sizes), you'd need to give the restaurant a day's advance notice to order the Poon Choy for eat-in or takeaway. 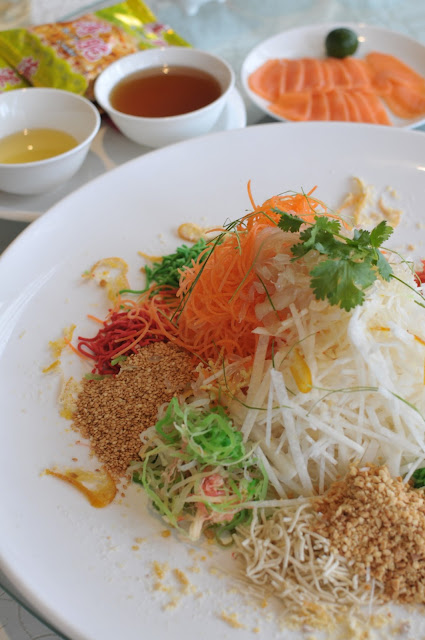 Earlier we had a boisterous round of loh sang to stir up hopeful wishes for prosperity, luck and fortune with a plate of Di Wei's Yee Sang. Featuring 18 ingredients and a special sauce concocted from green apple puree, we discerned hints of warming ginger and sweetness of snow pear amidst the hodge-podge of pickles, crisps and fresh julienne of vegetables. 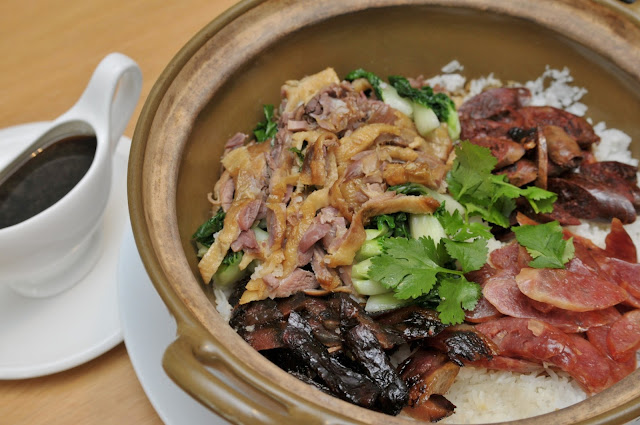 Leaving nothing to chance, Carol Chin who's the Empire Hotel's marcomm lady ensured our lunch included a big claypot of Waxed Meat Rice - a customary delight that no rice-loving Malaysians can resist. Especially when it comes laden with waxed meat, liver and pork sausages and waxed duck. Laced with a fragrant concoction of soya sauce, you can scarfed down bowls of it in one sitting. 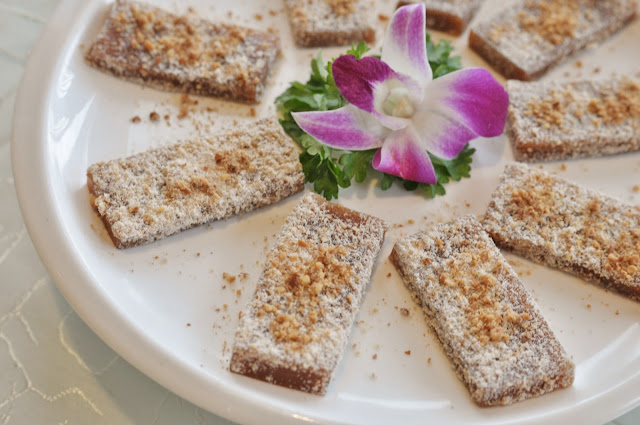 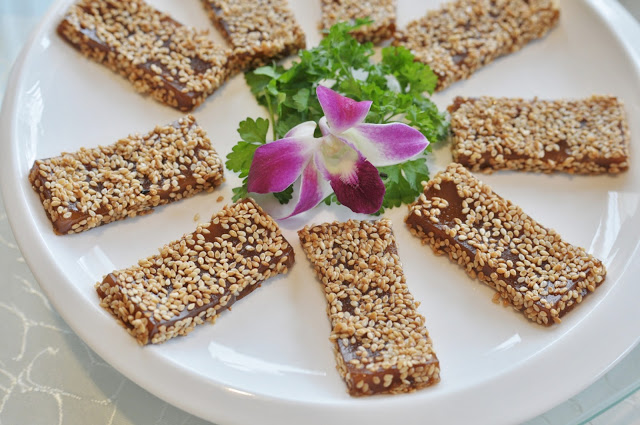 For the sweet toothed, CNY is the season for Nin Koh - the sticky sweet glutinous rice cakes that are sliced and either steamed and served with grated coconut or fried after being lightly dipped in egg batter. The chef opted to embellish rectangular pieces of the festive sweet with dessicated coconut and crushed peanuts while another serving came coated with sesame seeds. 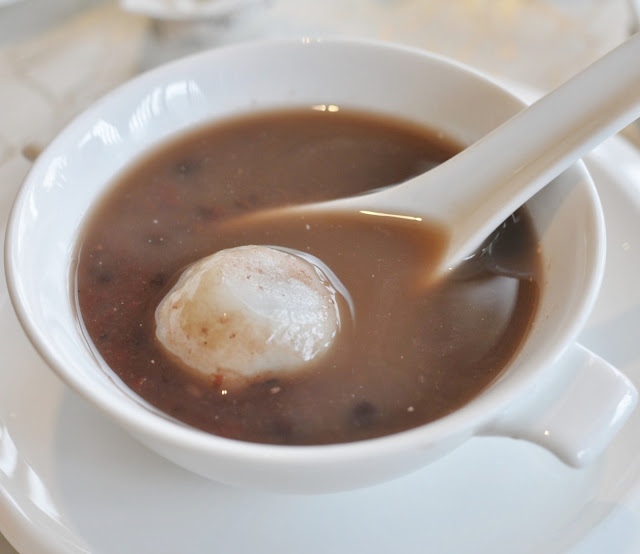 To accompany this traditional delicacy, we were plied with Red Bean Soup with Glutinous Rice Ball (its centre has a liquidy filling of black sesame paste). A perfect round-off to our prosperous feast!

The toppings sure are generous. The first dish looks as though it might fill my tummy from the onset.