There's always a good story behind good food...that's Chef Justin Hor's core philosophy and he's spot on. The savvy director and group executive chef of The Oriental Group is a great story teller with the ability to weave interesting anecdotes and insights into a plethora of signature specialities at the group's latest chapter - Noble Mansion.

Designed to showcase refined Chinese creations for special banquets and private dinners, the posh and artfully furnished interior befittingly mirrors that of an opulent mansion. Several themed private dining rooms, some complete with karaoke facilities are included but it was the central dining enclave that took our breath away with its stunning centrepiece - a bespoke, complex light installation.

"We have many set menus that give first-time diners an overview of what we offer," said Justin Hor who joined us for dinner that evening. "The set menus serve as a sampling of sorts, an introduction of what's good. By their second and subsequent visits, diners will know what to order. Another selling point here is most of Noble Mansion's specialities are drawn from Shunde, Guangzhou - a place famous for its Cantonese dishes and wing chun martial arts that's popularised by exponents like Ip Man."

At the lavish preview, we feasted like nobility; each dish competed for our attention with such imaginative pairing of ingredients and inventive approach that our heads were left spinning from all that creative sparks. 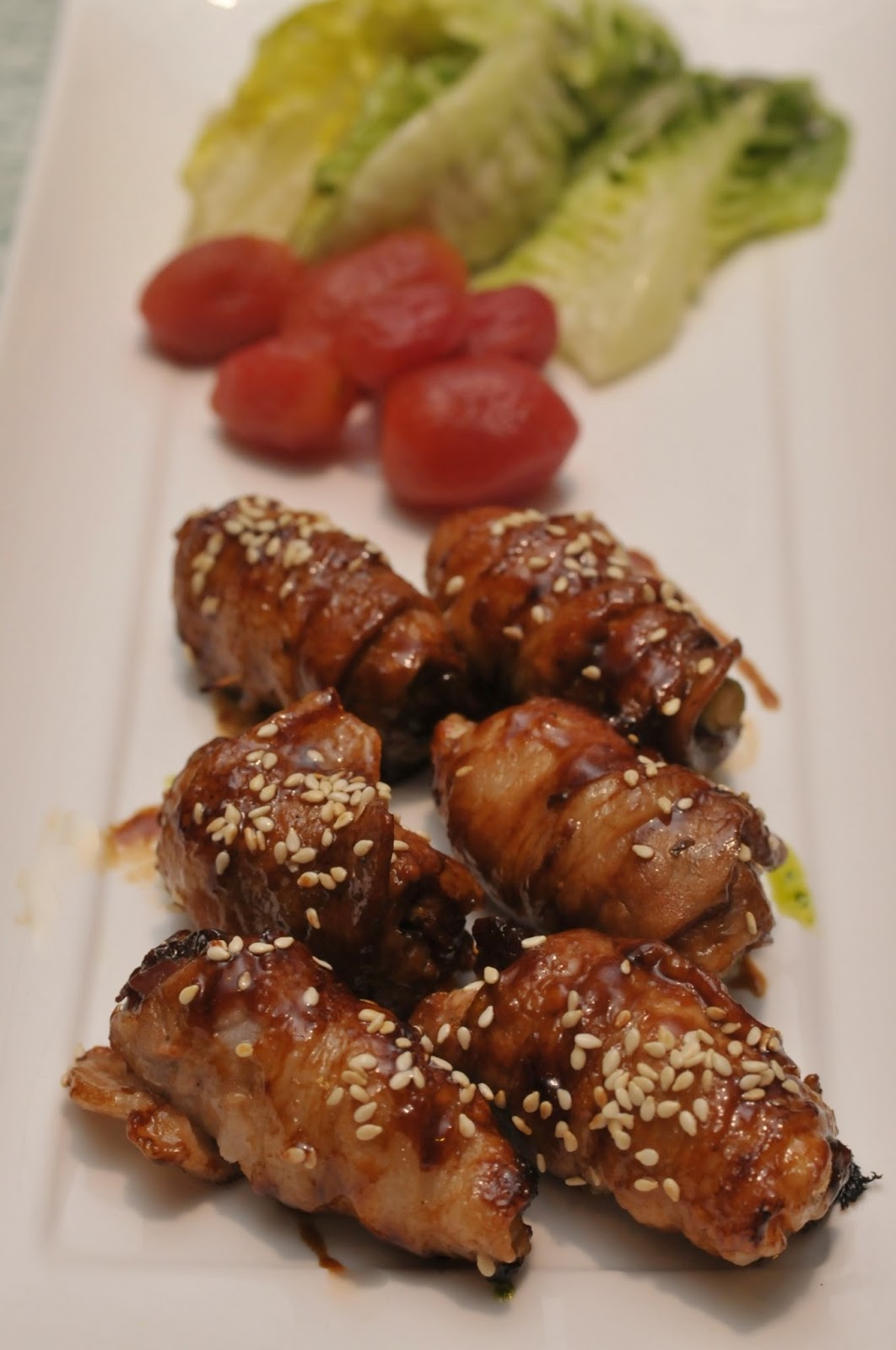 Roll call...porky curtain-raiser to tickle the tastebuds
As expected, the scrumptious porky rolls left us in rapture over their delicious richness. We even polished off the crunchy cos lettuce tossed in a creamy, peppery dressing and skinned cherry tomatoes that had been marinated a day in preserved asam boi (preserved salted plums) sauce. Yes, they were that good! 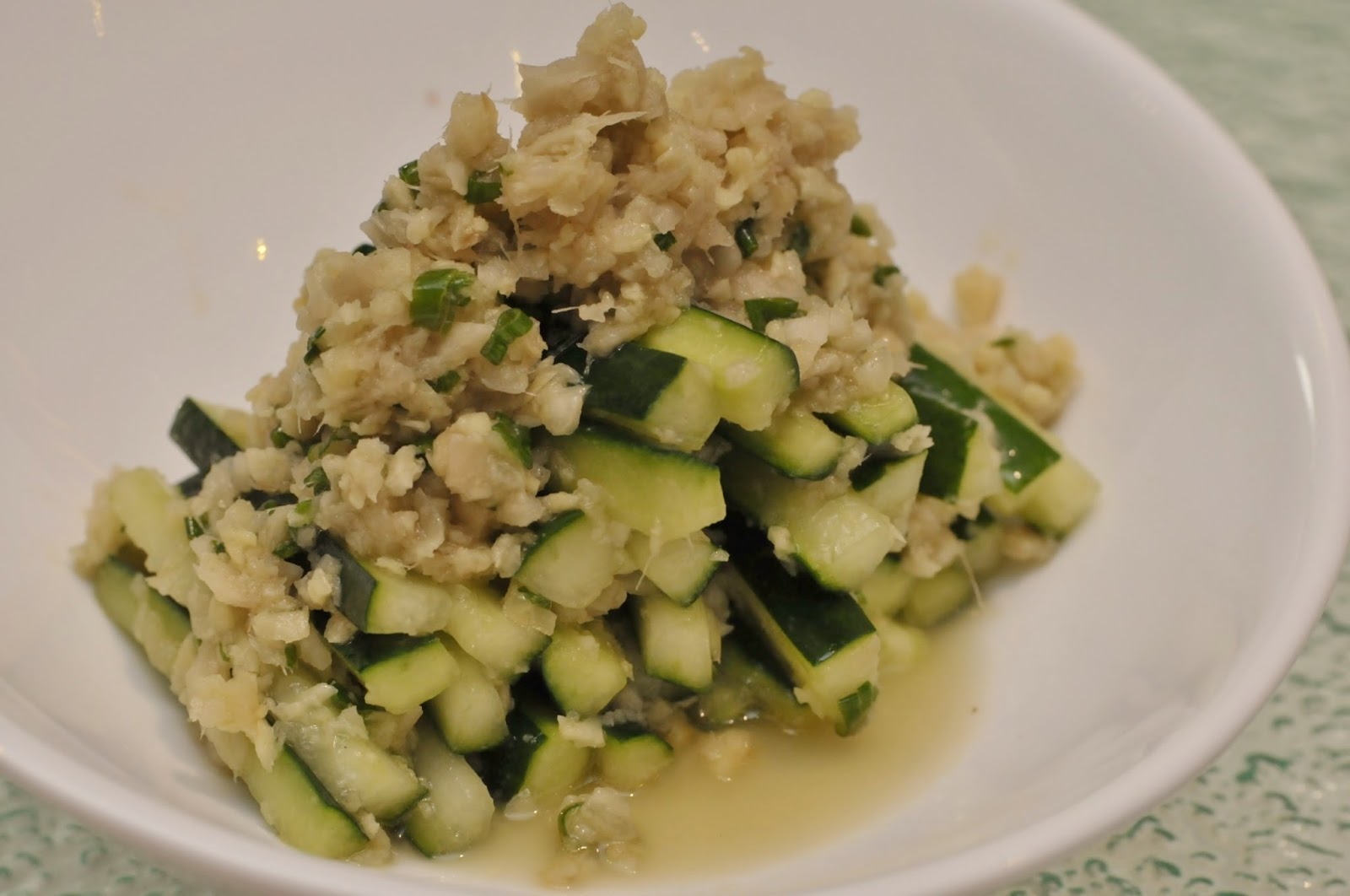 I like the hotness of the chopped young ginger heaped onto the chilled, matchstick-thick Japanese cucumber batonettes. The dish's pared down simplicity was an amalgamation of stimulating hot and cold contrasts on the tongue. 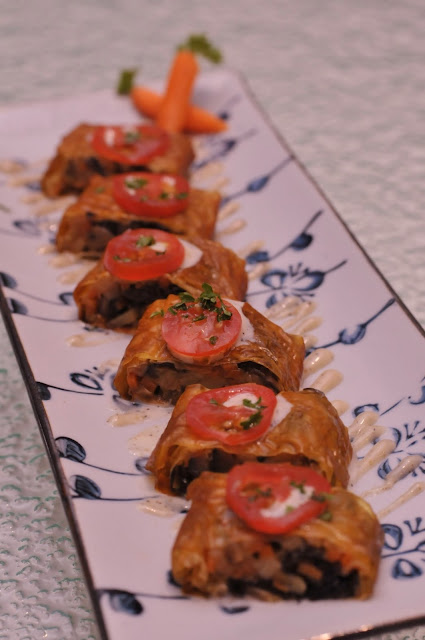 Another delicacy to get wrapped up in is the smoked vegetarian spring roll - an epitome of delicate flavours and subtle crunchy textures that served as a light precusor to pique interest and leave one wishing for more. 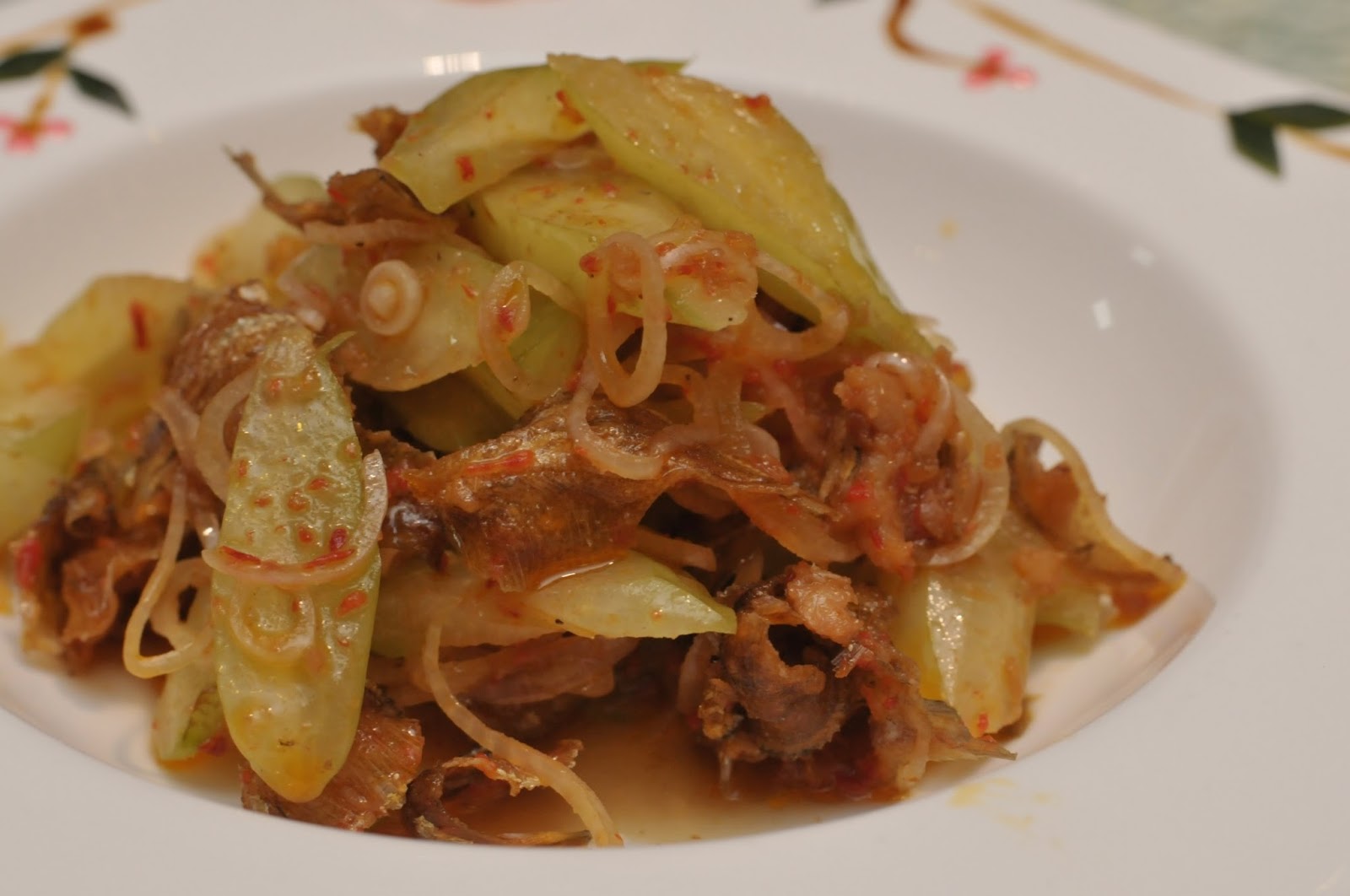 Whetting our appetite further is the incredibly addictive Premium Anchovies & Starfruit in The Oriental's Cincalok Sauce (RM14 per portion) - it's hard to stop nibbling on the juicy chunks of starfruit with crispy, caramelised premium anchovies in a zesty XO-type sauce.
Then dollops of the amber hued lemongrass sauce accompanying the well-marinated BBQ Pork Cheek on Skewers (RM12) lent a barely discernible citrusy accent to the bite-size morsels; something that would have gone fabulously with a glass of crisp white wine. Darn, Kajang satay will never be quite the same ever again after this...
Trust the Chinese to draw out the best in seafood and the Steamed Fresh Water Prawns (RM28 per person) with 8-year old Xiao Shing wine was a perfect example of such ingenuity. Everyone got half a prawn each, the doneness superbly succulent; its inherent sweetness enlivened by some creamy organic egg yolk sauce. 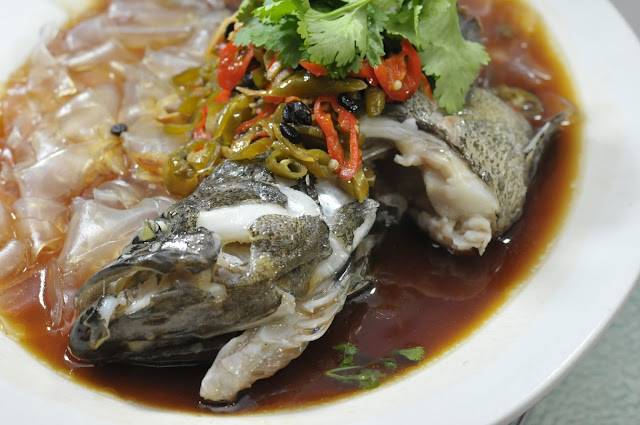 Reeling fish lovers in is Shunde Style Steamed Ocean Garoupa (RM330) perked up with superior soya sauce, black beans, sliced garlic and some sliced pickled red and green chillies. I particularly enjoyed the ribbons of translucent flat noodles that soaked up all the flavourful juices exuded from the firm fleshed fish.

Understandably, in Shunde, the original version is much simpler so Chef Hor has jazzed it up by giving the dish extra colours and greater depth using local accents. He also told us that the chewy noodles weren't identical to the ones in Shunde but the closest alternative he deemed acceptable.

A whole roasted suckling pig (RM330) prepared Macau-style was brought to the table which we fell on after the photo session like hungry wolves. The crisp, crackling skin shone that like lacquer and the layer of well-seasoned, slightly briny meat left us almost gasping in orgasmic ecstasy at every bite. We learned that the chef's secret marinade is so closely guarded that Hor himself personally doles it out each day.


More robust nuances assailed our palates with the appearance of the majestic treat of Lobster with Chicken and Pig's Stomach in Spicy Sauce (RM80 per portion for 4-6 persons). It was akin to eating the perennial steamed village-bred chicken ramped up with the luxurious addition of lobster meat and toothsome slices of pig's stomach. My only complaint was there was too little of this to go around especially the piggy part!
We had a double dose of suckling pig - this time with stuffed with some steamed Glutinuous Rice (RM330), turning it into a substantial dish that left us replete. I was especially happy to be given extra spring onion florets as their bracing sharp nuance helped to counter and balance out the indulgent meaty richness. 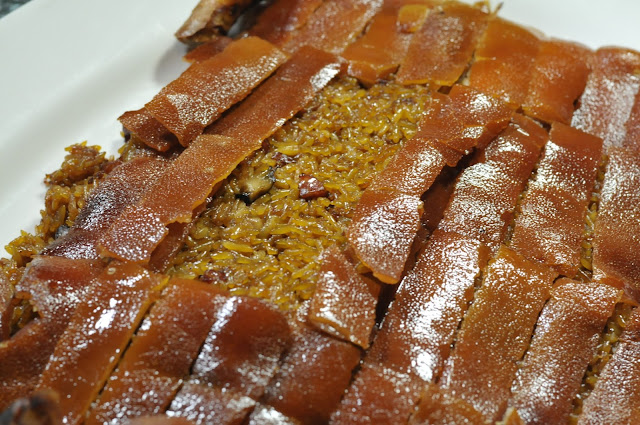 Some Braised Wolfberry Shoot (Gaugei) with Eggs (RM28 per portion) then brought a hint of green to our dinner. The leaves' mildly bitter after taste was tempered by the smooth egg sauce. Hor opined it is imperative to get the saucy texture right "similar to that of soft boiled egg".

To cleanse our palate, glasses of lemon and starfruit juice were proffered. It was a welcome drink that we appreciated for its tart, refreshing tanginess. 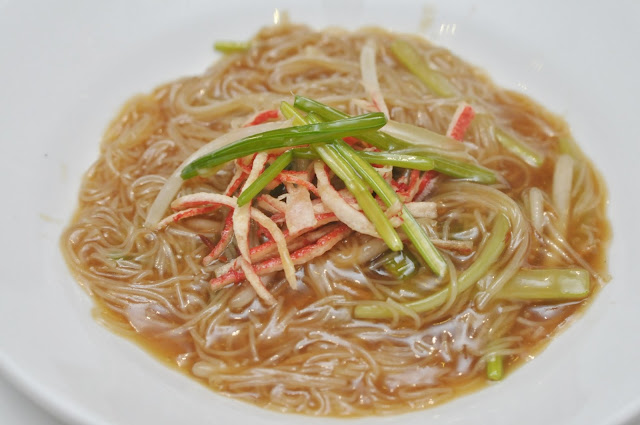 The lavish banquet also had us twirled around Rice Noodles with Abalone Sauce (RM28 per portion, good for 4-6 persons). The dry-fry rice vermicelli came with shredded crabstick, beansprouts and pungent Chinese celery (something I loathe). After all that stupendous dishes we had gobbled down, this noodle was a little unassuming and failed to excite despite the play of different textures. I still lapped up every bit of it though...


Chilled Sweetened Fuji Apple with Snow Jelly, Gingko, Fresh Lily Bulb and Red Dates (RM13 per person) and Longevity Piglet Bun (RM28 for a serving of 4 pcs) rounded up our dining affair with sweet flourish. The dessert broth was light and mercifully mildly sweet while the whimsical piggy shaped buns complete with blushing pink cheeks just begged to be eaten.

The filling even had an element of surprise in it for instead of just pure lotus seed paste, we discovered salted egg yolk in the centre...it was again a playful dimension of tastes and textures. These whimsical buns can be ordered for birthdays and other family celebrations ahead of time.

Thank you PureGlutton for this delicious opportunity to hob nob with the Oriental Group's marketing team whose hospitality is greatly appreciated.

Superbly written, as usual :-) We should go for another round of that Chicken/Lobster/Pig Stomach combo since you didn't have enough of that, haha!

the steamed river prawns & the garoupa definitely got my attention, not to mention that glorious looking piglet

wah... what a feast! oo, I had something similar to the Lobster with Chicken and Pig's Stomach in Spicy Sauce at Lee HOng Kee a few months ago... looks same to me but no lobsters in mine, just prawns... :)

@PureGlutton...tankiu, tankiu! Makes staying up late to finish this post worth it. Oh yeah, won't mind more of the pig's stomach. *slurp*