FIT FOR A PRINCESS 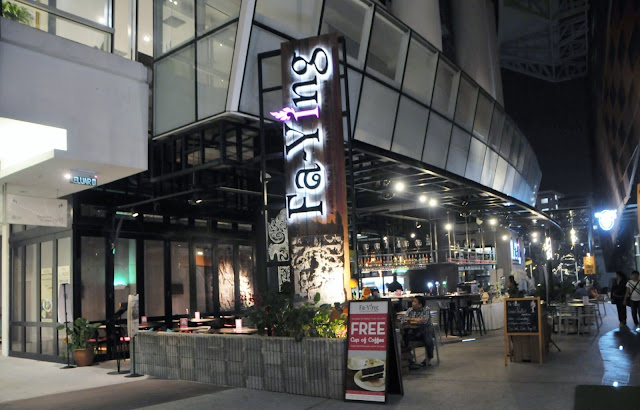 Our mission since we had chosen to accept it was to sample some new creations and fresh interpretations of Fa-Ying's mainstays by newly appointed chef Paphatson Singhakhat (simply known as Chef O at work).

Come September a revamped menu will be in place; old faves will flaunt fresh, playful twists and new creations set to make their debut. 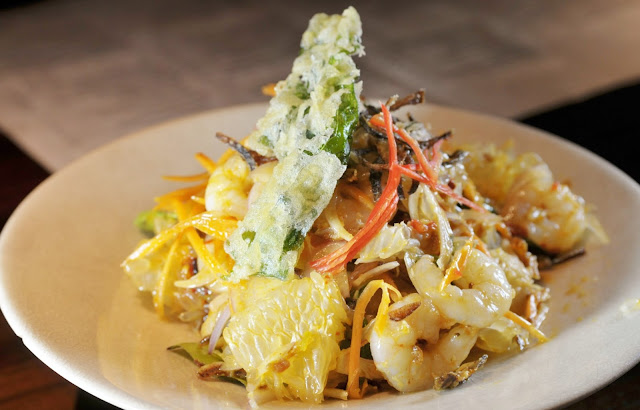 Our refreshing curtain-raisers of Pomelo Salad with Prawns (RM16++) and Thai Watermelon Salad (RM12++) captured all the essential Thai flavours: sour, sweet, briny, spicy and the merest hint of bitterness on that sultry evening.

Thai pomelo is by far sweeter and juicier than local ones and tossed with carrot strips, fried onion and coconut shavings in a tantalising dressing, the enticing combo definitely whets the appetite. 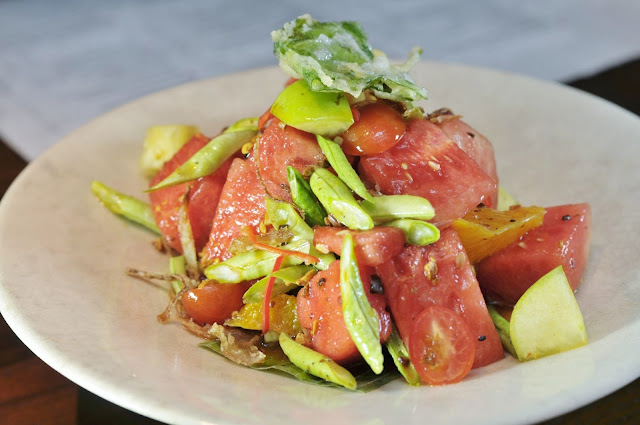 The second is no less ingenious. Who would have thought fresh watermelon cubes can be an outstanding salad when tossed with blanched green beans, cherry tomatoes, green apple and pineapple chunks in a deeply flavourful Thai dressing? 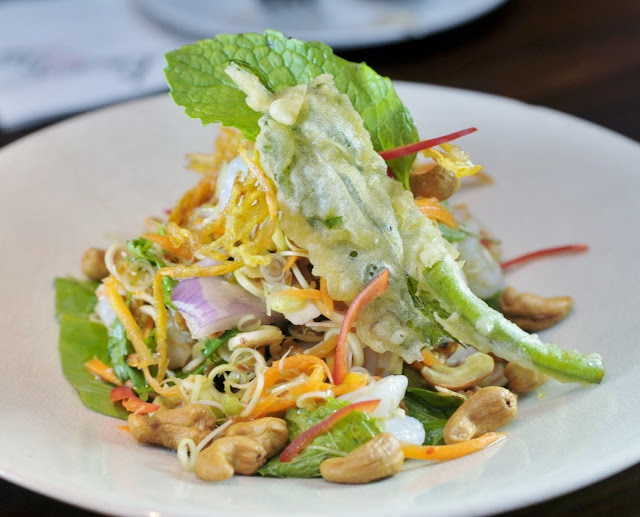 Despite the presence of springy crustaceans and crunchy cashewnuts, I reckon the Lemongrass with Tiger Prawn Salad  (RM22++) may prove quite a mouthful for some. You either love or loathe the chopped lemongrass since it can be a little fibrous and overpowering on the palate. 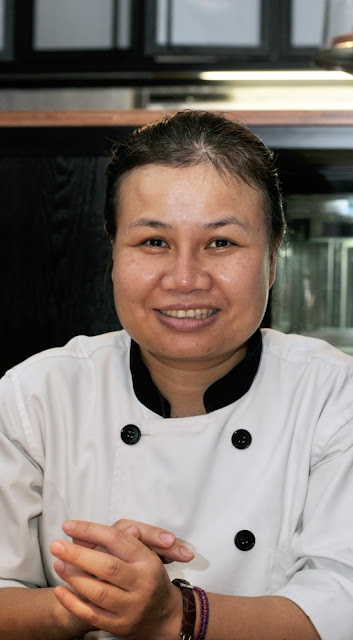 Andre Shum the charismatic owner and GM of Fa-Ying and Rama V is full of beans with Chef O being part of his team. "She has previously worked at the Jim Thompson restaurant in KL and was from The Oriental Bangkok before. I have tasked her to come up with some new dishes and inject her own touches to existing favourites. Also expect more communal-style offerings that allow larger dining groups and families to share effective from September." 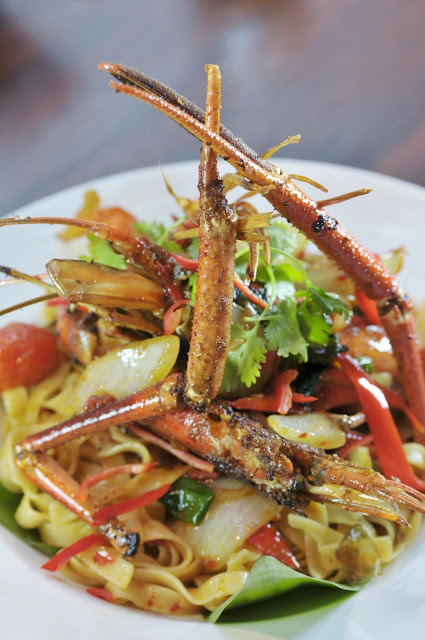 We were privileged to be among the first to savour Chef O's Thai Fettucini with River Prawns - one of the impending new offerings. Smaller than a lobster, the Thai river prawn still bestowed an eye-catching dimension to the flat pasta. Its muted sweetness also lent depth to the robustly flavoured noodles, making it a surefire winner in our book.


Variety's the spice of life here and those partial to small bites will be happy to tickle their tastebuds with notable temptations of Mieng Kam (RM16++), Thai Fish Cake (RM12++), Thai Minced Beef on Cucumber (RM12++)  and Grilled Scallops with Spinach (RM16++). 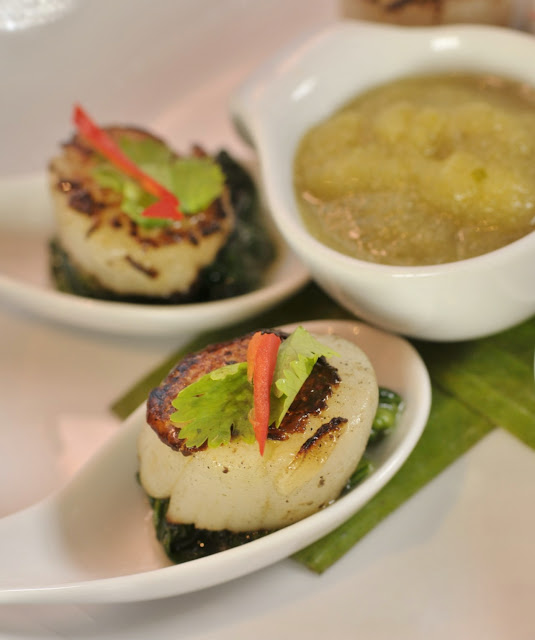 Tender and slightly charred, the scallops on little mounds of blanched spinach is the show-stealer here. Touched with  manow sauce – a piquant spicy-salty-garlicky dressing that amplifies the shellfish's natural sweetness, nobody can resist this...unless they eschew scallops of course. 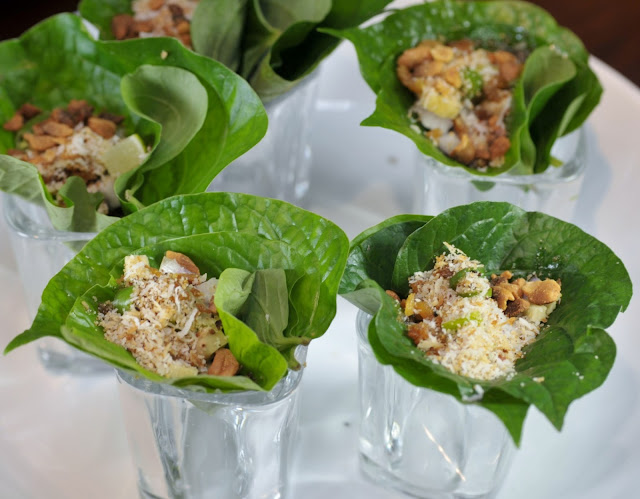 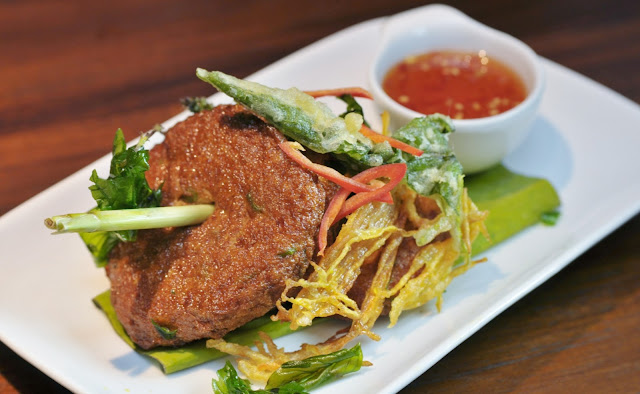 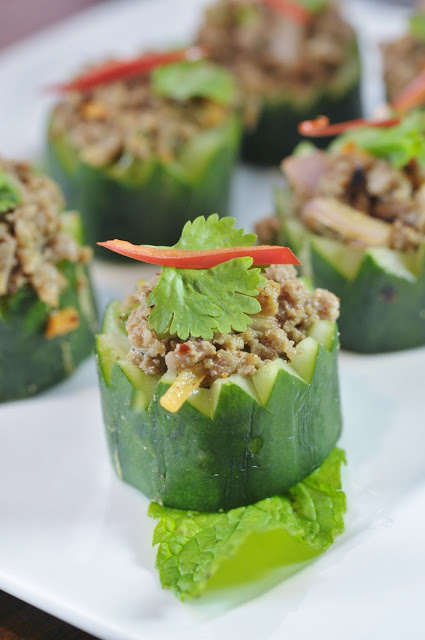 Less common but no less noteworthy is the dainty 'bowls' of cucumber stuffed with minced beef; its tangy-brininess sending an unexpected jolt to the taste receptors when one chews on the meat. 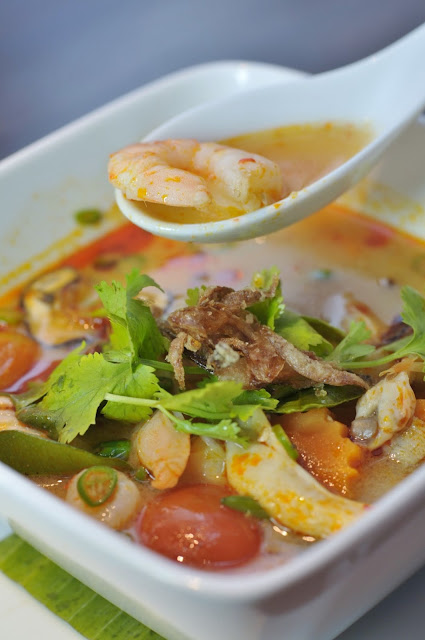 Our tongues were then set ablaze by a sweat-inducing albeit sublime Traditional Tom Yam (RM16++) that's smoothened with some evaporated milk to blunt its fiery hotness. In the soup a treasure trove of seafood, mushroom and carrot slivers awaits. 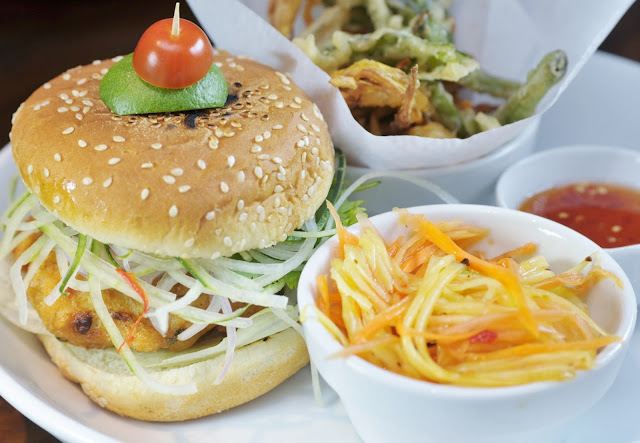 I rank the delectable Thai Crab Cake Burger (RM20++) as a right royal treat that no modern princess or prince can turn their back on. The toothsome crab and minced chicken patty comes sandwiched in a fluffy soft, sesame seed-flecked burger bun, layered with shredded cucumber. Adding scrumptious textural contrasts to it are some som tom (pickled papaya salad) and crispy batter-coated kangkung (water spinach). 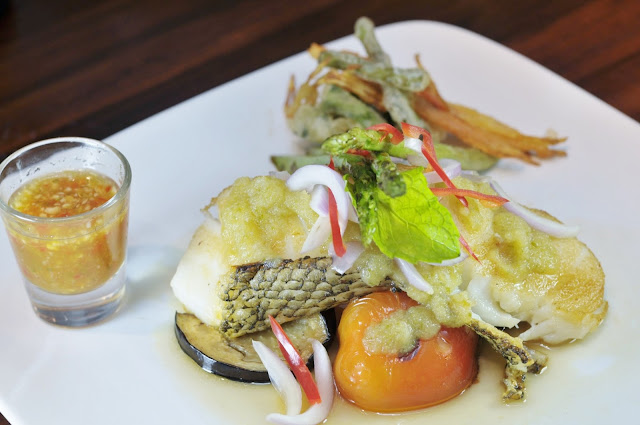 We were ecstatic when the irresistible manow sauce made a return in the Grilled Cod. This mildly acidic, robust sauce balances the fish's inherent oiliness perfectly. A splendid offering that will have you hooked at first bite. 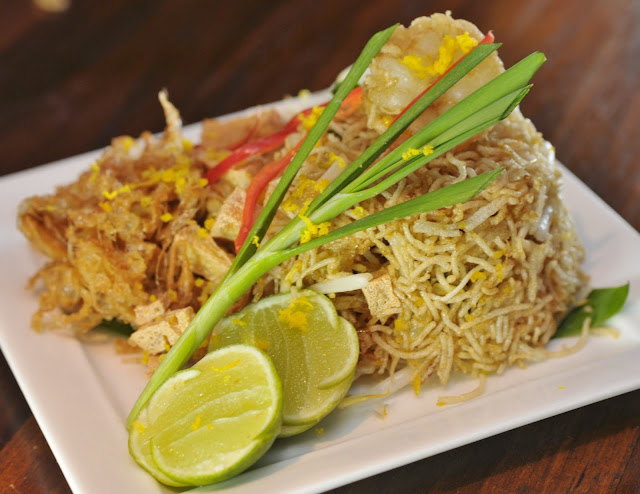 Tea time will also see typical Thai snacks like Mee Krob served for tea. It's been years since I last had this delightful treat so I relished every mouthful of the deep-fried meehoon (rice vermicelli) tossed with wispy, crispy threads of fried egg, diced fried beancurd and beansprouts in sweet-sour tamarind sauce. 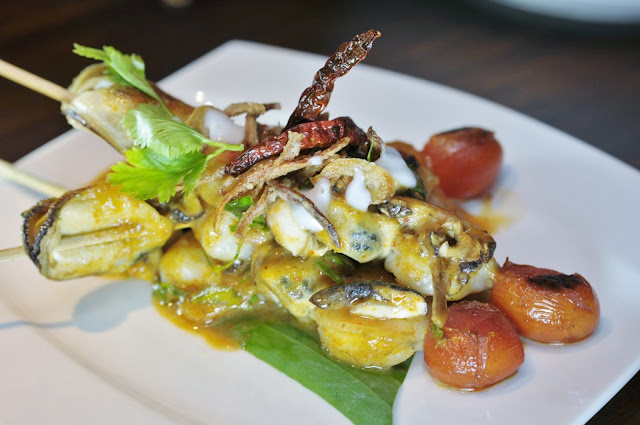 Bar crawlers will find ample sustenance in between tipples with tasty crowd-pleasers such as Mixed Seafood Skewers (RM22++) and Dory Fish Skewers (RM18++). The former easily reeled me in with its spectrum of tender, succulent textures. 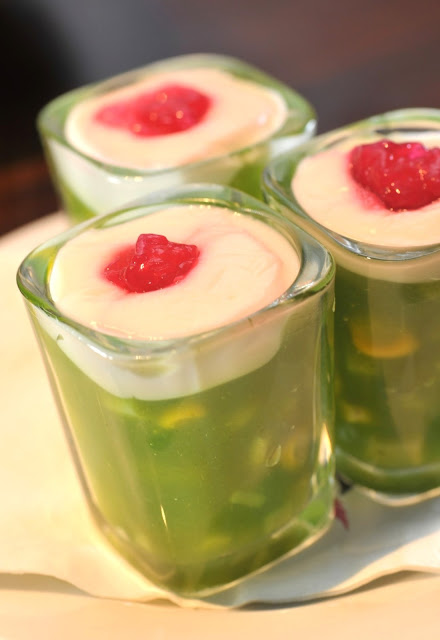 Even familiar Thai dessert such as Tako (RM2.80++) is given a modern makeover, having jettisoned its usual pandan leaf casing for mini glasses and the creamy pudding studded with sweet corn. 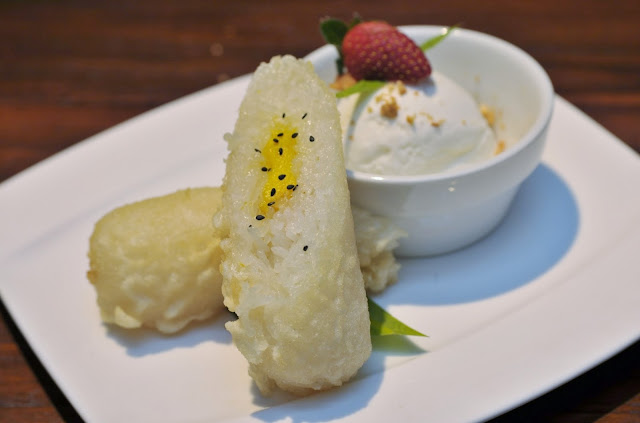 Much more successful and appealing to us is the Deep-fried Mango and Sticky Rice with Ice Cream (RM16++); the ethereal batter coating outside the sticky rice roll giving the dessert additional textural dimension. 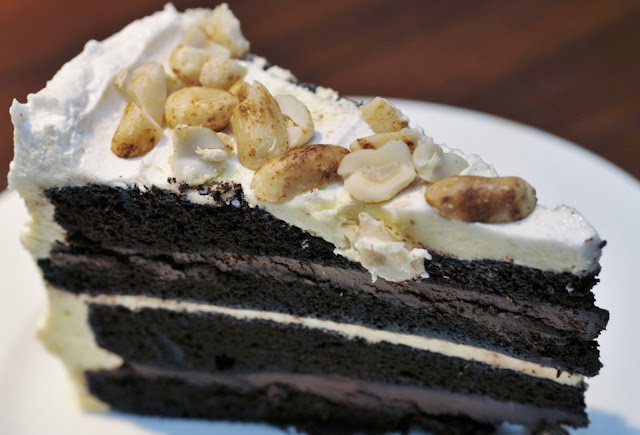 The jewel that crowned our kingly feast was Green Curry Chocolate Cake (RM12++), a luscious confection that tastes way better than it sounds. I won't spoil the surprise and let you guess where the green curry comes in for this one-of-a-kind cake. 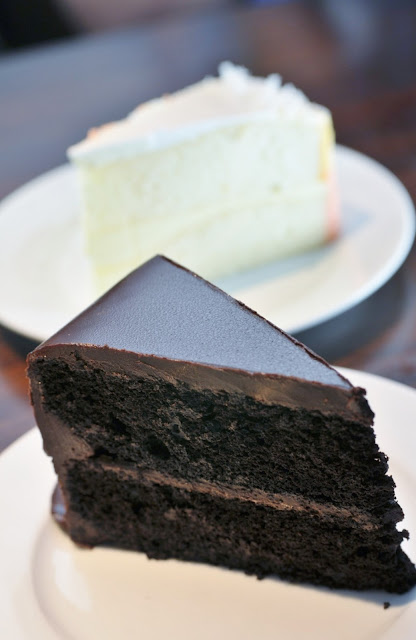 Other indulgences that may pique your interest include Malibu Dream. Just like the classic cocktail it's named after, this alcohol-infused creation will leave you on a happy high. For us rebels without a cause, I'd say the dark and bewitchingly rich Blackout Cake really takes the cake.

Love the food here.. and looks like you guys ate till u dropped! :D

looks appetizing! but waiit.. green curry chocolate cake??? is that even suitable together??? lol really surprising!

@Ciki...yeah it was hard work n quite distracting! Dunno whether to write or eat or photography first. We're such versatile ppl hor? ;D

@Henry Tan...tq for dropping by. You'd be surprised how agreeable it can be. I know I was put off at first but soon changed my mind once I tasted it. Go try it for yourself at least once and make up your mind whether to love or loathe it.

yes we are! haha