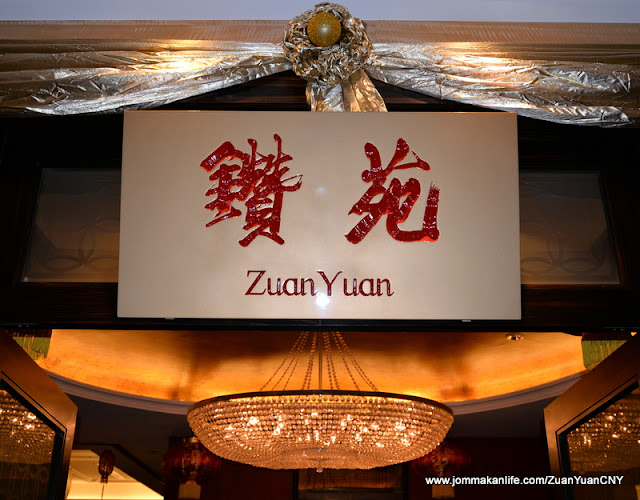 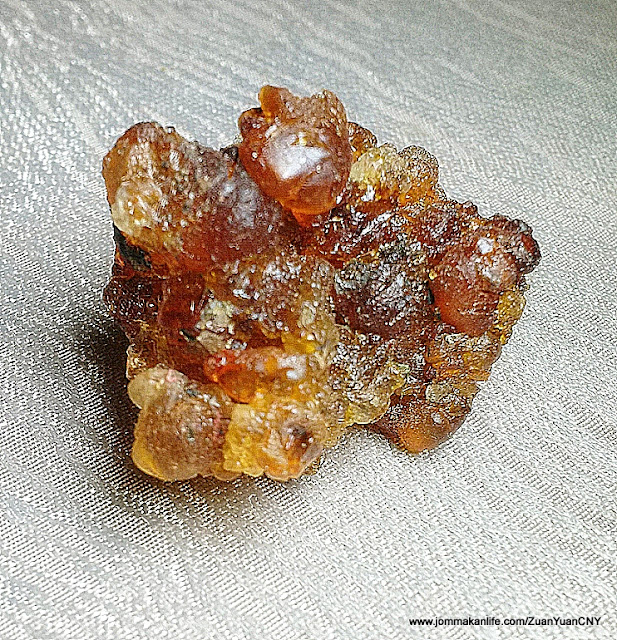 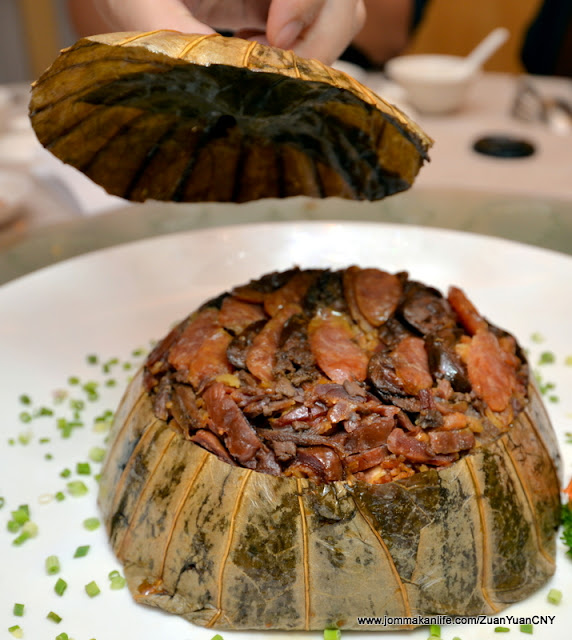 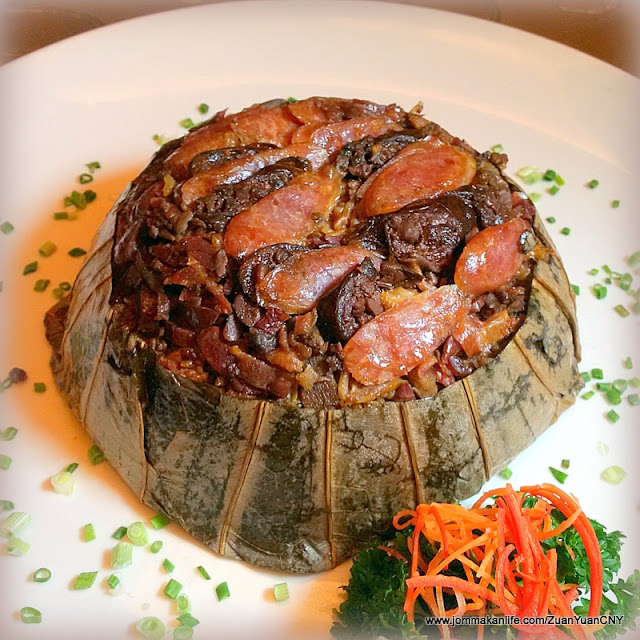 For rice-loving friends who eschew pork, it is the perfect chance to sample lap mei farn. Wrapped and cooked in lotus leaves, the Steamed Rice with Yam, Preserved Meat and Chicken Sausages tasted similar to the real deal but I dare say it was less greasy. Studded with powdery, mushy yam dices, the soya sauce imbued grains were so sedap, most of us had second helpings. 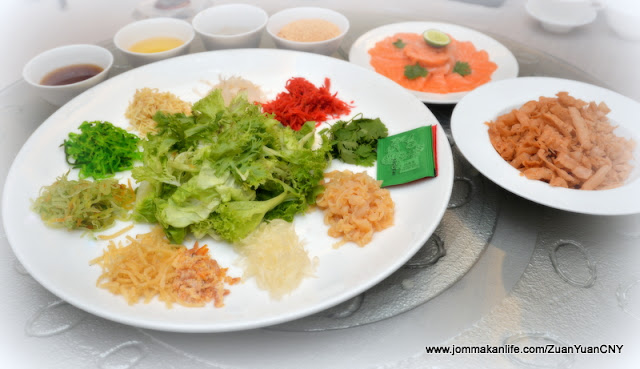 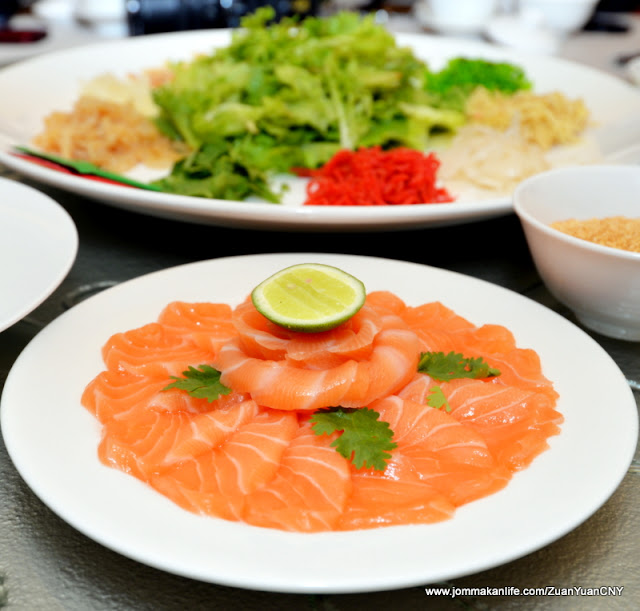 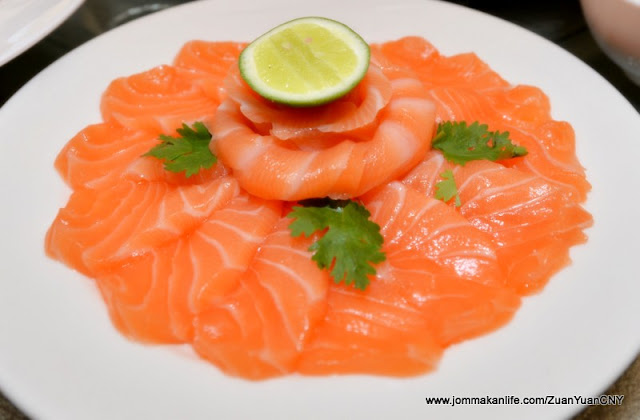 Happily, it was a dream fusion which had balsamic vinegar drizzled on cos lettuce and a dusting of grated parmesan parked alongside more familiar yee sang ingredients (pickles, crisps and other condiments). After a thorough tossing, the distinctive salad drew nothing but praises from our dining party. Three other varieties of yee sang are served: sea bird’s nest with shredded sweet turnip, salmon and shredded sweet turnip or sliced abalone with snow pear. 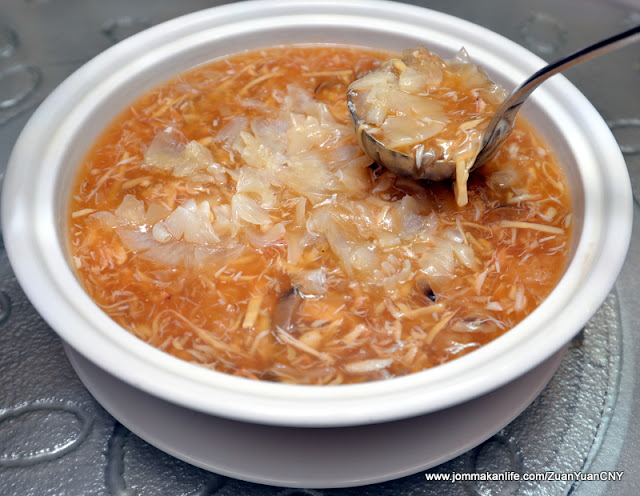 More traditional Chinese folks still demand old school specialities like Braised Shark’s Fin Soup with Sea Treasures so this dish remains on the festive menu for now. Admittedly, times are a-changing with more and more of the younger ones giving the soup a wide berth and opting for alternative broths. 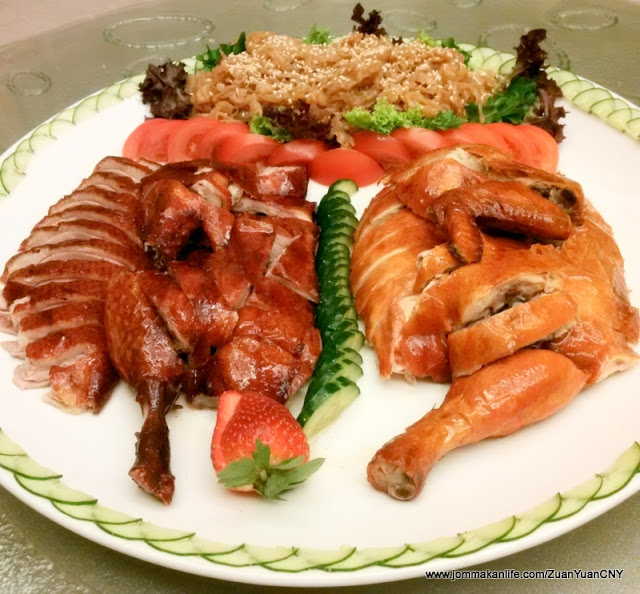 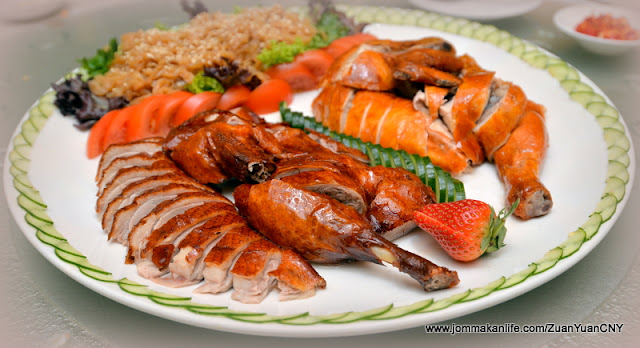 Like any notable Chinese restaurants worth its salt, roasts can make or break their reputation. Zuan Yuan is one resto that passes with flying colours as we swooped in and quickly made short work of the Roast Chicken and Duck platter with Marinated Jellyfish. Juicy and tender to the bite, it was a substantial, scrumptious platter to satisfy us fussy eaters. The crunchy jellyfish had a zingy bite thanks to some chilli oil infused in it. 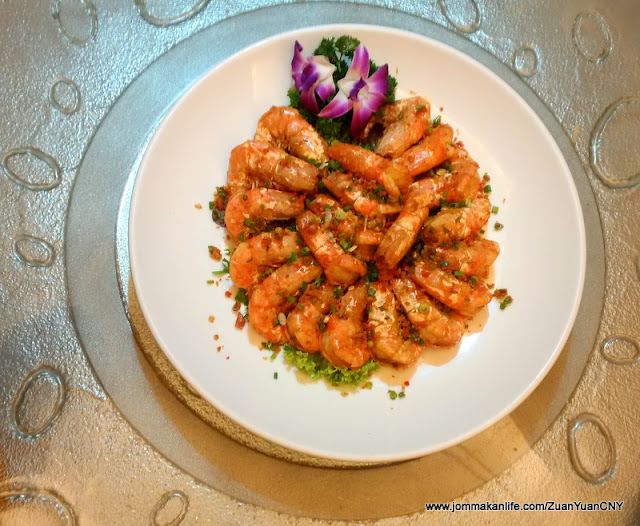 Warm, spice nuances from Vietnamese five spice powder bestowed the Wok Fried Tiger Prawns with appetising flavour and finger-licking deliciousness. Slit in the back, the crustaceans’ clear sweetness stood out amidst the light coating of marinade. 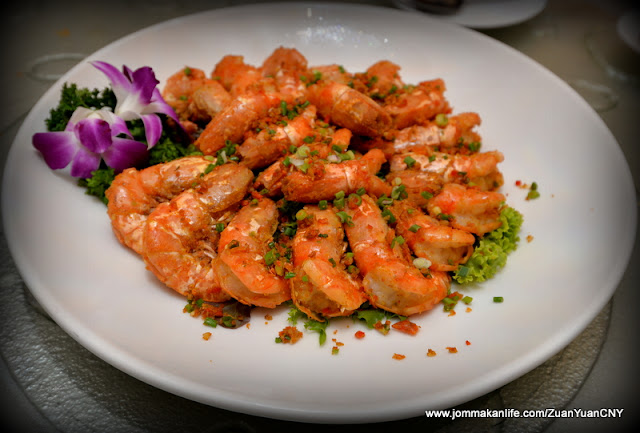 Humble choi poh (preserved radish) together with garlic and chilli formed a simple but comfortingly homey topping to grace the Steamed Star Garoupa. If the fish wasn’t a tad overcooked, it would have tasted out of this world. Still, we picked everything clean so obviously that was a minor bone of contention. 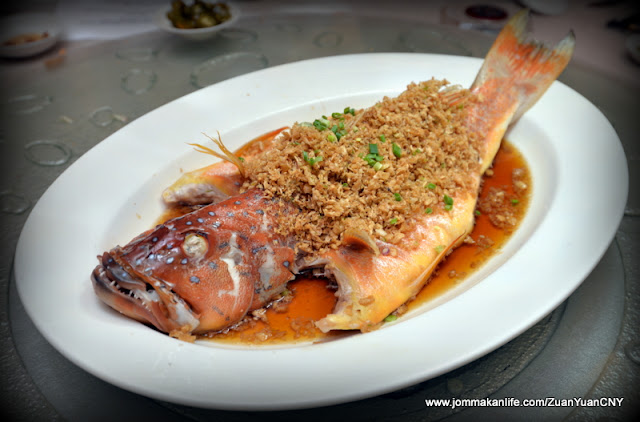 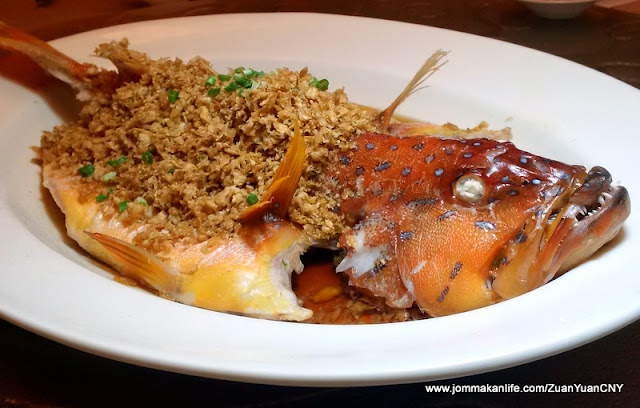 The chefs are wise enough to leave the time-honoured Braised Sliced Abalone, Mushroom, Sea Moss and Beancurd with Garden Greens well alone. We had no complaints as the traditional dish came up to scratch, brimming with hearty woody-earthy-deepsea accents. 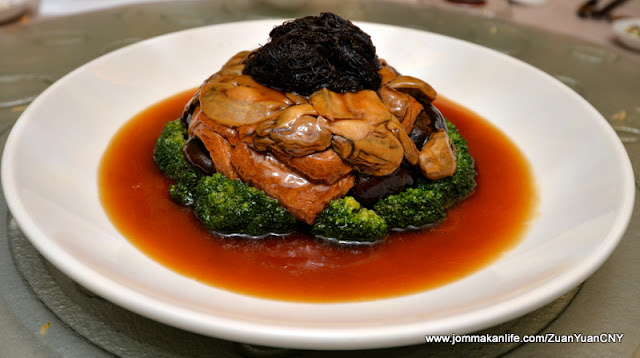 Clumps of reconstituted peach gum lent extra textural interest to the Chilled Sea Coconut with Lotus Seeds, Snow Lotus Seeds and Red Dates. The clumps of peach gum have to be soaked in water for 12 hours before use. In China, it’s used for cooking and baking. We found the mouthfeel similar to hasma; slightly gelatinous like watery agar-agar. 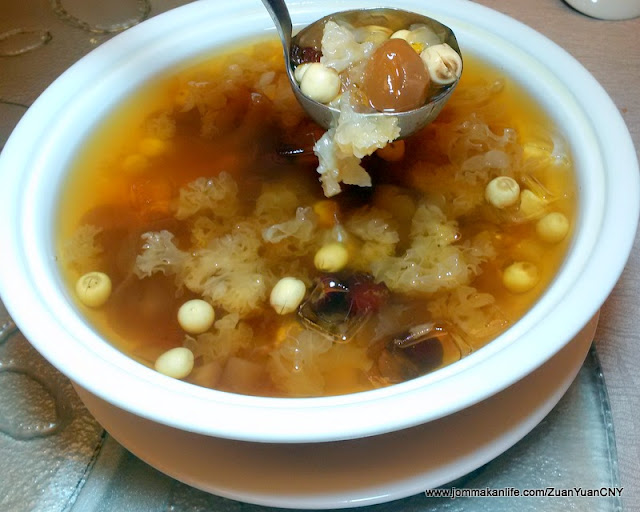 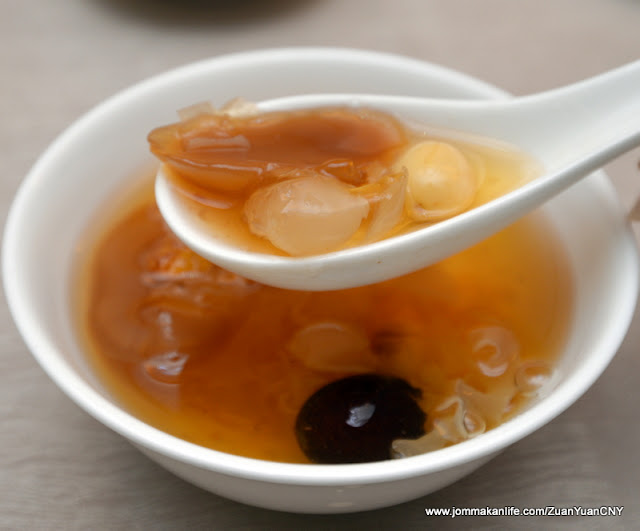 The monkey must have inspired the inclusion of banana cream into Zuan Yuan’s final dessert of Deep-fried Nian Gao with Banana Cream. Sheathed in a crispy yet light batter, I love the sticky glutinous rice melding with the sweet creamy banana mash. 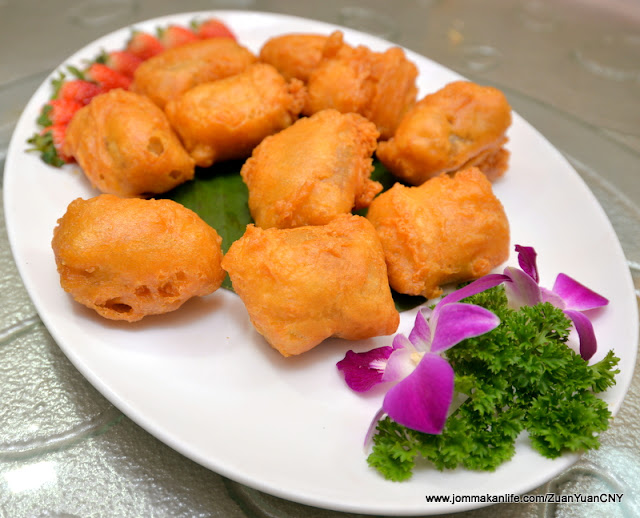 Three Blossom of Happiness CNY set menus are available throughout the CNY period priced at RM1,738, RM1,980 and RM2,210 nett per table of 10 inclusive of two bottles of wine. 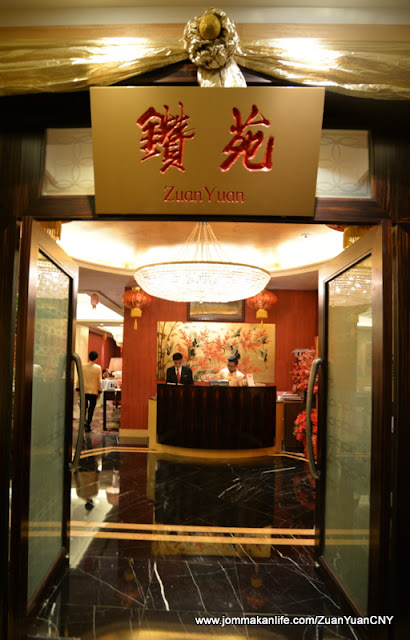