ALL CHOOK UP AT TAI THONG GROUP 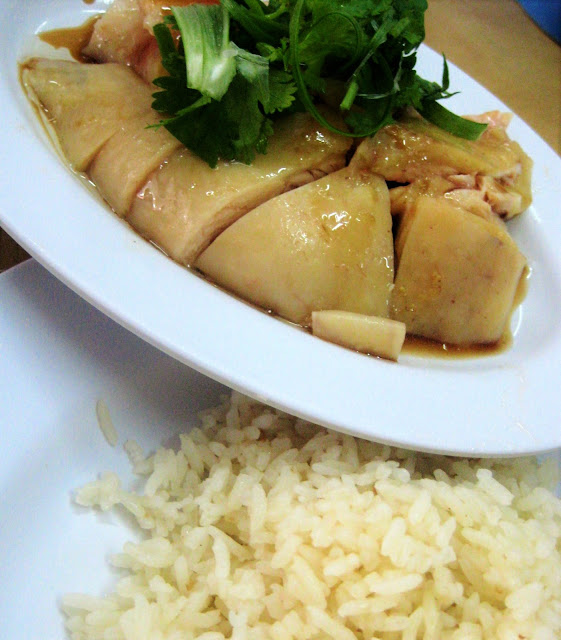 Choi yin gai or free-range chicken has gained some notoriety of late thanks to netizens debating whether they’d fork out a princely sum for Seremban’s famous Chai Hong ‘diamond’ chicken rice. 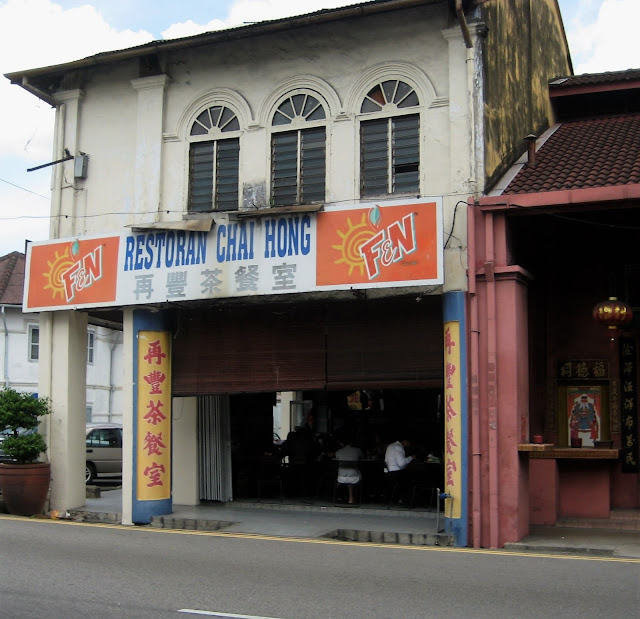 Honestly, whether that chicken rice is pricey or not is rather subjective. Good produce doesn’t come cheap and I can personally attest to the fact that making tasty chicken rice is a painstaking process. What is so wrong with paying for top quality and proud efforts? 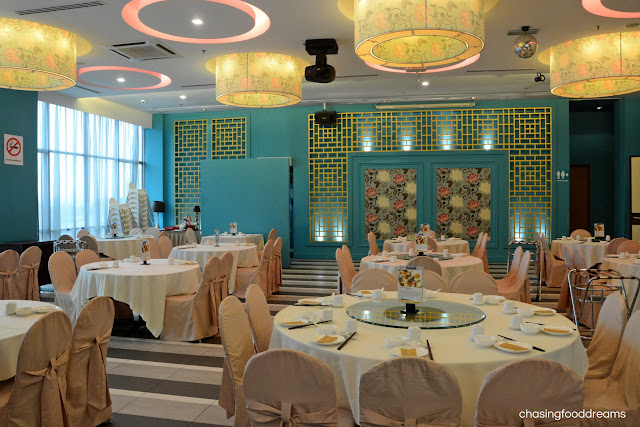 When we were invited to sample Tai Thong Group of Restaurants’ Free Range Chicken promotion, it was an offer nobody could refuse. Executive chef Lee Wee Hong deft preparations for the plump, juicy chooks: Poached Chicken with Fried Shallot Oil and Salt Baked Chicken with Tang Kwei are certainly worth crowing about. 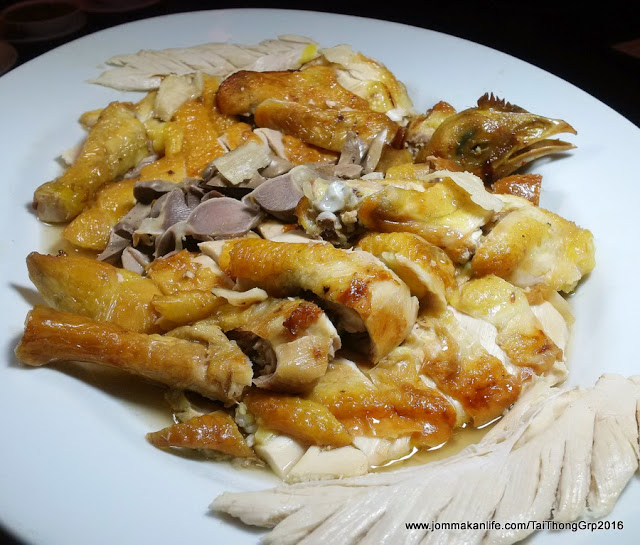 The chef shows full respect for the free range chicken which are sourced from a farm in Semenyih. Fed with spring water, the poultry is given ample time to grow up to the desired weight of about 2kg. Hence the chef only needs to rely on the classic practice of poaching it till cooked. Dressed simply in supreme soya sauce and aromatic fried shallot oil with a scattering of fried shallot on top, the chook’s pale yellow skin and smooth flesh looks appetising. 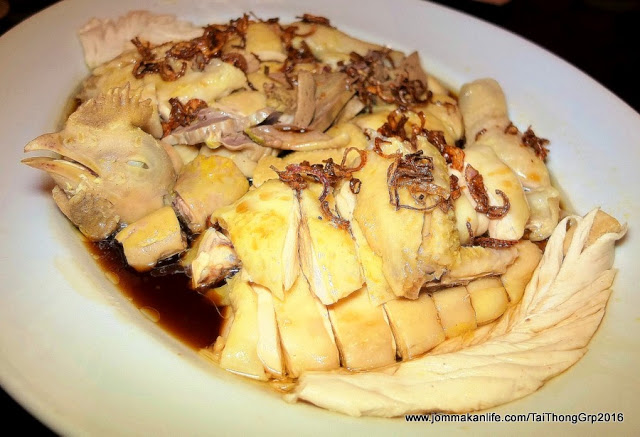 Biting into the tender meat, the sweetness of poached chicken jus blended with mildly briny soy and shallot oil dressing suffused our palate; causing a chorus of ‘oohs’ and ‘aahs’ around the table. The toothsome, springy meat texture and sublime juiciness are similar to kampong-bred chickens of yore that graced major festivals and family celebration tables. 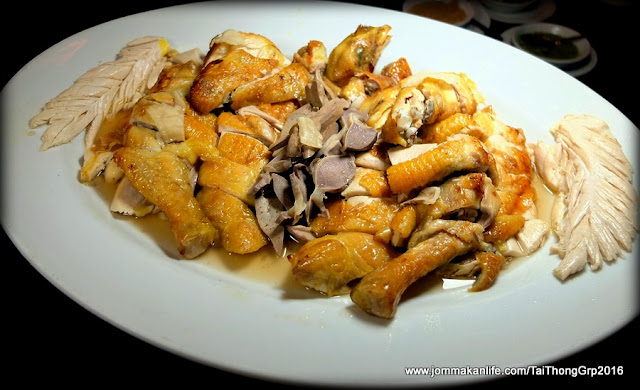 Hints of herbal sweetness of tong kwei (angelica sinesis) prevailed in the salted baked version. We also detected a pleasant tinge of smokiness in the golden yellow skin and deliciously tender meat. Priced at RM48++ for half a bird and RM88++ for whole, the free-range chook is available until further notice. 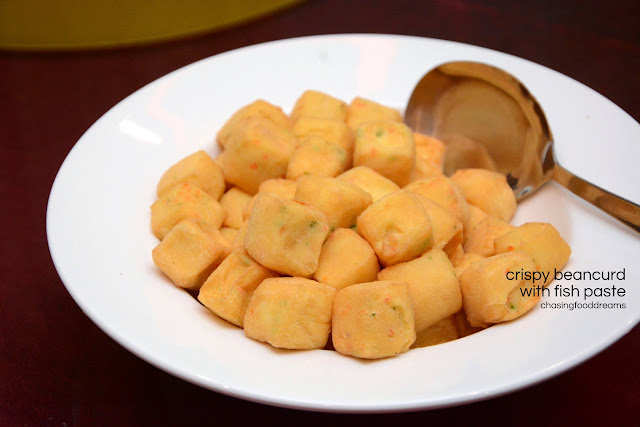 Chef Lee also whipped up his range of signature dishes that evening. Should you wish to sample any, it is advisable to order them in advance to avoid disappointment. We recommend starting with Crispy Beancurd with Fish Paste (RM13++ per portion) to stave off hunger pangs while waiting for mains to arrive. Made from mashed house-made beancurd and fish paste speckled with bits of red chilli, the soft yet crisp cubes of deep-fried beancurd were wickedly addictive. Trust me, it is alarmingly easy to polish off a whole plate within minutes. 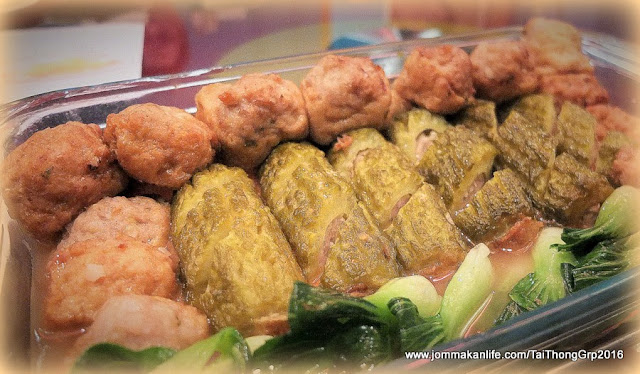 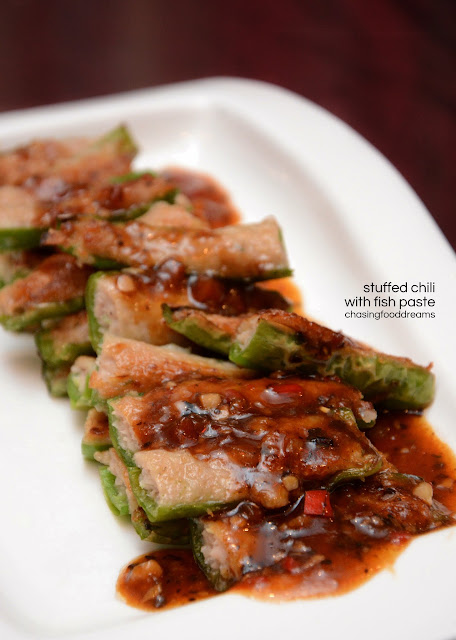 Slathered in a zingy, unctuous black bean sauce, the seared green chillies with fish paste would get the stamp of approval from finicky family matriarchs. Soused in some clear broth and complemented by baby bok choy, the stuffed baby bittergourds and beancurd puffs were equally scrumptious. I particularly enjoyed the fresh astringency of the little bittergourds which cuts through the milieu of rich flavours. 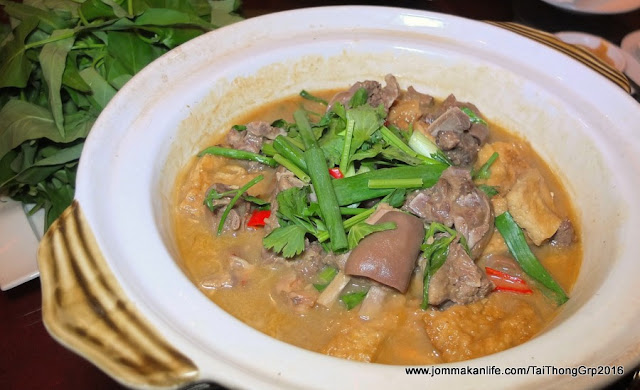 Fu yue or fermented beancurd (the Chinese equivalent of stinky cheese) is the central ingredient in Chef Lee’s Claypot Lamb Stew with Fermented Beancurd and Water Spinach (RM30++). Its assertive savouriness melded with the subtle accents of lemongrass, dried chilli and ginger, to temper the lamb (actually it’s goat meat) gaminess. The chef then brought the leftover gravy to boil before adding some fresh kangkung (water spinach) to it. Once wilted, the crunchy veggie slicked with that umami-rich sauce, created a major stir with us. 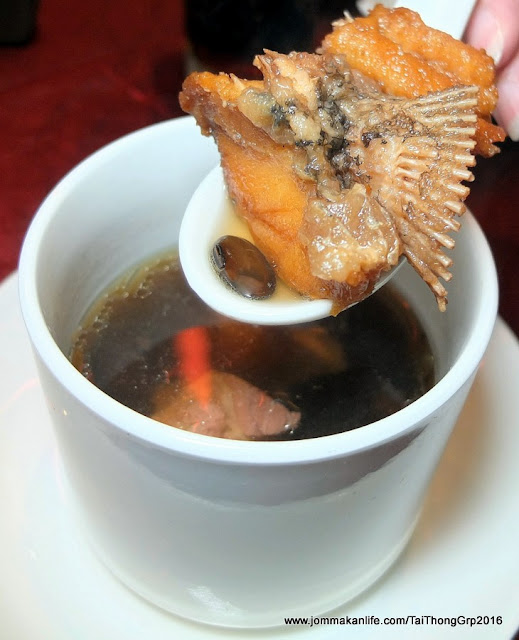 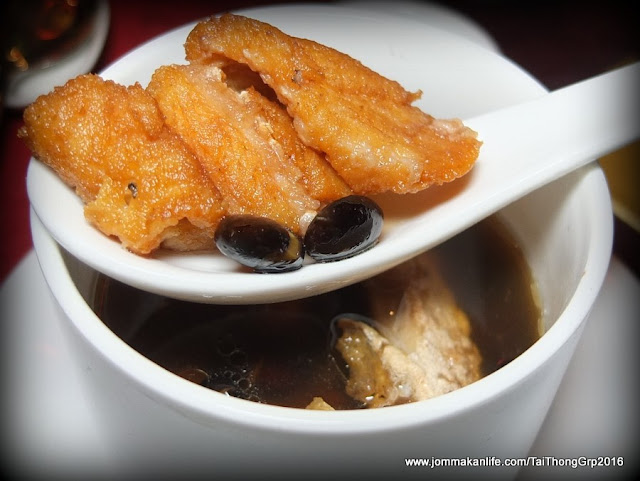 Cleansing our palate with a bowl of Double Boiled Black Beans and Pork Ribs Soup, we slurped up every drop of the heartwarming broth. Chunks of fried fish and red dates lent flavourful depth to the nutritious mixture. 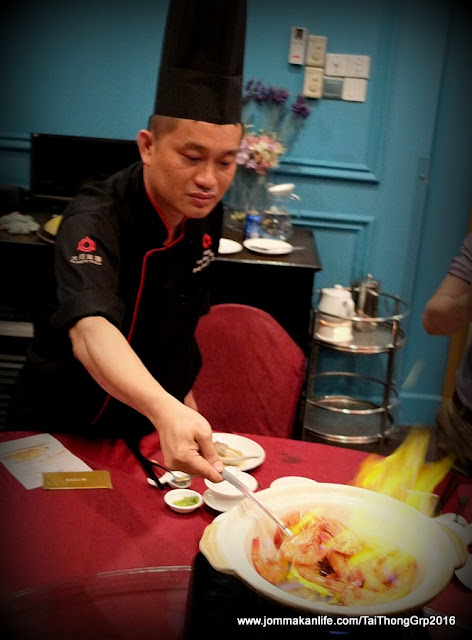 Heady fumes of Chinese wine wafted up as Chef Lee showcased his prowess at cooking Flaming Drunken Tiger Prawns (RM48++ per portion) at the tableside for us. It was an impressive spectacle as bright flames leapt and the claypot hissed and sizzled as he tossed the wine-soaked tiger prawns around. 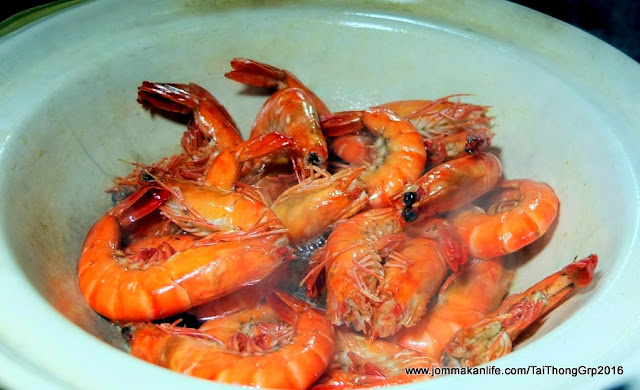 Once the drama has dissipated, we had a field day savouring the sea-sweet, alcoholic tasting crustaceans. It pays to get your hands dirty if you want to derive maximum enjoyment from the shelling of those prawns. 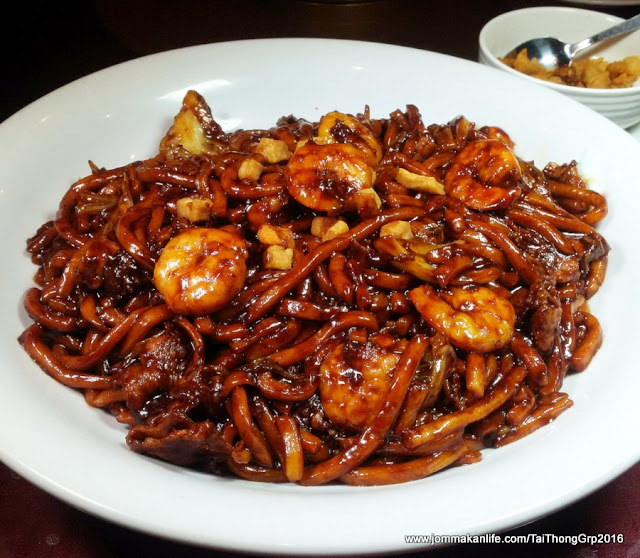 Another home run hit is the lush yet simple offering of Hokkien Mee (RM20++ per portion). Served with a little bowl of crisp deep-fried pork lardons on the side, the noodles with all the requisite ingredients are up to scratch although it has yet to reach that old school benchmark I’m accustomed to. 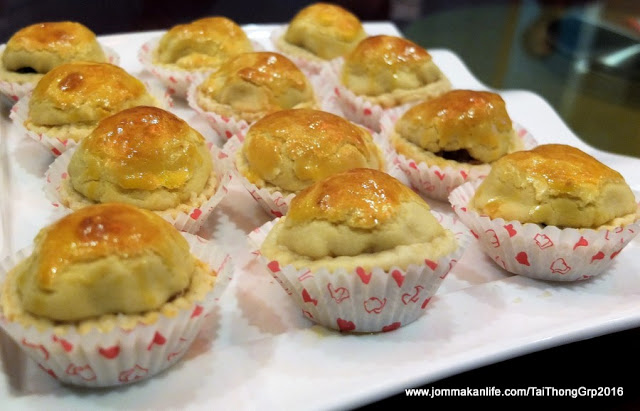 Should you have a chance to eat dim sum at Imperial Garden, be sure to sample some Baked Dried Oyster Tarts (RM8.80++). Dried oysters play a leading role here, tucked away in buttery, flaky pastry shells to tickle the tastebuds. Redolent with concentrated deep-sea accents with fleeting smokiness, the savoury tarts are unforgettable. 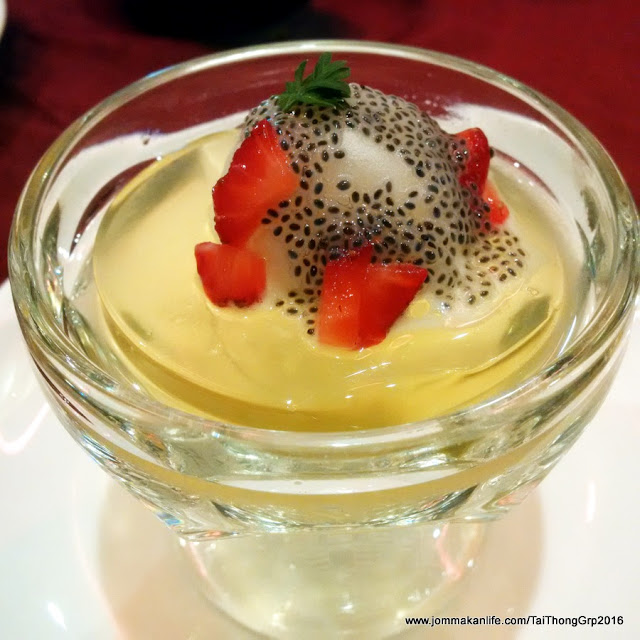 After such a sumptuous feast, we found light, sweet succour in a glass of Chilled Lemongrass Jelly. The citrusy nuance was amplified by the ice cream while gelatinous basil seeds gave the pudding subtle crunch, completing our dining affair on a delightful note.

love these type of places that serves old school dishes.