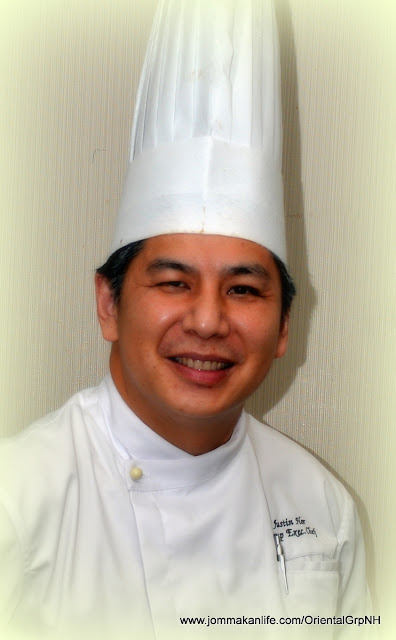 Justin Hor is undoubtedly Malaysia's most progressive, dynamic and well-respected Chinese chef today. As the Group Executive Chef and co-founder of The Oriental Group of Restaurants, his name is what the Chinese decrees as 'sou yat, sou yi' - literally second to none in the cut-throat and insanely competitive F&B scene. 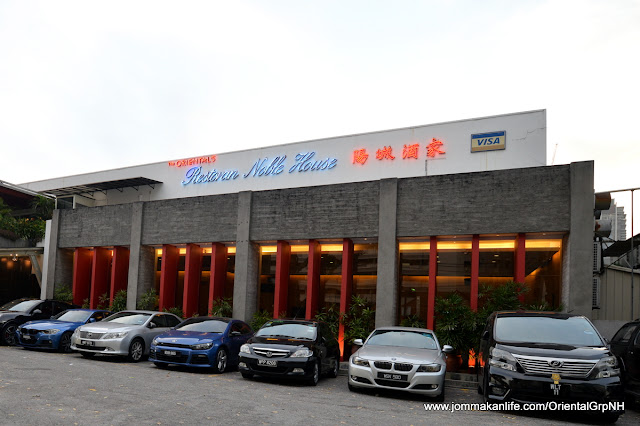 I still recall the buzz surrounding the opening of Noble House, one of The Oriental Group's earliest culinary bastion in KL. Well, 16 years later the resto group has grown by leaps and bounds yet the group's sterling reputation remains intact and as revered as ever. To celebrate its 16th year of Chinese culinary excellence, The Oriental Group spearheaded by Chef Justin Hor is offering a selection of age-old dishes updated for current times specially for customers to savour. 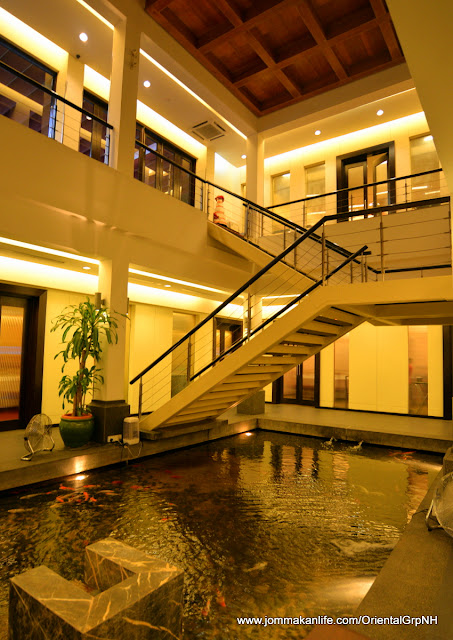 That was how us lucky few ended up at Noble House, for a sampling of the special celebratory menu. For the uninitiated, the impressive interior on the lower ground level is dominated by a koi-filled pond and gurgling water features. Upstairs, a warren of cosy private rooms allow customers to dine in comfort. Wheelchair-bound and infirm guests can even enjoy hassle-free access to the resto via a lift to transport them upstairs. 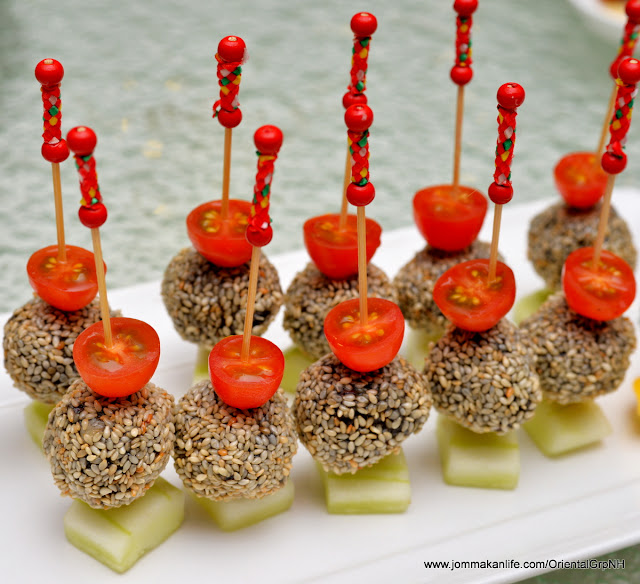 I was often asked what I like to eat most as a food writer. As a typical Chinese, I believe Chinese food trumps 'em all. Never mind if Chinese cuisine doesn't have the same cachet as French or Japanese in the eyes of the world. Fyi, Chinese cuisine is far more intricate and complex yet it remains sorely undervalued in today's culinary stage. Hence more Chinese food proponents like Chef Justin Hor helps tremendously to raise the cuisine to fresh gastronomic heights and give it extra shine. 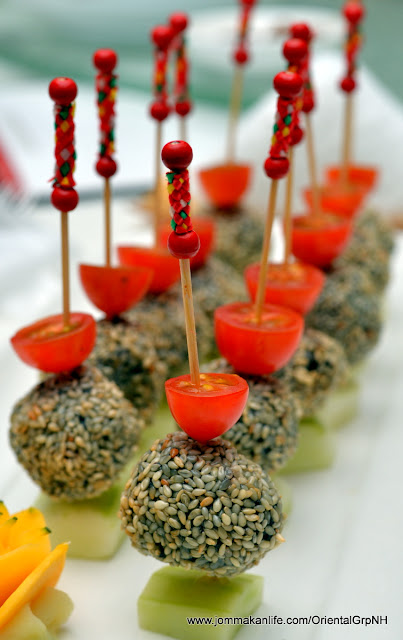 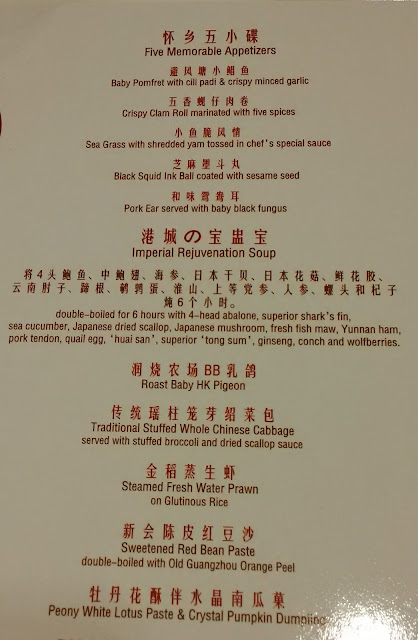 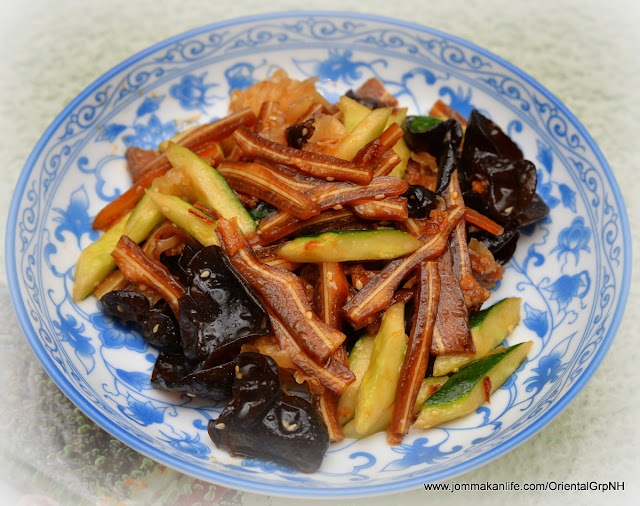 For the second appetiser, Chef Justin decided to give classic braised pig's ear a fresh spin, reinterpreting it as a crunchy Chinese salad of Pig's Ear with Baby Black Fungus. Sliced into strips, the slightly resistant cartilage pieces tossed with baby black fungus and Japanese cucumber chunks were light yet tantalising to sample. 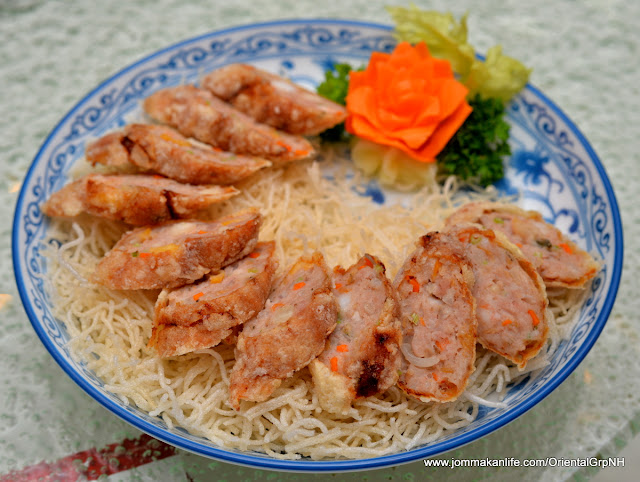 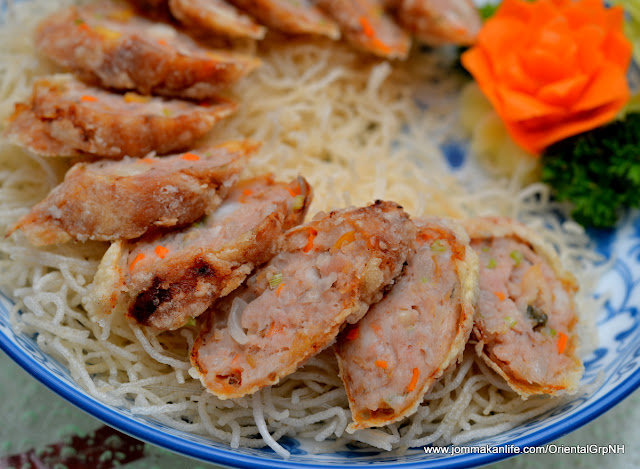 Likewise, he tweaked the old-school 'hai jou' (crab meat dumpling rolls) by adding clams into the filling. Enmeshed in pig's caul, the deep-fried and sliced Crispy Clam Rolls with Five Spices yielded an irresistibly good mix of minced pork, clams, waterchestnuts and five spice powder. A delectable creation that would induce anyone to polish off a whole plate! 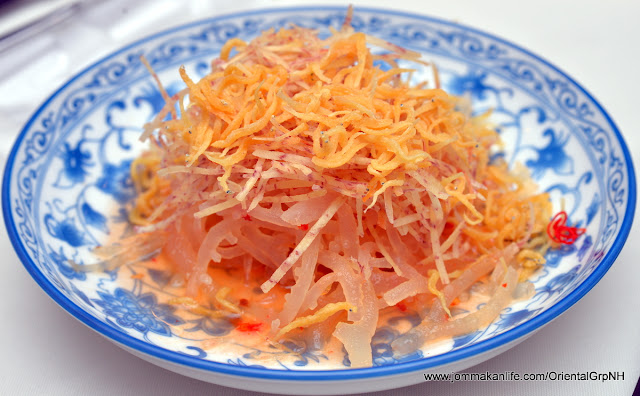 Inspired by a trip to Tawau, Chef Justin whipped up a distinctive kerabu-style salad of Sea Grass with Shredded Yam. Tossed in piquantly sour-hot Chef's special sauce, we relished the multitude of crunchy textures: that of tiny silverfish, thin strips of yam and sea grass (also known as sea bird's nest). 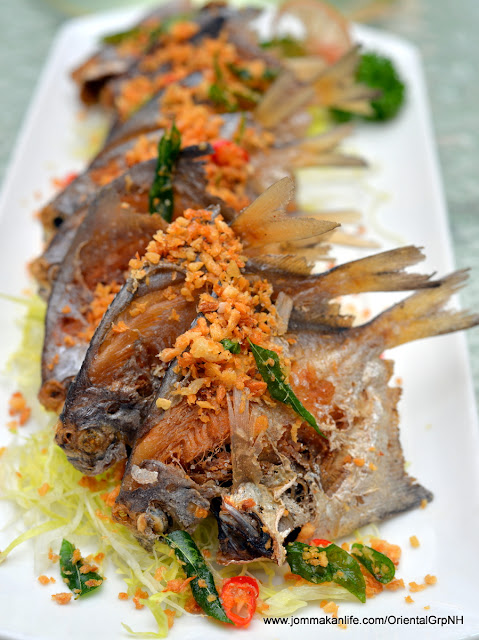 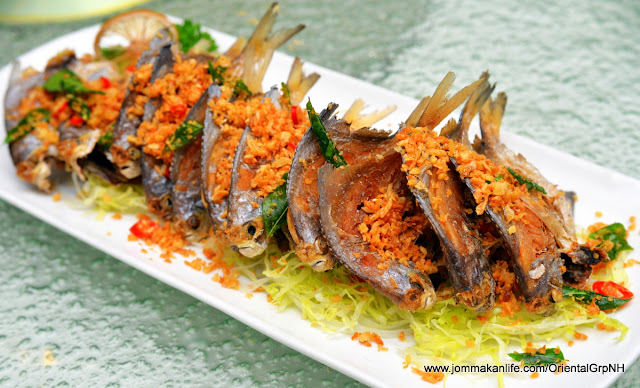 A surefire crown-pleaser thanks to the invigorating strong flavours evoked by the scattering of crisp-fried curry leaves, minced garlic and hot bird's eye chilli. Kudos to the chef for daring to wade into unfamiliar waters, using the little fishes which left us hooked on their smoky crispiness and sweet flesh. 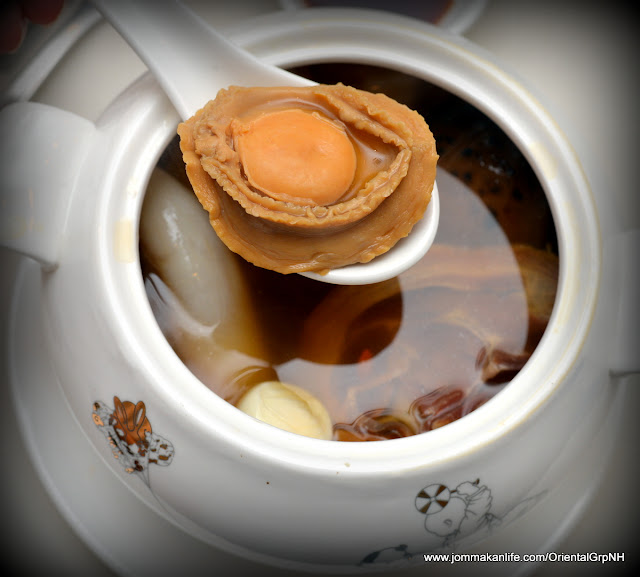 Then we were all souped up by the Imperial Rejuvenation Soup. According to Chef Justin, this speciality recipe came from his 'sifu' (mentor) and is similar to a traditional Buddha Jumps Over The Wall. Updated to fit modern cognoscenti, the double-boiling process took up to 6 hours and that lengthy period haven't covered the initial, painstakingly preparation of the various dried seafood items yet. 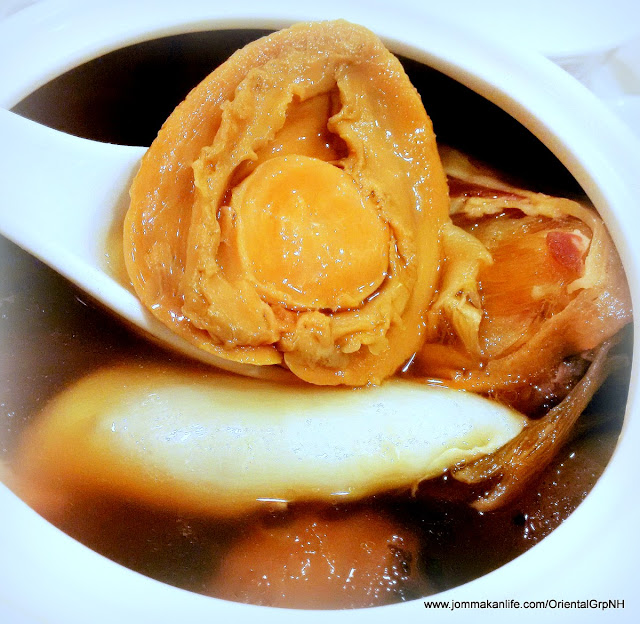 We dug in and uncovered a 4-head abalone, superior shark's fin, fresh fish maw, sea cucumber, Japanese dried scallop and conch in addition to plump Japanese mushroom, Yunnan ham, pork tendon, a hardboiled quail's egg and Chinese herbs like ginseng, 'huai san', superior 'tong sum' and wolfberries. With such choice ingredients in one specially designed receptacle, the sumptuous soup will boost your vigour for sure. 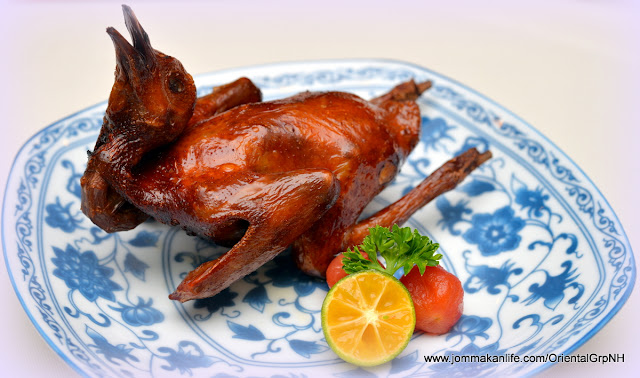 Next in the pecking order was Roast Baby Hong Kong Pigeon. Delicately suffused with the complex nuances of 'lou sui' (braising stock) and aromatic spices, the crackly crisp skin gave way to moist, tender meat. Every serving also came with half a kaffir lime and cherry tomatoes soaked in preserved plum juice.The kaffir lime was meant to moisten the drier breast meat and temper its mild gaminess while the cherry tomatoes helped to cleanse the palate from residual greasiness. 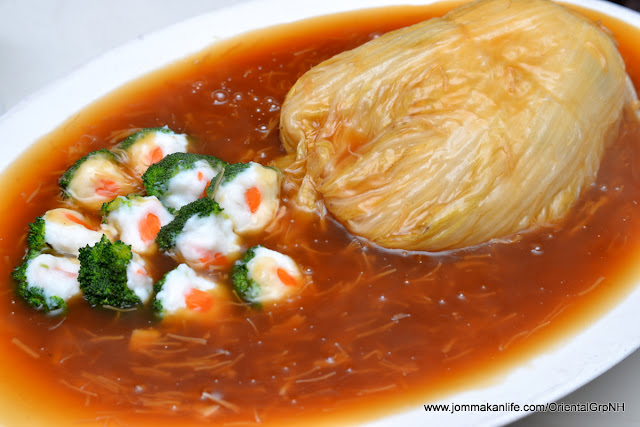 Those of you who are old enough like yours truly will remember the Traditional Stuffed Whole Chinese Cabbage once ruled supreme in Chinese banquets of yore. The Chinese has always held this vegetable in high regard as 'pau choi' in the native language means guaranteed prosperity. 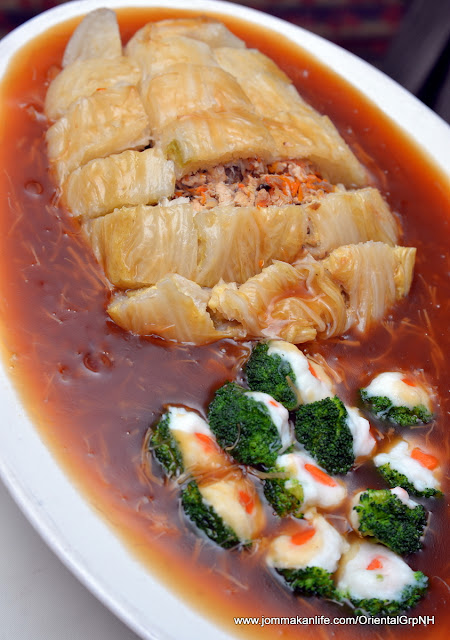 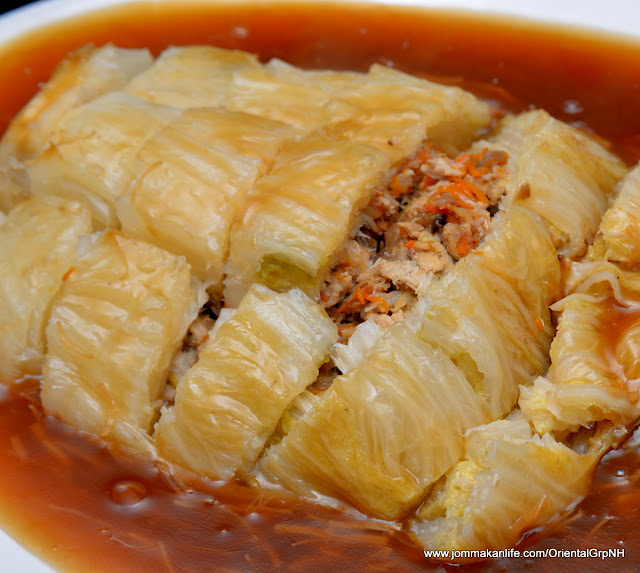 Now you can appreciate this retro masterpiece in which the whole cabbage held an enticing stuffing of minced pork, crab meat, diced mushroom, carrot and waterchestnuts at its heart.The yummy offering was accompanied by florets of broccoli enrobed with fish paste and immersed in an unctuously rich dried scallop sauce. Heavenly. 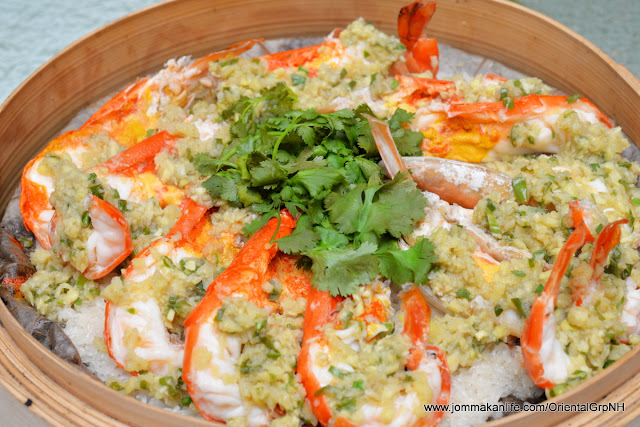 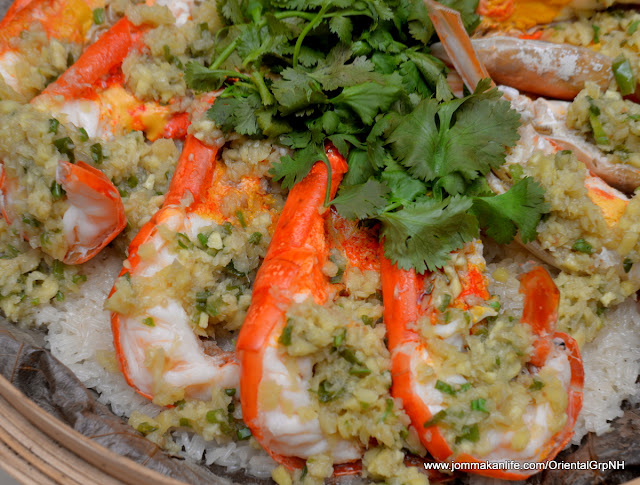 The culinary wizardry continued with the droolworthy sight and smell of Steamed Fresh Water Prawns on Glutinous Rice. Tucked inside a huge bamboo steamer basket was sizeable fresh river prawn halves, generously smothered with minced ginger and chopped fresh coriander plus spring onion. These springy textured crustaceans reclined on a bed of fluffy glutinous rice; the sticky grains capturing all the sublimely sweet prawn jus for our enjoyment. 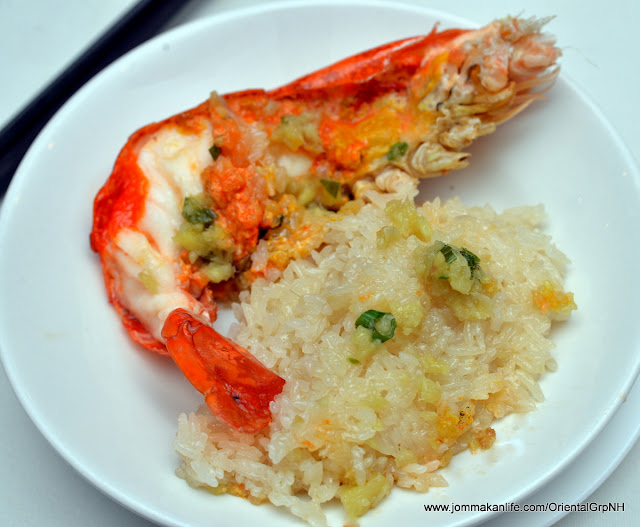 What little tummy space remained was amply filled by Sweetened Red Bean Broth with Old Guangzhou Orange Peel. It was fascinating to learn from Chef Justin the aged citrus peel he procured from Guangzhou cost a bomb. Compared to the regular homemade dried mandarin peel which imparted a stronger overtone, this one infused the 'tong shui' with its pleasantly mellow citrusy scent and nuance. 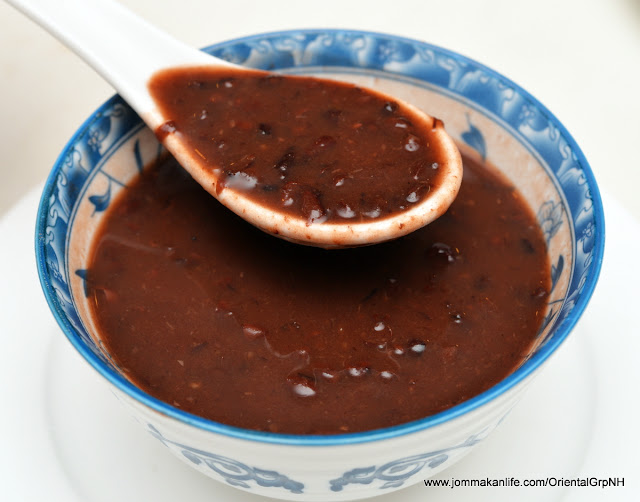 Plenty of 'oohs' and 'aahs' over the skillful handiwork that went into making the White Lotus Peonies & Crystal Pumpkin Dumplings. I prefer the latter for the dumpling's slightly chewy skin - stained a bright orange - contained subtly sweet mash that contrasted well with the flaky, light floral-shaped dumplings brimming with white lotus paste. 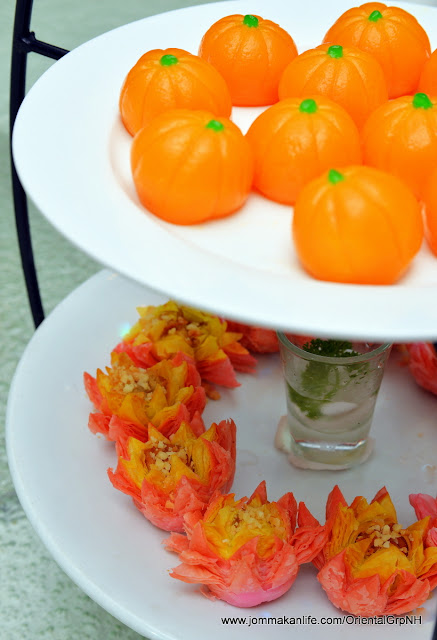 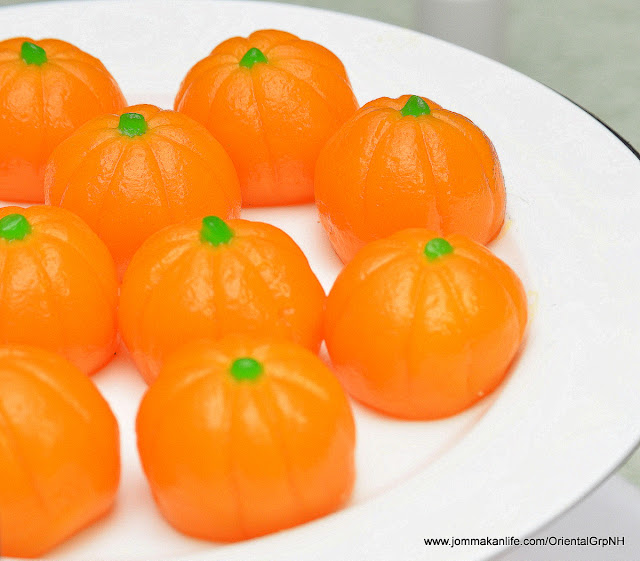 For more information and advance reservations, please call Noble House, tel: 03-2145 8822 or check www.orientalrestaurants.com.my for the full listing of The Oriental Group of restaurants.
at September 14, 2016

All those delicately dishes are make me drooling..... >_<

@Choi Yen - TQ for reading my posts. The dishes by Chef Justin were worth drooling over! :)