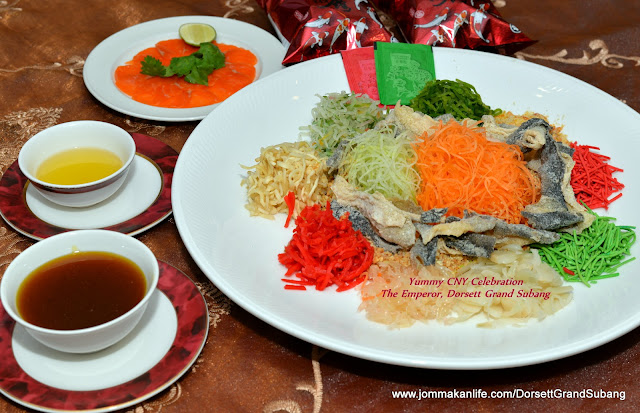 Oishi is the word that comes to our lips as we savour the multi-colour Japanese Style Prosperity Yee Sang with Crispy Fish Skin & Salmon (RM98++ half portion, RM138++ full portion) at The Emperor restaurant. 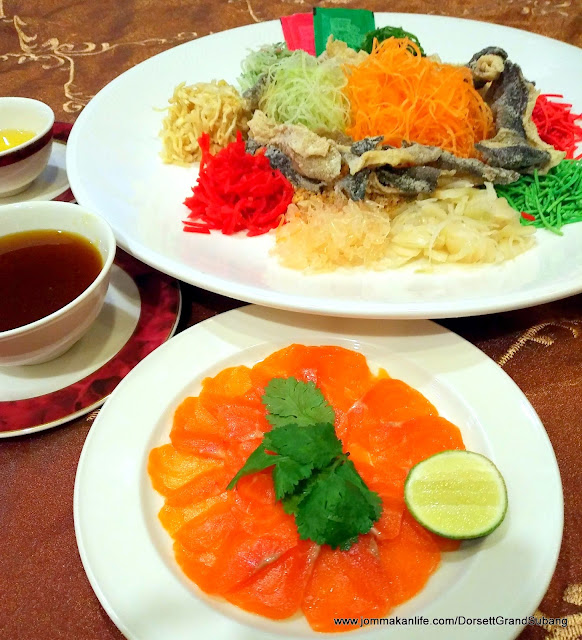 Available with a choice of traditional plum sauce or Japanese wasabi sauce, this celebratory salad platter is the tip of the CNY culinary parade rustled up by Executive Chinese Chef Bryan Teh and his team.
Having won three Gold Medals: from Shanghai International Top Chefs Invitational Competition, the 2019 Malaysia World Elite Chefs Championship and the 2019 Asian Culinary Exchange competition in Japan, in addition to a Silver Medal from the 2019 World Master Chefs Competition for Cantonese Cuisine held in Macao, the jovial chef and his team are ready to cook up a storm of old and new dishes for Chinese New Year. 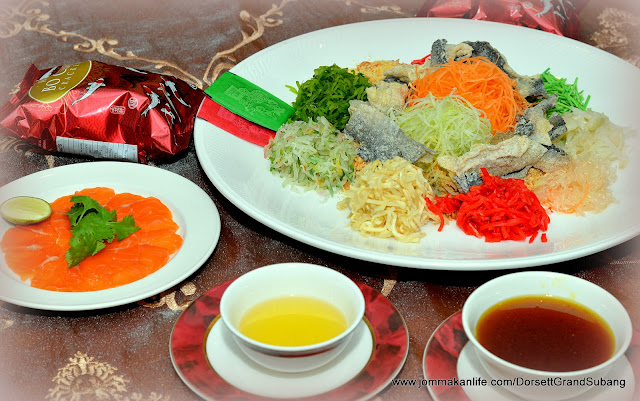 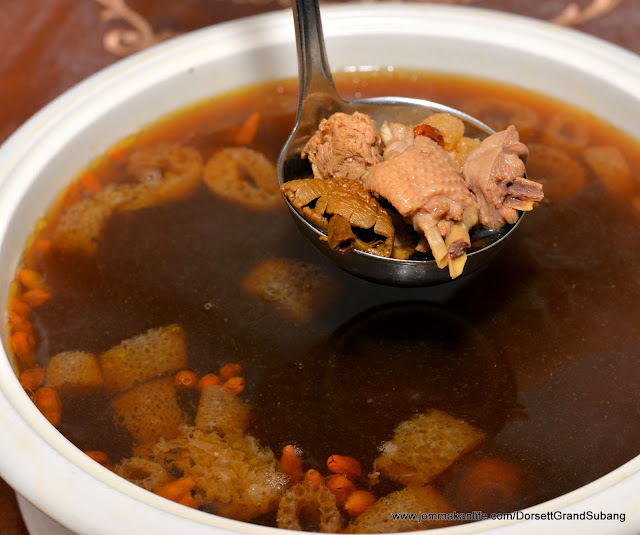 The festive specialities in the Wealthy Set Menu are proof why The Emperor still rules as a favoured haunt for dining like kings among the corporate crowd and Subang residents. Especially after they slurp up a salubrious bowl of Double Boiled Matsutake Mushroom with Bamboo Pith and Farm Village Chicken. 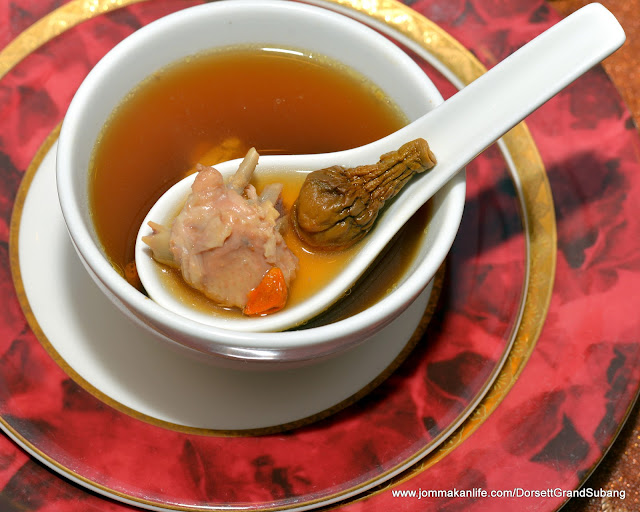 Every spoonful of the nutritious, wholesome broth is more enjoyable and beneficial than popping supplements. Palate-pleasing textures emerge when you nibble on the earthy matsutake mushroom; a subtle contrast to the soft, spongy bamboo pith and chunks of fall-off-the-bone chicken. 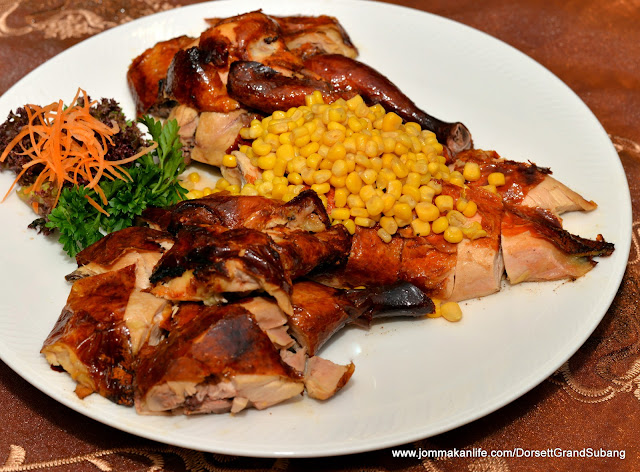 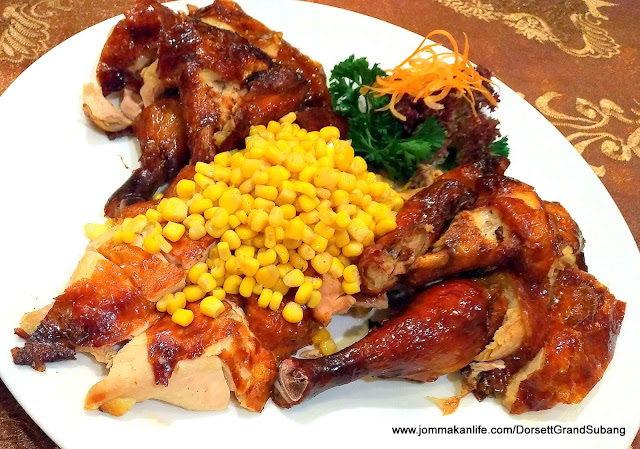 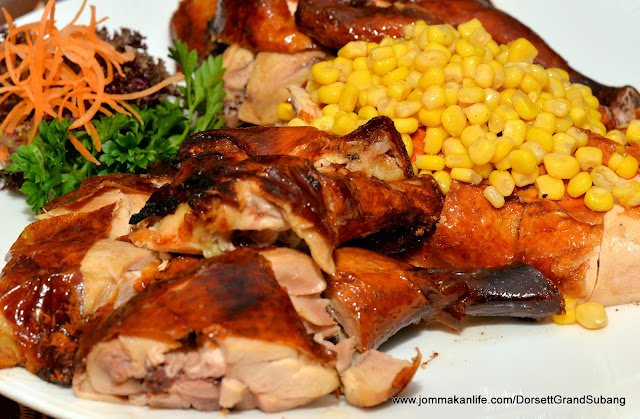 Crispy skin- checked. Juicy meat – checked. The pile of buttery sweet corn niblets bursting with delicate sweetness, transforms the dish into something to crow about. 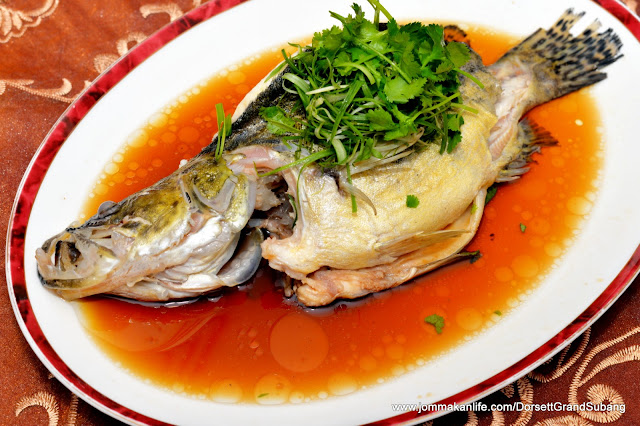 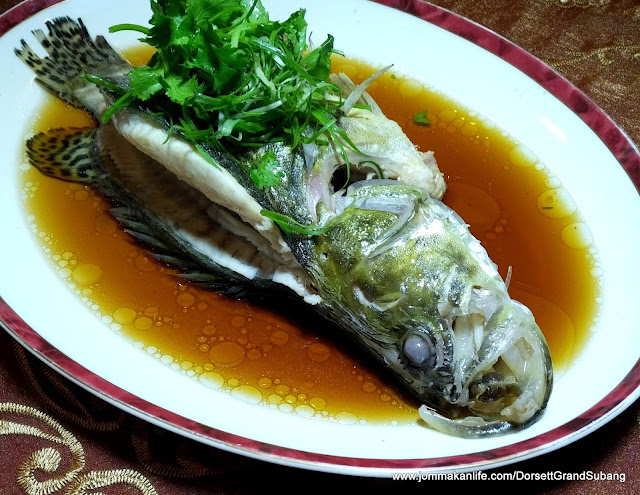 It’s wise of the chef to go with the usual flow when it comes to the perennial fish dish on such a significant occasion. Thanks to his own saucy concoction using superior soya sauce from Lee Kum Kee, the noteworthy Hong Kong Style Steamed Mandarin Fish with Superior Soya Sauce makes quite a splash with us. We appreciate the fish’s natural sweetness remains discernible, complemented by the aromatic soya sauce. 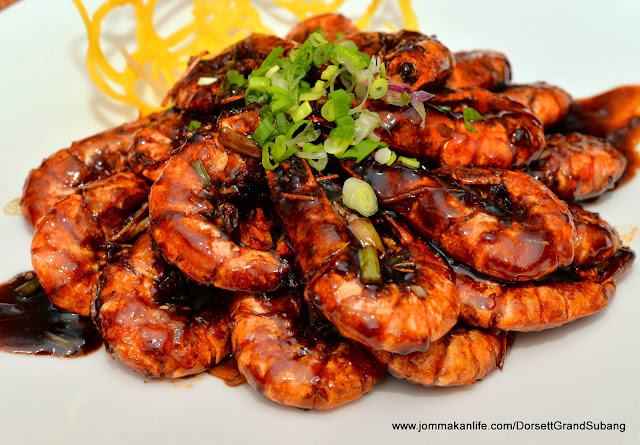 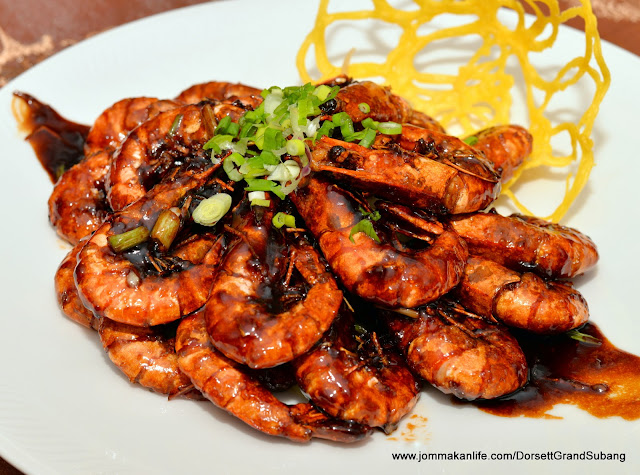 More soya sauce wizardry is apparent from the scrumptious Wok-Fried Tiger Prawns with Superior Soya Sauce. Slicked like shellac, the dark savoury glaze enveloping each crustacean entices us into much finger-licking and shell-sucking before the prawns are duly devoured. 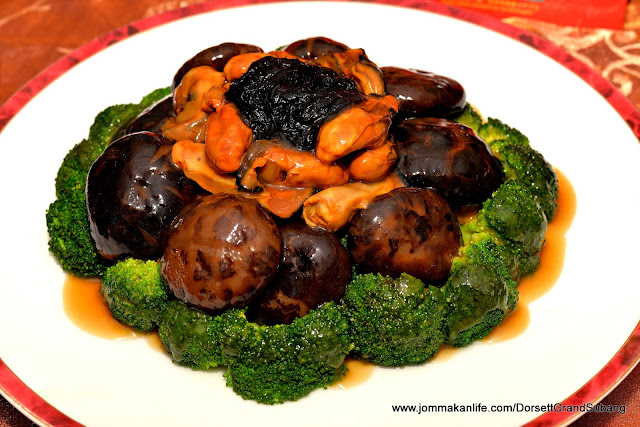 Good things not only come to those who wait but also to diners who savour the auspicious-sounding dish of Braised Black Mushroom with Dried Oysters & Sea Moss. Plump and succulent, the black mushrooms paired with smoky dried oysters and fine hair-like seamoss are always eaten with gusto throughout the festivities – as hou si, fatt choi denotes the ushering in of good things and prosperity. 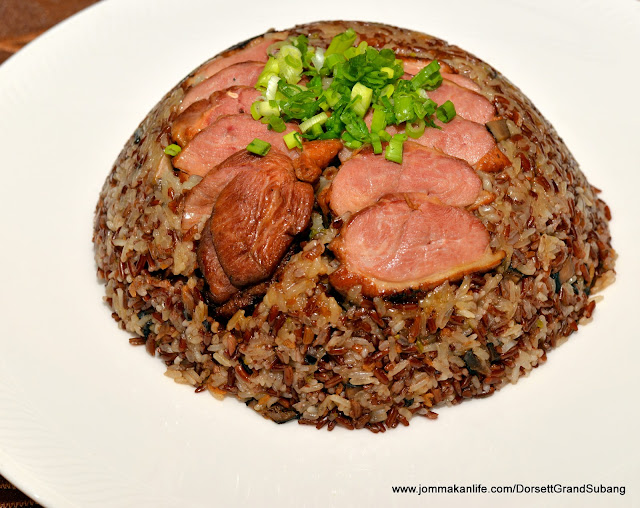 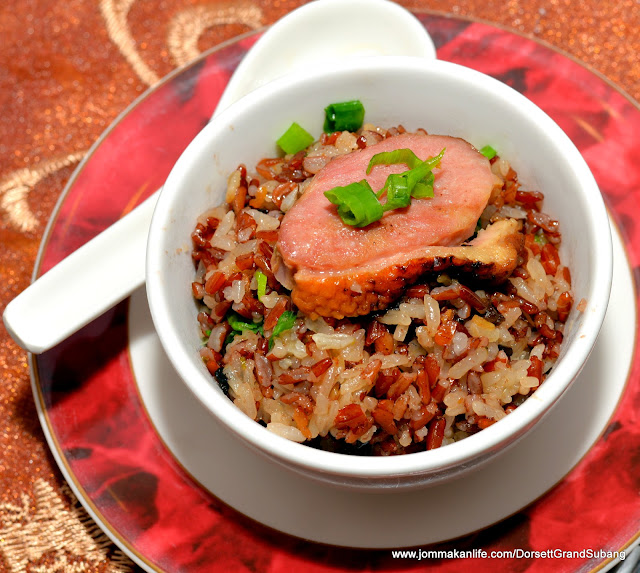 Instead of waxed meat rice, modernity and growing health-consciousness prompted the creation of new, almost guilt-free Steamed Organic Brown Rice with Glutinous Rice & Smoked Duck. A most mouth-watering speciality with a healthy spin yet suitably tasty for festive feasting. 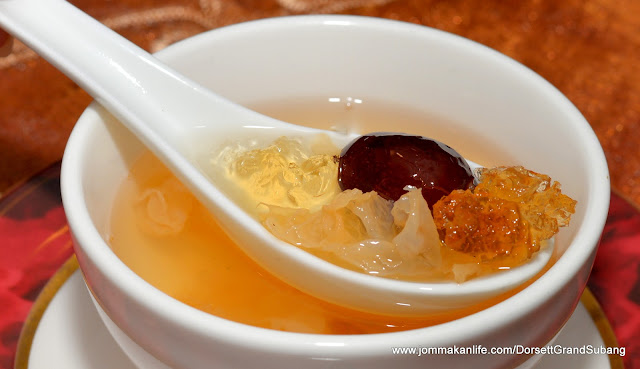 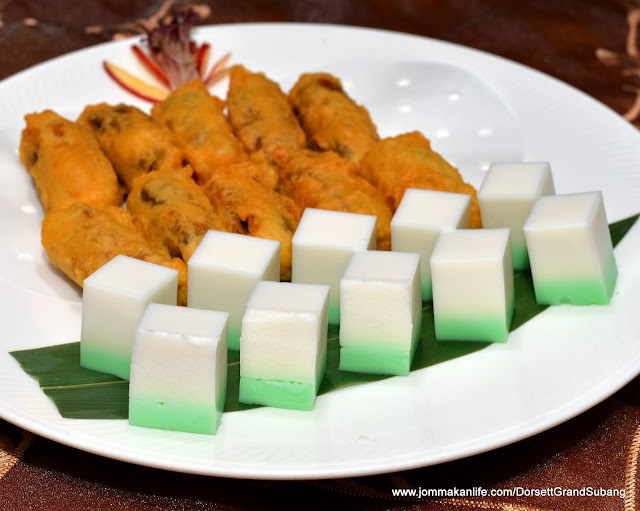 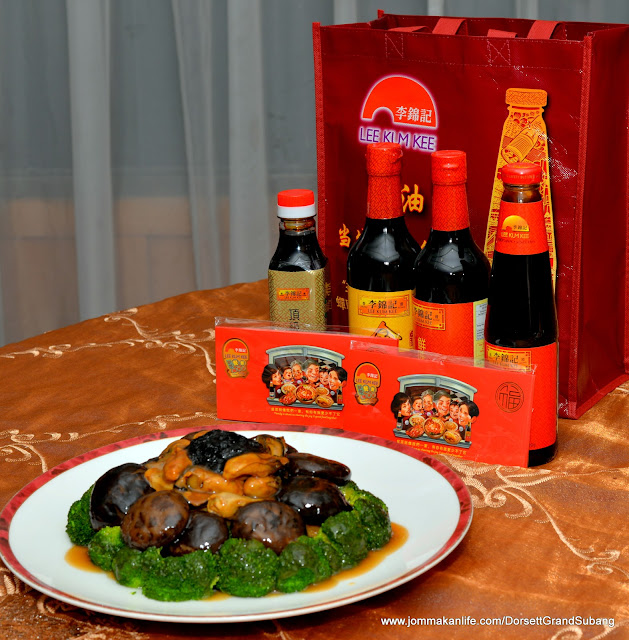 Receive a Lee Kum Kee goody bag (while stocks last) when you reserve a table on the eve of and first day of Chinese New Year at The Emperor. Should you decide to partake the Wealthy Set Menu, you stand to win a special Gift Box courtesy of Lee Kum Kee (limited to 2 sets daily).
Advance reservations is compulsory from the eve of Chinese New Year until 8 February 2020. Call The Emperor, tel: 03-5031 6060 or email: bookfnb.subang@dorsetthotels.com or visit www.dorsetthotels.com/malaysia/subang