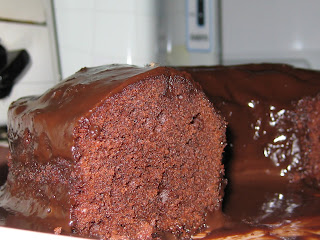 After the earlier success of my chocolate muffins, I was inspired to give the trusty pound cake recipe another go. Although the recipe calls for a 6 inch can pan, I used an 8 inch ring pan instead coz that is what I have on hand. The rest were 2 inches too big so I really don't want to risk the cake 'stretching' unnecessarily.

Since the temperature stated is 375 degrees Fahrenheit, I set my oven to 190 degrees Celsius. Also I added 3 tablespoons of milk to the recipe as I read somewhere that cocoa tends to dry out the cake texture during baking. After the cake had been baking for a while, I noticed the top was cracked. This indicated the oven was too hot or it could be due to my own foolhardiness in using that ring pan!

Anyway all's well that ends well. After 45 minutes I realised the cake had shrunk away from the pan edges a little so I quickly removed it from the oven. Luckily no further damage was evident. Phew! 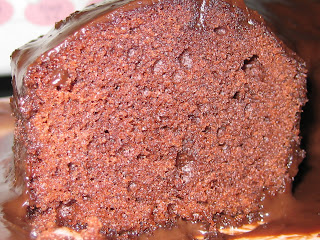 Here's a close-up of the end result. Doesn't look too bad does it? Tastes great too I must say. It was a tad dry when it was still warm but after 1-2 days, the texture actually became more moist. To cover up the unsightly cracks, I decided to slather the cake with some chocolate frosting. 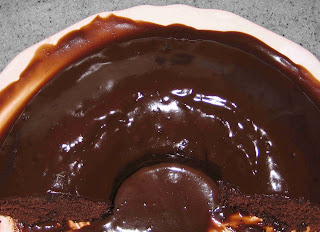 I used 200 ml whipping cream mixed with half a large bar of cooking chocolate and a small pat of butter for the frosting. Can you believe it was my first time making this? I got really worried when the mixture looked too runny when I poured it onto the cake - I guess I should have let it cool down first before even thinking of using it! Nevertheless, nobody complained about the taste so I reckon it was fine. Once overnight, the cake appearance looked much, much better as the frosting has taken on a nice sheen. 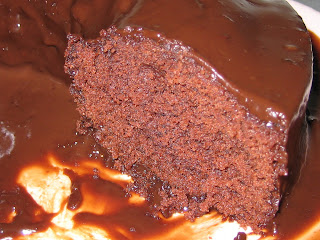