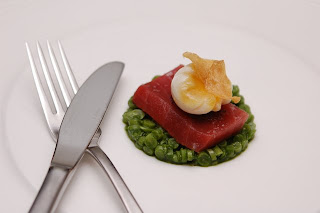 Despite these trying times, there is a segment of Malaysians who are recession-proof and don't mind paying for a fine and memorable meal. Especially if it's cheaper than flying to London and dining at a Michelin-starred restaurant like Chez Bruce or a swanky restaurant like Mirabelle or putting on the ritz at the Ritz.

High flyers can now high-tail it to Chinoz KLCC and let new chef de cuisine Haffizul Hashim blow them away with his inimitable culinary prowess. Having spent several years in good ol' Blighty namely London, this Bachelor of Culinary Arts degree holder from Thames Valley University had his baptism of fire at the Ritz. The resilient lad then honed his skills at the Mirabelle and later, at Chez Bruce before his return to hometurf late last year.

Thanks to his former bosses' glowing account, the young chef soon found himself helming the Chinoz team. Full creative licence and new kitchen gadgets were quickly granted by owner Teng Wee Jeh. Chef Haffizul of course repaid the faith by revamping the outlet’s a la carte and Degustation menus.

His imaginative starter of Carpaccio of Blue Fin Tuna with Green Beans Salad and Poached Quail Egg with Basil and Parsley Vinaigrette (RM42++) will leave you hot and cold. It's a special dish in which three varying temperatures – hot, warm and cold converged on one plate with each ingredient’s fresh, unadulterated nuances coming to the fore on their own instead of melding together. 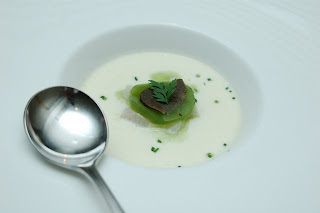 I'm a sucker for scallops and the chef's creation of plump Hokkaido Scallop with Cauliflower Velouté and Cucumber Jelly and Chives (RM42++) is simply awesome. The scallop’s inherent sea-sweetness is unmistakable thanks to the velvety smooth velouté (a basic white sauce thickened with roux, a mixture of butter and flour). The sharp, clean nuances of chopped chives and cucumber jelly provide the perfect finishing touches to this sumptuous dish. 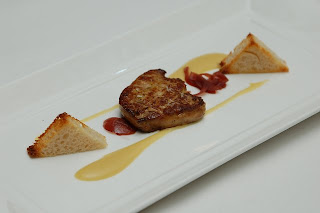 Tiny flecks of natural sea salt were all that's needed to bring out the rich, decadent smoothness of the Pan-fried Foie Gras. Paired with Sweet Corn Puree and Toasted Sour Dough, this is another heavenly speciality which earned praises around our table that night. 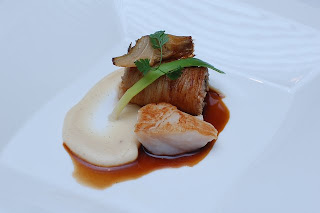 If you think fish and red wine seem like strange bedfellows, the combination of Roast Potato Wrapped Barramundi with Seared Hokkaido Scallop, Parsnip Puree and Red Wine Jus (RM68++) with ‘Tenimenti’ Barbaresco Coste Rubin 2000 is guaranteed to change your mind. Chef Haffizul said the secret lies in the parsnip's subtle flinty sweetness in drawing all the other ingredients together. 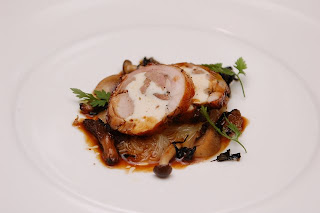 The Italian red’s sour cherries and plummy accents proved equally apt with the Chicken Ballotine with Veal Sweetbread and Sautéed Wild Mushrooms, Potato and Truffle Emulsion, Madeira Sauce. Now sweetbread (calf’s thymus gland) is not something ordinarily most local diners will devour but I admit it's difficult to discern the uncharacteristic ingredient since it's well tucked away in the chicken ballotine (deboned chicken stuffed, rolled and tied into a bundle before being braised or roasted). The deliciously full-bodied sauce of cepes mushrooms, truffles and Madeira also helps tremendously. 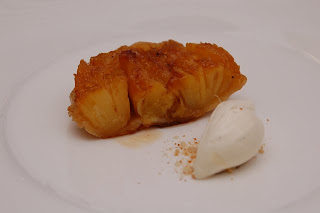 For his final flourish, Chef Haffizul serves up Pineapple Tarte Tatin and Vanilla Ice Cream. I just love the sweet intensity of the pineapple chunks post-baking so who cares if they appear less refined on the eye?

You can sample all these exquisite dishes from Chinoz's latest a la carte or as a Degustation menu priced around RM230-RM250++ per head. I for one is rooting for this young and talented chef - his fresh perspective is definitely something the local culinary circle should be excited about. Malaysia Boleh!

You really know how to write about food. Only reading and LOOKING makes one salivate :)

You really know your food. Reading and LOOKING at your blog makes one hungry and salivating. Keep up the great food blogging Alice!

I hope you keep on reading my foodie exploits too...it was great meeting up with you and your family recently. We had a fantastic time and hope that you did too. Thanks again for hosting us to such a lovely dinner at home!