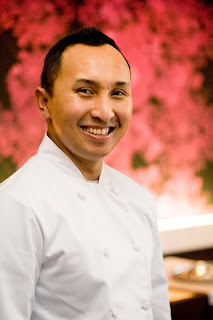 Norman Musa shot into the limelight when he became the team chef for Malaysian-owned Lotus Racing Formula One team earlier this year.

I managed to catch up with the youthful chef and interviewed him when he was in town recently thanks to Sidney Kan of Big Boys Oven. Norman's whirlwind visit to KL and Singapore was also to promote his self-published cookbook titled Malaysian Food; the Butterworth boy conducted several live cooking demos in the city's major bookstores to give readers a sampling of what's in his maiden publication. 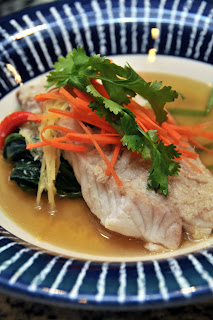 One of the dishes prepared by Norman - Steamed Fish with Ginger
As the co-owner and head chef of Ning, a thriving Malaysian restaurant in Manchester, UK, Norman's self-taught culinary skills have won him plaudits from British food lovers as well as fellow Malaysians who are either residing or visiting there.

Read all about Norman's culinary success and aspiration to be Malaysia's next food ambassador in the following article published in the Star: