Since I'm not residing in Subang Jaya, I find it's fascinating that the suburb should have so many Japanese restaurants tucked within the vicinity that stretches between SS12 and SS15.

We dined at two recently and both serve better than average Japanese fare much to our delight. In fact, this review is on Yamada - a small eatery that obviously is named its owner-chef who looks like he's got a wealth of experience behind him.

The blond wood-clad interior was tastefully decorated with lovely Japanese paintings and outfitted with a long sushi bar. 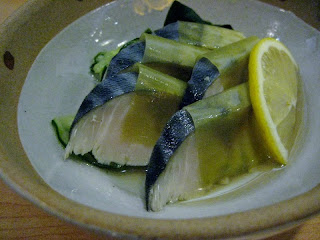 Feeling adventurous, hubby and I decided to bypass the set dinner menu and ordered some distinctly Japanese dishes for sampling. As luck would have it, our choices turned out to be really good too!

Hubby's first pick of Vinegared Mackerel was a tantalising curtain-raiser; slices of super-fresh and firm mackerel wrapped in a translucent layer of pickled leek. The fish's inherent richness was aptly tempered by a lip-puckering but pleasant vinegary tartness whilst raggedy strips of wakame (kelp) and paper-thin slices of cucumber lent their textural contrasts. 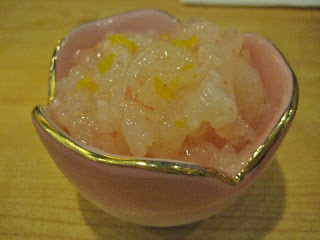 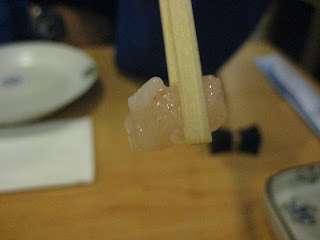 His next choice of Sweet Shrimps were equally sublime. Served sashimi-style, the tiny pink shrimps were sugary sweet and springy to the bite with unexpected bursts of citrusy nuance and fragrance coming from the fine yuzu zest that was sprinkled on top. We also found tiny pearls of glutinous rice amongst them and wondered if this had contributed to the delicate sweetness. 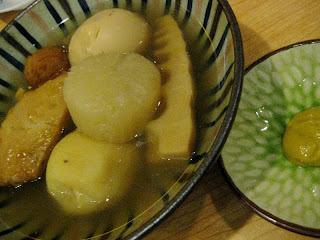 I couldn't recall when I became enamoured with Oden but I've always kept an eye out for this speciality whenever I dine out at any Japanese eatery. Similar to our local yong tau foo, Yamada's version comprises a piece of thickly sliced radish, a wedge of bamboo shoot, a triangular slab of ita konnyaku, a bouncy fish ball, a fried fish cake patty, a whole boiled potato and a hard-boiled egg. We found the different offerings acquired a tantalising zing when eaten with some Japanese horseradish. The only snag here was the overly salty broth which took some getting used to. 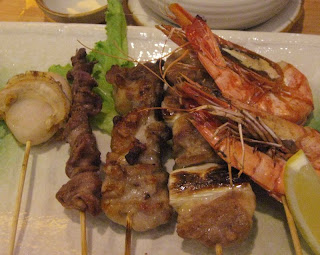 Our order of Kushiyaki was top-notch. I went for 5 sticks: a whole scallop, chicken gizzard, boneless chicken drumstick meat, chicken meat with inch-long scallion pieces and prawns. Grilled with a sprinkling of shio (salt) and enhanced with a squeeze of lemon juice, we thoroughly relished each skewer for its splendid texture and natural flavour. 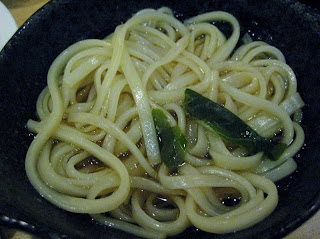 Ever since our favourite Japanese restaurant in the heart of KL closed down some years ago, hubby has been yearning for good Inaniwa Noodles. Past encounters have yet to come up to scratch and this time, it was no different. These fine wheat noodles which are akin to mee suah boast a fine, smooth texture and is served plain in a delicately flavoured broth. While the bowlful we sampled at Yamada was not too bad, it wasn't something to write home about either.

Still, we'd probably return to Yamada as the menu has scores of other intriguing dishes that we'd like to try. The restaurant was packed with Japanese expats and some locals the evening we went; in fact we were lucky to get a table since we happened to be the early birds!