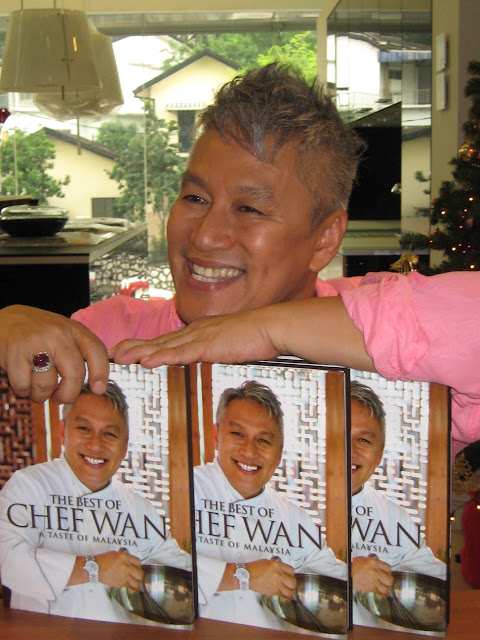 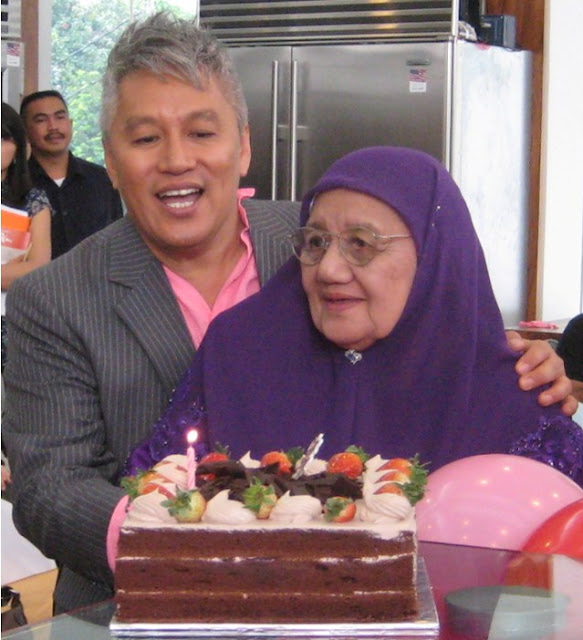 Held at Kitchen Culture, Bangsaria, the book launch was a cosy affair with his family and friends showing up in full force in addition to the local media to support him. 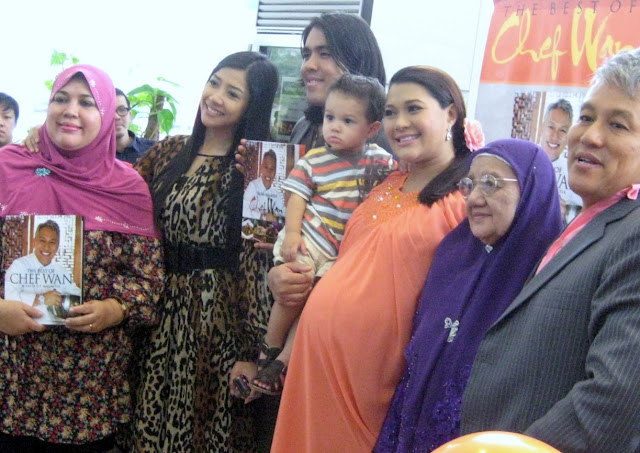 Ever obliging, outspoken and talking nineteen to the dozen, Chef Wan was a laugh a minute; his candour remarks and rapid-fire chatter kept everyone in stitches with an occasional gasp and mock horror thrown into the mix. 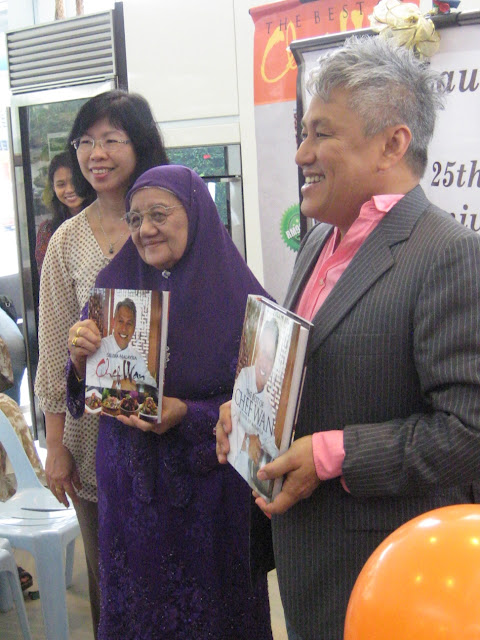 The affable chef paid special tribute to his sprightly mother, labelling the real 'chef one' while he himself is chef number two. Recalling the days when he helped out by selling kuihs, Chef Wan affirms that his mentor and inspiration would always be his dearest mother.

"Cooking is about sharing, respecting nature and connecting with people," says Malaysia's food ambassador. "These past 25 years have a struggle but I still enjoy cooking; it's a great way to entertain people and impart our history, culture and food knowledge to others." 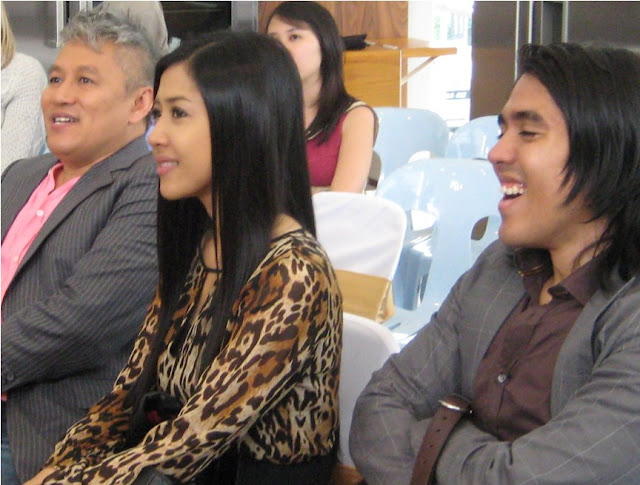 Chef Wan with his daughter-in-law and son, Riz 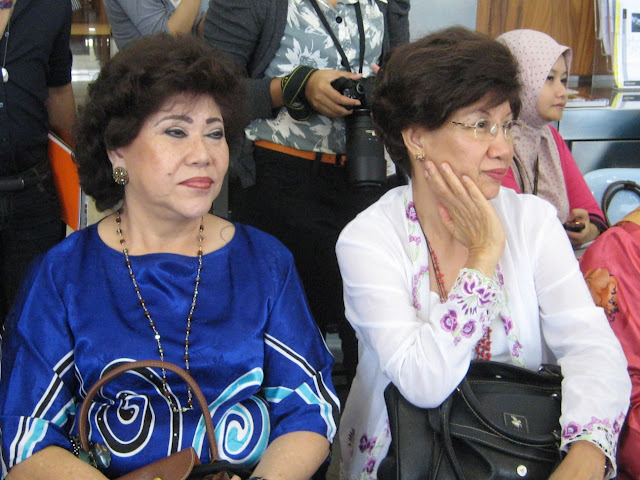 After a quarter century in the business, the busy bee still has bigger fish to fry. Besides working on his food encyclopedia project to document and preserve the country's Malay food heritage, plans are afoot to make Chef Wan Asian Culinary Academy a reality.

"The school will be devoted to teach not only Malaysian but also Asian cuisine such as Thai, Indonesian, etc. It's a shame that we don't have enough chefs who are skilled in our regional cuisine. My culinary academy aims to plug this gap and concentrate on offering Malay/Asian cooking courses. I want to place everything under one roof; initiate a diploma for South-east Asian culinary studies and hold interactive classes where people can learn how to cook basic or special dishes, keep young people occupied and maintain our culinary heritage. I also plan to help underprivileged kids who dream of becoming chefs via the Chef Wan Foundation." 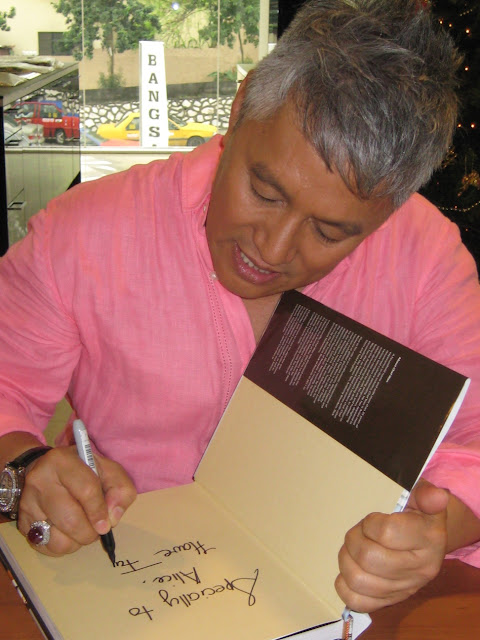 The food ambassador believes that we need to maintain and protect our food culture and heritage.

"Food's the only thing that binds people together.We have to be proud of our food as it gives us a sense of belonging. If there's something that I can change, I'd form a Ministry of Food," said Chef Wan. "We need to get our food right, a body to educate our people to cook quality food. It's sad we're letting foreign workers butcher our food and have tourists eating badly cooked local food at filthy eateries that use cheap ingredients. We must get back on the right track.

"That's why some feel offended when I speak out. They can't take my criticisms but I'm just doing my job by telling the truth. When you're honest, you have nothing to fear."

Although he has appeared briefly in the AFC-E&O's Next Celebrity Chef show, Chef Wan is no fan of reality TV.

"People get so excited about reality TV shows but my advice is don't expect too much out of them. Most are overly dramatic and it can be demeaning to those participating. You can be harsh but not rude.I don't believe in putting people down and breaking their spirit. One must be hard, tough and strong in the kitchen so cut out all the crying and drama. There's no place in the kitchen for egoistic chefs."

He firmly believes that it takes more than good cooking skills to be a TV celebrity chef. "Experience counts as well as one's self-confidence, knowledge and effective communication skill - the ability to teach and explain things. 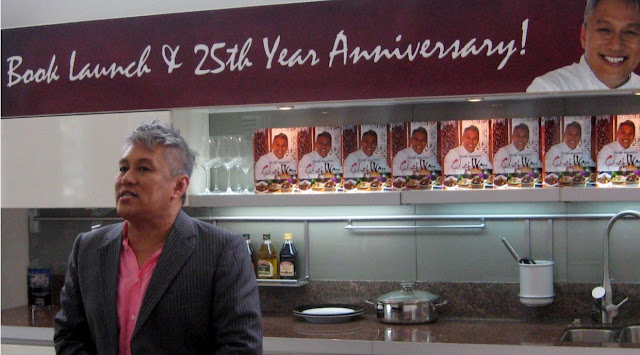 Having travelled the world and tasted countless dishes, Chef Wan declares that the best dish in the world is still his mother's nasi goreng with ikan bilis, sambal belacan and egg.

For youngsters who are starting out in life, Chef Wan reminds them that life is a challenge and filled with choices.

"Young people must have spirit - love yourself, your country, culture, etc. Never be afraid of making mistakes. That's why I told my son that he should apologise for padding up him resume. Take responsibility for it and move on."

The veteran chef who turned 54 in January this year said in parting: "In life, one must be compassionate. Have self-respect and love for humanity. People will remember the good things you do."