MASTER OF THE GAME 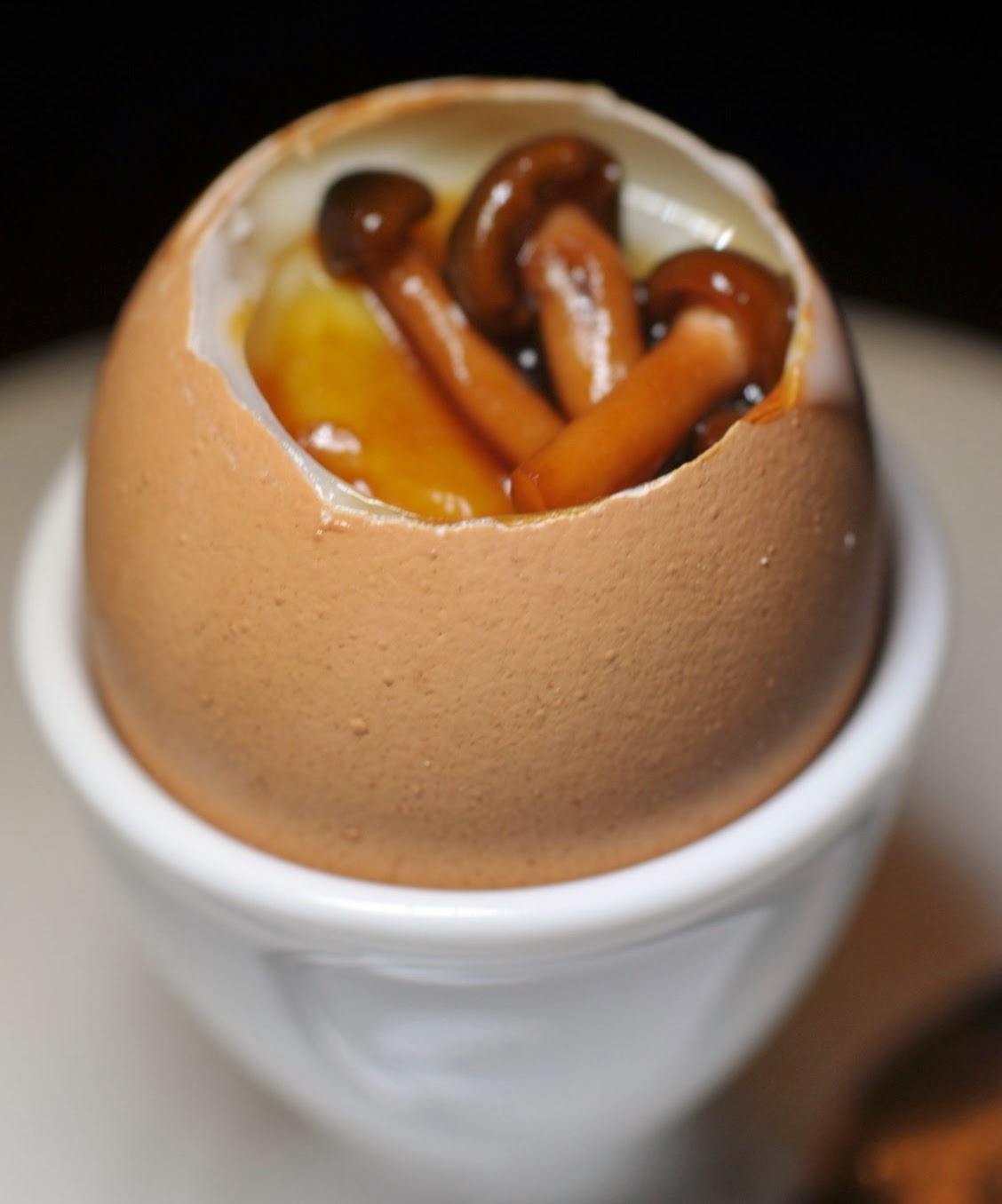 They say never trust a thin chef but make that an exception to the rule where Chef Roy Wong is concerned. Kim Ma is an understated magnet that draws discerning gourmands, the well-heeled and connected through its doors; most of them ardent fans of of the Executive Chinese Chef who prefers to let his Chinese cuisine artistry speaks for itself.

His exquisite amuse bouche of Half Boiled Egg with Japanese Mushroom pressed home the vital point with plenty of pomp. Softer than custard and seductively scented with the rusticity of dainty shimeiji mushrooms, this delicacy is something that you won't forget in a hurry. An ace up his sleeve to fete regulars and VIPs, Wong varies the topping; usually veering from foie gras, abalone or pearly roe depending on his choice and mood. 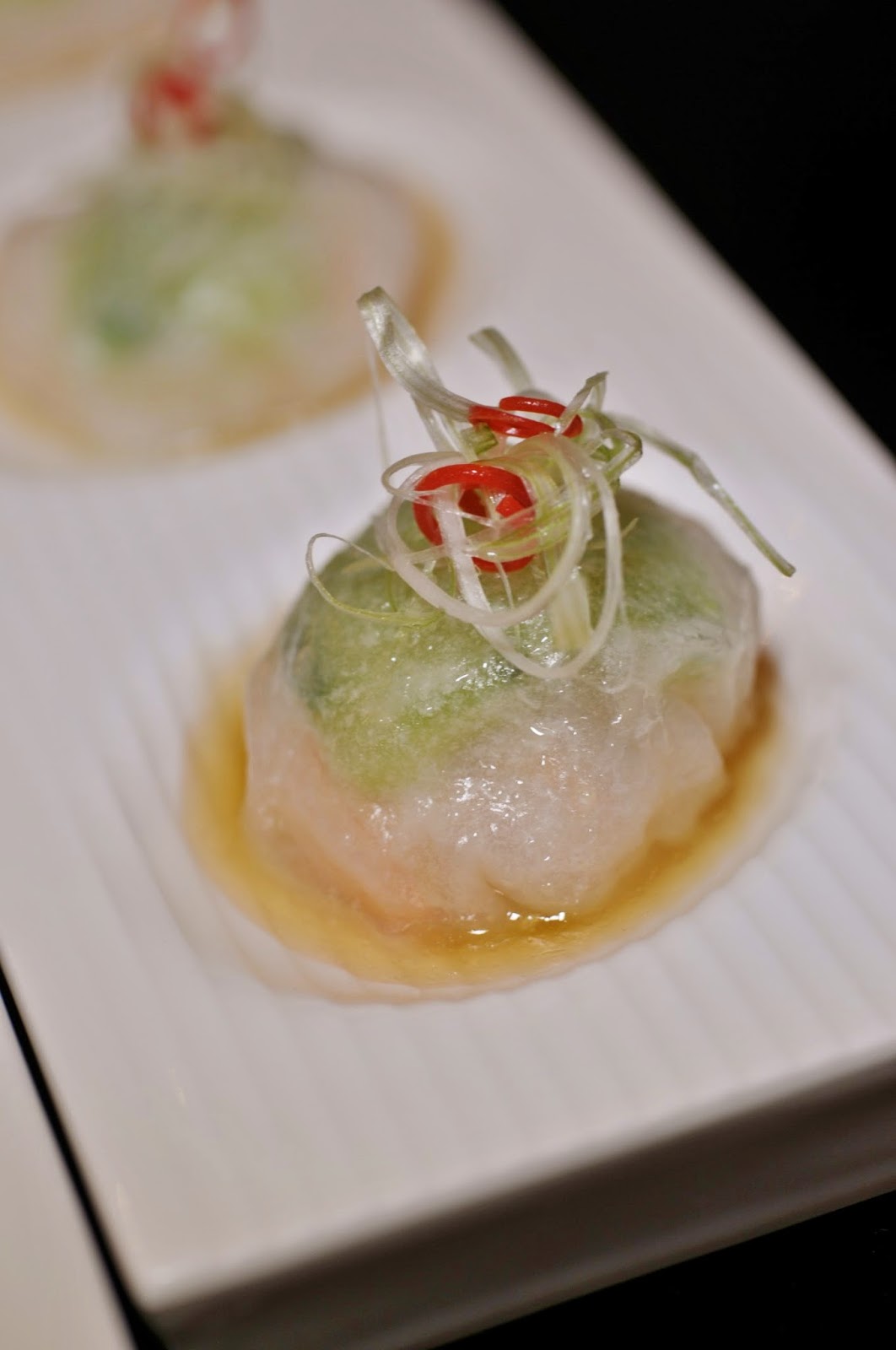 The restaurant's updated look where matte gold and silver hues merged with minimalist opulence sets the stage for Wong's judicious selection of Chinese specialities. Whether it's bite-size dim sum or fantastical Michelin-worthy dishes, a meal here belies the chef's passion and creative fervour.

Weight-watchers would love the angled loofah and minced prawn filling encased in a slightly chewy, translucent dough. The subtle flavours are further perked up by the superior broth that comes with it.
Textural contrasts and earthy accents are noticeably evident in the chicken roll which mixes chicken meat with chopped morel, deep-fried yam and carrot batonettes in a woodsy porcini mushroom sauce. 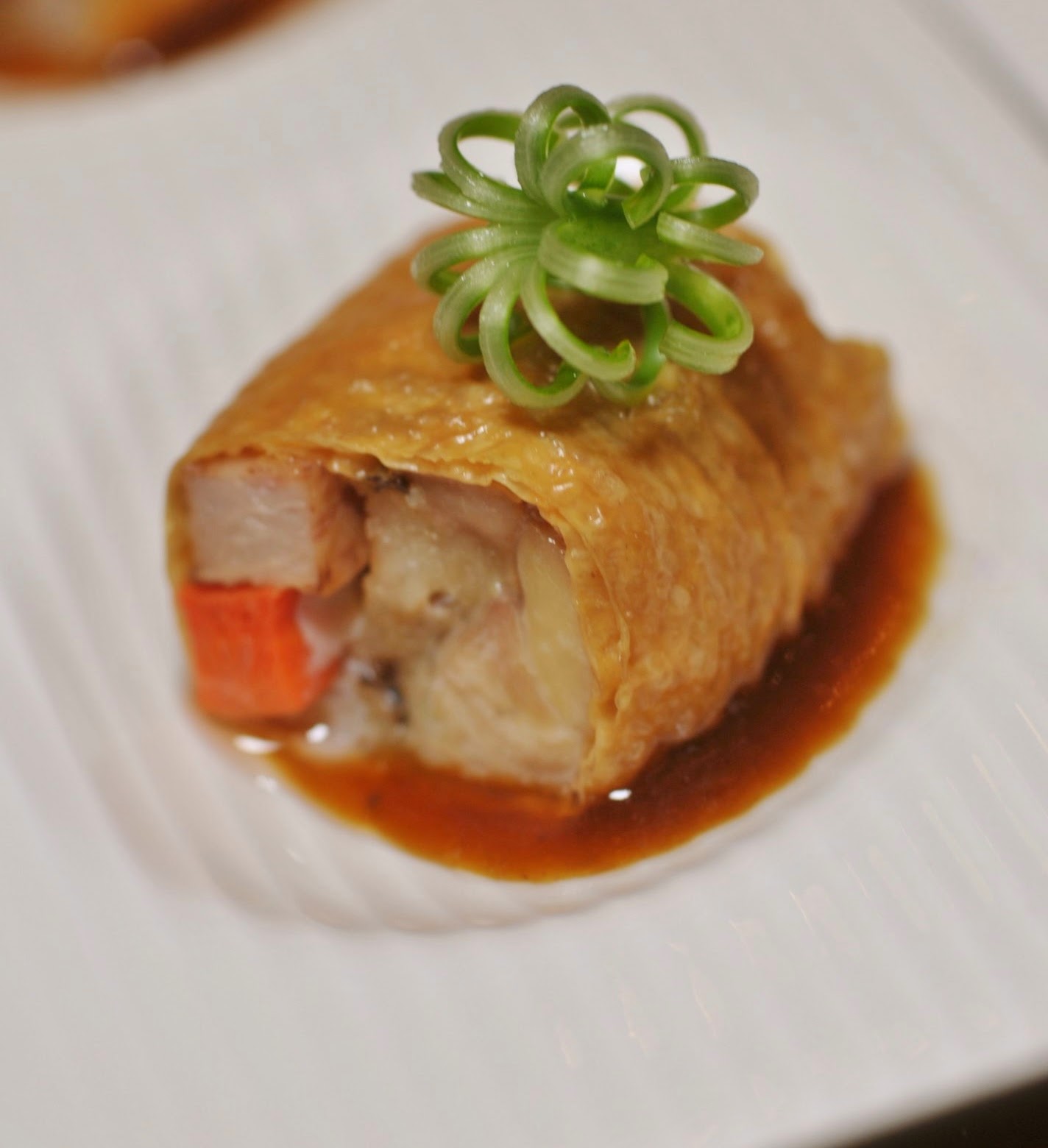 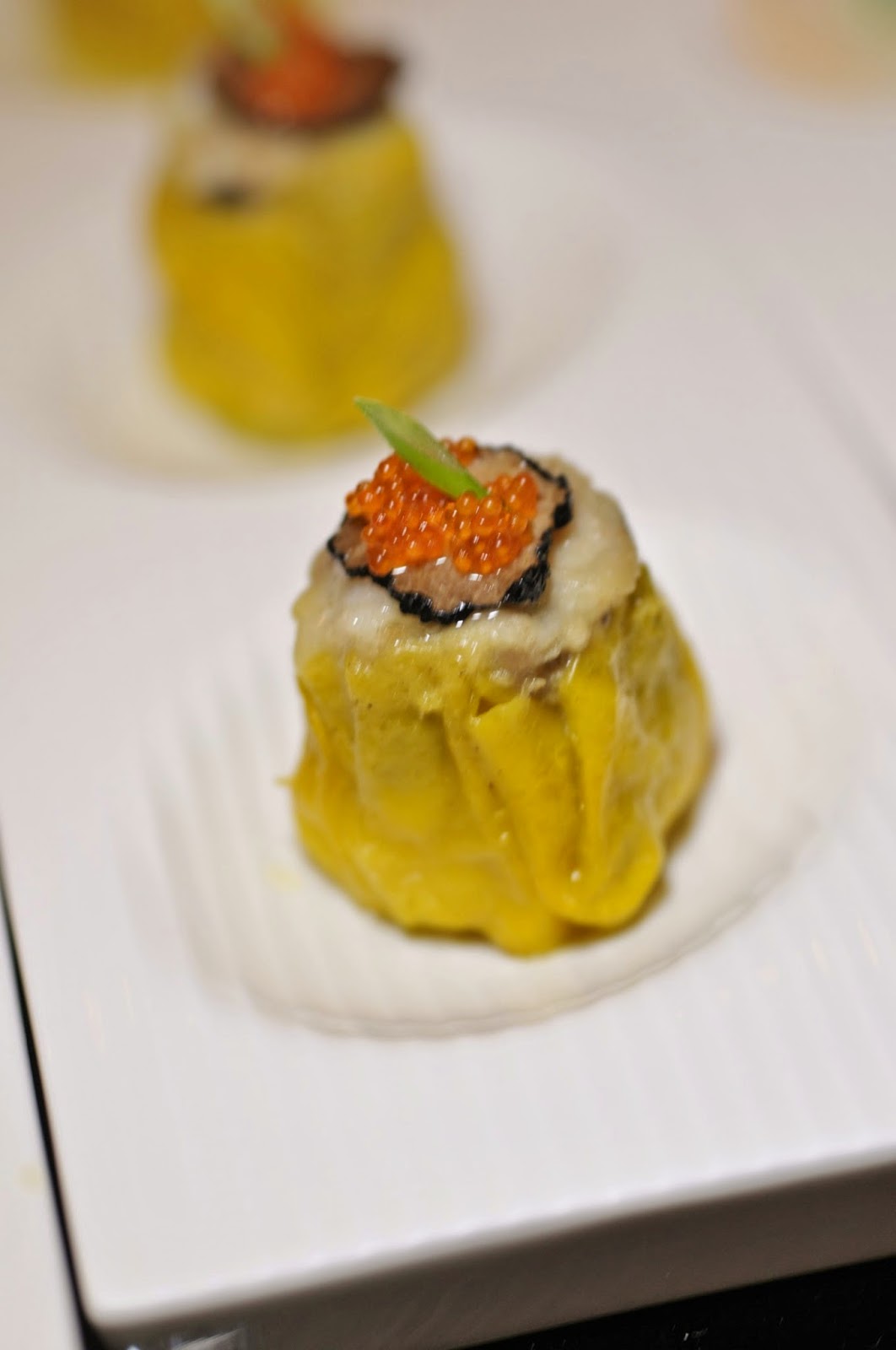 The prawn and black mushroom dumplings are springy to the bite, with added crunch bestowed by the garnishing of shrimp roe and spring onion while the sliver of truffle giving it a subtle musky aroma. Served a la carte for lunch on weekdays and brunch (10 am onwards) on weekends from RM10++ per item, the delicate morsels should go down a real treat. 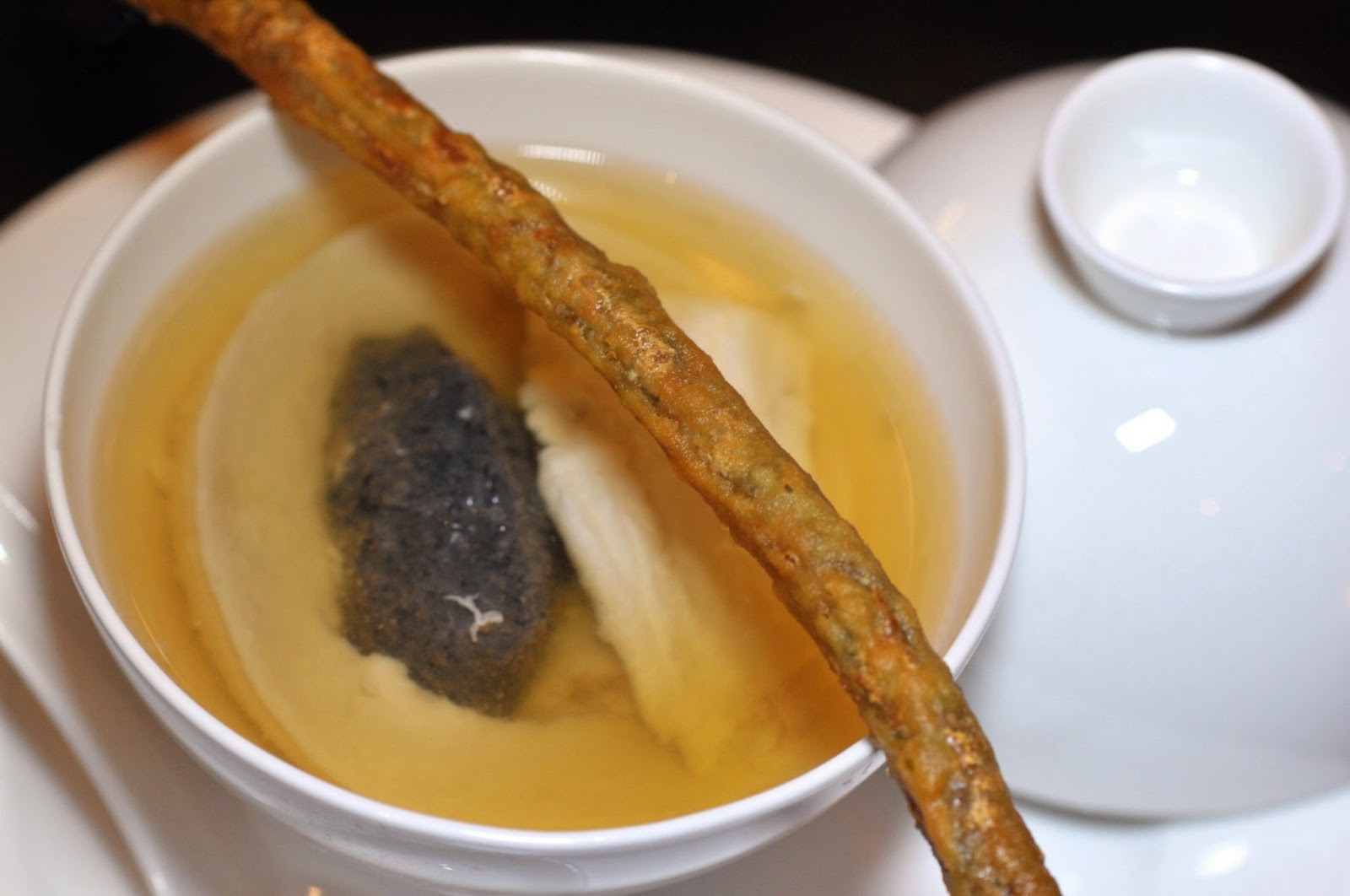 Now this is one of those rare times when I don't mind being in the soup...a sip of Wong's Double-boiled Minced Chicken Broth with Fish Maw, Conpoy and Black Chicken Quenelle (RM45.50++) is enough to convert me into a fan. Even more amazing is the ethereally soft 'beancurd' base in it...which is actually blended chicken meat! The black chicken quenelle with chopped waterchestnuts provides an unexpected crunchiness to the smooth and delicate textures of the fah kaw (fish maw) and dried scallop. This symphony is completed by a long crispy baton of deep-fried beancurd sheet rolled with chopped fresh black and button mushrooms and mashed potato. The chef deserves a standing ovation I tell you! 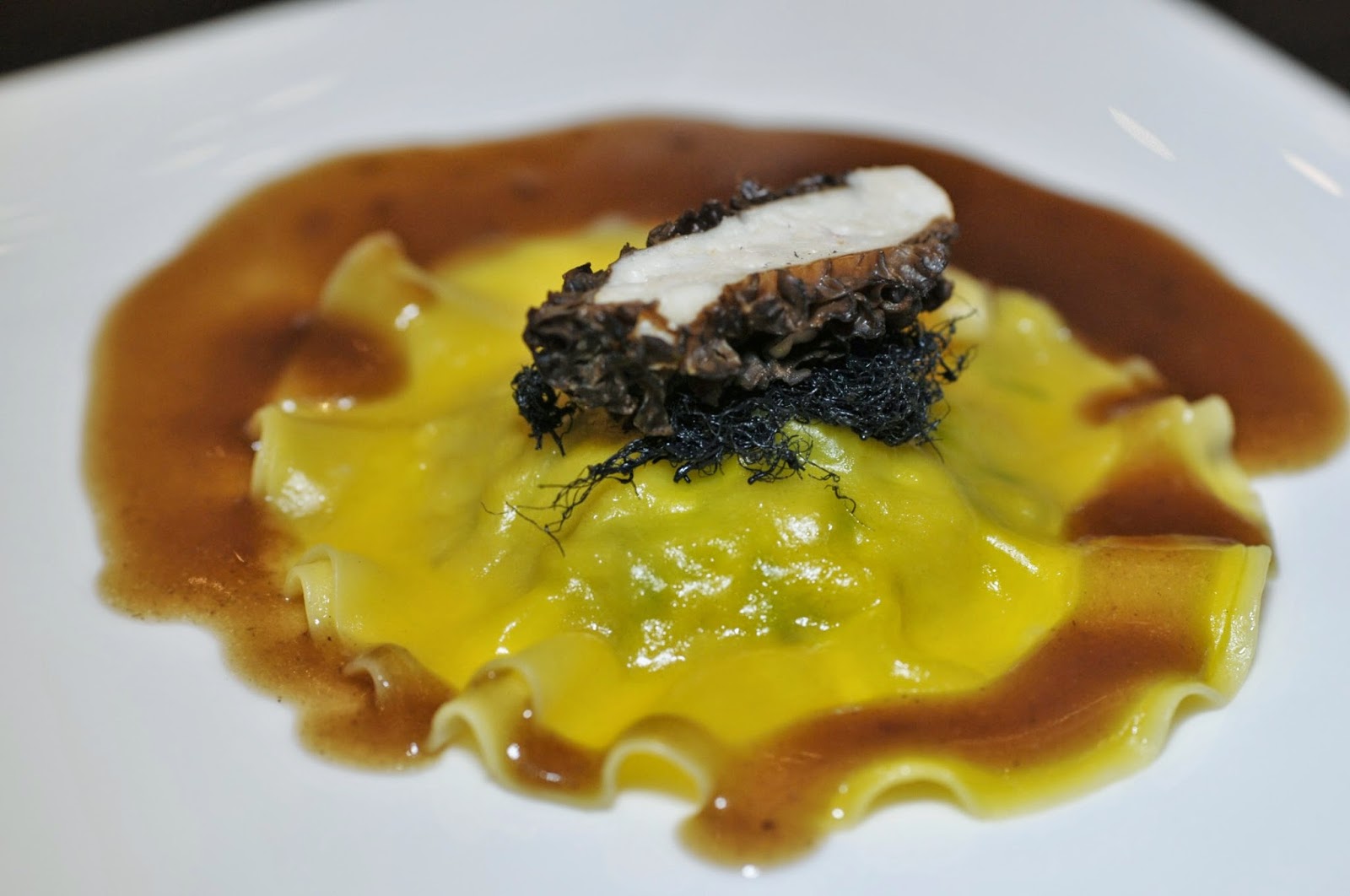 Taking a leaf from the Italians, Wong reinterprets the ravioli by fashioning his own using Hong Kong (low gluten) flour to create the Chicken Ravioli; stuffing the flour skin with fried shredded egg, chopped morel mushrooms and prawn paste (RM32.50++)and serving it with sublime porcini sauce. 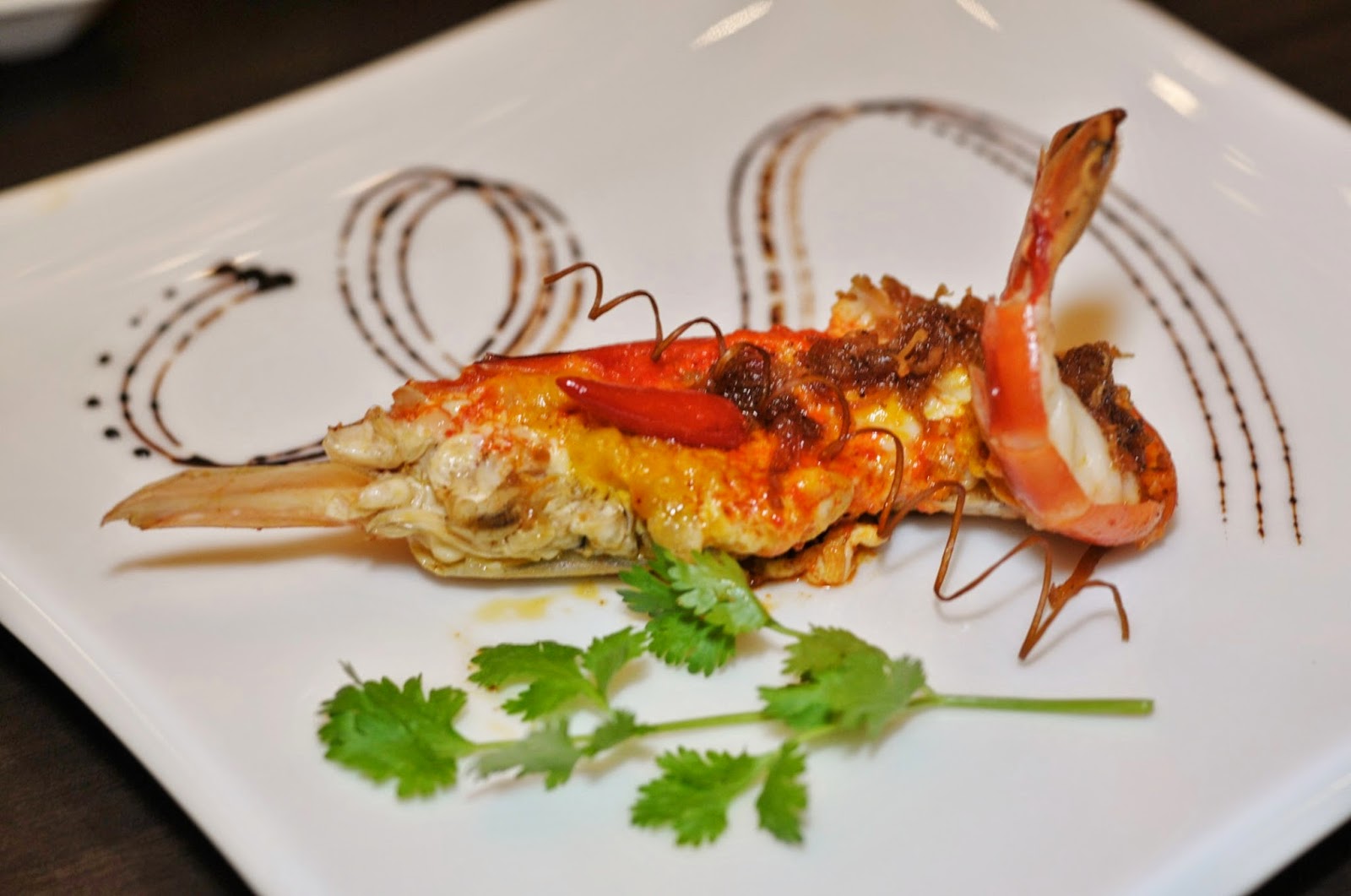 We were also treated to his famed signature Pan-fried King Prawns with XO Sauce (RM48++ per portion) - an indulgently rich speciality that's sinfully succulent and unctuous down to the last nook and cranny of its shell. 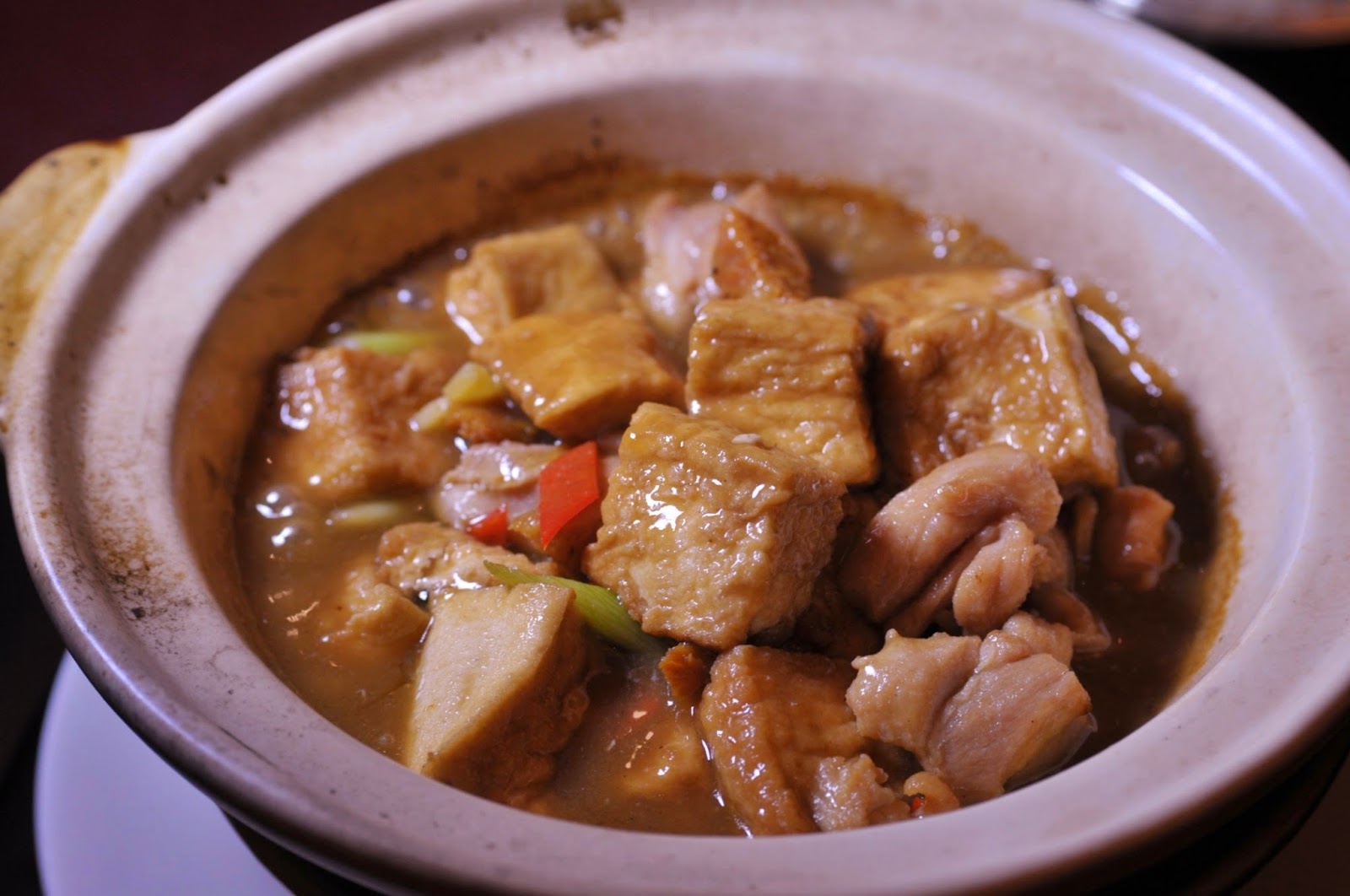 Lest you think Wong is only good at high brow dishes, he proves he can rustle up homespun fare with his Housemade Tofu with Diced Chicken & Salted Fish in Claypot (RM28/42/56++ depending on portion size). Inspired by the evergreen ham yue fah lam pou (salted fish with belly pork in claypot), this hearty offering makes no apologies for its strong flavours and bracing aroma; perfect to go with plain white rice. 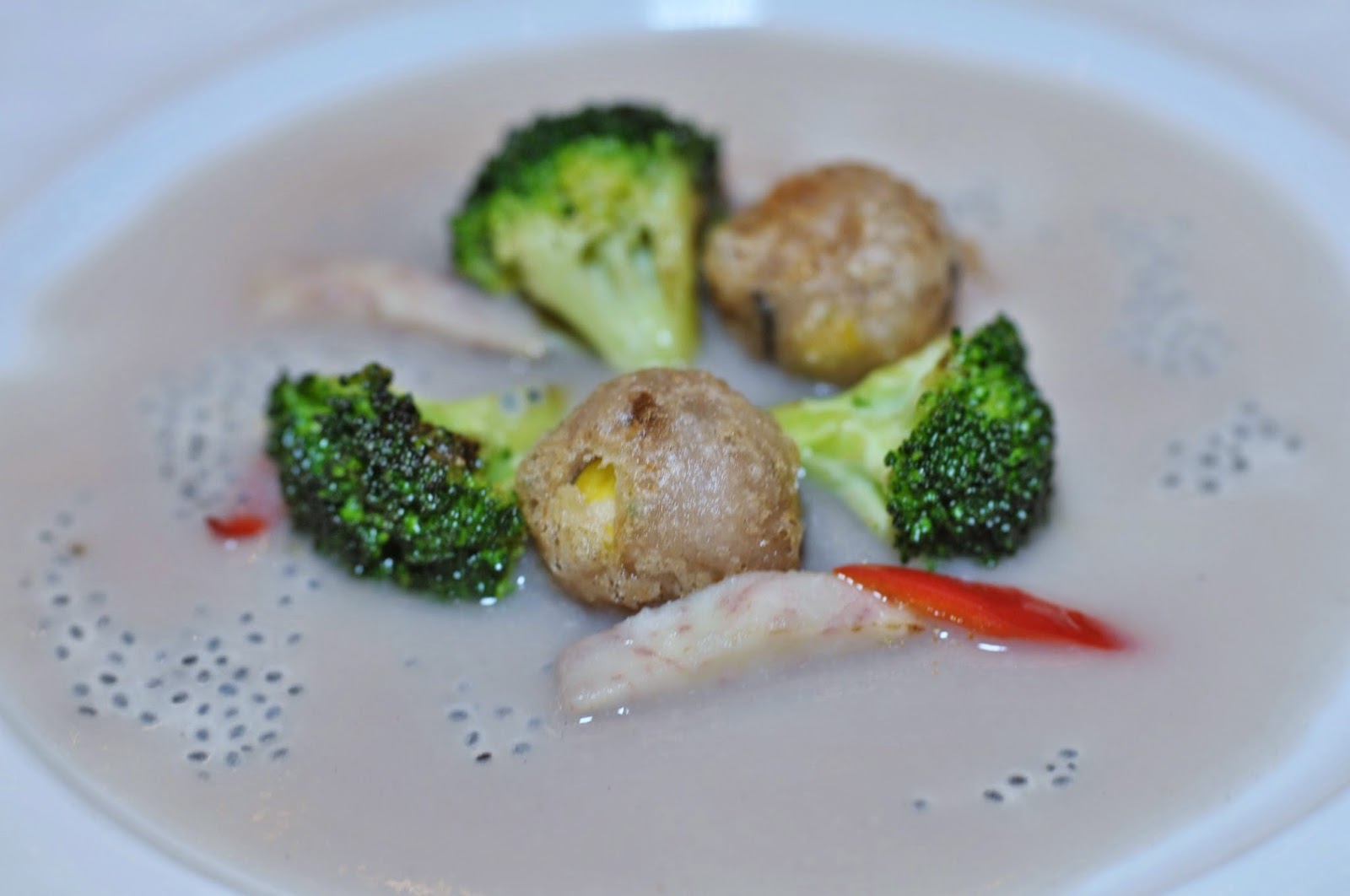 Lighter nuances emerge from the subsequent Stir-fried Broccoli with Sweet Corn Yam Puff (RM8.50++ per individual portion); aptly demonstrating the chef's ability to ramp up or tone down the spectrum of flavours in his repertoire. Surprisingly, the dish wasn't as bland as we had anticipated as bursts of faint sweetness are discernible in the sweet corn kernels and chicken broth that was used to blend with the yam and basil seed sauce. Differing textures come from the composition of little yam puffs, crunchy basil seeds and broccoli florets in the dish. 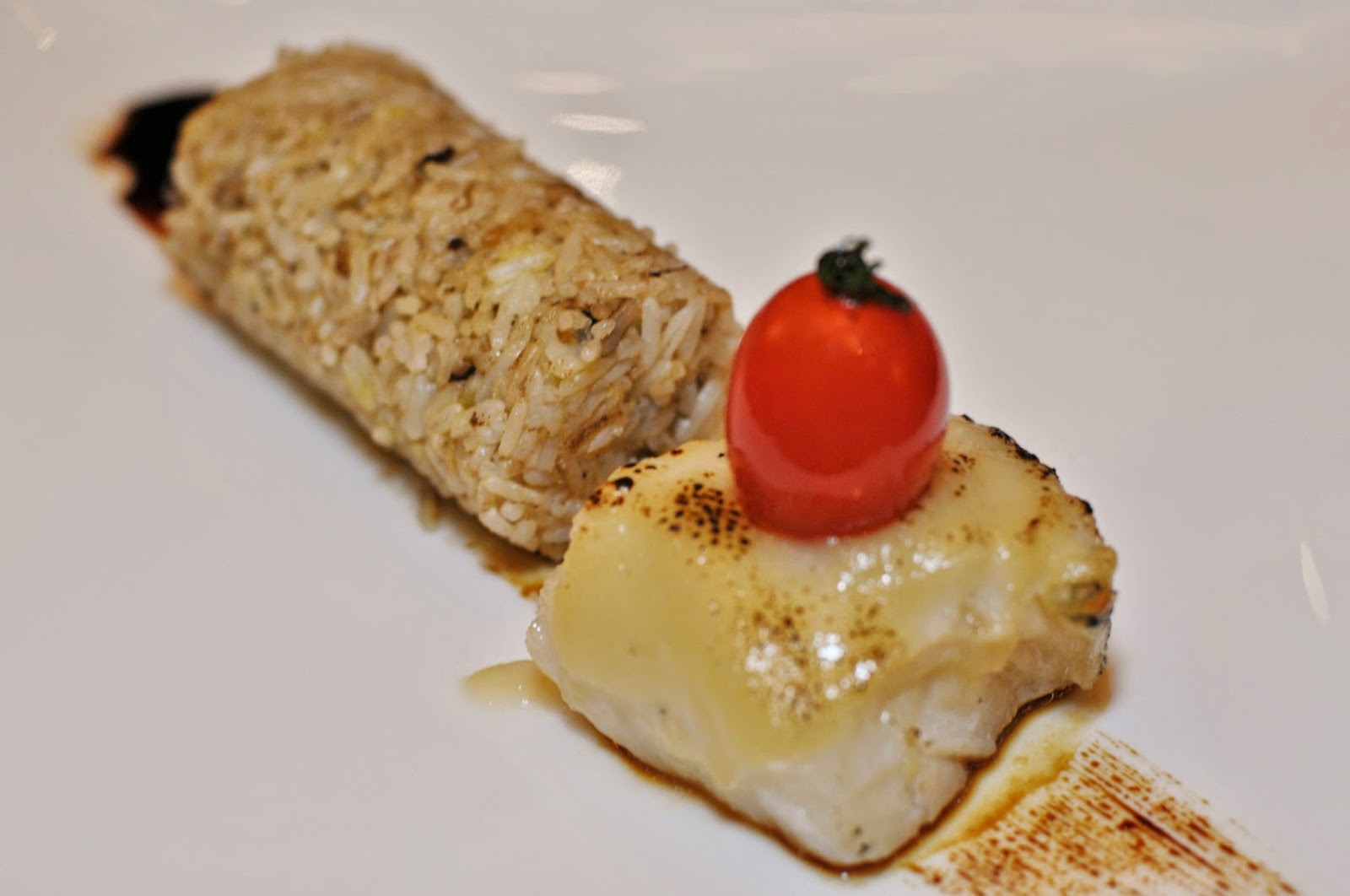 There's nothing ho-hum about the Fried Fresh Mushroom Rice with Baked Garlicky Cod (RM33.80++) either. Loaded with rustic fungi nuance, the rice came cylindrically molded and complemented by a square slab of cod topped with creamy garlic sauce and a baby tomato to form a visual feast. 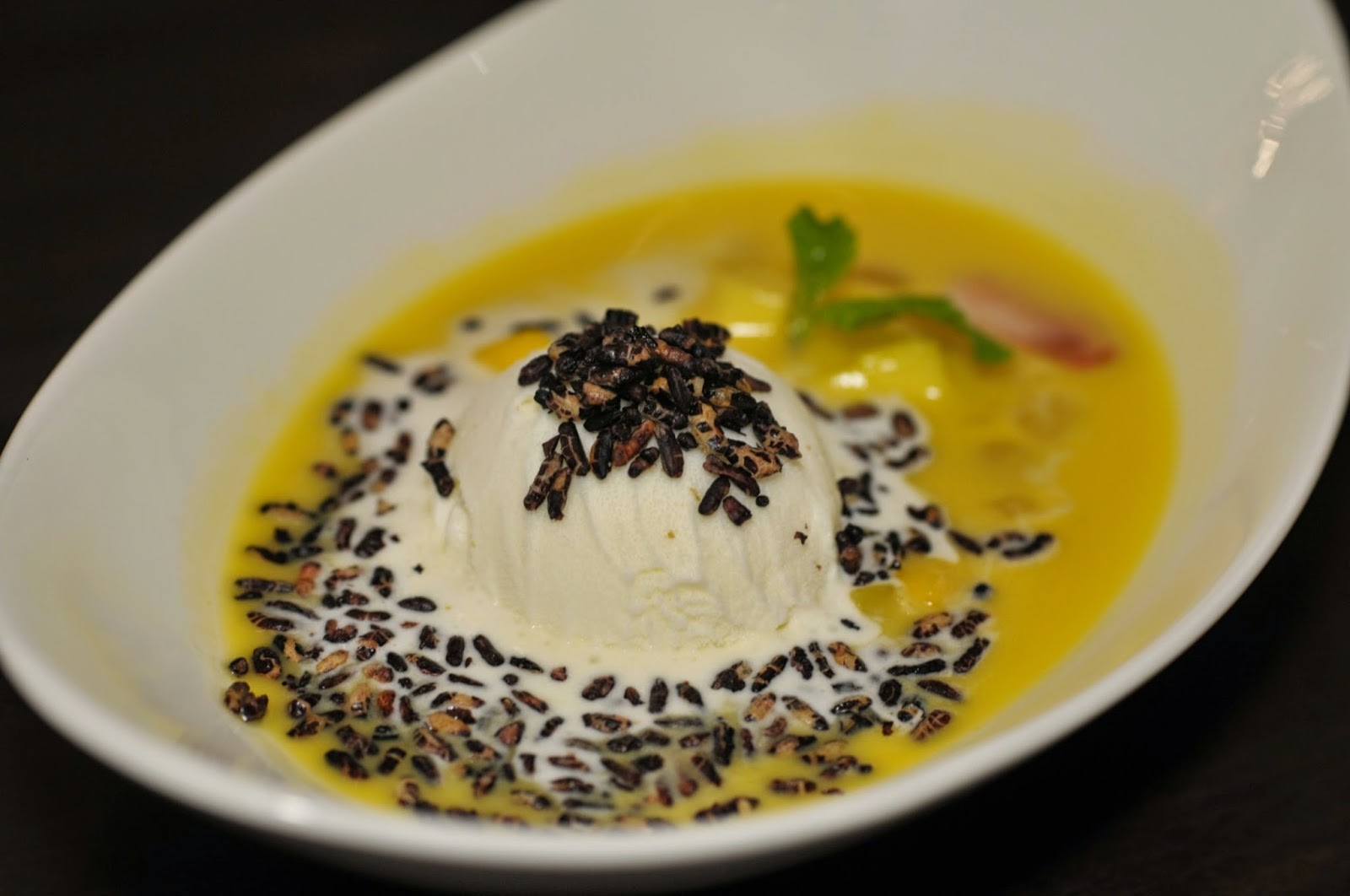 For the sweet finale, Wong conjured up Chilled Snow Lotus Seeds with Mango Sauce, Vanilla Ice Cream and Black Rice Crispies (RM12.50++). Another stunning creation that left us in wonder and brimming with respect as the puffy beras pulut hitam crispies and unusual suit leen chee (snow lotus seeds) got our jaws chomping away in between spoonfuls of fast melting ice cream and mango puree.


The dishes mentioned here are available a la carte as well as in various set menus priced between RM1,688++ and RM3,388++ per table of 10 persons.

Dishes look really delicious! Perhaps can try in the future, but a tad further for us:))

I had the luxury of dining at Kim Ma before too, now you're just making me miss the double boiled chicken soup!