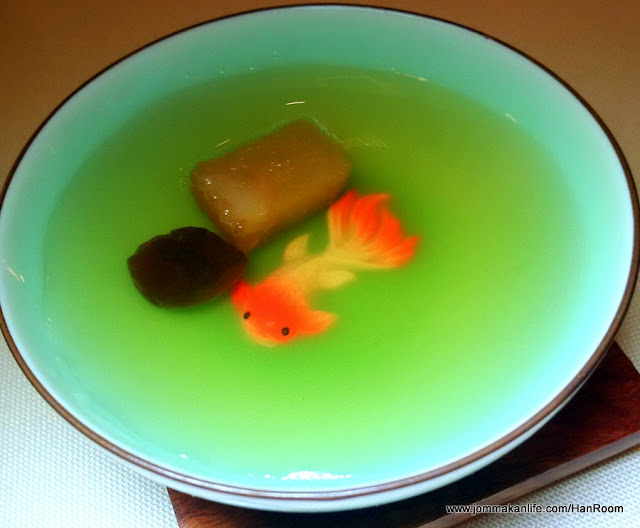 They say life’s a stage and it seems even dining out has to go beyond the mere act of serving food. Chefs and restaurateurs are constantly exploring ways to raise the dining experience bar and each meal is a command performance no less. 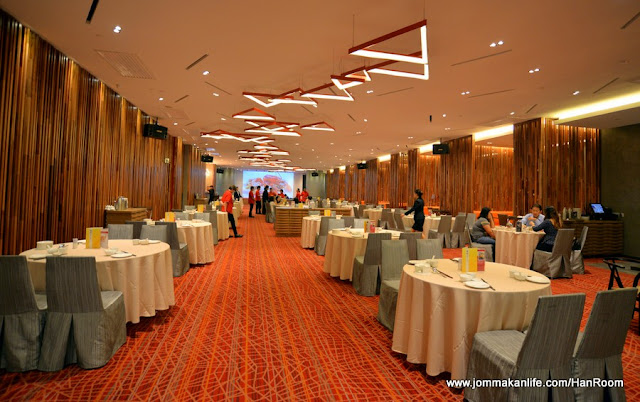 Our dessert of Chilled Snow Pear & Seaweed Ball in Teapot (RM18++ per pot) at The Han Room is a fine example. We were astounded when the sweet broth came in a matching teapot and bowl set cleverly designed to delight, adorned with a life-like, semi-3D goldfish at the base. When the broth is poured into the bowl, it deceives you into believing a goldfish is ‘swimming’ in the receptacle. 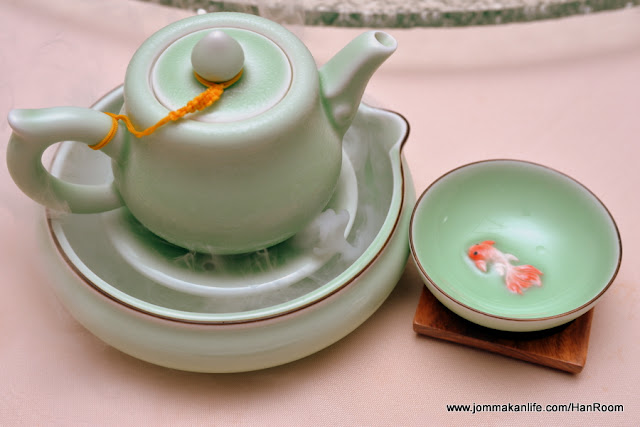 It is such little unexpected surprises that make The Han Room such a popular venue with Chinese cuisine lovers. Renovated in mid-September 2015 for 1.5 months, the newly relocated resto looks resplendent with minimalist Chinois chic. 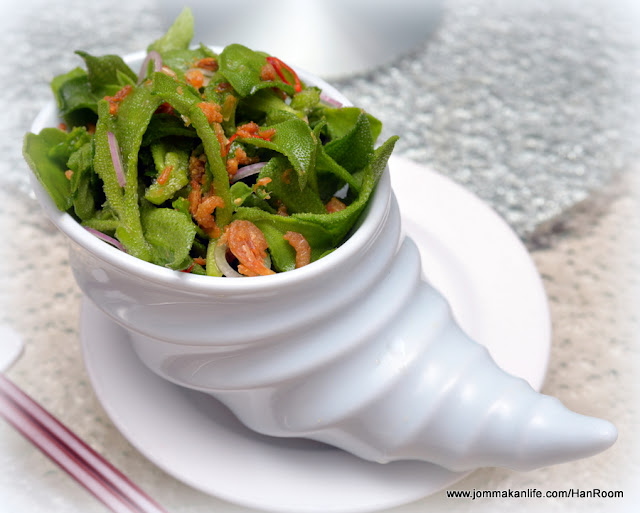 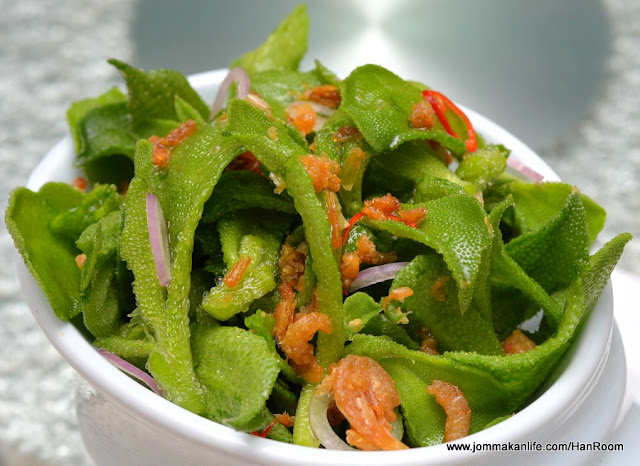 My first encounter with the unique vegetable known as ice plant was in Chengdu last year. Intriguingly, it was originally from South Africa and was widely cultivated in Japan and China on dry, arid land. Dotted with fine icy droplets on its leafy surface, the dewy green plant is almost artificial looking and has great ability to store salt. It’s also edible but bland like lettuce so when you order the Ice Plant Salad (RM28++ per portion) here, an appetising dip of sliced shallot, dried shrimps and chilli gives the crunchy leaves a nice zingy ‘kick’. 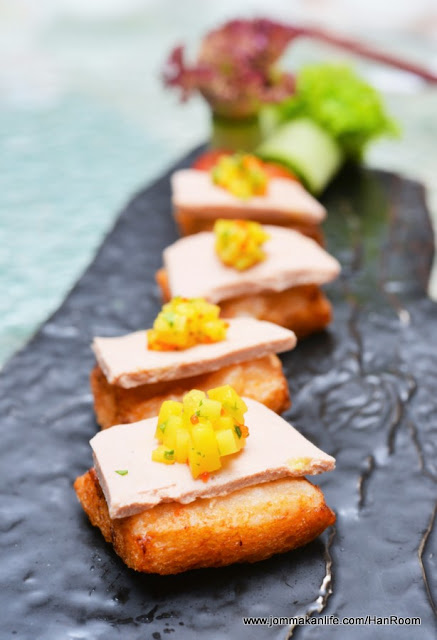 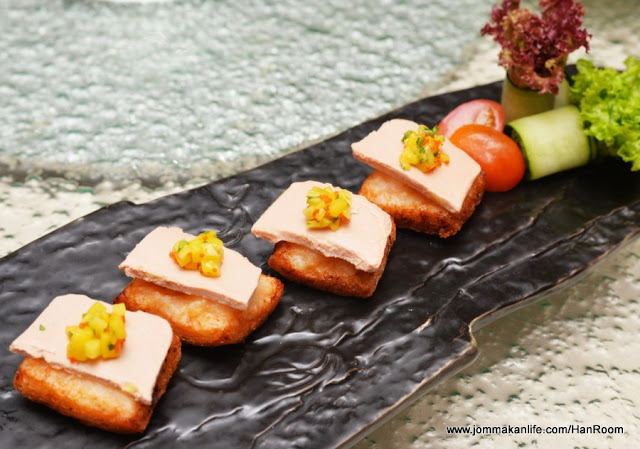 Decked with finely diced mango for a touch of tangy sweetness, the crunchy Prawn & Foie Gras Toast (RM28++ per portion) won’t go remiss with a glass of wine. It’s a simple but clever marriage of East & West culinary accents; the usual deep-fried toast with prawn paste switched up with sliced foie gras for extra luxe mouthfeel. 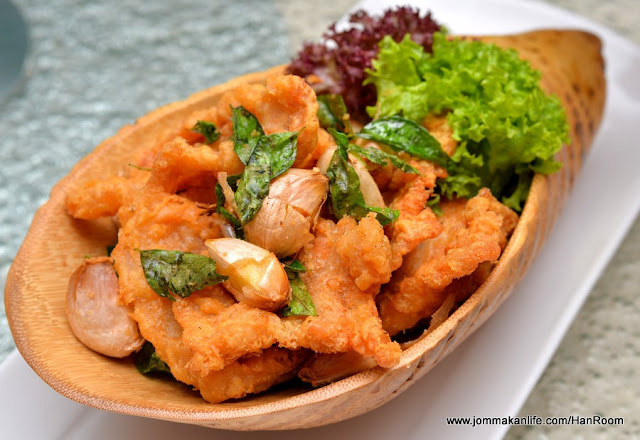 Porcine fans should find ample succour in the Crispy Pork Belly with Garlic (RM38++ per portion). We like how the mildly caramelised garlic pips sweeten the thinly sliced streaky pork while fried curry leaves infuse the meat with an aromatic scent. 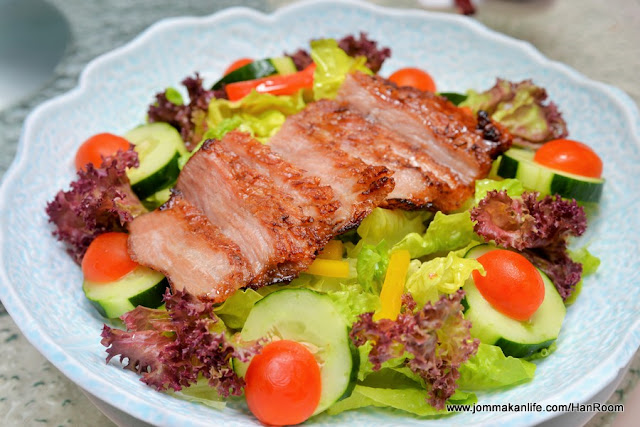 Chef Justin Hor and his erstwhile team have the knack for turning familiar Chinese dishes into updated temptations – the Charcoal Grilled Iberico Pork Neck with Garden Salad (RM45++ per portion) bears testament to this. According to Emily Chiam, our charming host for the evening, it’s a variation from the highly sought-after soft shell crab salad. The porky serving came atop a bed of fresh salad greens and some tangy dressing to minimise the guilt factor. 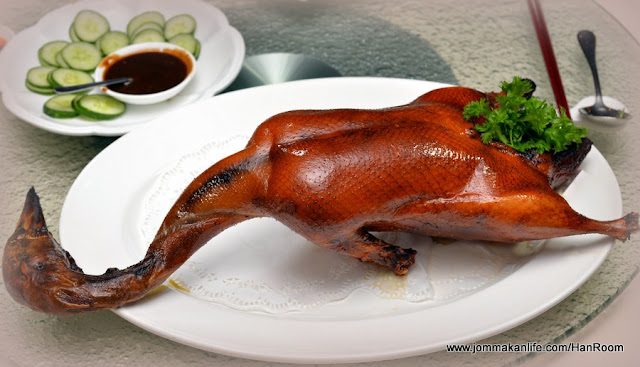 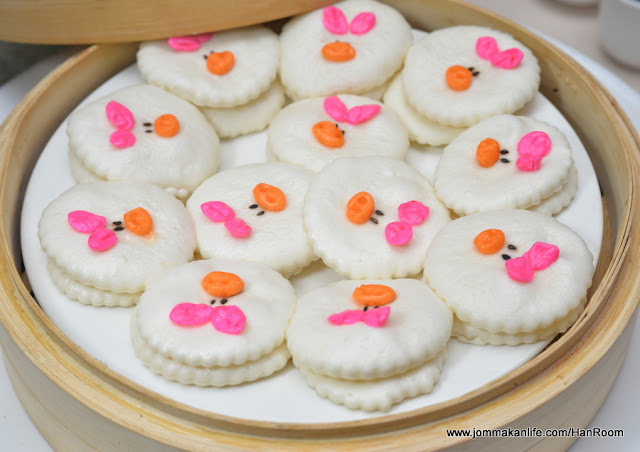 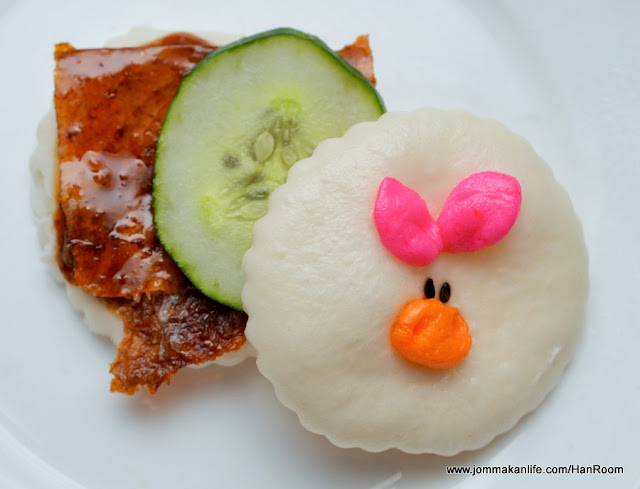 Peking Duck (RM118++) served with Piggy Buns is given a novel twist thanks to dainty Instagram-worthy buns shaped like cute piggy faces; a soft fluffy base for the crisp duck skin. Remaining duck bones and meat are whisked away to be stir-fried with noodles, resulting in another raveworthy dish. 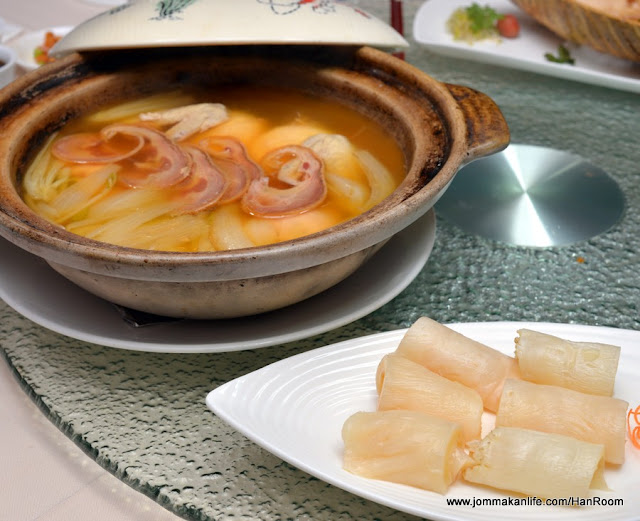 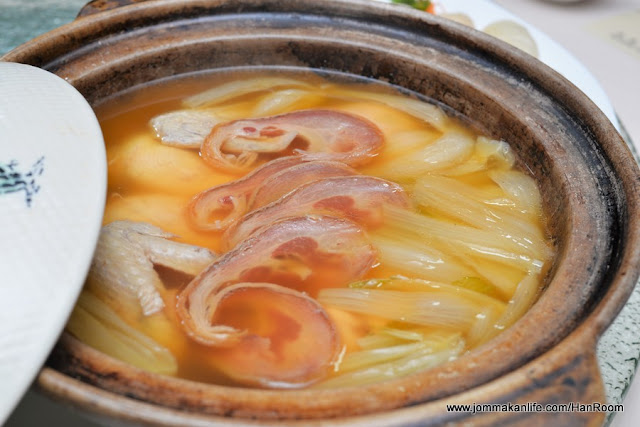 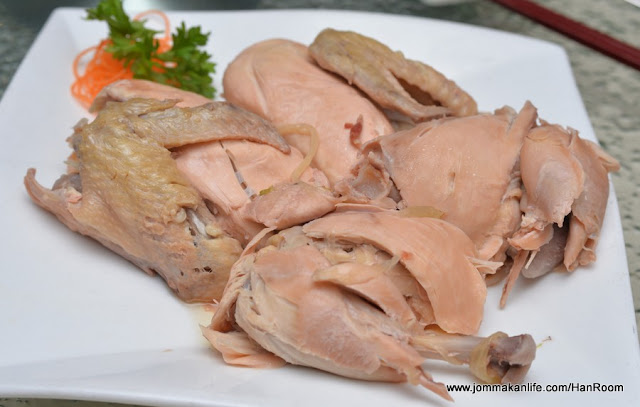 Soup fans should lap up the Fish Maw with Yunnan Ham in Superior Stock (RM168++ for a 4 person serving). Redolent with savoury umami flavour, we appreciate every spoonful of the superior stock; a salubrious canvas to showcase the fish maw’s toothsome texture, the soft Chinese cabbage and the briny taste of fine Chinese ham. 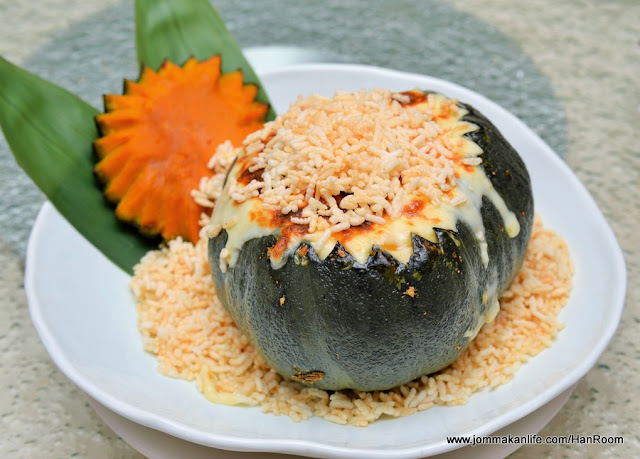 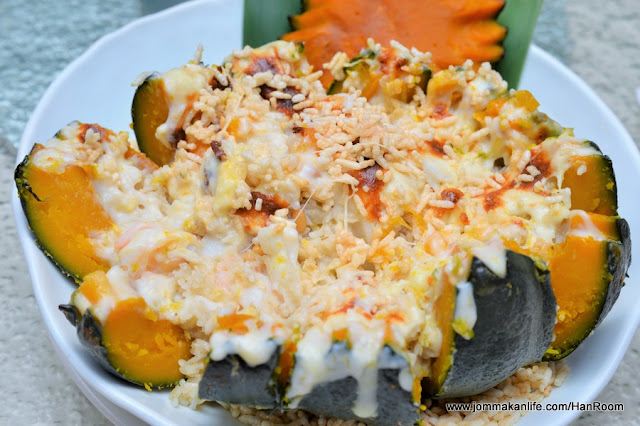 Covered with melted cheese on top, Baked Two Rice Varieties with Seafood in Pumpkin (RM58++ per portion) is mercifully nothing pedestrian like those char chan theng (HK tea house) baked cheesy rice. Enlivened with assorted seafood and pine nuts in a whole baked pumpkin, be prepared to jettison your no-carb diet for an irresistibly flavourful crispy rice puffs and fluffy cooked rice. 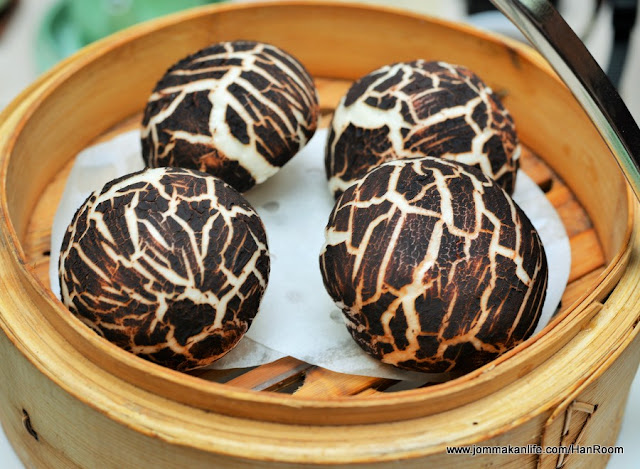 Dim sum is a hot commodity during lunch (from 11 am) on weekdays and brunch (from 10 am) on weekends and public holidays. The soft Chicken Mushroom Buns (RM8++ per basket) are fashioned to resemble brown crackly lined faux ‘mushroom’ caps but the filling tastes lighter on the palate when compared to regular char siew bao filling. 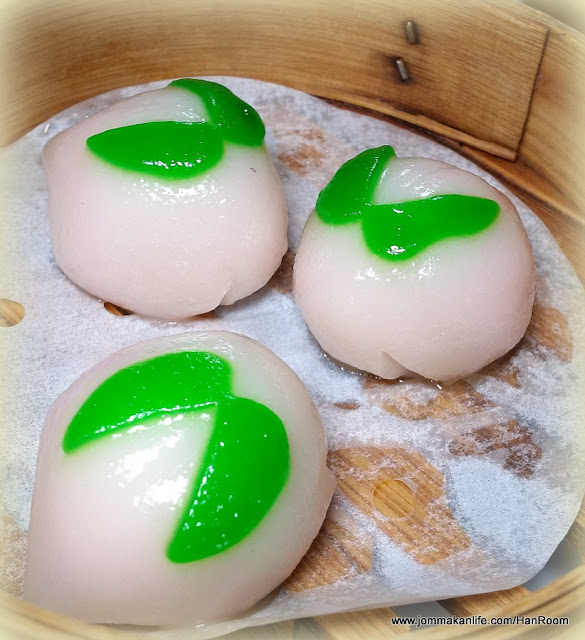 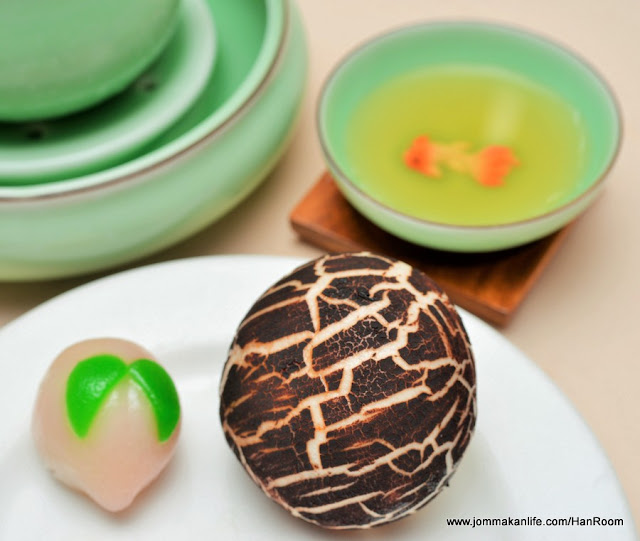 Health concerns among city folks have also see the rise of subtly sweet dim sum options and obviously, the Crystal Longevity Buns with Macadamia (RM8++ per basket) are supposed to fit the bill. Encased inside the stretchy, translucent tung meen skin similar to that of har gao (prawn dumplings), the nutty filling borders to the point of blandness on the palate. Oh well, one man’s dessert is another man’s 'poison' in these trying times.