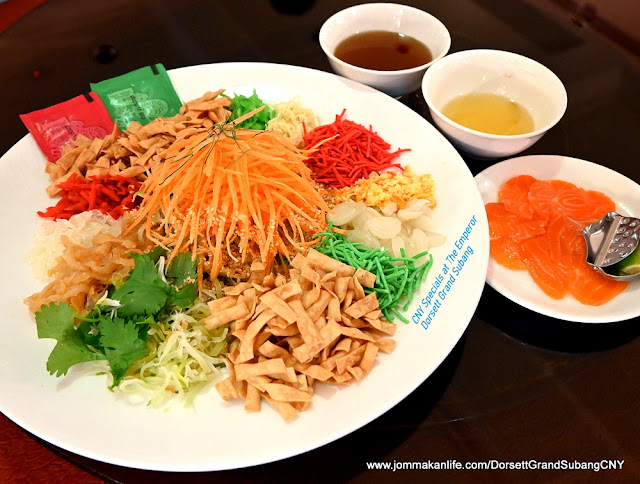 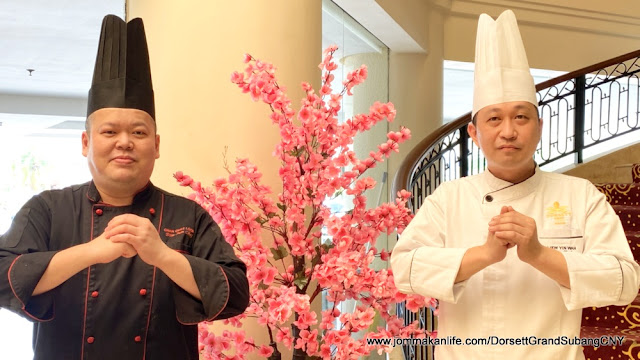 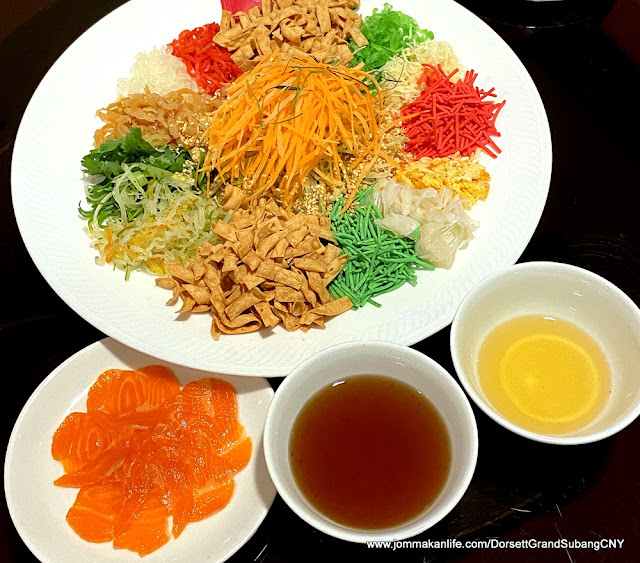 With a plethora of Prosperity Yee Sang, CNY a la carte specialities, and 3 celebratory set menus to choose from, hotel guests will be spoiled for choice to welcome the Year of the Tiger from 1 – 15 February. 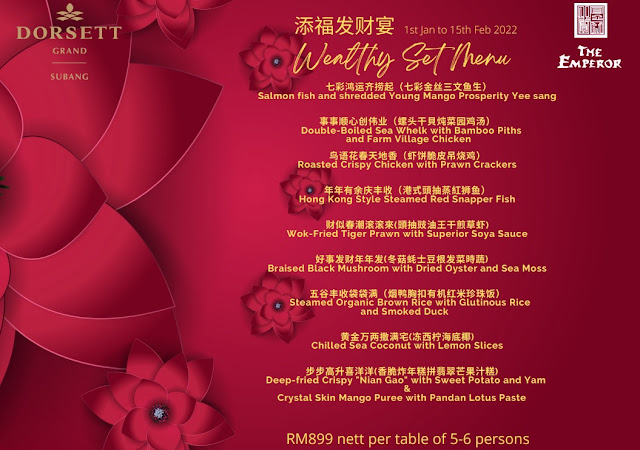 Chef Liew, whose accolades include 3rd placing in Battle of the Chefs at the 13th Penang International Sales Gastronomique in 2011, and part of the winning Malaysian team at the 2019 Salon International De L’alimentation (SIAL) Competition in Shanghai, proved adept at serving up treasured festive classics for the 8-course Wealthy Set Menu (RM899 nett for a table of 5-6 diners) we sampled. 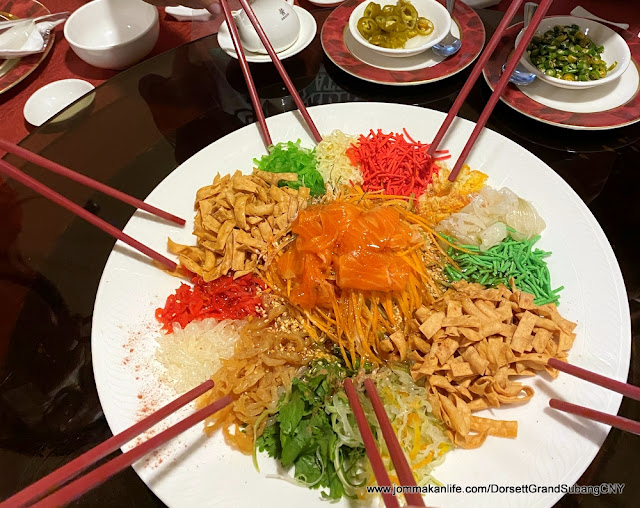 Fervent wishes of good health, return to normalcy and reunion with our near and dear ones were uppermost in our minds as we tossed and enjoyed the customary platter of delicious Salmon and Shredded Young Mango Yee Sang. The mixture of shredded vegetables, pickles, and crisps hit the spot with a tantalising plum sauce that wasn’t too thick nor cloying. 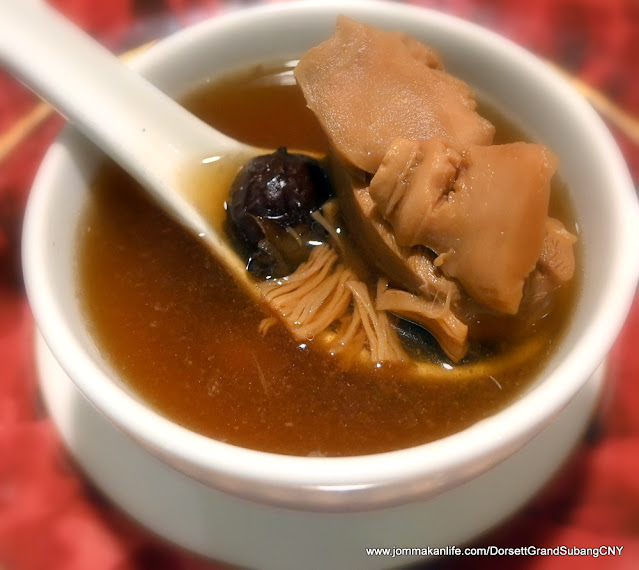 Wholesome and nutritious yet light on the palate, the Double Boiled Sea Whelk, Bamboo Pith and Farm Village Chicken Soup proved on-point. A dish that’s likely to gain the approval of the fussiest matriarchs. 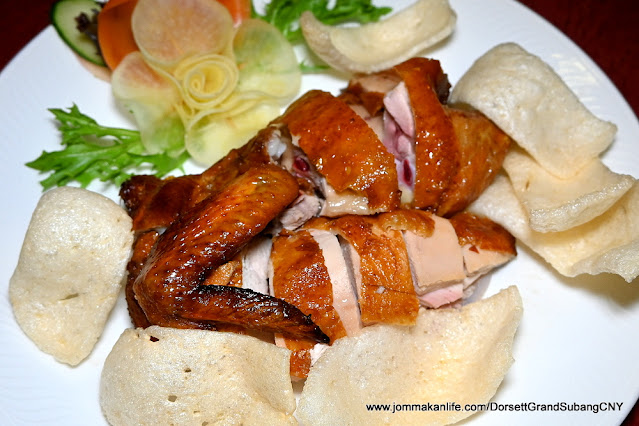 Reminiscent of grand banquets past, the timeless Roast Crispy Chicken with Prawn Crackers made it a show-stopper in this menu. Roasted to perfection, the paper-thin crispy skin and juicy meat would have tasted even better had it come accompanied with the classic ‘jiu yim’ (salt with ground Sichuan pepper and perhaps a smidgen of five spice powder) dip. 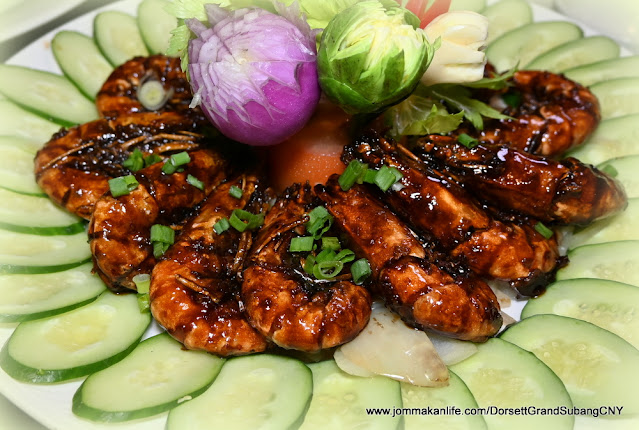 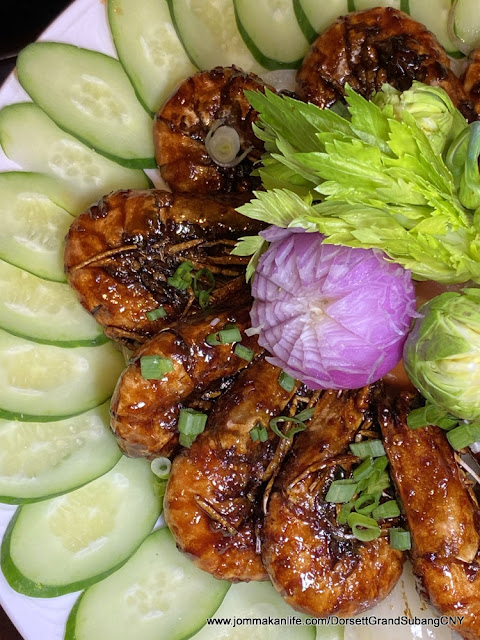 The chef’s winning streak continued with Wok Fried Tiger Prawns with Superior Soya Sauce. Rarely has any caramelised sauce coating sauteed crustaceans’ came on par with the finger-licking level but this one did. Coupled with the sweetness of stir-fried onions, we abandoned decorum to savour every morsel of the sweet, fresh crustaceans. 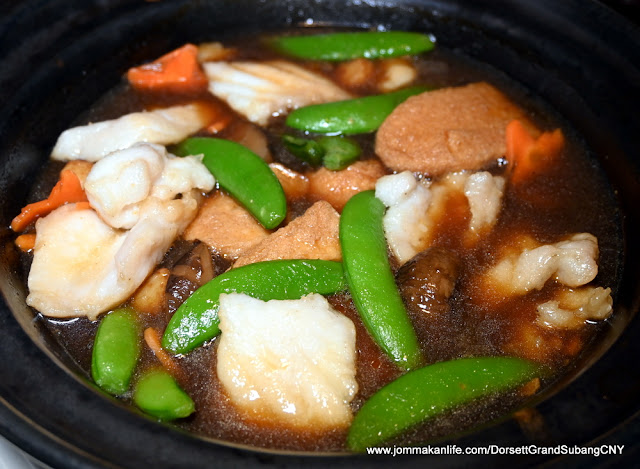 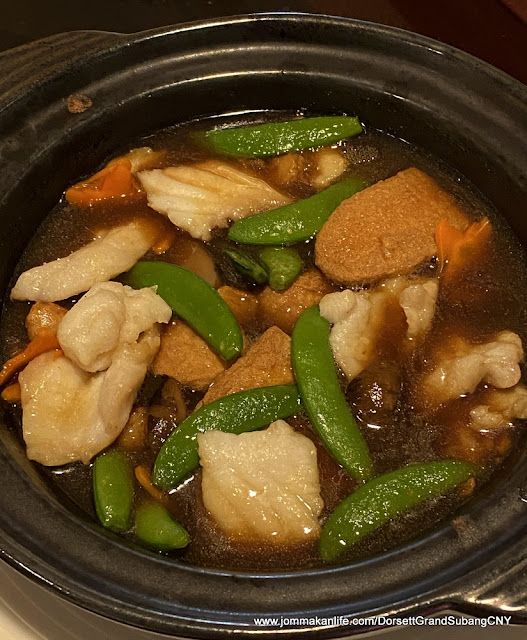 Hong Kong Style Steamed Red Snapper is featured in the actual festive menu. However, the chef’s recommended dish of Braised Housemade Beancurd with Fish Fillet (RM68 – small, RM118 – medium, RM168 – large) proved such a hearty hit, we made short work of it in no time. 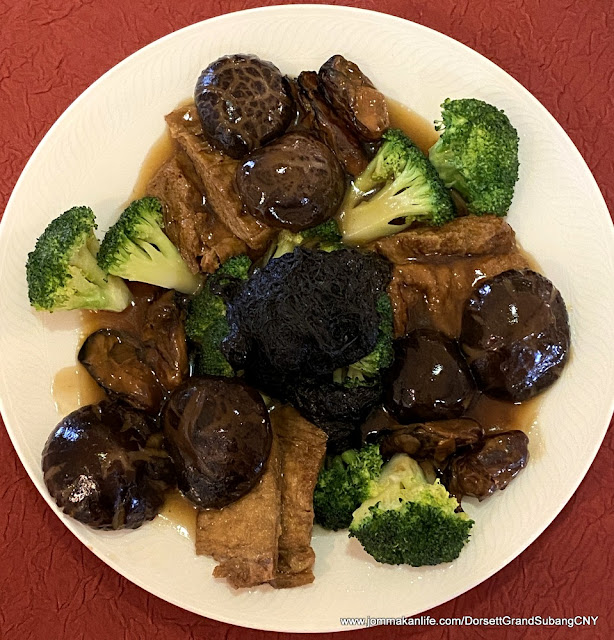 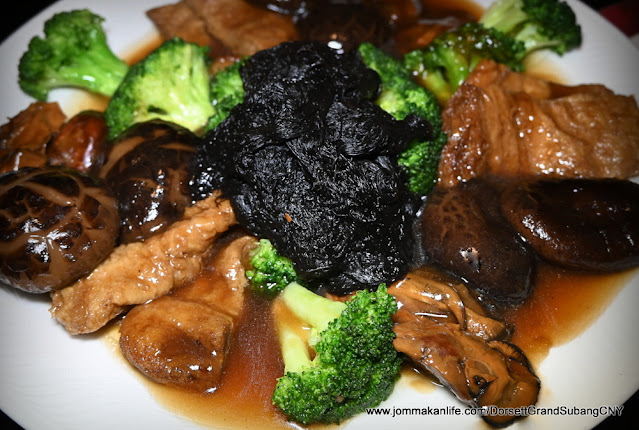 It would be remiss if Braised Black Mushrooms with Dried Oysters and Sea Moss wasn’t included in a festive meal. Eating plump succulent black mushrooms, smoky dried oysters and fine threads of black seamoss during CNY is akin to internalising everything fortuitous, good luck, prosperity, etc for the rest of the year. Now, who is going to argue with that? 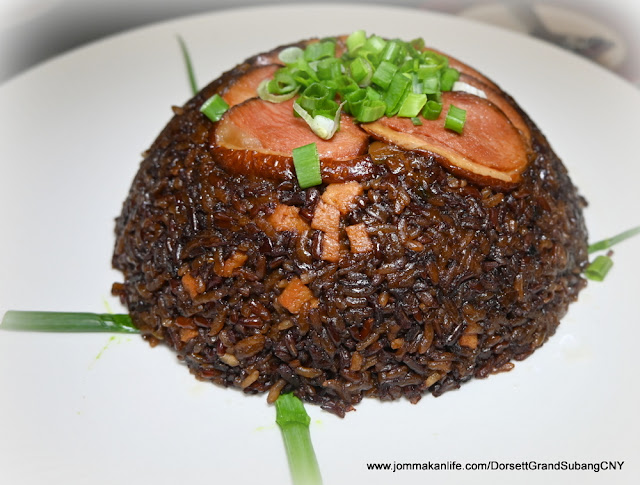 Chef Liew also gave the traditional waxed meat rice a healthier spin by serving Steamed Organic Brown Rice with Glutinous Rice and Smoked Duck. We are glad to report the recipe worked well as the inclusion of brown rice lent the dish a nutty slant whilst lightening the denseness of glutinous rice. 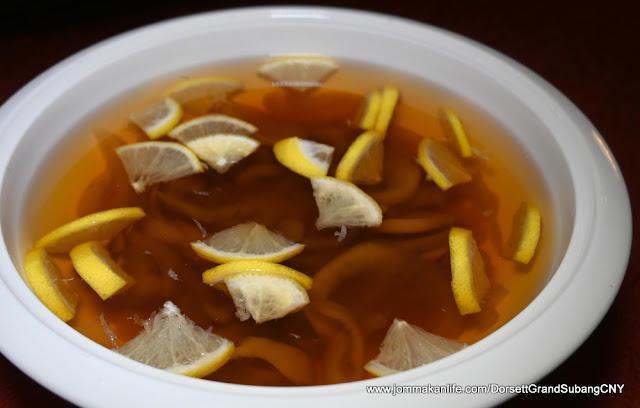 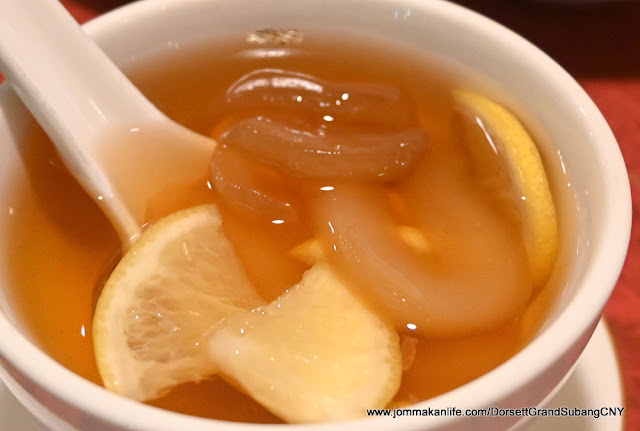 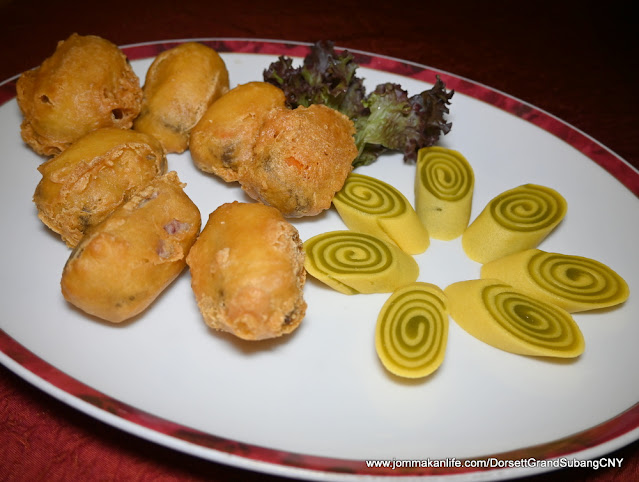 You can also order CNY Steamed Radish Cake (RM38 nett) for takeaway. Packed in a convenient gift box, the radish cake is ready-to-eat with toppings of fried shallot, spring onion and chilli. In Hong Kong, it's a festive treat enjoyed among family and friends throughout the Chinese New Year celebration. 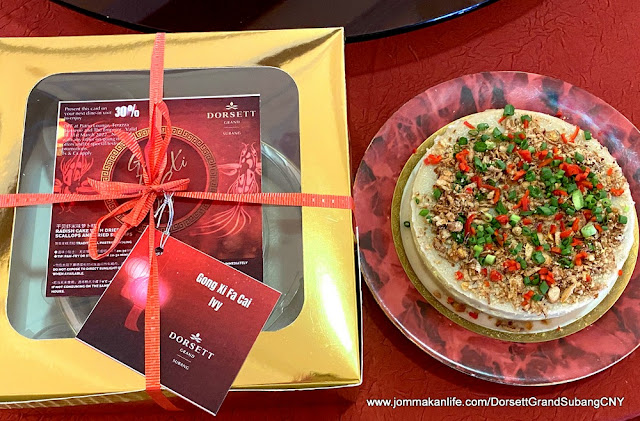 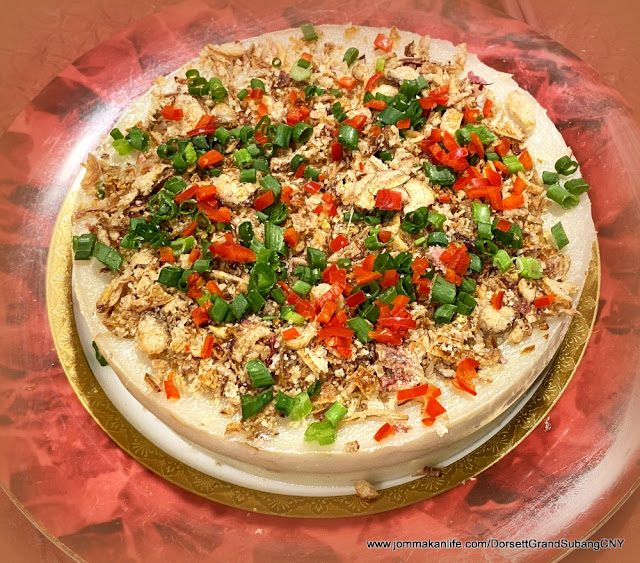