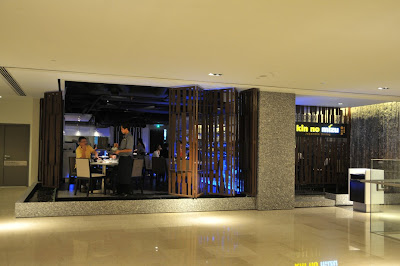 Veteran restaurateur Simon Sangawa was once the head chef of the now-defunct Nadaman restaurant at Shangri-la Kuala Lumpur. He was also the change agent who helped the 5-star hotel transform the restaurant's classical ambience and culinary direction into modern, cutting-edge chic that is now Zipangu.

Six years ago Sangawa-san again made his mark on the local food scene; steering his own Mizu restaurants (first at Bangsar Village followed by TTDI Plaza) to much success thanks to a fresh, no-holds-barred approach in redefining Japanese cuisine using French and other influences without compromising on the ingredients' freshness and customary aesthetics.

Now looking to continue that winning streak, Sangawa-san has opened Kin No Mizu at The Intermark. While the emblematic mainstays of sushi, sashimi, teppanyaki and tempura remain untouched, Sangawa is giving free rein to his most trusted lieutenant and former protégé, Brhma Dava aka Chef Devan to proffer a selection of trendy fusion dishes to patrons.

It is amazing how a dish of simple, braised daikon (radish) becomes a gastronomic delight with an indulgent topping of pan-fried goose liver in the house speciality of Foie Gras with Simmered Daikon (RM48++). The exquisite sweetness from the chunks of soft, tender radish and the clear broth left me at a loss for words; its orgasmic effect amplified manifold by the accompanying goose liver's indulgent richness and velvety smoothness. 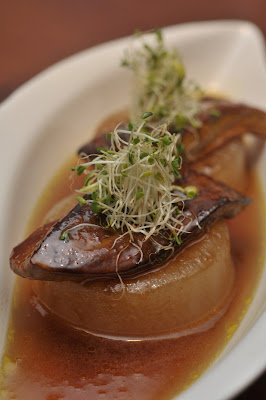 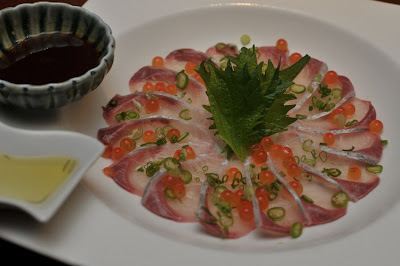 Go easy on the soy and sesame dressing if you are ordering the Maguro Tataki Salad (RM35++) or else you'd find the salad of seared tuna slices, avocado, lettuce, onion and cherry tomatoes too salty. 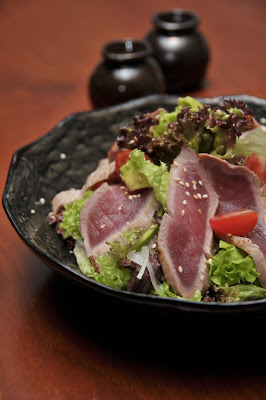 Be forewarned though that the dish's forceful onslaught may leave your palate somewhat blunted. My partner and I had a hard time discerning the rich, sweet nuances of the Sautéed Jumbo Prawns and Scallops with Truffle Sauce (RM65++). 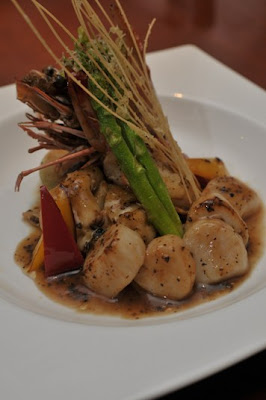 Personally I find springy ramen and tangy-sweet tomato-based broth make strange bedfellows. But the Tomato Ramen (RM20++) may just appeal to today's new breed of diners who are raised on hamburgers, pastas and pizzas. Admittedly, the gravy grows on you after a while - sprinkle on some togarashi (Japanese seven-flavoured spice) and the dish tastes almost similar to mee rebus gravy. 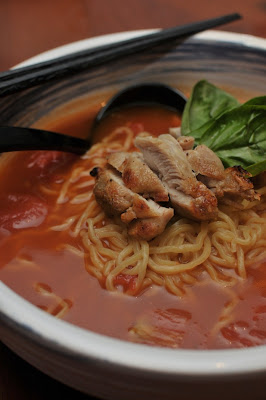 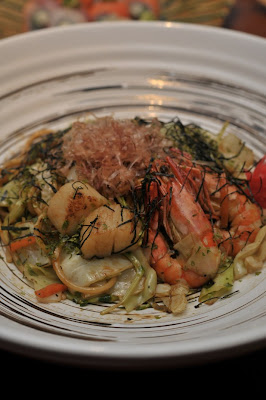 The only offering that I wasn't big on was the Kin No Mizu Roll (RM45++). I find the cream cheese's cloying richness too strong against the delicate accents of fresh salmon and yellow tail slices that adorned the vinegared rice rolls. 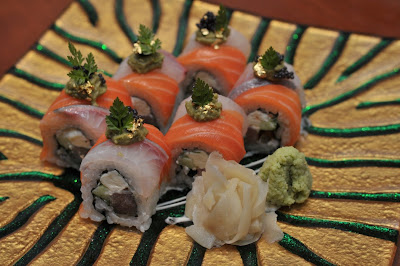 Decor-wise, Kin No Mizu replicates some elements found at its sister Mizu outlets: from the external feature wall with cascading water to the clear glass walkway atop a bed of running water and oval stones. Tucked within its tranquil Zen-like interior is a sushi and a teppanyaki counter, and some private or semi-private dining rooms for small and medium-sized groups.

So if you're inclined to Japanese cuisine with nouveau touches, you can't go wrong at Kin No Mizu.

Nice pictures and food description. Shall try this outlet out when I am back ......rapp

Tks KH. The outlet's worth a try...I hv been to the sister outlet, Mizu at Bangsar Village and the food quality is similar - close to what you'd get at 5-star hotels.