CLOSE ENCOUNTERS OF THE CHEF KIND

Foodies had a field day recently when two celebrity chefs made their waves in Kuala Lumpur recently. Firstly, Sean Connolly - the leading man for Asian Food Channel's (AFC) Under The Grill and On The Grill series cooked up at a storm for the local media members. 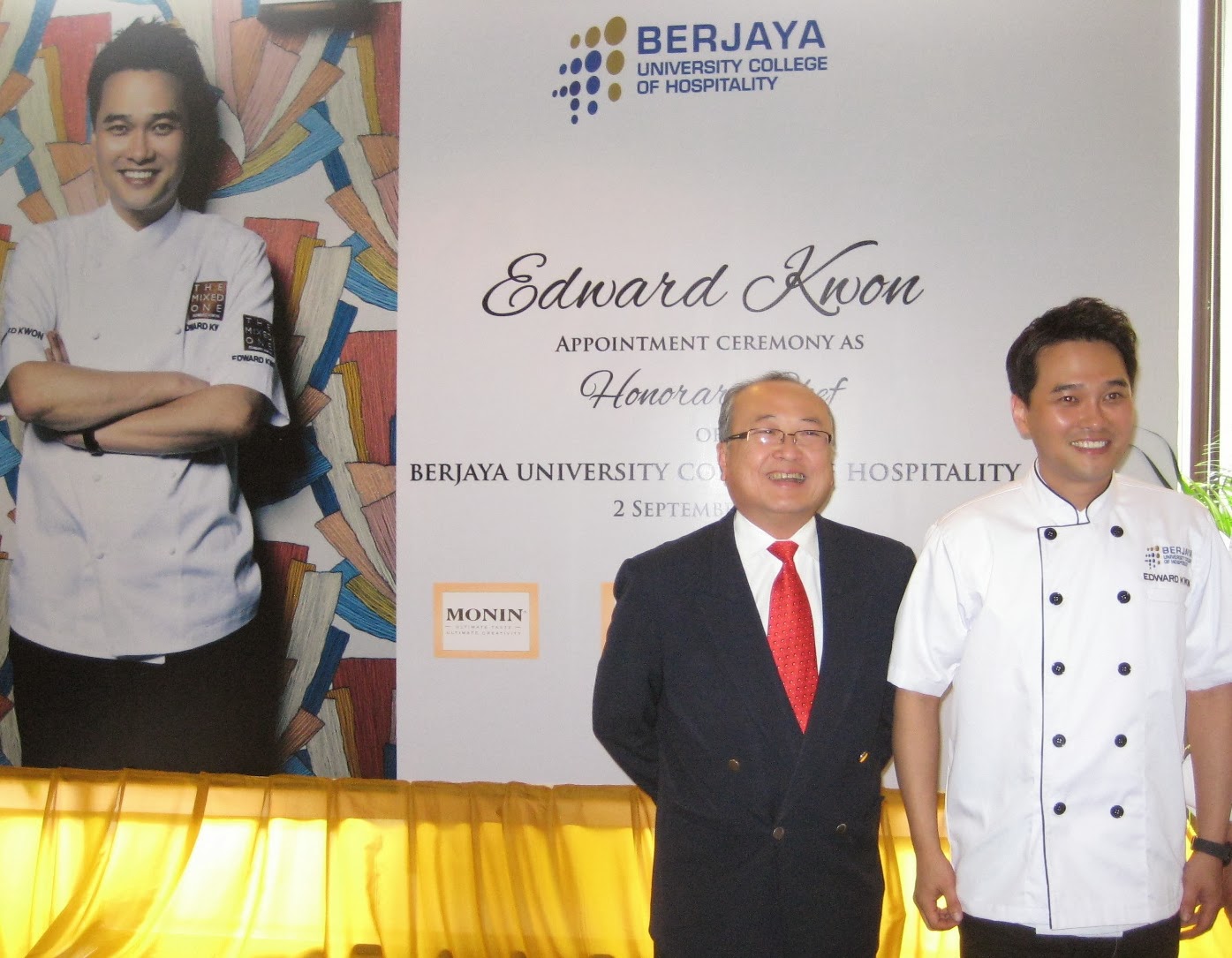 Hot on his heels came Korean celebrity chef Edward Kwon whose debut TV show, Ed-Ventures in Asia (also shown on AFC) was feted for his appointment as Honorary Chef of Berjaya University College of Hospitality (UCH). 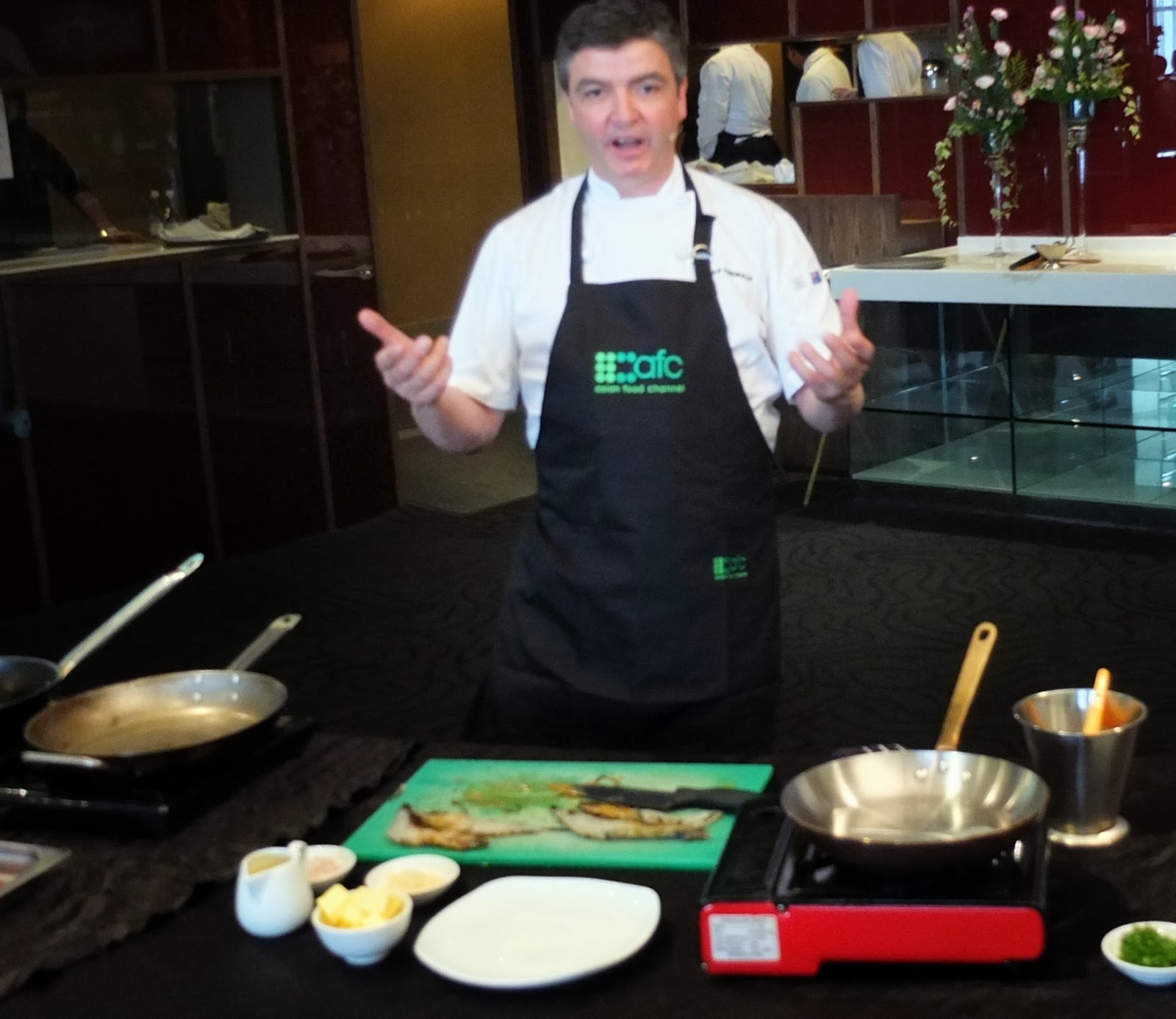 Lucky fans and media invitees had a chance to get up close and personal with Australian based Connolly - one of Oz's and NZ's most respected and recognisable chefs at Samplings on the Fourteenth. He also gave us a sampling of his culinary wizardry by rustling up three courses within a short span of time. 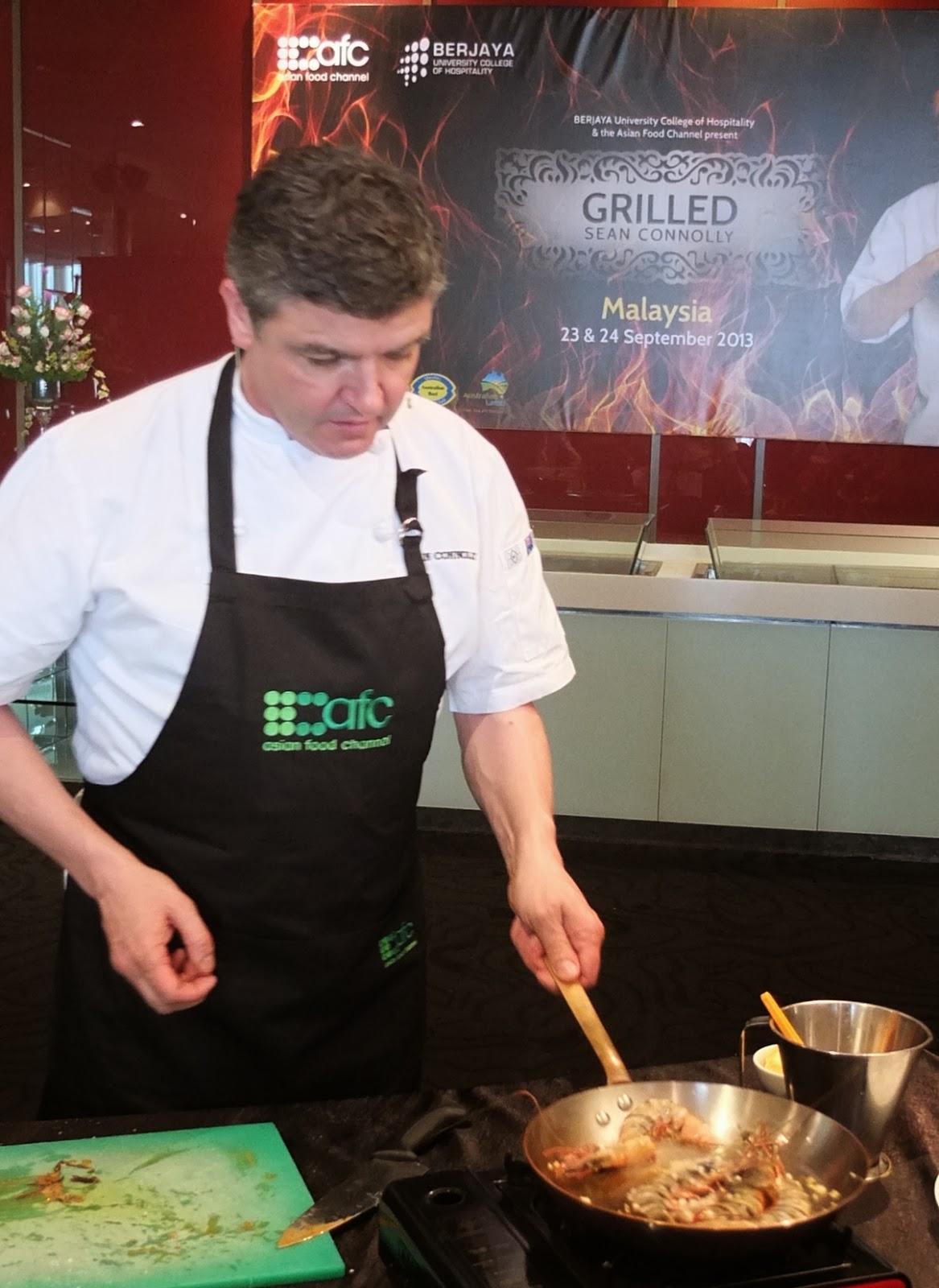 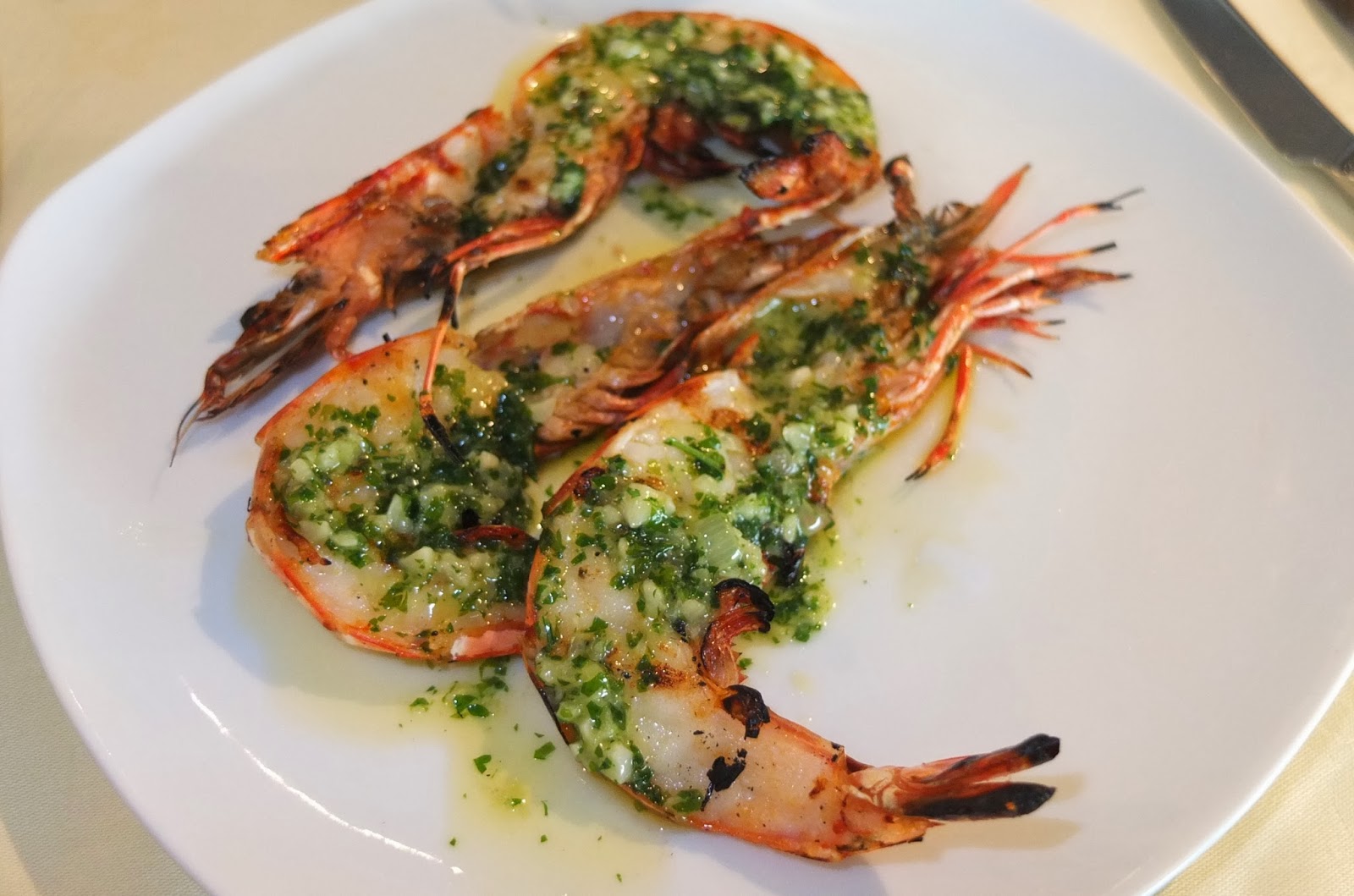 The delicious aroma emanating from his first dish of Grilled Garlic and Prawns was enough to leave us drooling with anticipation. The actual creation naturally tasted sublime; the succulent crustaceans laced generously with golden, rich garlicky sauce. 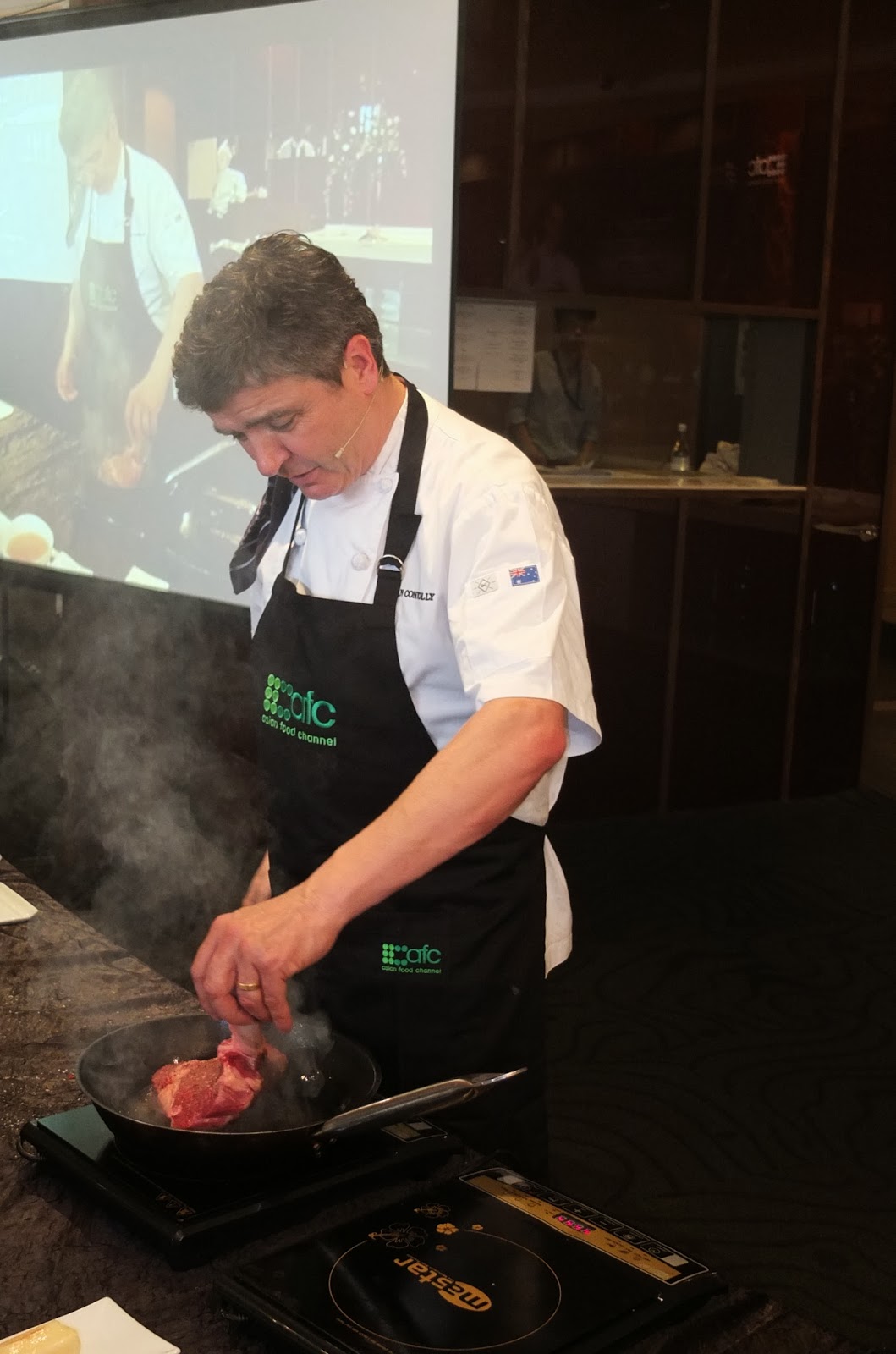 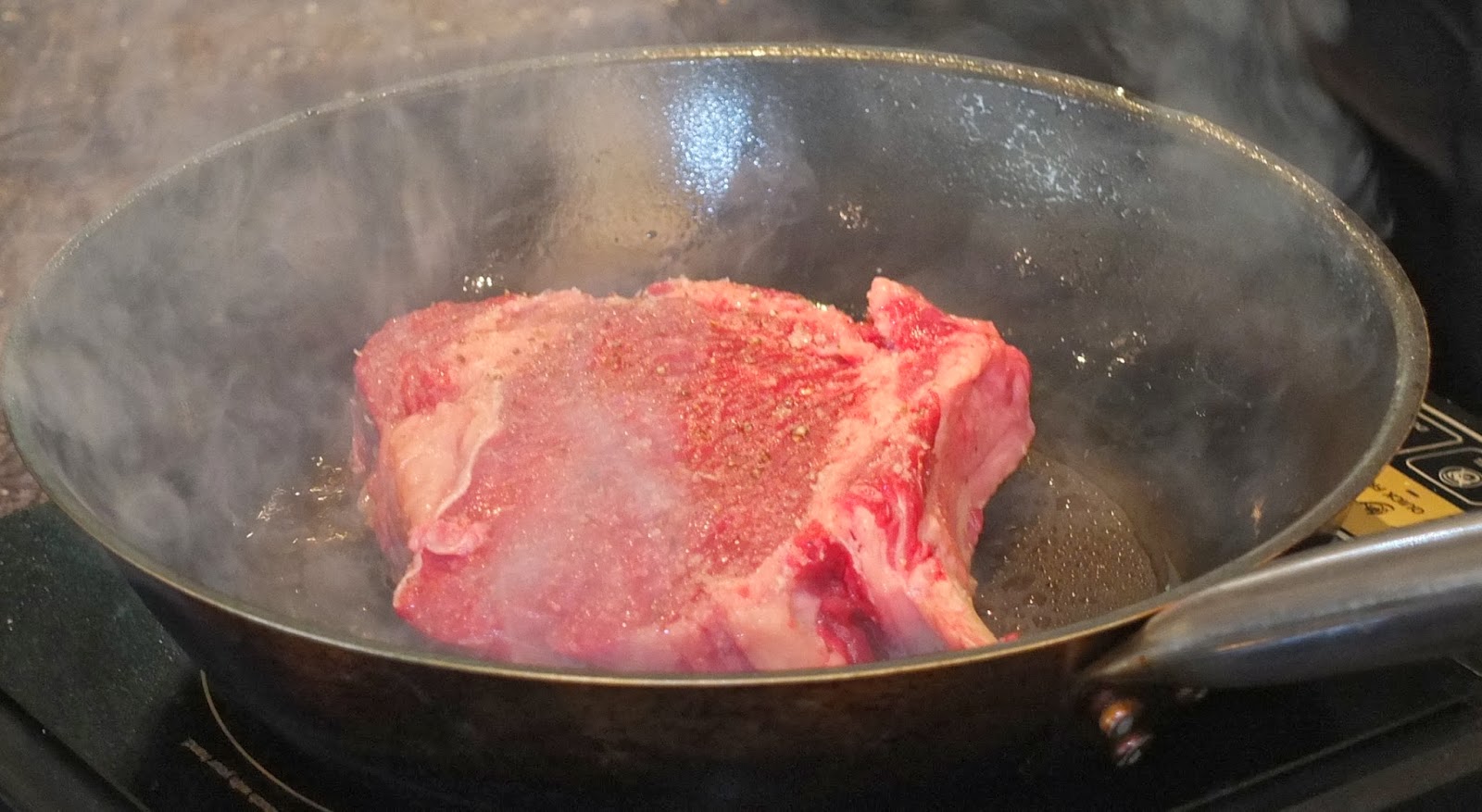 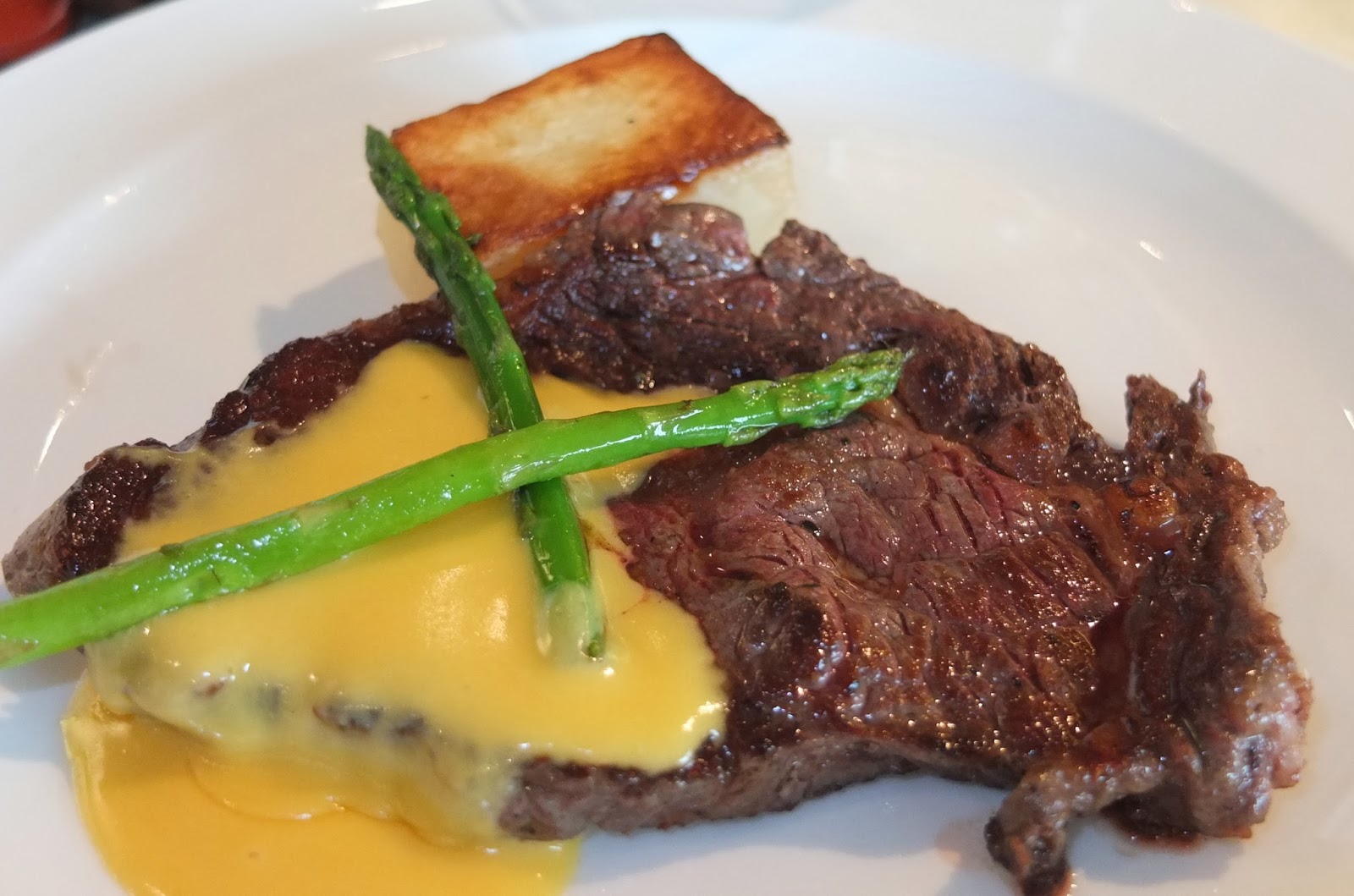 This was followed by a splendidly grilled Australian Ribeye with Miso Hollandaise, Fondant Potato and Watercress. The steak was cooked just how I like it - medium rare bursting with flinty juiciness that was good to the last bite. 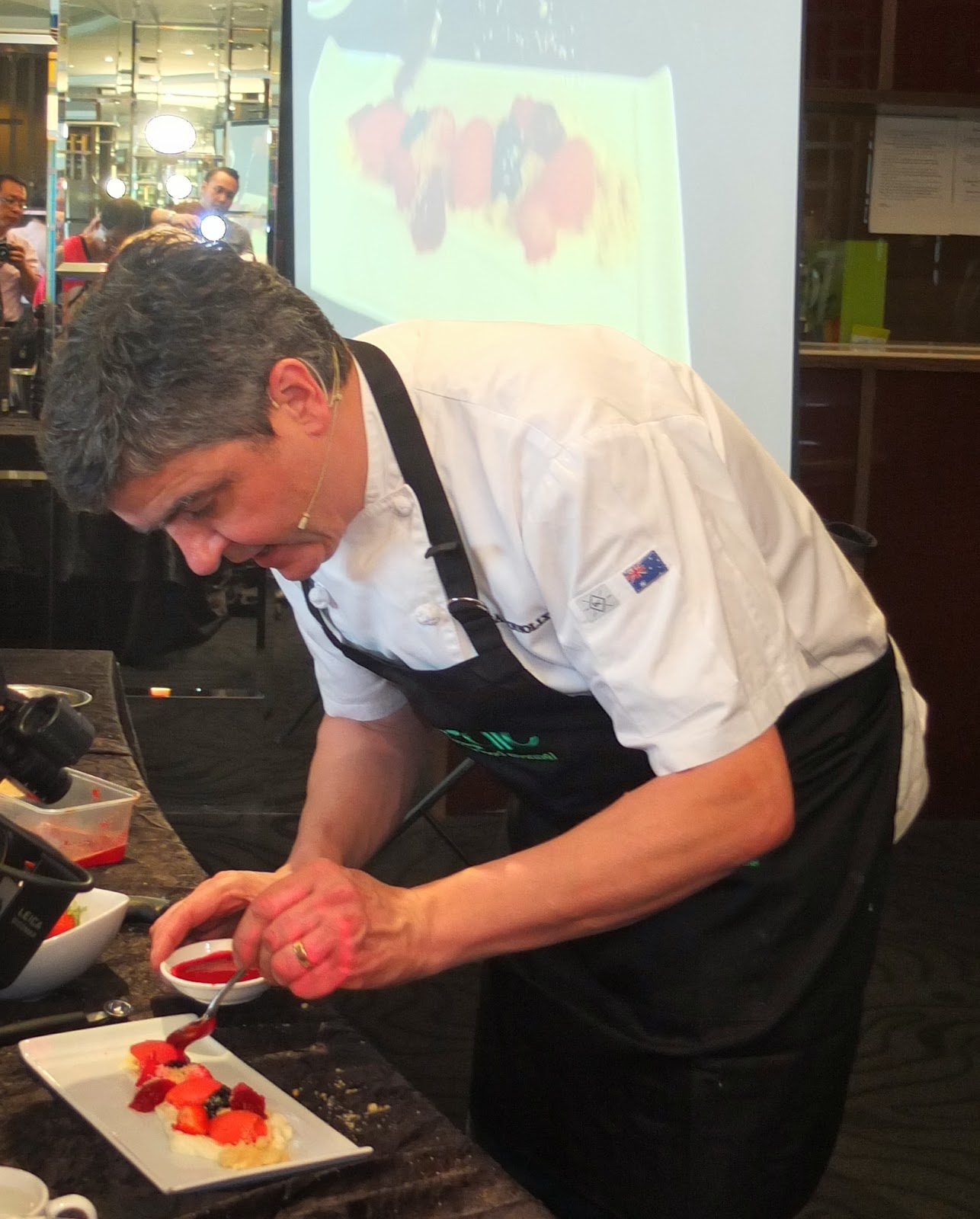 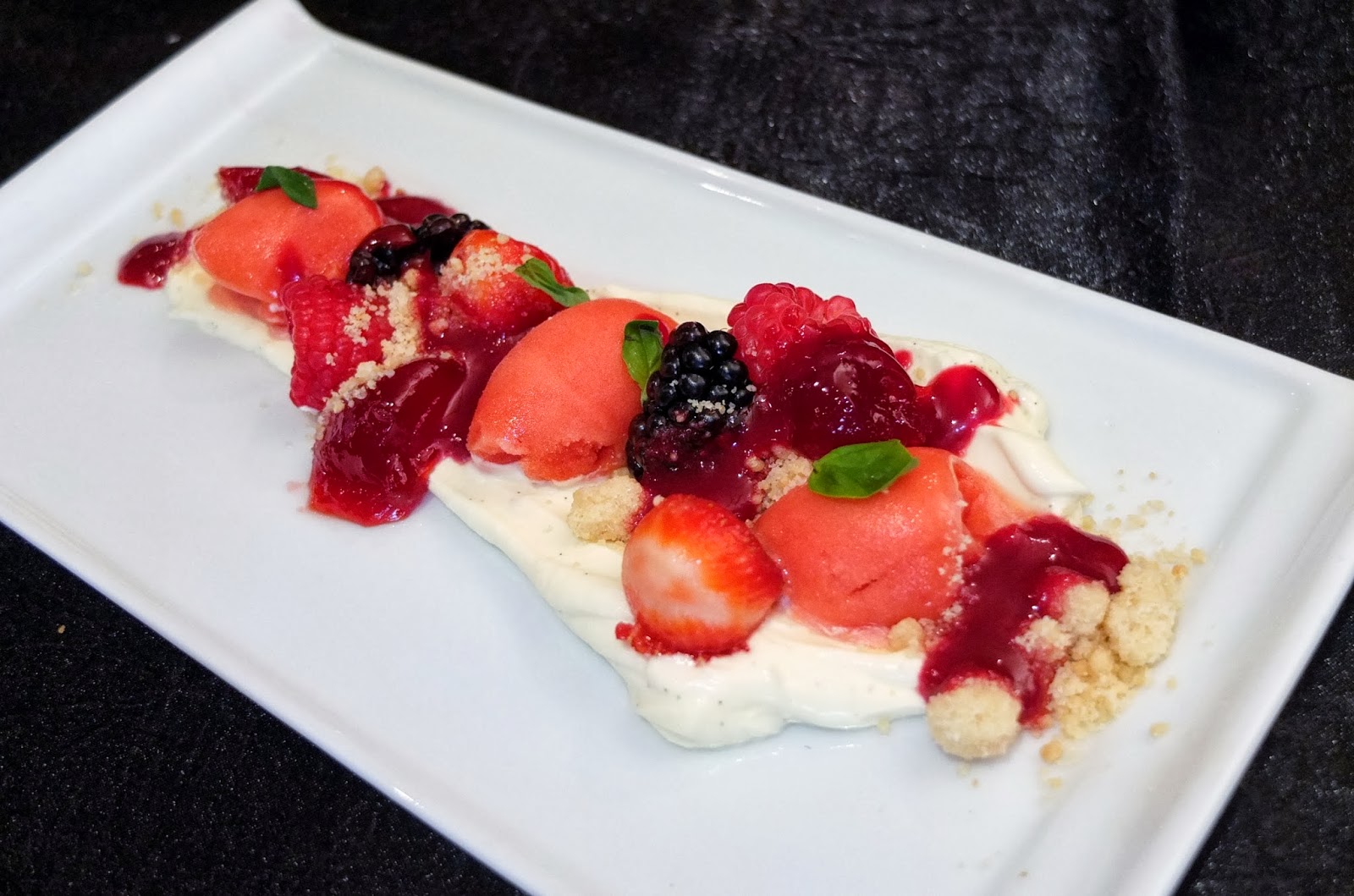 Crowning the session with a sweet flourish was a simple and oh-so-refreshing Fresh Berries with Elderflower Jelly and Raspberry Lime Sauce dessert. 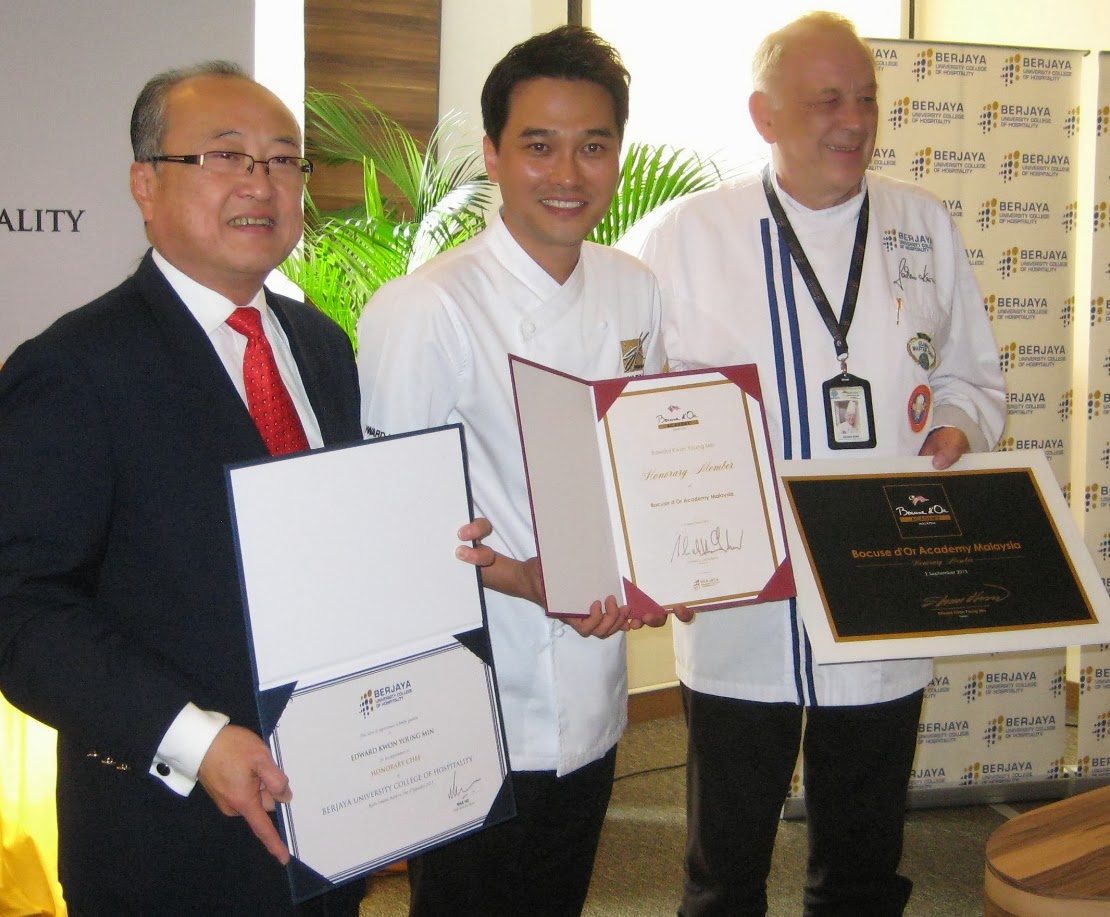 In a separate event, Korean celeb chef Edward Kwon flew in specially to receive the Award Certificate for his appointment as Honorary Chef - the first ever presented by Berjaya UCH - from Executive Director of Berjaya Corporation Bhd, Freddie Pang. 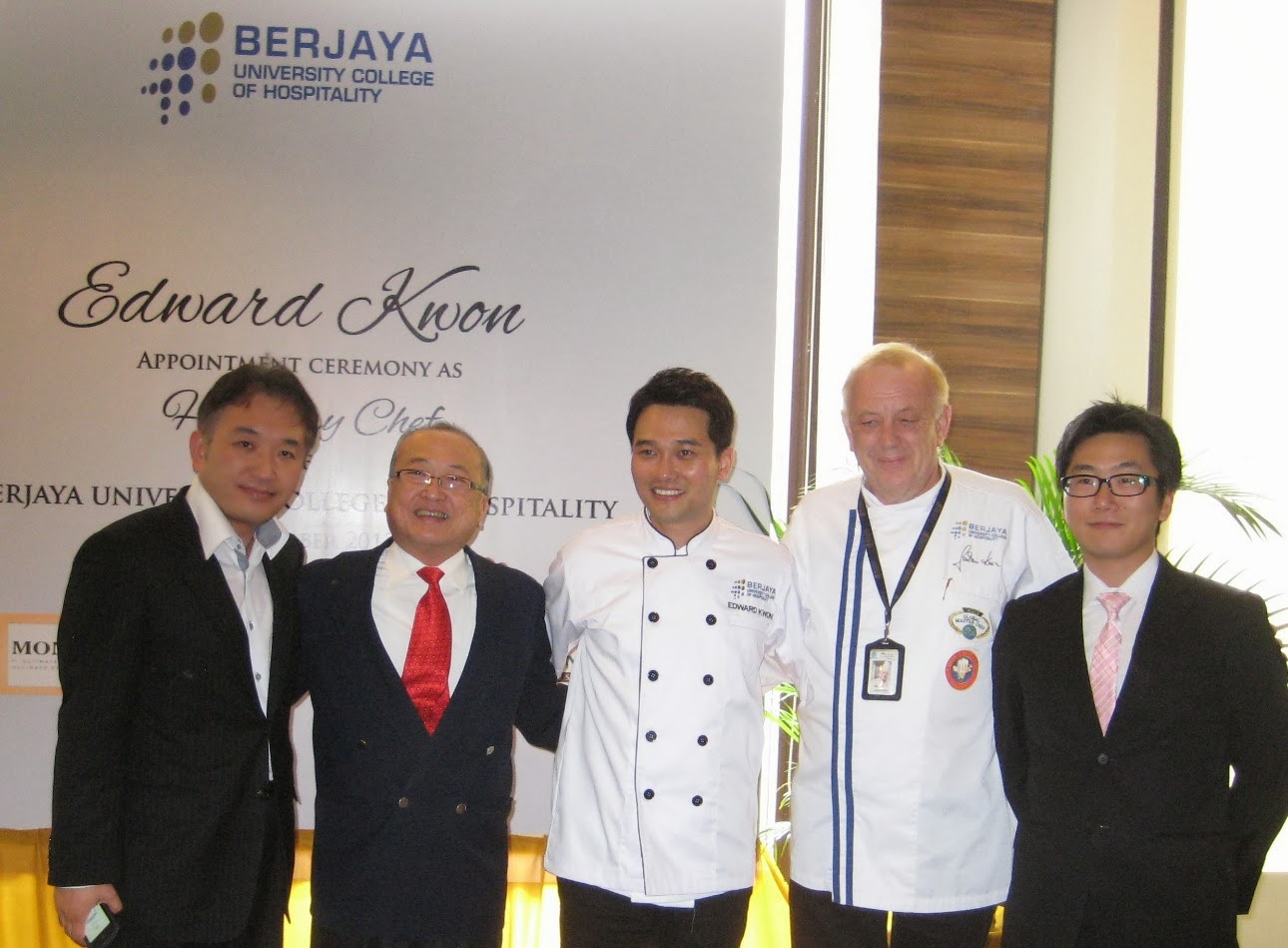 Also present to witness the event was Chung Chi-won, Consular Attaché from the Korean Embassy and representatives from the Korean Tourism Organization as well as other invited guests from the hospitality, tourism and corporate circles. 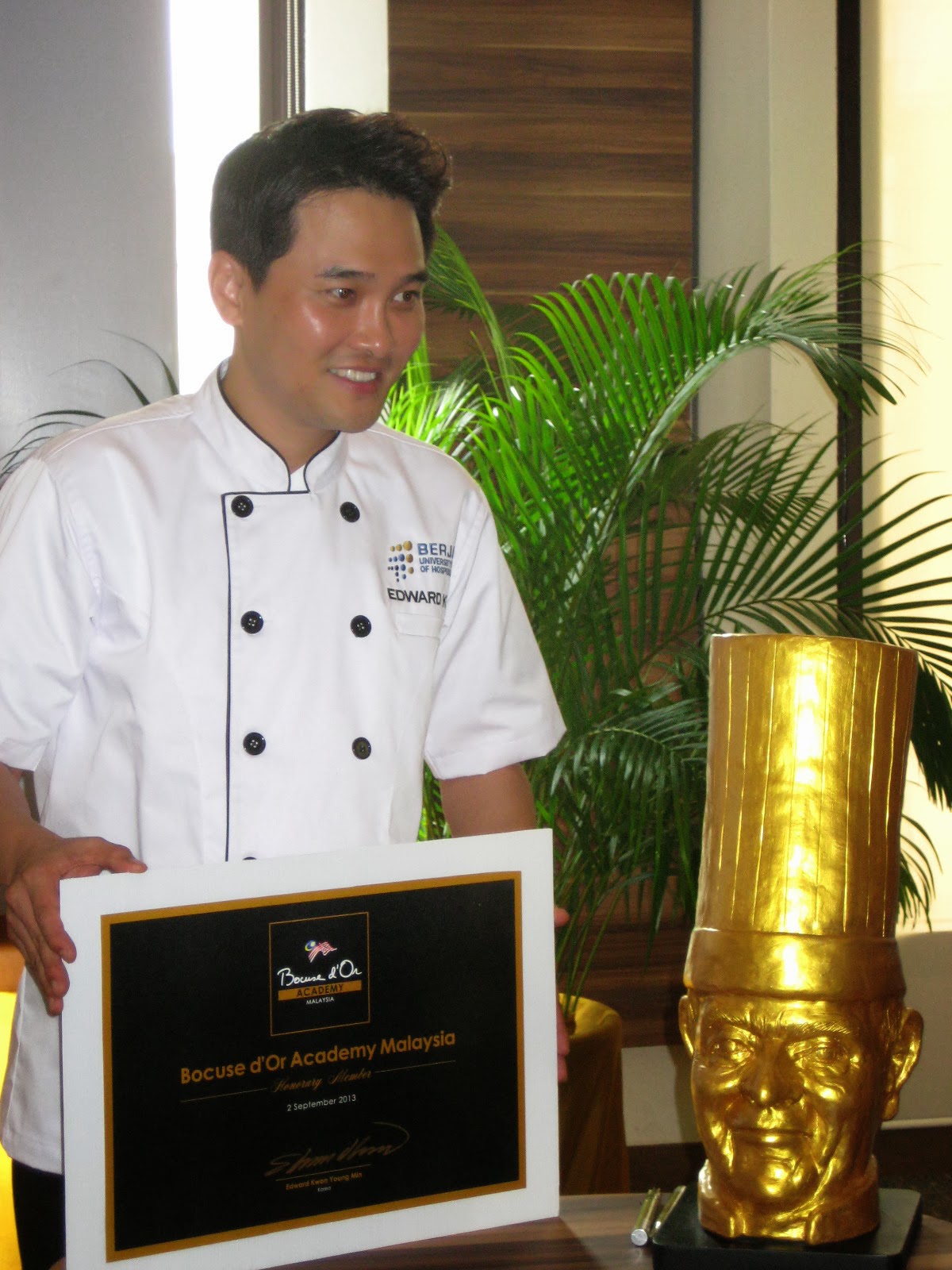 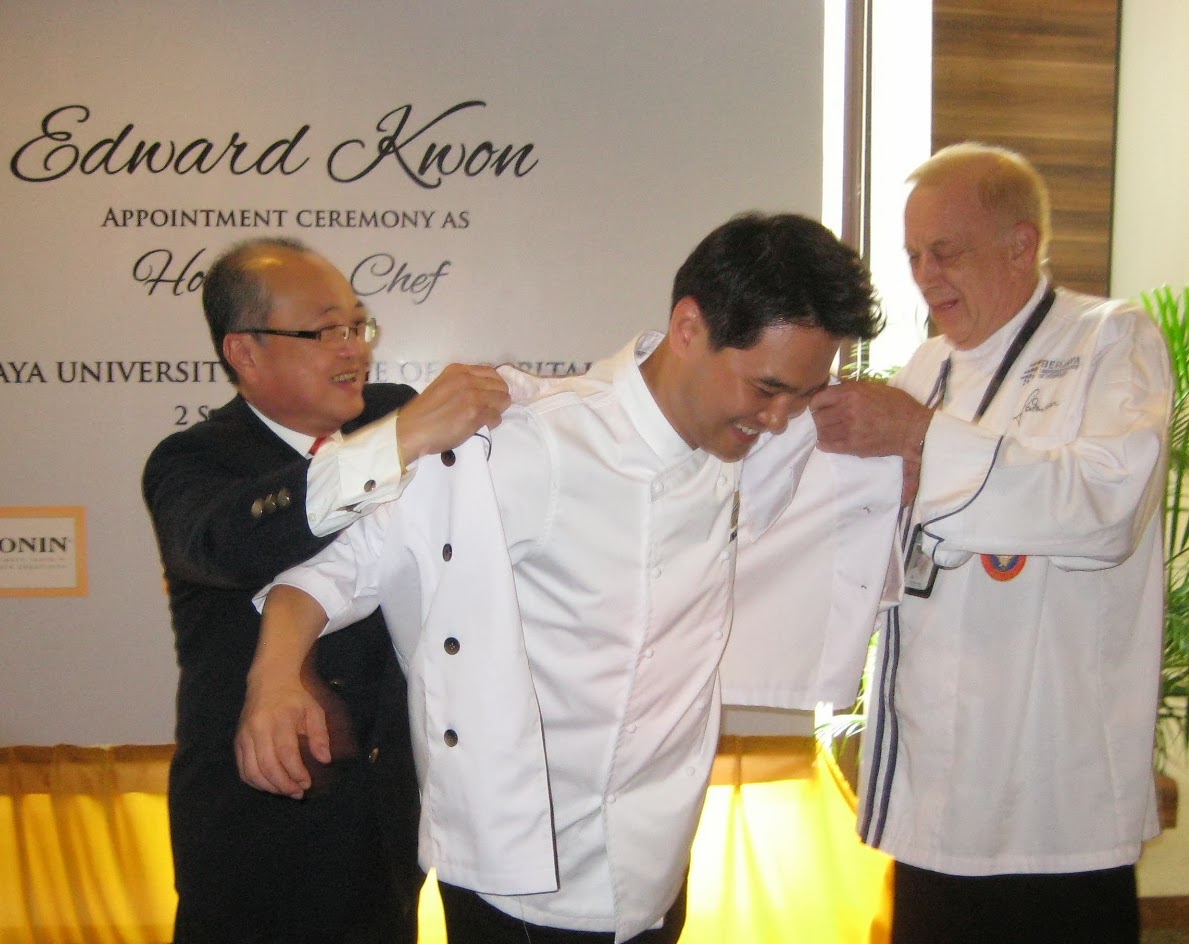 As a successful entrepreneur, Kwon is also the Executive Chef of EK Restaurants, The MIXED ONE (a Californian style family restaurant) and Eddy’s Café (a casual dining outlet). Bubbling with enthusiasm, Kwon enthused that he looks forward to share his expertise and experience in the Culinary Arts and Entrepreneurship with the Berjaya UCH community. 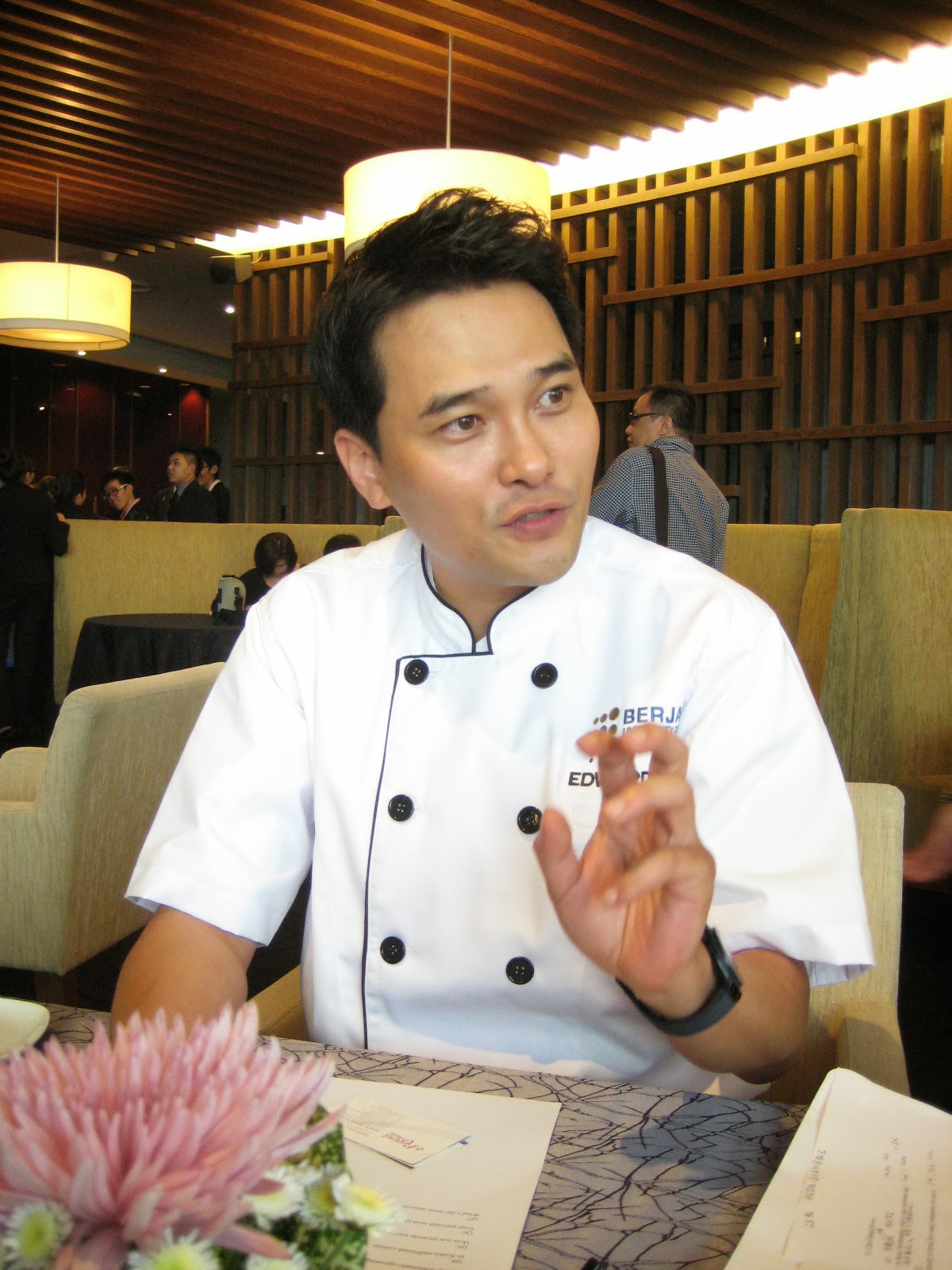 Thanks to his international experience and illustrious career, Kwon is one of the few Asian chefs who confidently deals with incessant media scrutiny on his vocation and varied business interests while lending unstinting support to guide young, aspiring chefs who want to follow in his footsteps. Devoid of airs and diva attitude, Kwon readily made time to pose for photos, speak with the local media and acknowledge his adoring fans; completely charming everyone in his wake.

Congratulations to Chef Edward Kwon for the honour - his fans and Berjaya UCH Culinary Arts students shall look forward to see hin more often in Malaysia.

For more information on Berjaya UCH, visit www.berjaya.edu.my
at November 09, 2013

@Ciki - both chefs are such darlings. Very approachable and totally cool :)