A JOURNEY OF FLAVOURS AT MARCO 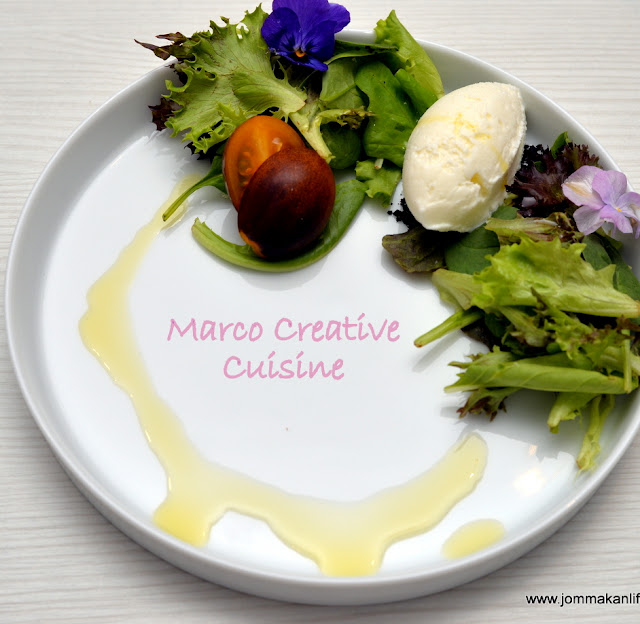 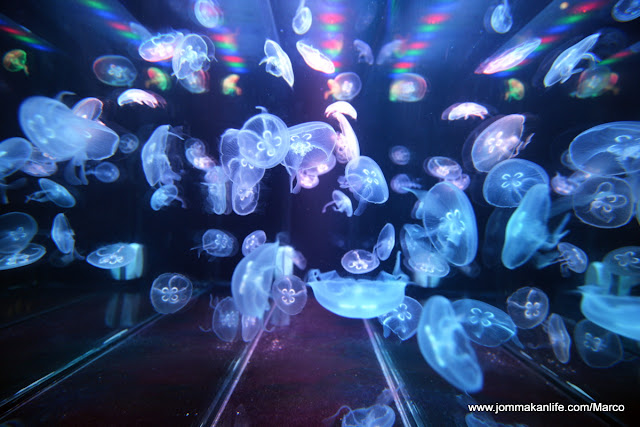 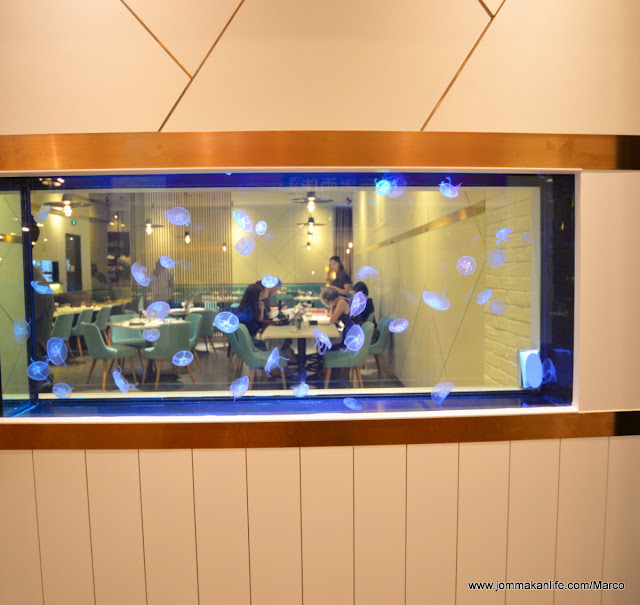 Before naysayers jump into the fray to rain on his parade, remember this plucky and enterprising chef-restaurateur has gone where eagles fear to tread. Now, instead of queuing up for Miam Miam's soufflé and thick French-toast, people are now being pulled towards Marco to gawp, zombie-like, at the translucent sea creatures floating around in the tank at the resto entrance. 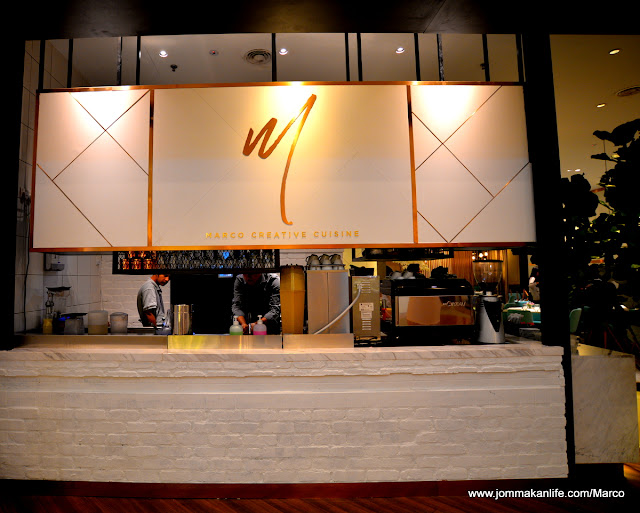 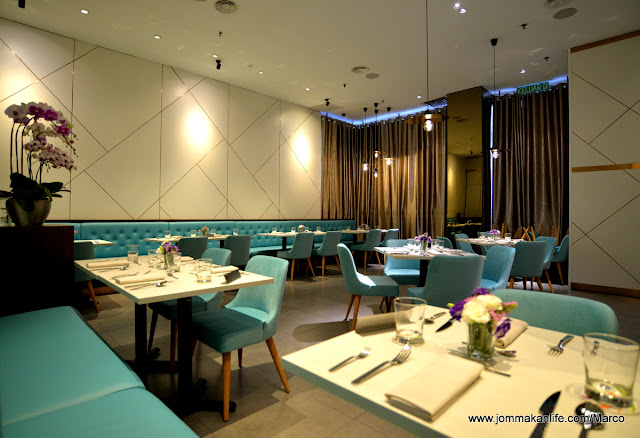 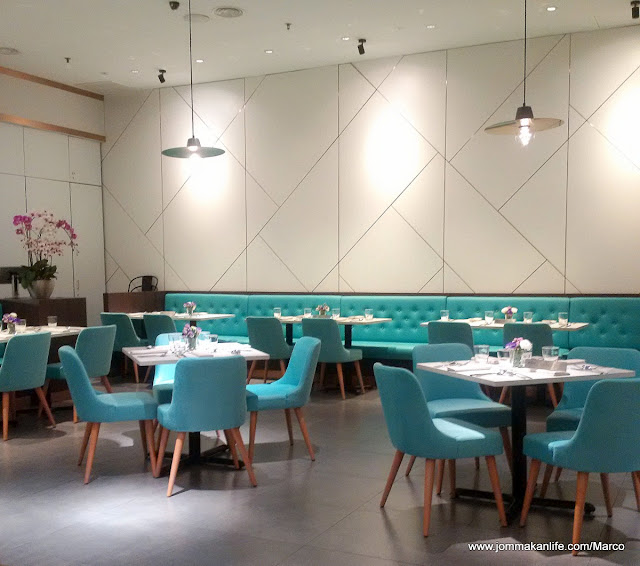 We love the modern Tiffany-blue chairs and banquette seats amidst Marco's all-white interior, discreetly crisscrossed with burnished gold trims. According to Daren, the name Marco refers to his son and also to legendary traveller Marco Polo. “Marco Creative Cuisine embodies the same sense of adventure, imbuing excitement into the culinary adventure awaiting diners at this dining outpost.” 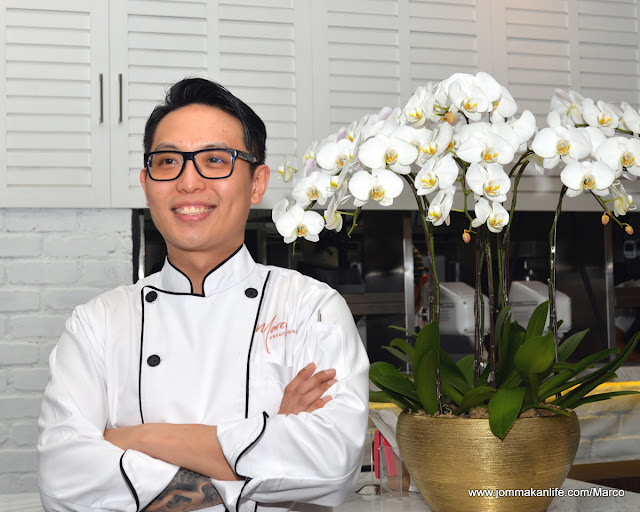 Fascinated by how memory and personal experiences influence the way we taste food, Daren invites diners to experience and discover A Journey of Flavours. Daren says each delicious creation at Marco Creative Cuisine represents a culmination of his own personal food journey. "Every dish is made from scratch using fresh, locally source ingredients as much as possible." 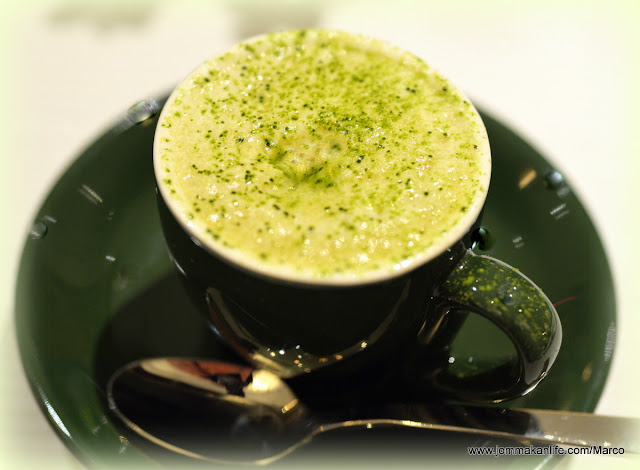 Determined to encourage local diners to try his new multi-course menu concept but minus the high price, Marco's sumptuous 7-course meal only cost RM78 (GST inclusive but not service charge) per person. Right from the get-go, his frothy palate cleanser of Velvety Matcha-Lime Shooter awakened our tastebuds to its intense yet fleeting citrusy notes. 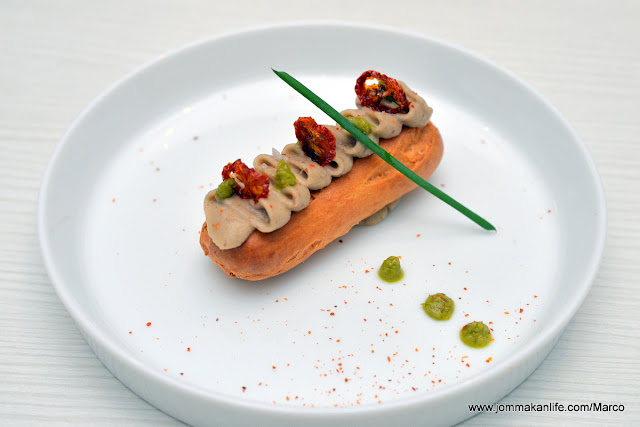 Playfully light on the palate, the dainty appetiser of Savoury Éclair won us over thanks to the crisp, airy Choux topped with squiggles of Gruyère flavoured Pâté, Aubergine Caviar, Green Chilli Pesto and Tomato Confit. The cornucopia of dense and ethereal textures interspersed with bursts of lush creaminess, zingy freshness and smoky-fruity flavours sent our expectations soaring for the other courses to come. 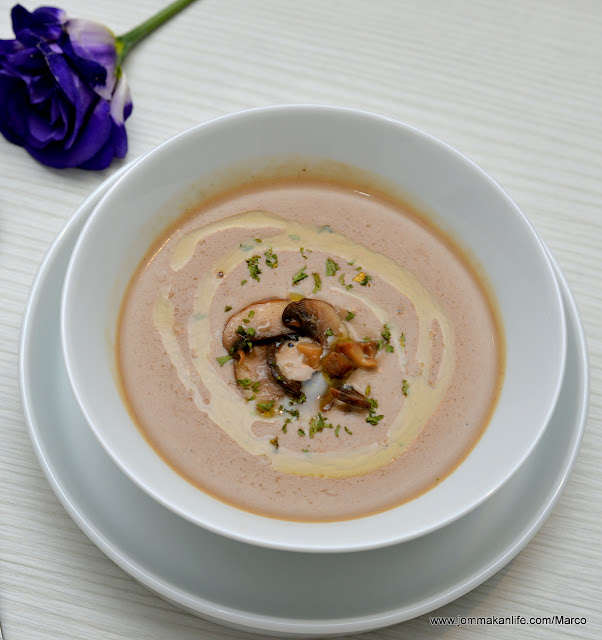 Don't let the plain Jane look of the Truffled Mushroom Soup fool you. A spoonful of it soon convinced us of its voluptuous earthiness was merely waiting to be unleashed, to flood our tastebuds with gusto. One of the show-stoppers of the night this. 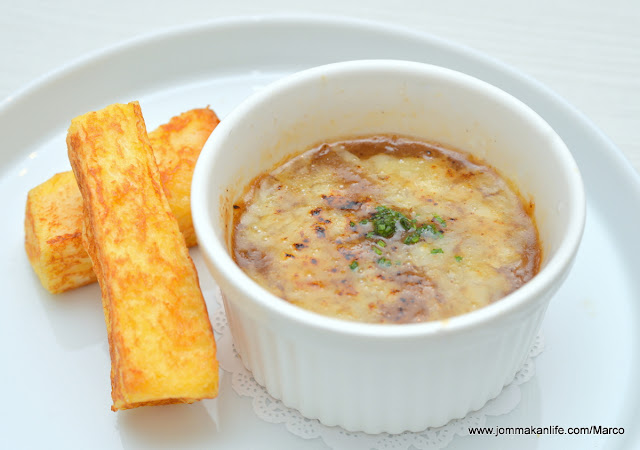 While my choice of French Onion Soup was no less flavourful, the thick broth's rusticity somehow lack the dramatic finesse of my dining partner's offering. Served with two thick-cut French toast points, we soon warmed up to the rich, caramelised yellow onion accent of the soup. 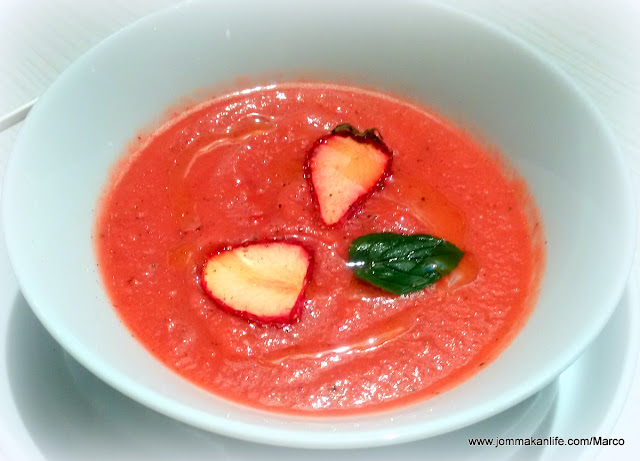 Cold soups aren't common in Malaysia but Daren feels our year-long tropical summer weather calls for a chilled broth similar to the Spanish gazpacho. Instead of tomatoes, he combines Cameron Highlands strawberries with capsicum, onion, cucumber and peppermint to create his signature Strawberry Gazpacho. The resultant pink soup was indeed light and fresh; a harmonious blend of delicate fruit and vegetal nuances. A perfect counterpoint to the dense and decadent Chicken Liver Parfait. 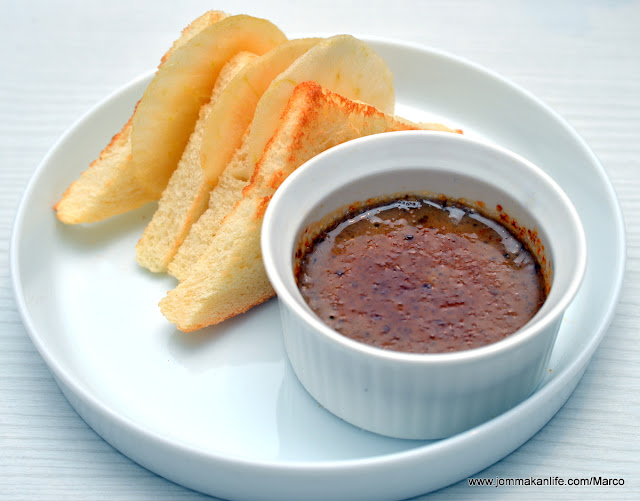 A sheath of crackly brûlée top gave the densely creamy Chicken Liver Parfait a sugary overtone. Spread onto toast triangles with dehydrated apple crisps, I personally couldn't decide if I'm for or against such savoury-sweet pairings. Apparently, this is trending right now around the world so you'd have to try it and make up your own mind. For me, the jury's still out there. 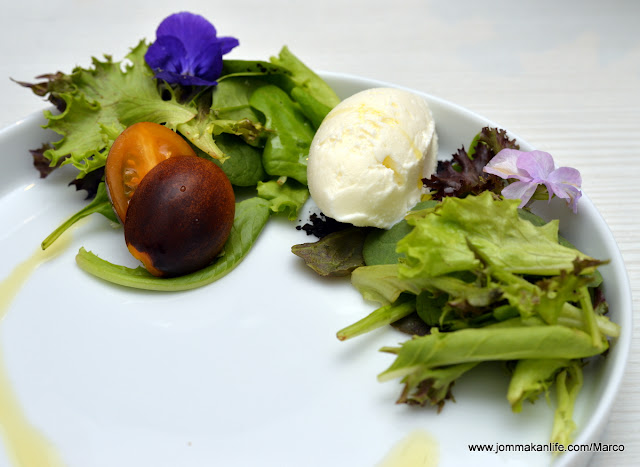 I'd rather return for the simple yet distinct entrée of Savoury Ice Cream Salad. It was like a precursor to spring, this pretty cluster of Assorted Baby Leaves, Heirloom Tomato, Seasonal Microgreens and edible Violets. A swirl of olive oil and a quenelle of sea salt-flavoured ice cream somehow managed to sync everything together. 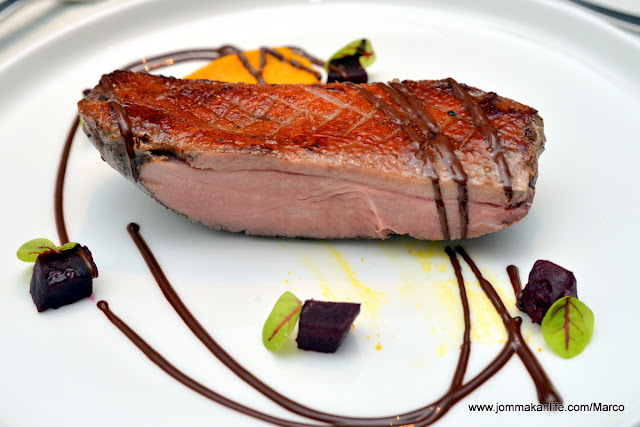 Reworked from the classic Cantonese roast duck, the chef chose to inject classical French flavours of Valrhona Dark Chocolate, Roasted Beetroot and Orange Purée to the house speciality of Duck Breast. The result yielded a captivating trinity of sour, bitter and sweet notes in the sous vide then pan-seared duck. 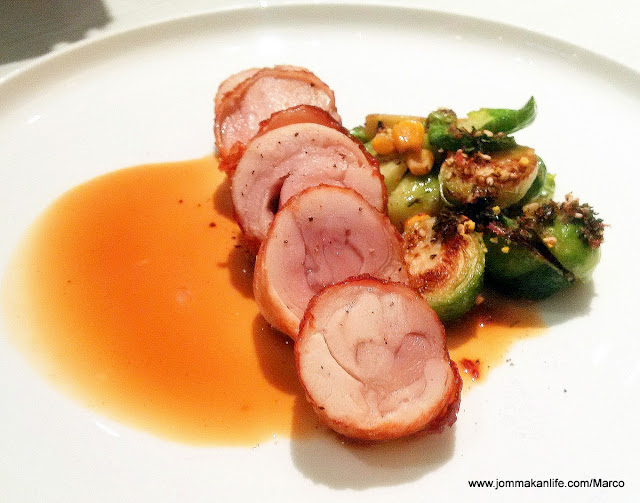 Daren paid tribute to his Hainanese grandfather's culinary legacy through his creation of Chicken Roulade with Brussels Sprouts. Fond memories of holidays spent at his grandparents' bungalow in Fraser's Hill and feasting on chicken chop, roast turkey and mince pies had been translated into a crispy skinned roulade made using juicy chicken thigh. Special mention must be made of the stellar supporting cast comprising slightly charred Brussels sprouts and sweetcorn nibs, and concentrated chicken jus. 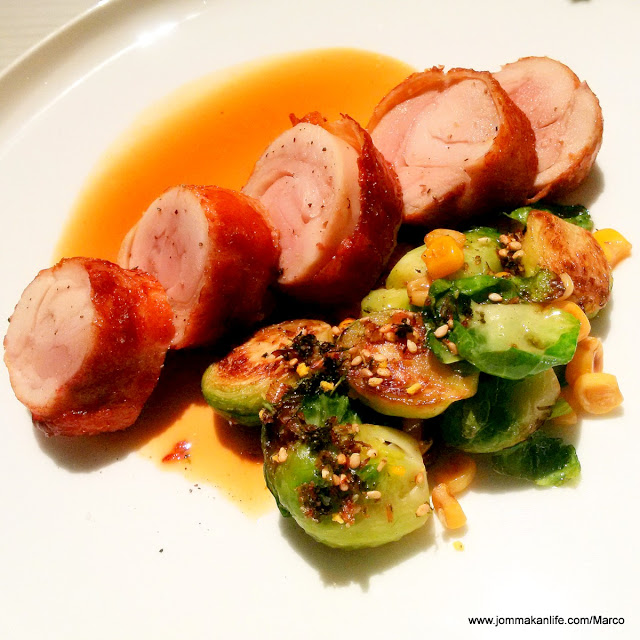 Squid ink hollandaise lent a dark, edgy tinge to the crisp yet tender-pink Salmon with Jet Black Hollandaise. Garnished with Pickled Beetroot, Green Chilli Pesto and Tobikko, this main caught our imagination and tastebuds too. 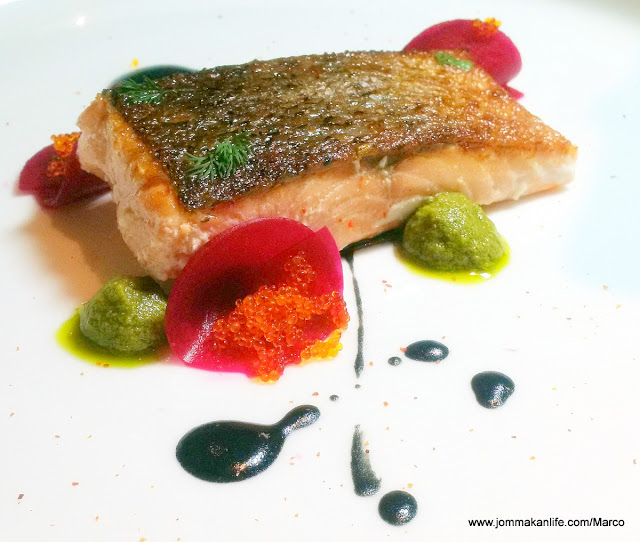 After the slew of inventive offerings, we found the Pomodoro Cream Seafood Pasta far too stoic and stodgy. Was this dish of penne with baby squid, clams and mussels a throwback to the chef's Miam Miam days or included as a pragmatic kid-friendly option? 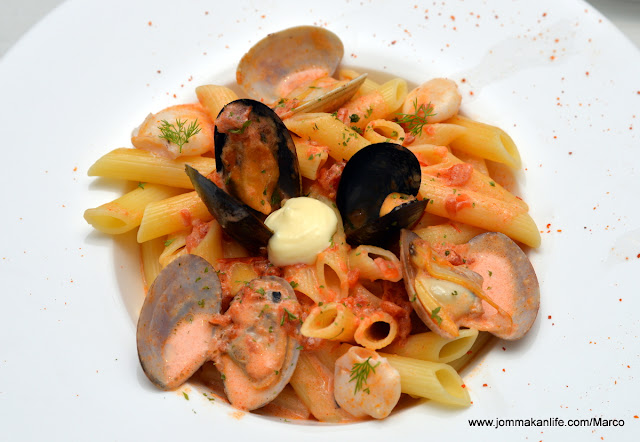 Like a child in a candy store, I derived great delight from my Deconstructed Lemon Meringue Pie. It reminded me of world-renowned Chef Alvin Leung's crazy dessert in a good way once I savoured the yummy Lemon Curd with Italian Meringue. Dots of Passion Fruit Gel, a quenelle of White Chocolate Sherbet and some buttery pastry 'soil' heightened the palate-pleasing experience. 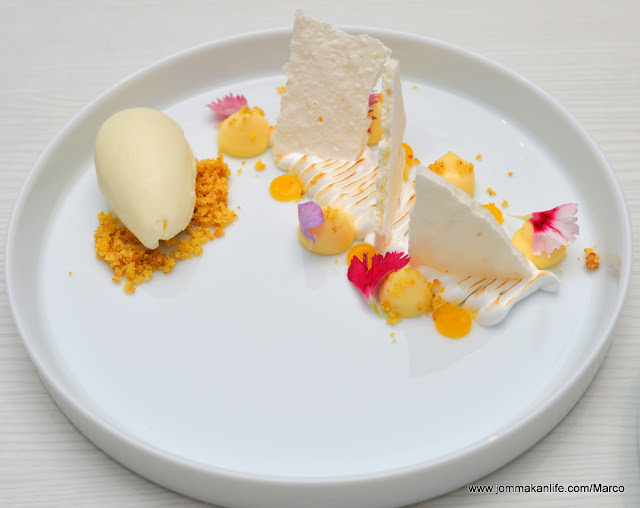 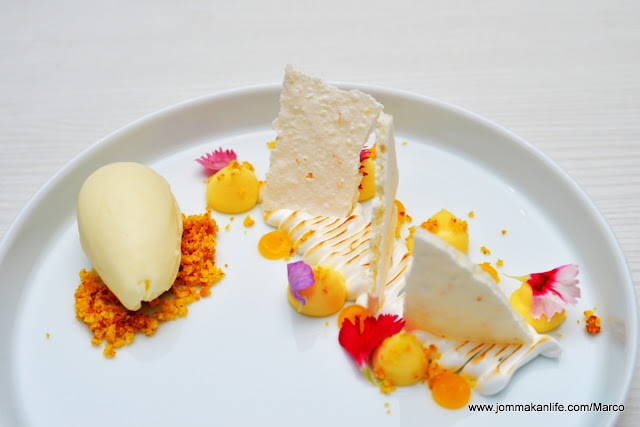 The much-touted Raspberry Decadence came in a close second. It was a prettily plated dessert with the winsome pink Raspberry Cheesecake taking centrestage. Accompanied by Lemon Meringue Kisses and Passionfruit Gel, it was as close as you'd get to a guilt-free finale. 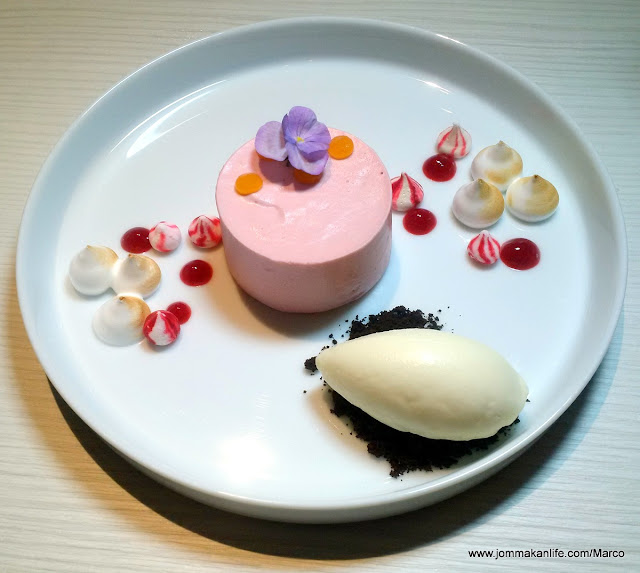 Spoiled by all that earlier razzmatazz, it was almost discomfiting to find something as mundane as Crème Brûlée with White Chocolate Sherbet in the menu. Still, I suppose some diners like to find comfort from the tried and tested egg custard baked with a caramelised top. 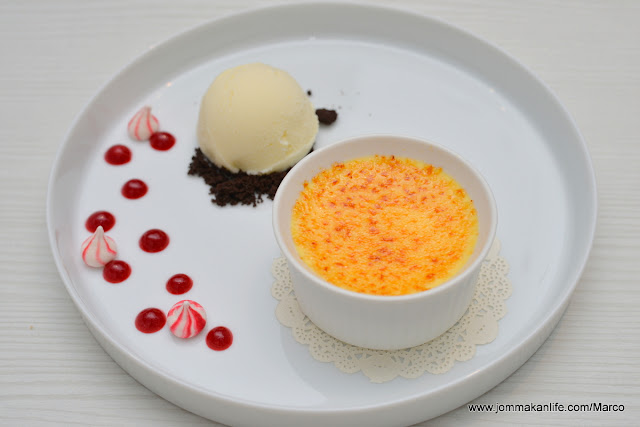 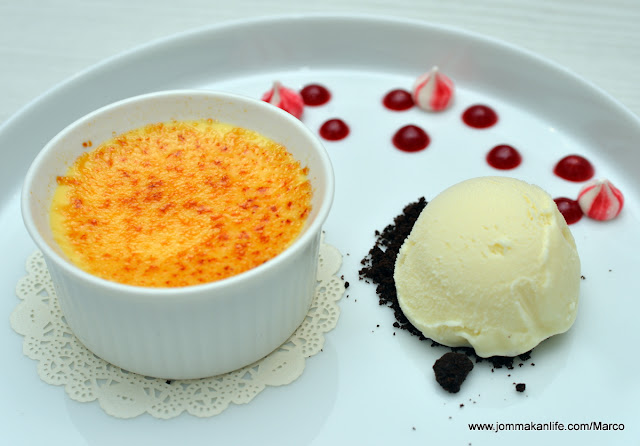 A choice of French Press Coffee, Loose Leaves Tea or Sparkling Iced Berry Drink concluded our culinary journey. Do take note the list of dishes reviewed here went beyond seven courses as our dining party of six shared and sampled each other's selection of courses throughout.

A La Carte orders available with Soup/Entrée at RM18+ per serving, Main at RM35+ per serving (add RM10+ for Duck Breast) and Dessert at RM20+ per serving. Lunch is served from 12 noon to 3 pm while Dinner is from 6pm to 10pm daily.

hmmmm quite a casual dining rather than fine-fine :) but good option if i feel like having a 7-course meal without burning the pocket

@Fish.ohFISHiee yeah, great value for the work involved in creating the 7-course meal.

@Choi Yen I agree totally. Can't wait to return & try the other dishes.