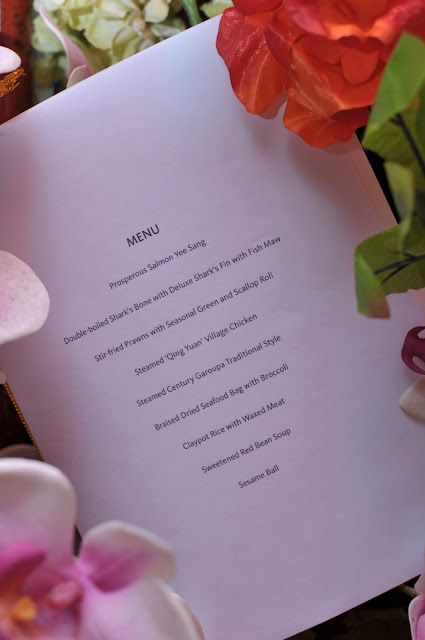 Chef Yong must be fishing for compliments while all of us were fervently fishing for prosperity. With salmon trout Yee Sang, shark's bone soup and loong da'an (giant garoupa) on the menu, here's hoping the coming Lunar New Year will herald all things fortuitous to our doorsteps.


Dinner naturally commenced on a rousing note as we toss, stir and mix the colourful platter of raw fish salad amidst an endless slew of good wishes, laughter and proverbial sayings.


According to the chef, he has opted to stick to fresh, natural ingredients such as more fruits and vegetables this year to make up the rainbow salad platter. I particularly like the inclusion of puffy rice cracker bits, olive oil and strawberry-based sauce that lighten up the whole combo. 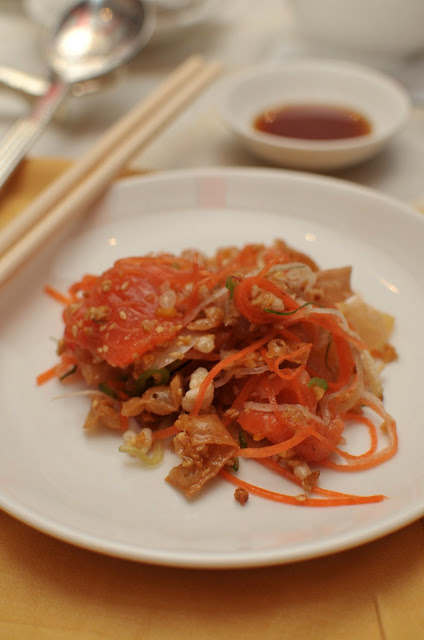 The slightly unctuous Double Boiled Shark's Bone Soup with Deluxe Shark's Fin and Fish Maw appeared almost creamy on the palate thanks to the collagen-rich, cartilage-based broth. I lapped up every single drop of the sweet soup (thumbs up to the peppery overtone!) while devouring the spongy fish maw and fine comb of shark's fin. Some beansprouts and Chinese parsley are served on the side for those who want to mix these in for a 'fresher' flavour and some crunch. 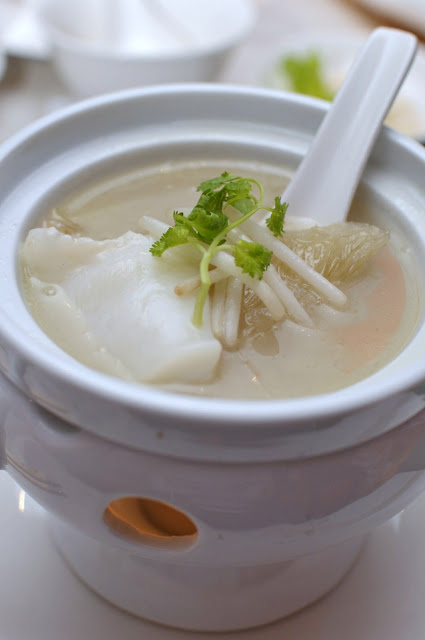 Stir-fried Prawn with Seasonal Green (asparagus, macadamia and fresh magnolia petals) and Scallop Roll left us gushing like starry-eyed groupies. Springy and succulent to the bite, the sizeable crustacean's crystal-clear sweetness is a joy to savour. Cocooned in crispy threads of kataifi pastry, the scallop provided some textural contrast though its inherent taste was a tad overwhelmed by its wrapping and the accompanying dollop of ebikko-studded mayo cream. 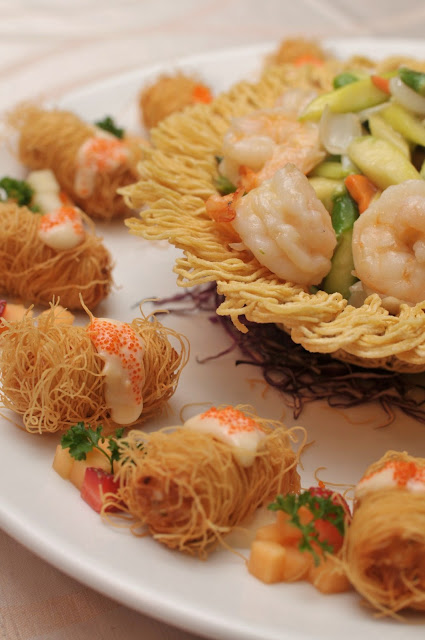 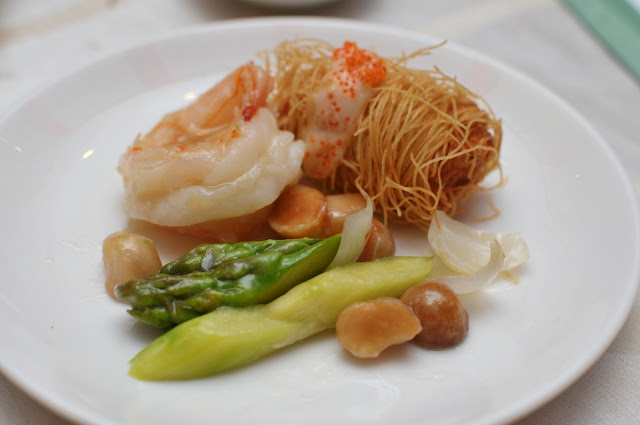 Chef Yong paid tribute to the tradition of having steamed chicken on the festive table with his version of Steamed Qing Yuan Village Chicken. The chicken is not your average battery-farmed fowl but a free-range bird raised on oats, breadcrumbs, corn and other grains resulting in its firmer textured meat with a nice yellow-hued, fat-free skin. Instead of just plain salt, the chef also immersed it into a pot of herbal-infused broth, to bestow the chicken with delicate herbal accents. 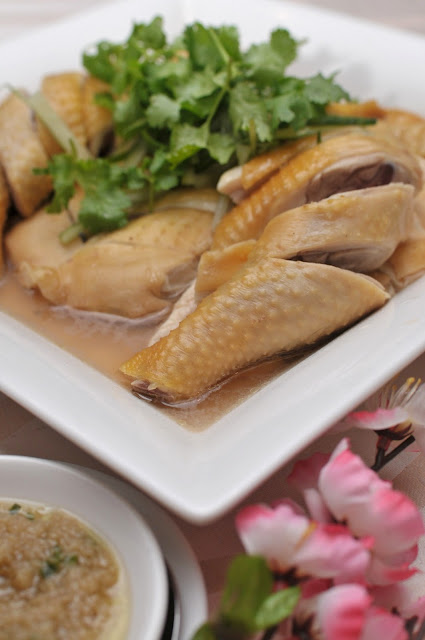 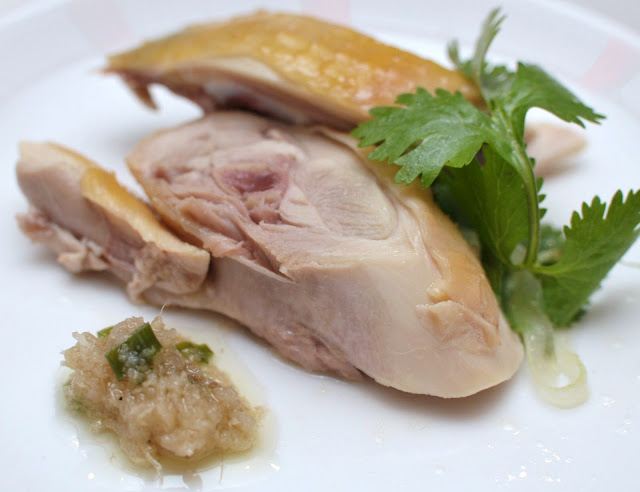 Another customary turn that he showcased was the Steamed Century Garoupa Traditional-Style. There was some debate over the type of fish until we were told it was 'loong da'an' which is also known as dragon or giant grouper. The flesh was thick and meaty with muted sweetness to it. What really stood out was the soya sauce that had hints of dried orange peel and ginger in it. 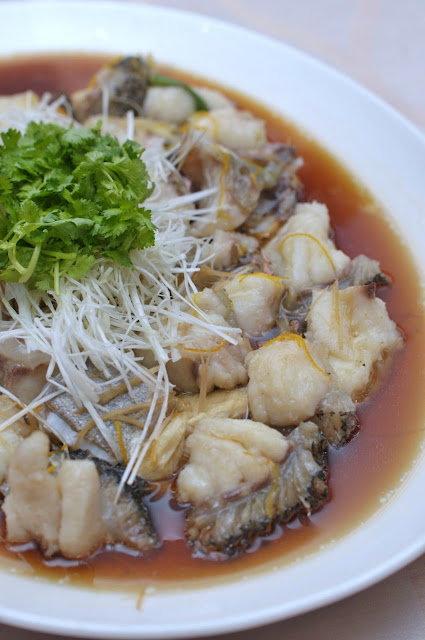 I must admit the Braised Dried Seafood Bag with Broccoli was a non-event for me. I found the combination of sea cucumber with dried oyster stuffed into an inari pouch (Japanese sweet beancurd skin) too insipid for my liking. However, the combination of textures proved to be unforgettable. 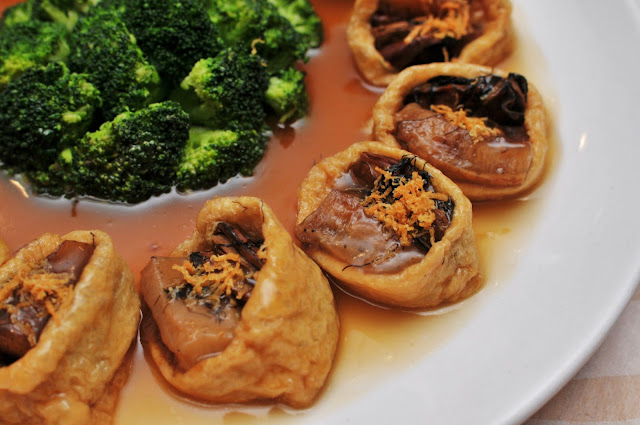 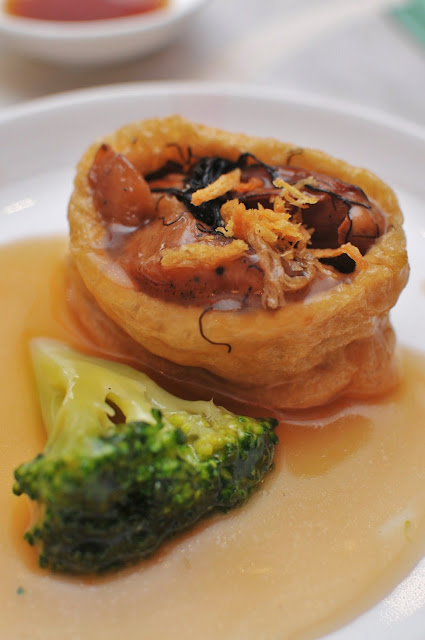 Most CNY meal is never complete without a serving of Claypot Rice with Waxed Meat. Although we were satiated by now, we gamely cleaned up our bowl of fragrant rice especially the complementing slices of winey Chinese liver sausages. 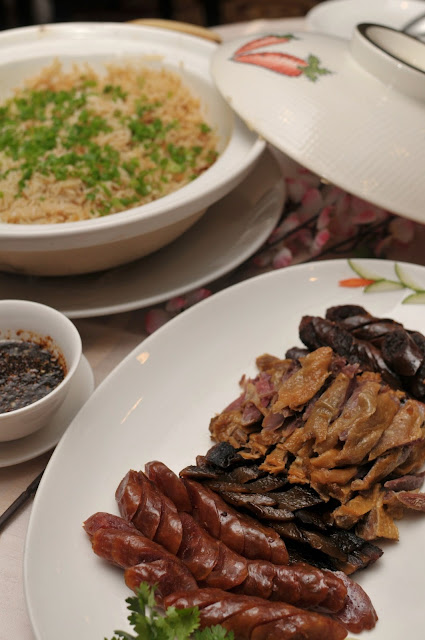 Sweetened Red Bean Soup with Sesame Balls sounded very pedestrian but the twist came in the glutinous rice ball filling. Instead of the usual lotus paste, the black&white sesame seed-coated balls are stuffed with crushed peanuts and sesame seeds. 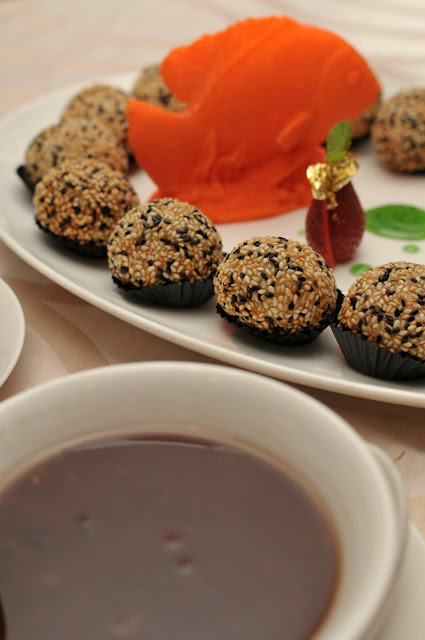 Ee Cuisine's six varieties of Yee Sang and three set menus are available until 6 February 2012. Make haste for the restaurant is already fully booked for the eve of CNY and is expected to do roaring business for the entire CNY celebratory period.

I really to proud to say your blog go to peak. I always welcomed your blog. By Regards Door Hangers

Certainly a lovely feast to indulge on... :0)

Xin Nian Kuai Le from my family to yours... May the year of the dragon bring you much happiness, prosperity and good health!