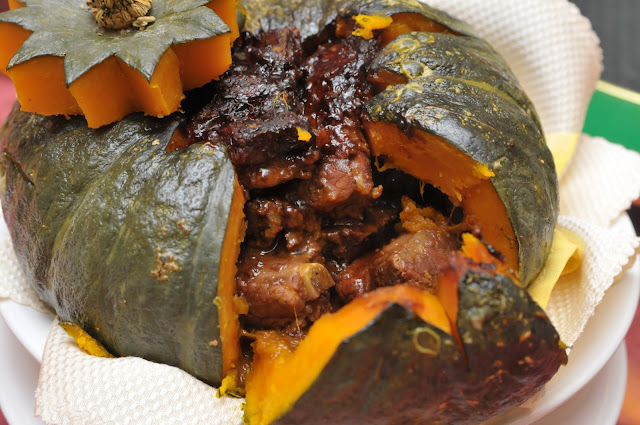 A Japanese pumpkin hogged the limelight at Extra Super Tanker's unveiling of its latest selection of chef's specialities recently. Chef Chin or better known as Wah Kor (Brother Wah) to customers had this brilliant brainwave of baking a whole Japanese pumpkin filled with several meaty pork ribs braised in Chinese wine mash in it. Needless to say, the resultant outcome was phenomenal. 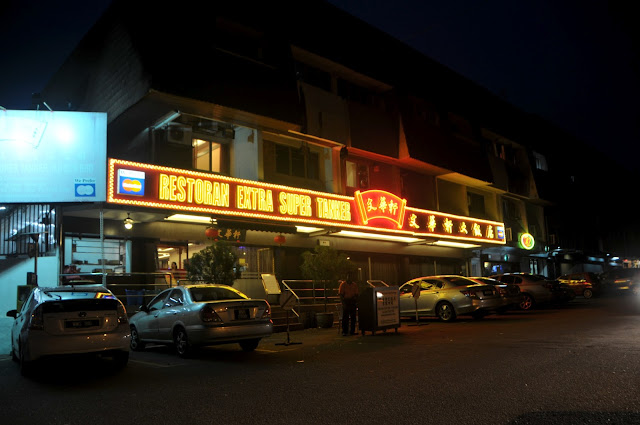 After nine years, this neighbourhood Chinese restaurant still reels them in - an admirable feat considering how fickle and cut-throat the restaurant scene is in the Klang Valley. Its unique name stems from the now-defunct Super Tanker restaurant in Penang, one which the resident chef admired greatly.

Back to the business of eating at hand, the Braised Pork Ribs in Japanese Pumpkin (RM40 per serving of 6 ribs) had this intense melding of flavours - the pork's sweet, flabby richness with that of the pumpkin's smoky-caramelised sweetness that saw us devouring everything, pumpkin skin and all. 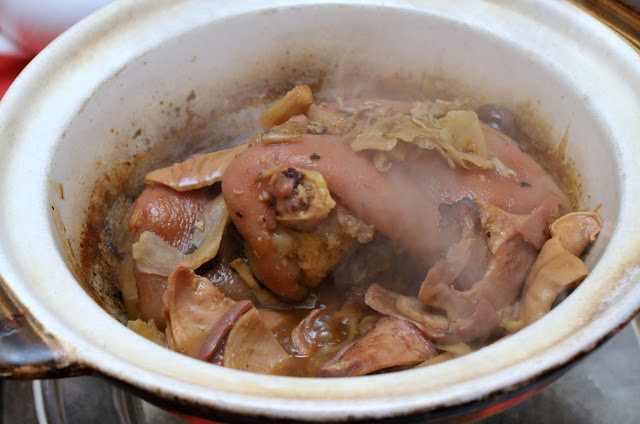 Our 'pork-toberfest' then continued with Braised Pork Knuckle and Pig's Stomach with Chinese Herbs (RM50) – a rustic, hearty offering inspired by the perennial local favourite of bak kut teh (pork ribs in Chinese herbal broth). The melt-in-the-mouth tender chunks of fatty pork were edged with toothsome bits of cartilage with springy-chewy pieces of stomach richly imbued with that unmistakably woody, herbal nuances of the Chinese herbs thrown into the mixture. Every morsel was sinfully good! 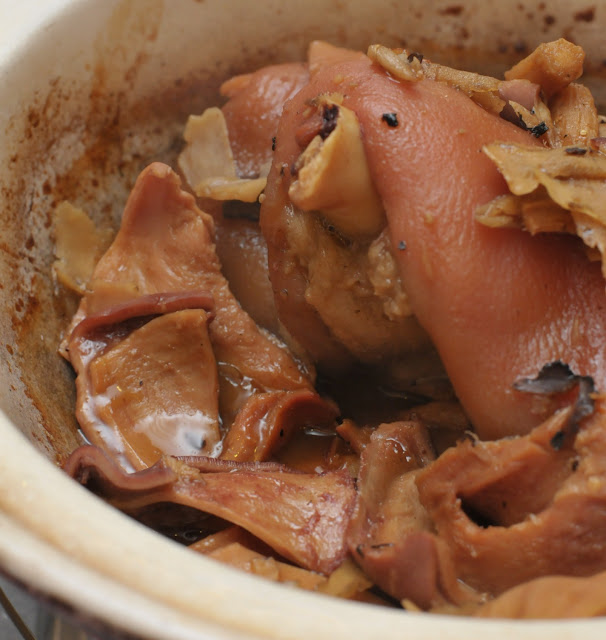 According to Vincent Lam (one of the eatery's co-owners), Wah Kor who is as old school as chefs come and takes great pride in making everything from scratch. That's why advance order is required for the new selection of dishes as the chef who's a stickler for perfection insists these specialities should be made to order. 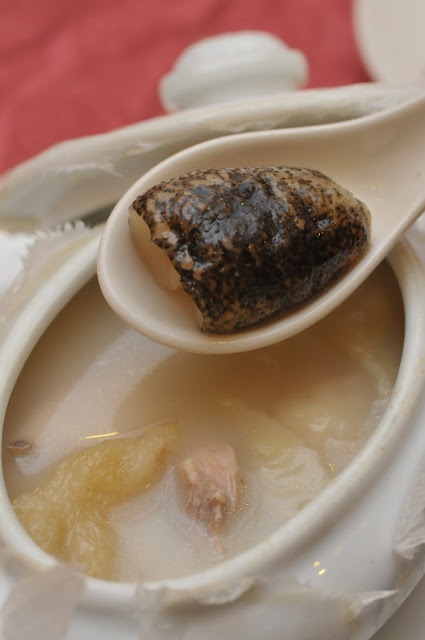 Earlier a rich seafood soup simply known as Sei Poh (Four Treasures, RM25 per person) already had us well and truly hooked once we savoured the first spoonful. Waves of contentment washed over us as we succumbed to the seductive lure of a succulent wantan dumpling, spongy fish maw and blubber, bouncy sea cucumber, a whole dried scallop and chucks of chicken that lent depths of oceanic sweetness and textural interests to the milky white broth. 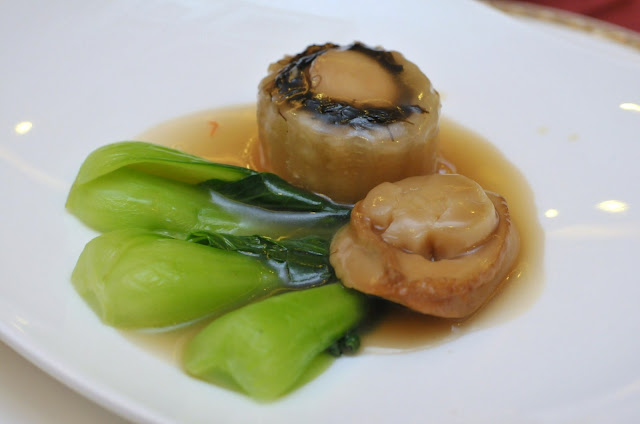 The chef's ingenuity was aptly displayed in the signature dish of Kong Nam Kum Ngan Pau (Jiangnan Gold & Silver Pouch, RM38). Instead of presenting the whole abalone as it is, he carved out its centre and stuffed a whole dried scallop in its place. The abalone centrepiece together with some fatt choi (black sea moss) in turn filled the centre of a braised gourd ring. Soused in some velvety, full-bodied braising sauce complemented by plump baby bok choi, this exquisite offering proved to be another sail away success.

Forget about the requisite steamed fish with soya sauce when you're dining here. We highly recommend the Yin Yeong Loong Fu Parn (Hybrid Dragon-Tiger Grouper in Two Styles, RM19.80 per 100g) to pique your interest. 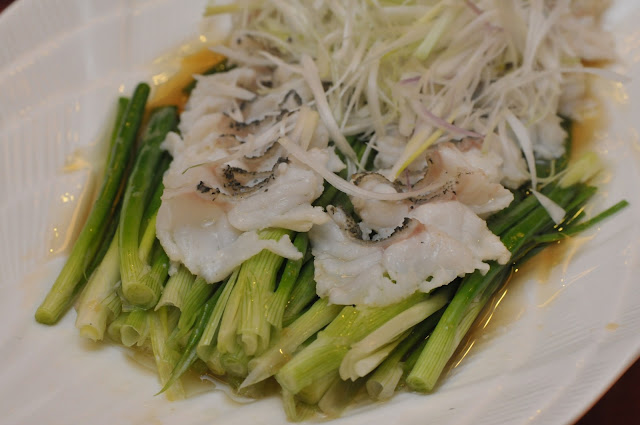 Sliced thinly, the fleshier parts of the fish are doused in hot oil to cook them gently. Served on a bed of jade-green spring onion cooked in a similar way, the fish tasted amazingly sweet and smooth, a perfect match that went splendidly with the punchy sharpness of the spring onions. 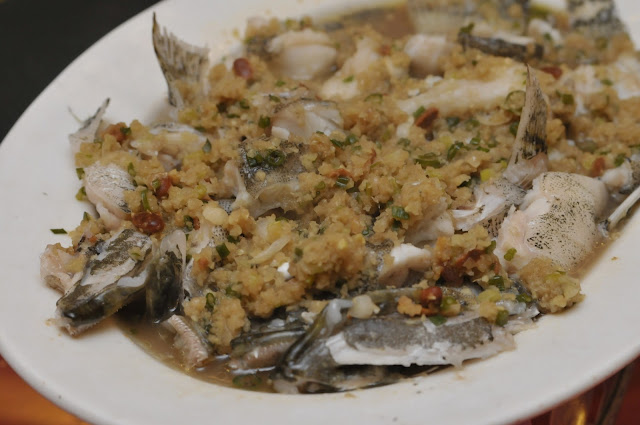 The remaining parts: head, tail, fins and bones were then steamed with grated ginger, superior soya sauce, tau soh (Teochew preserved soya beans) and some cili padi. How we raved over the complex  spicy, briny and sweet overtones that left us hankering for more. 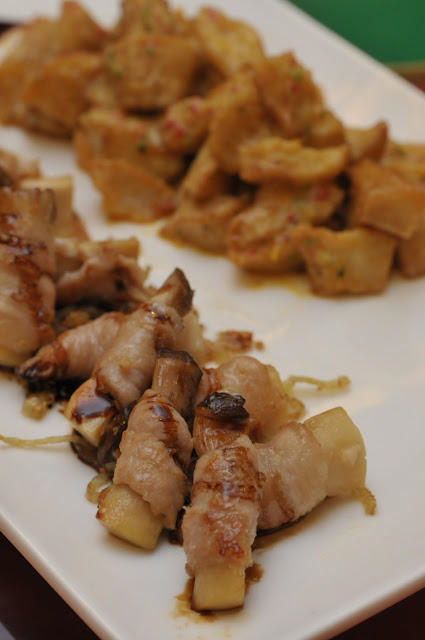 Just when we thought the bar couldn't be raised any higher, the chef proved us wrong with his Yi Sek Kai Pei Koo (Two-Way Eringi Mushroom RM25-small, RM60-large). Presented on a bed of caramelised sliced onion, the fungi's soft, spongy caps came wrapped up in thin slices of pork shoulder meat while the sturdier stems were stir-fried and crusted with salted egg yolk. Needless to say, we made short work of these delicious morsels in just a heartbeat! 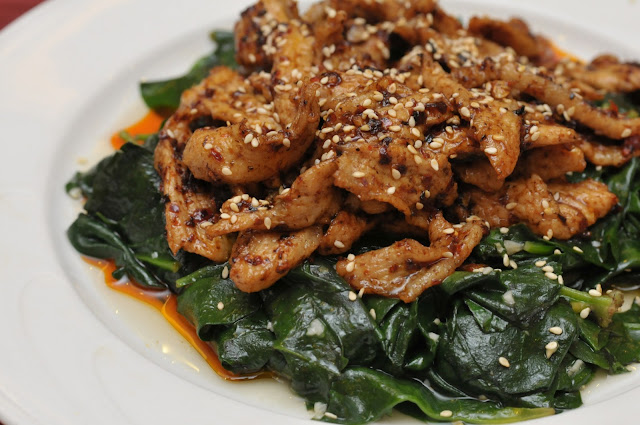 Fuelled by our unabashed porky enthusiasm, Vincent asked Wah Kor to whip up Tin Cha'at with Pork Neck Slices (RM25-small, RM35-medium, RM50-large) for us to sample. Grown in abundant on Bukit Tinggi, this waxy vegetable are stir-fried with thin slivers of pork neck meat in a punchy fiery-hot sauce that tempered the leaves' grassiness and the pork's fatty accent. Again we wiped our plate clean within minutes. 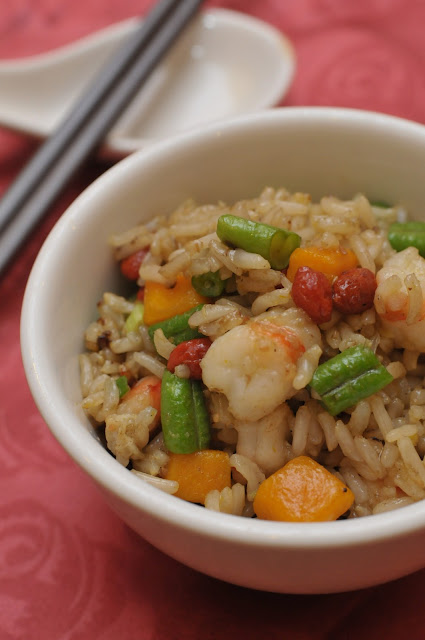 We were so satiated by the time the Fried Brown Rice with Wolfberries and Pumpkin (RM25 - small, RM35 - large) appeared that all we could manage was a small bowl each. But it was certainly an impressive dish; we love the nuttiness of the brown rice and the delicate sweetness of the attendant ingredients. 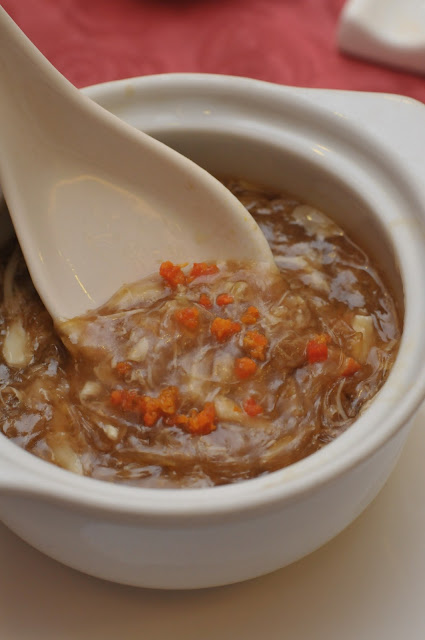 Thank you Chris Wan aka PureGlutton for the unexpectedly sumptuous treat and an entertaining evening!

Reading through this post reminds me again of those super-delish dishes we had and I can't wait to go back for more...soon!
It's such an awesome dinner, hoh?

@Pureglutton - mou tak teng! I plan to return to try the other signature dishes...the old faves that you all keep raving about!

Your photography sucks. Exposure is different for every photo and is underexposed. The fish sea cucumber in the spoon is out of focus. Having an SLR does not make you a photographer.

Wow so much hate for a coward who doesn't dare to leave an actual name...

I have NEVER claimed to be a photographer and I don't own a SLR camera! These photos are for my own records and viewing pleasure.

Why let the green-eyed monster get the better of you?