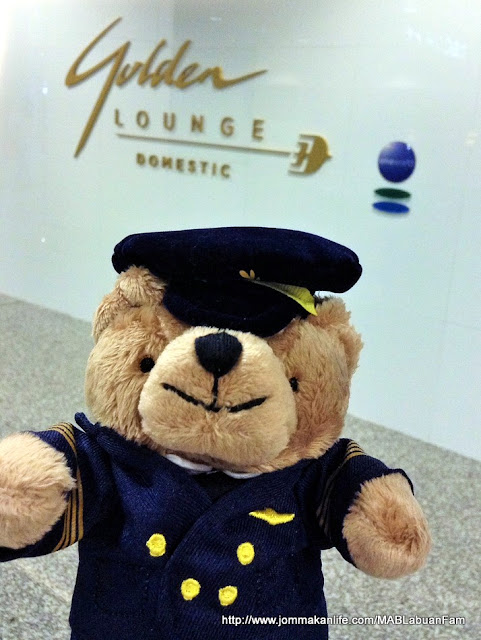 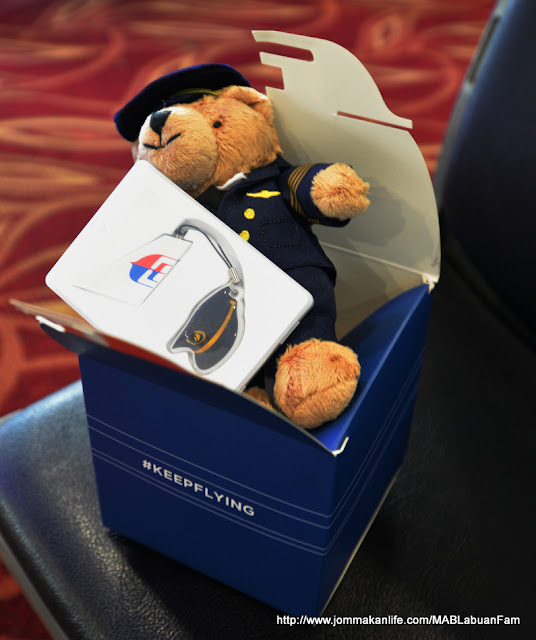 Meet Pilot Parker, the cutie mascot for Malaysia Airlines Berhad (MAB) who popped out of a surprise gift box given to me and my blogger friends recently. We were invited on a familiarisation visit to the Federal Territory of Labuan by Dorsett Hotels & Resorts so all of us were eagerly looking forward to the staycation. 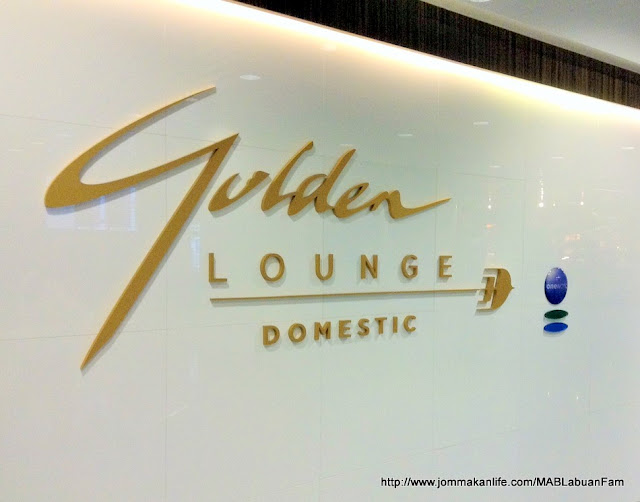 Thanks to the generosity of MAB, our group were accorded the rare privilege to experience the hospitable comfort of MAB's Golden Lounge in the Domestic departure area at KL International Airport prior to our morning flight. 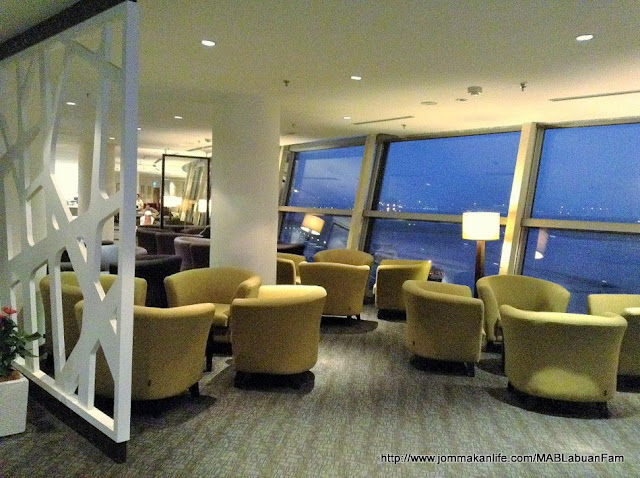 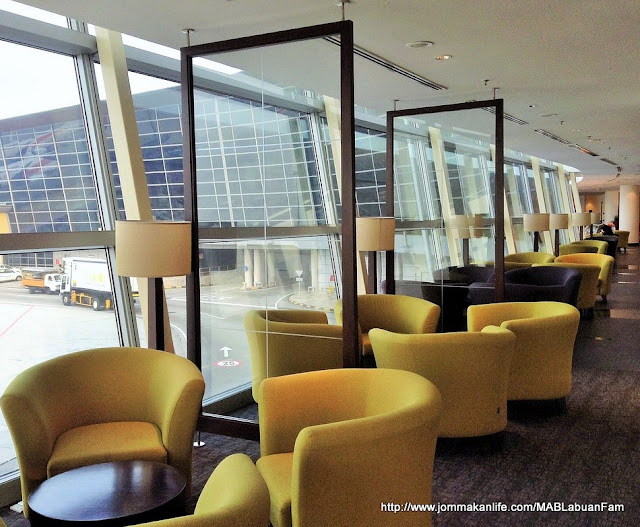 As you can see, the spacious lounge was cosily furnished with comfy armchairs and also dining tables for MAB travellers to relax in. Its warm ambient lighting and floor-to-ceiling picture windows put us at ease the minute we set foot in there. 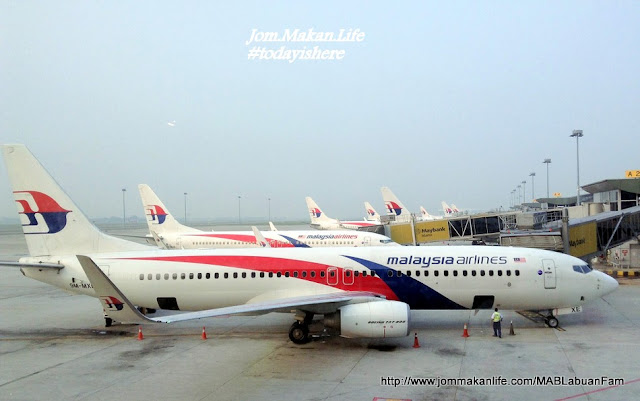 From the lounge, we could look out to the fleet of MAB planes which traverse the world. Just the sight of the red & blue livery and wau insignia are enough to make us Malaysians feel proud. Coupled with the charming crew on board to look after us, MAB would remain most Malaysians including moi preferred airline when ever they travel. 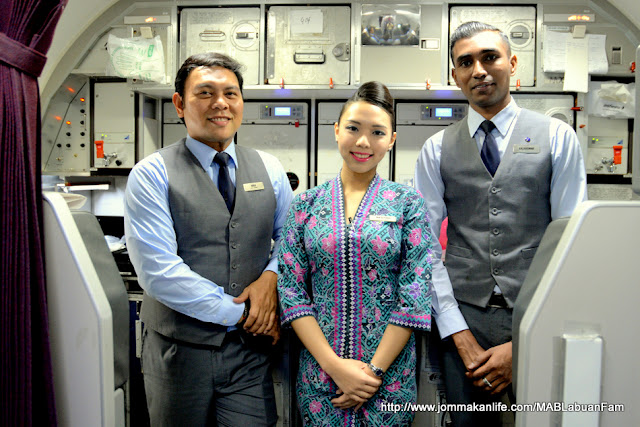 Yes, MAB has gone through some turbulent times recently but all the more reason us Malaysians should come out in full force to support MAB and the people working for the company. #Keepflying #MalaysiaAirlines! 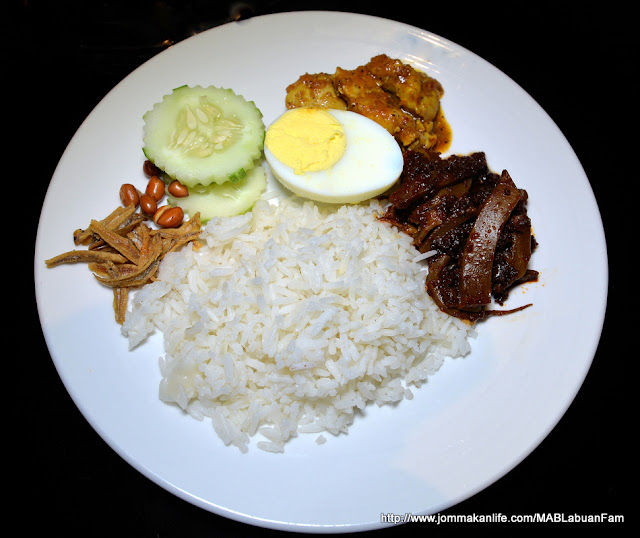 One of the perks available in the Golden Lounge is complimentary meals which are served piping hot. Of course, nasi lemak with sambal sotong and chicken rendang is inevitably on the menu but healthier, lighter options of yoghurt with cereal, fresh fruits and Danish pastries are served too. 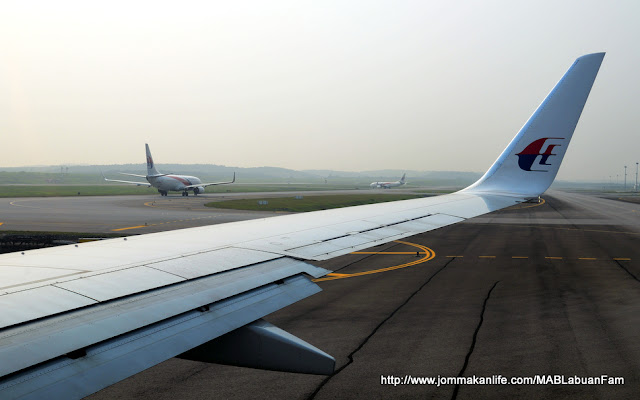 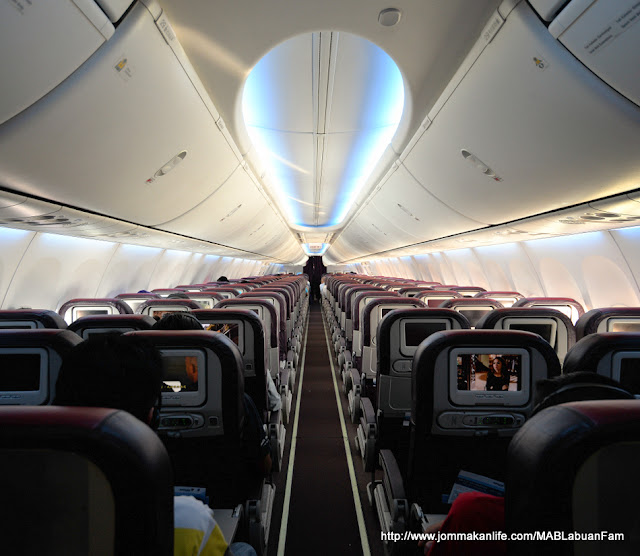 Once on board, the flight from KL to Labuan took about 2.5 hours. Things were pretty smooth after take-off and Pilot Parker popped up to inspect our snack boxes come meal time. Ah, he is truly a Malaysian at heart when it comes to food! 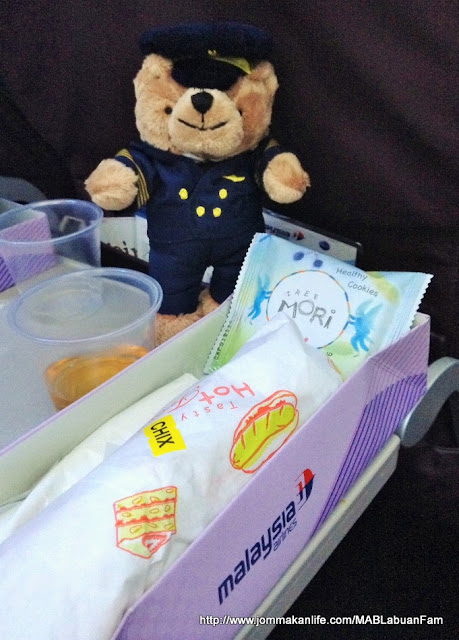 After scoffing my sandwich and cookie, I settled down to enjoy the in-flight entertainment and magazine available while Pilot Parker made himself comfy in my bag. All too soon it was time to touch down in Labuan. 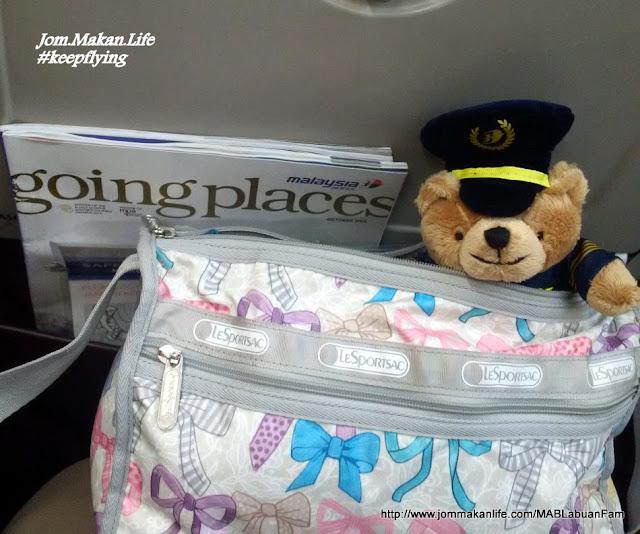 After a heartwarming welcome with some song and dance thrown in by the Dorsett Grand Labuan team, Pilot Parker joined us again for drinks at the Lobby Lounge for drinks and afternoon tea. 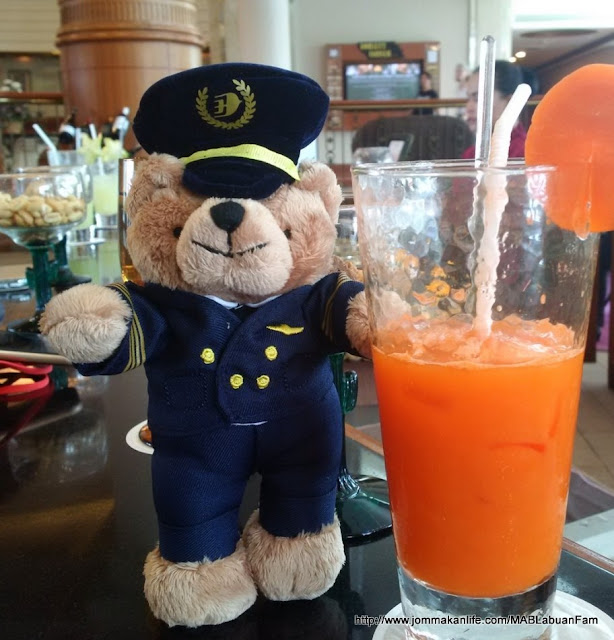 The overview of our Labuan staycation will be featured in upcoming blogposts so keep your eyes peeled for it. Let's just say Pilot Parker and me thoroughly enjoyed every minute of our weekend in Labuan...eating, drinking, hiking and doing loads of fun stuff with our amiable hosts from Dorsett Grand Labuan. 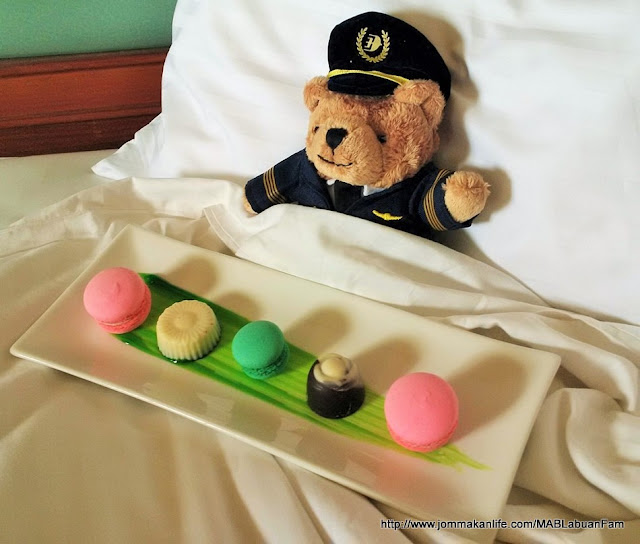 Just look at Pilot Parker tucked up in bed with a welcome platter of macarons and chocs! Now you know the kind of hospitality to expect when you fly MAB and stay at Dorsett Grand Labuan. 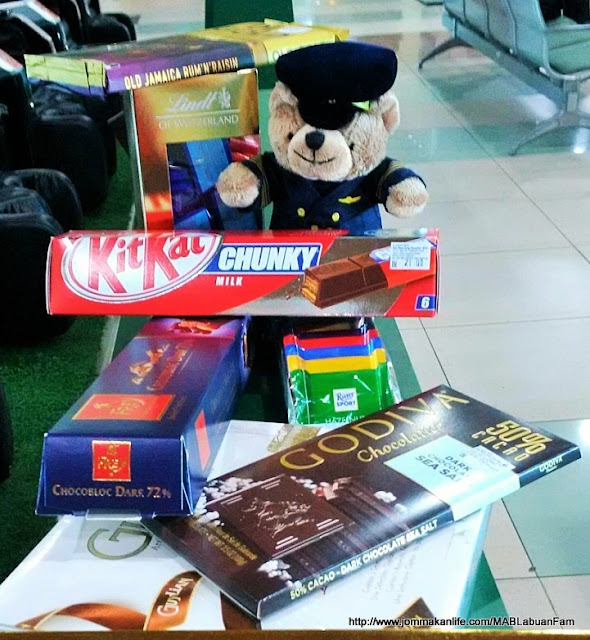 Btw, Labuan is a duty-free island so remember to make the most of it when you visit. Great buys include chocolates and giggle juice if you're into that. The stash lugged home by Pilot Parker should be a good indication of how sweet the deal is! 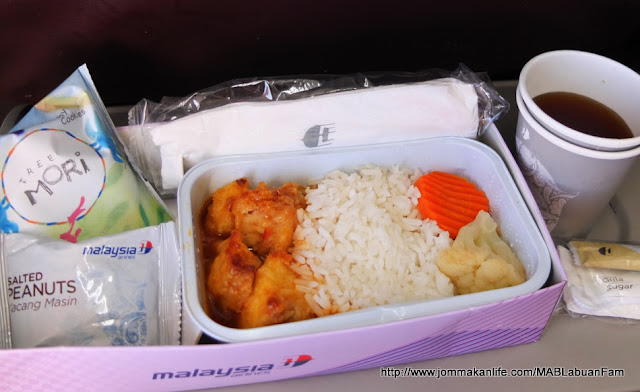 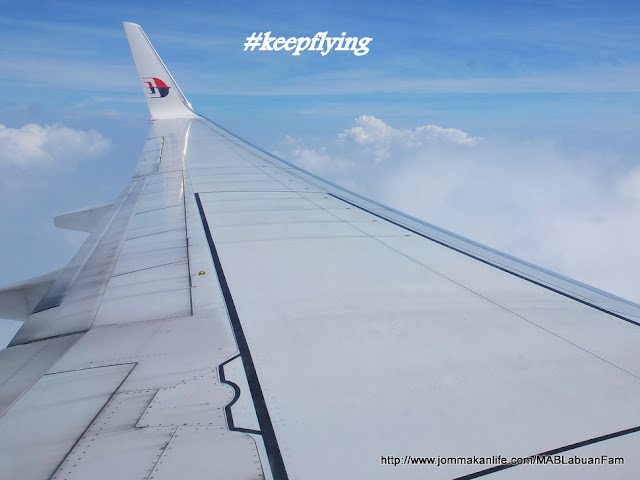