A JOINT CULINARY JOURNEY OF 88 YEARS AT THE ORIENTAL GROUP 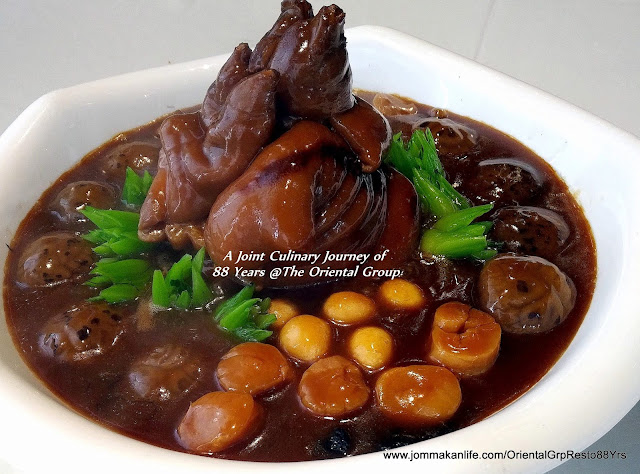 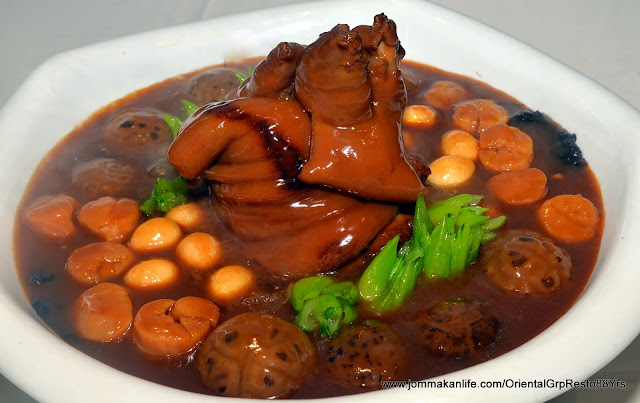 Silky on the palate, the salubrious and unctuous sauce is akin to a big, warm hug; a sheath of rich umami flavours on the tongue. The phalanx of textural interplay from the different ingredients succeeds in seducing our gastronomic senses. 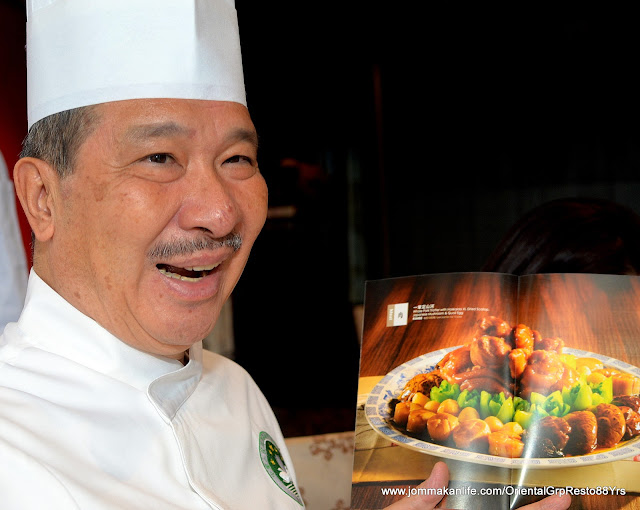 According to Chef Jacky Lam, one must have time, patience, painstaking efforts and meticulous preparation to bring the nostalgic dish to fruition. “Every component of the dish represents a certain element: the coin-shaped scallops represent money and wealth, vegetables – earth and country, mushrooms – treasures and fortune, quail eggs – people and citizenry, fatt choi (black seamoss) – law & order, and pork trotter for power and authority.” 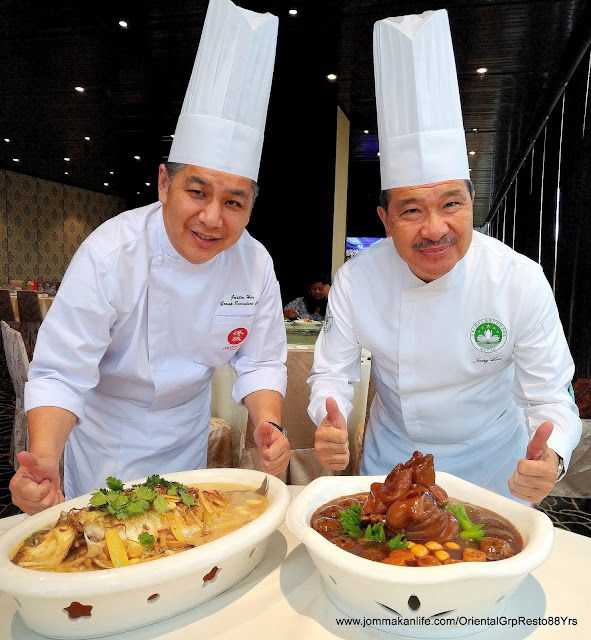 It is a most befitting dish to underscore the wealth of experience — a total of 88 years combined between the two sifu for The Oriental Group’s 11th Annual Guest Chef Grand Dinner series. Billed as A Joint Culinary Journey of 88 Years, The Oriental Group Executive Chef Justin Hor has teamed up for the second time with highly lauded celebrity veteran chef Jacky Lam to curate a special menu, to highlight Chinese cuisine at its best. 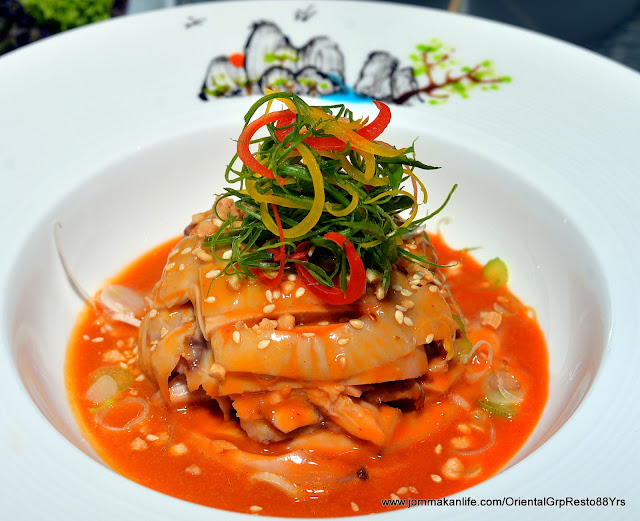 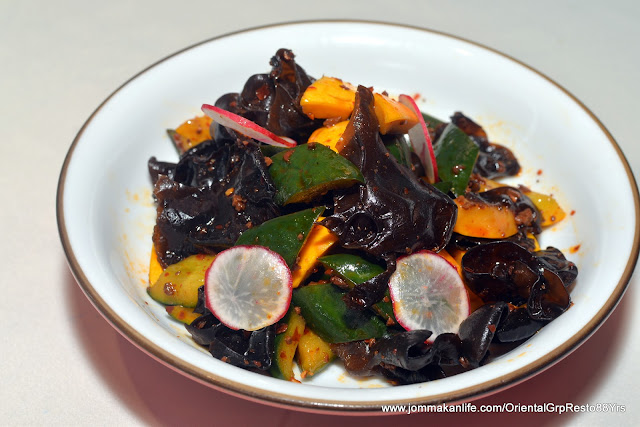 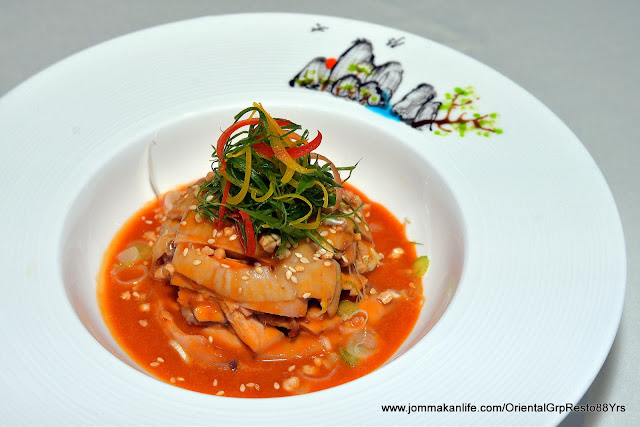 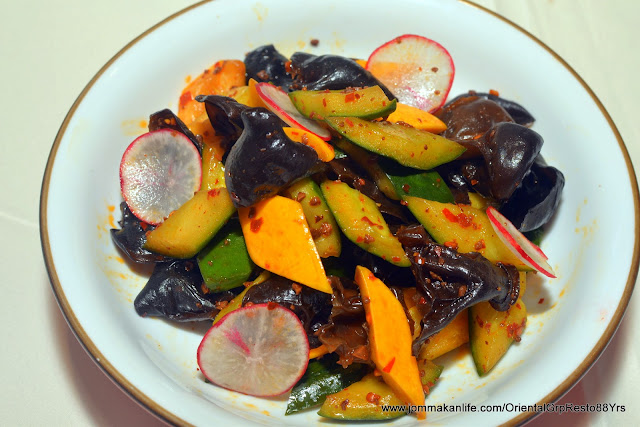 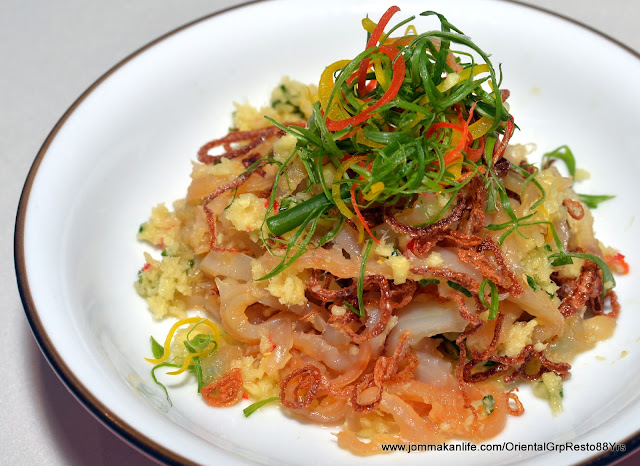 Having spent 6 months of R&D on the curated menu, every speciality we sample is on-point. My personal favourites are the crunchy strands of jellyfish smothered in minced Bentong ginger, spring onion and fried shallot, whilst the succulent pieces of poached chicken come lightly dressed in zingy-hot, mildly tongue-numbing Szechuan sauce flecked with sesame seeds. 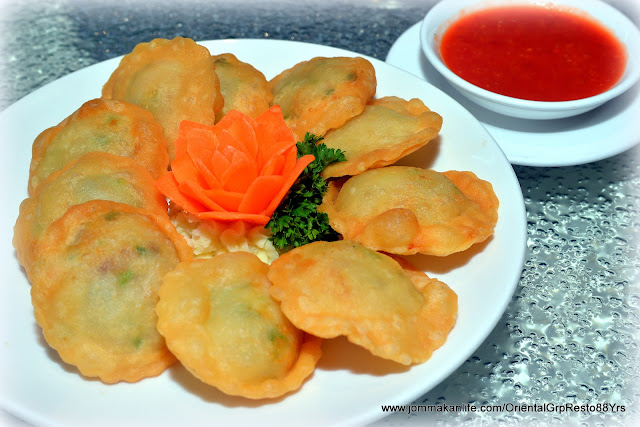 The sweetness of fresh crabmeat also piques our interest when we nibble on the deep-fried pockets of Macau Crab Meat Cake. Just a dab of the resto’s housemade chilli sauce raises its appeal to tantalising heights. 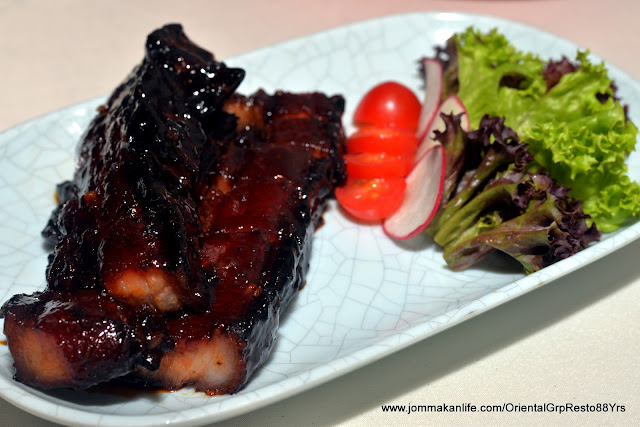 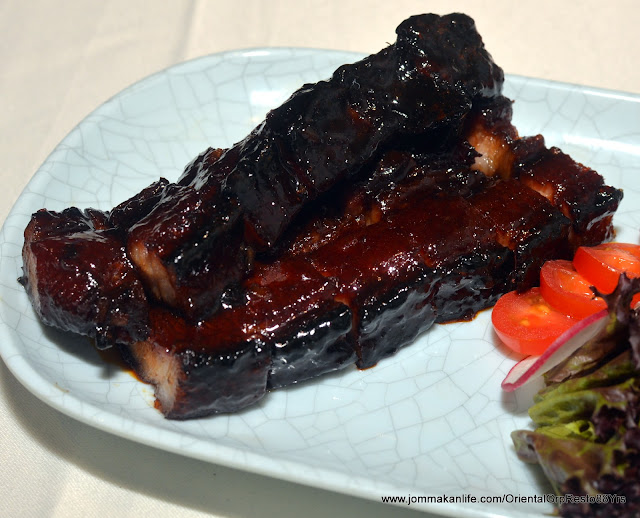 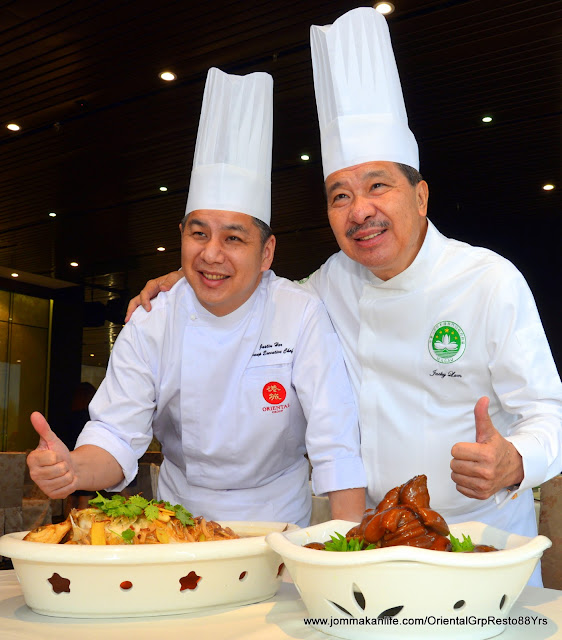 Chef Jacky Lam also regales us with his forays to remote mainland Chinese villages together with Chef Justin Hor, in their quest to seek new ingredients and culinary inspiration. Proudly showing us their rare find of aged choy poh (radish) which has been preserved for over 30 years, the chefs are effusive about its beneficial properties. 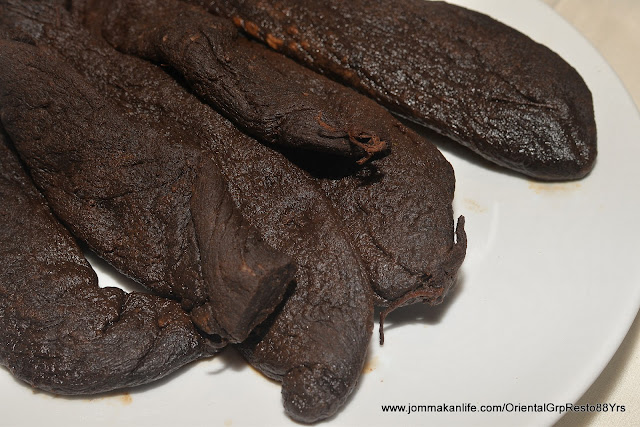 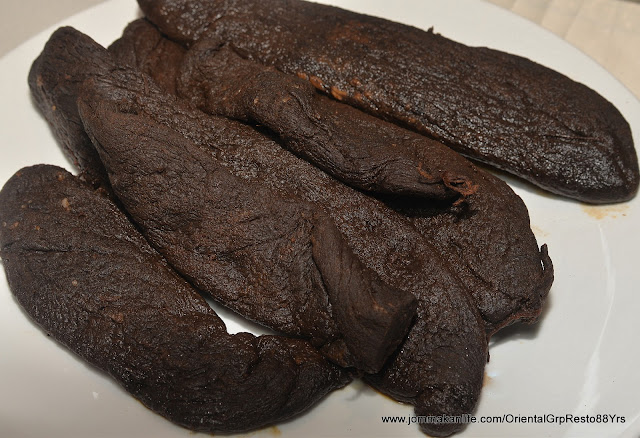 Writer David Yip noted in a 2015 issue of Gourmet & Travel magazine, choy poh is prepared by stacking radish in layers of sea salt. Heavy rocks are placed on top to squeeze out excess liquid. The radish is rinsed with brine and sun-dried until it turns golden brown. After the labourious months-long process, the radish is stored in earthen containers and taken out to dry every autumn. This turns it black gradually. 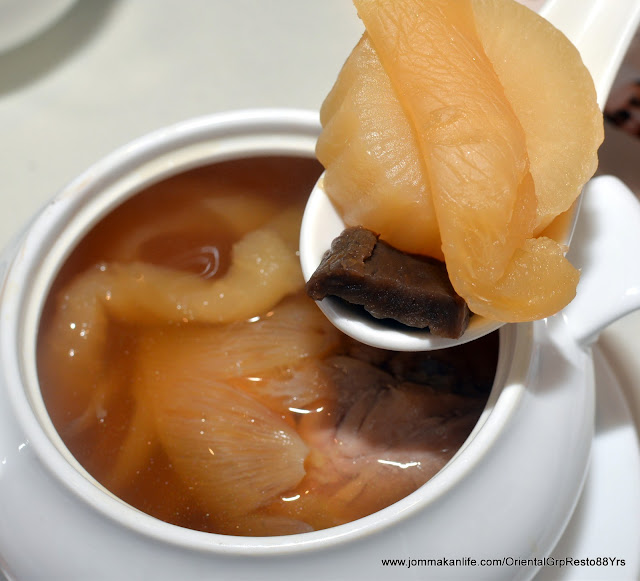 Both the preserved and aged choy poh play an integral role in enriching the Double-Boiled Superior Shark’s Fin Soup with Chicken and Preserved Vegetable (RM118 per person). The light, nutriet-rich broth which had undergone 3 hours of double-boiling, boasts distinct hints of muskiness with lingering traces of salty-sour nuances. Chefs Lam and Hor assure us it's as good and effacacious as drinking ginseng soup. 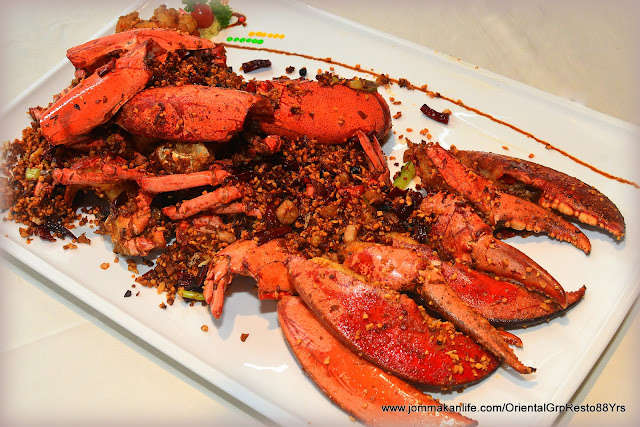 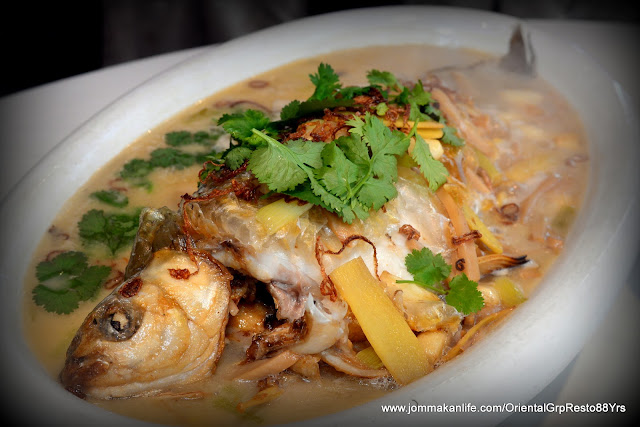 Finicky fish lovers will undoubtedly be reeled in by the prized catch of an Omega 3-rich Braised Sultan Fish Shunde Style (RM388 each). Complemented by eringi mushroom strips, sliced ginger, garlic pips, fresh coriander and  fried shallot, the fleshy fish tastes sweet and clear with subtle infusions of the aromatics. Even the thick, almost viscous sauce is slurpiliciously out of this world.
“There’s no short cut to any of these old-school dishes. If we want to savour nostalgic flavours, we’d have to be prepared to replicate what the old master chefs’ have done. Their methods exist for a reason so we cannot simply reinvent the wheel” says Chef Jacky Lam. 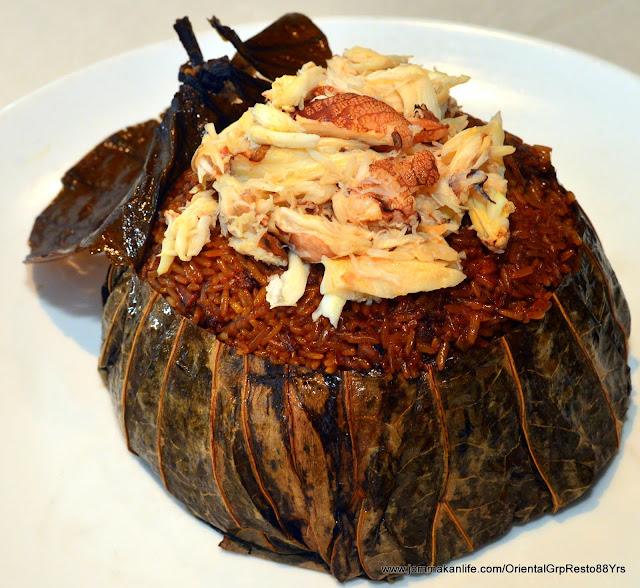 Ditto for the Lotus Leaf Treasures Rice (RM128 per portion for 10 persons). When the lotus leaf wrapper is unveiled, the rice grains are beautifully steamed and fluffy; whiffs of an enticing woodsy fragrance making our mouths water in anticipation. Freshly extracted crabmeat, dried prawns and assorted other ingredients make the rice so delicious and leaves us wanting more. 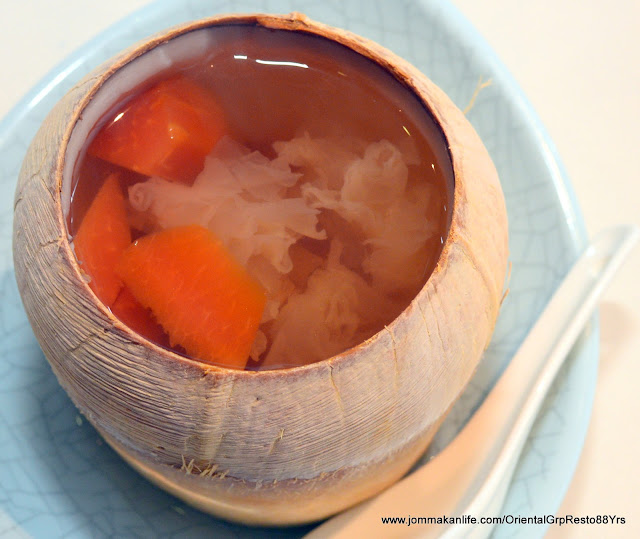 We resist from extra helpings though as there’s dessert to contend with. Not only does each of us gets treated to a substantial serving of Peach Resin with Snow Fungus & Papaya in Coconut (RM14 per person) but also two varieties of whimsical sweet dim sum. 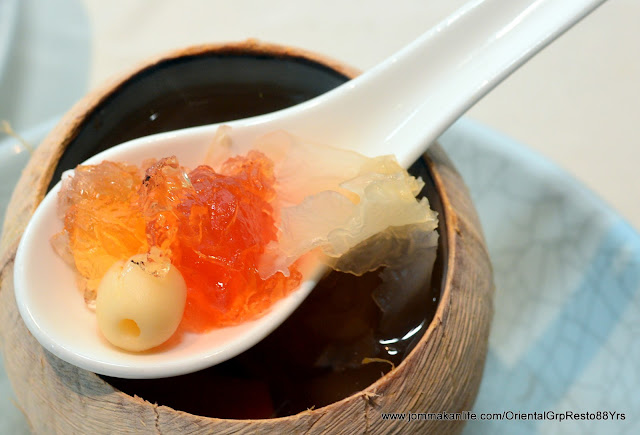 Made from a mixture of tapioca starch and glutinous rice flour, the realistic fruity replicas of Mangosteen Custard Lava (RM15 for 3 pcs) and corncob-shape Sweet Corn Lotus Paste (RM15 for 3 pcs) are a visual and palatable delight. 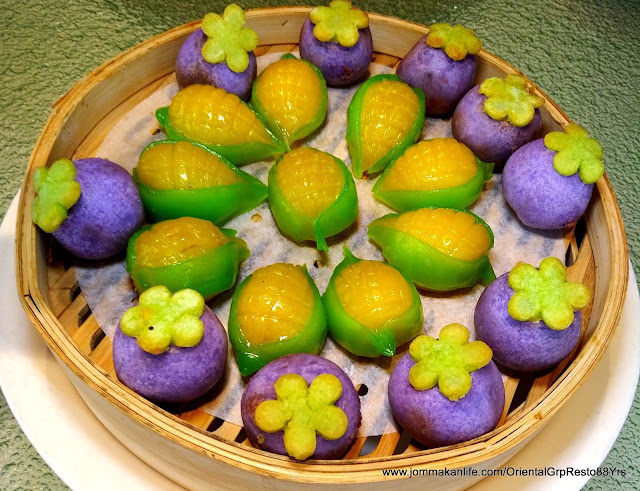 Amazing how one Chinese pastry skin can differ when deep-fried and steamed. The former has a nice crunch with a QQ texture when you bite into it whilst the latter is sticky-chewy-gummy. Talk about closing a masterful dining experience on a sweet, high note! 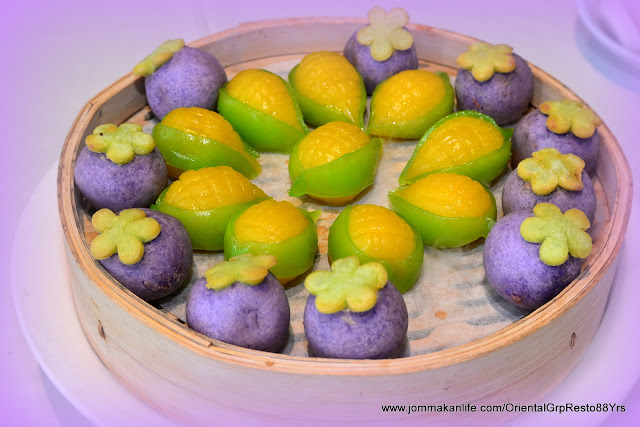